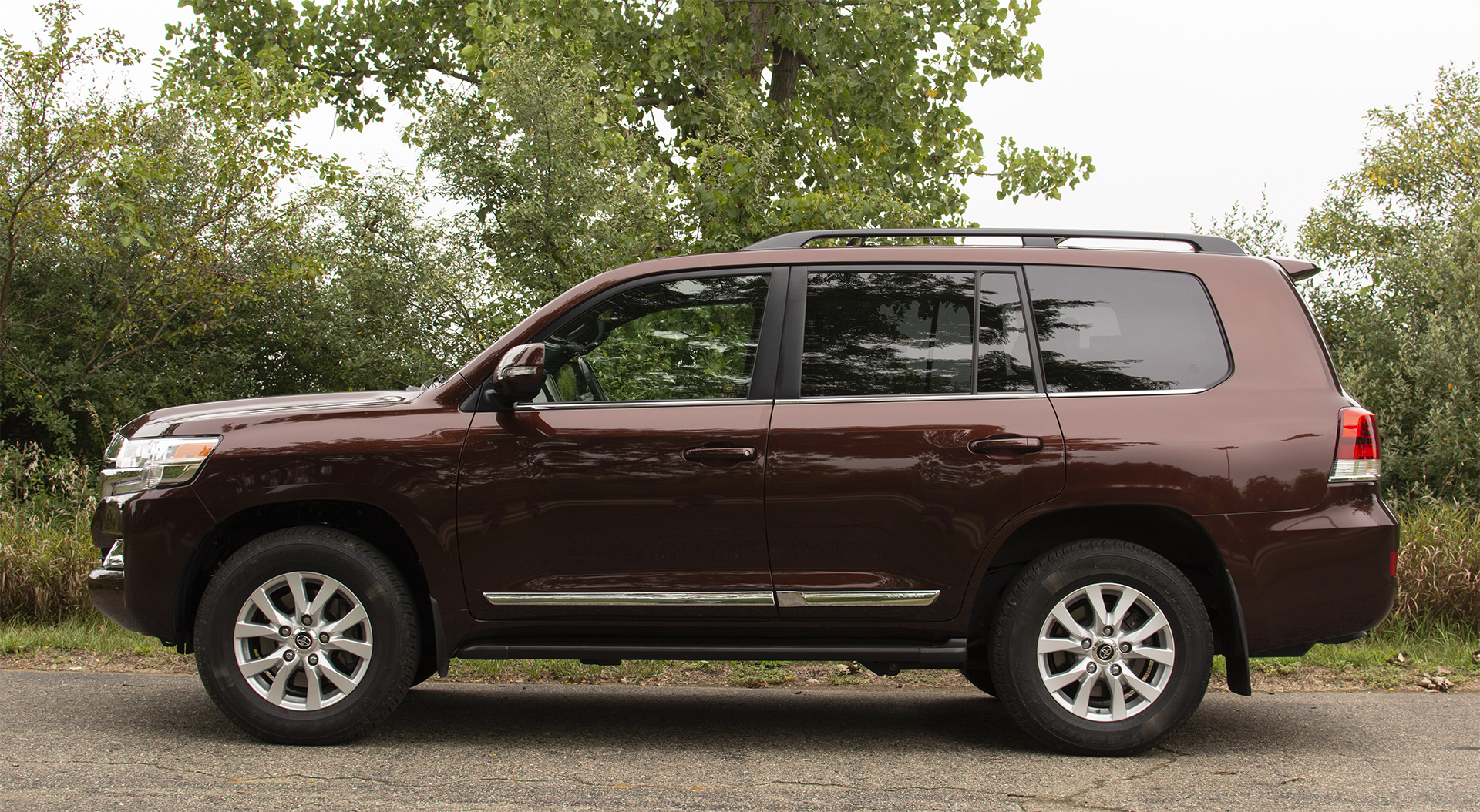 Toyotas and full-size SUVs are the longest-lasting vehicles that are most likely to reach 200,000 miles or more, according to a new study by automotive research firm and car search engine iSeeCars.com .

iSeeCars analyzed over 11.8 million cars sold in 2020 to determine which models best demonstrate longevity and reliability with the highest percentage of cars reaching 200,000 miles.

“Toyotas account for the majority of the top ten longest-lasting cars and is the most represented automaker, which validates the brand’s reputation for building enduring and reliable vehicles,” said iSeeCars Executive Analyst Karl Brauer. “While trucks and truck-based SUVs dominate the list, two Toyota hybrids and the Avalon sedan also make the list, confirming there is a reliable Toyota available for a wide range of consumers.”

The top 16 models identified each have over 2.5 percent of their vehicles (more than two-and-a-half times the overall average) reach 200,000 miles, and include a mix of vehicle types with 10 SUVs (including a hybrid), three pickup trucks, one sedan, one minivan, and one hybrid hatchback.   Two Toyota full-size SUVs occupy the top spots including the first-ranked Toyota Land Cruiser and the second-ranked Toyota Sequoia. These truck-based SUVs occupy the top spots by a wide margin, with the Sequoia twice as likely to reach 200,000 miles as the next ranked car on the list. “The iconic and indestructible Toyota Land Cruiser is engineered to last at least 25 years, even under the harshest of driving conditions, as it is relied upon in many developing countries where off-road driving is the norm,” said Brauer. “And like the Land Cruiser, the truck-based Toyota Sequoia has the durability of a pickup chassis with three full rows of seating for up to eight passengers, making it a capable family hauler that is able to endure high mileage and tow heavy loads.”

Six American full-size SUVs make the list, including the third-ranked Chevrolet Suburban, the fourth-ranked Ford Expedition, the seventh-ranked Chevrolet Tahoe, the tenth-ranked GMC Yukon XL, the twelfth-ranked GMC Yukon, and the fifteenth-ranked Lincoln Navigator. “All manufactured by General Motors, the Chevrolet Suburban, GMC Yukon, GMC Yukon XL, and Chevrolet Tahoe share a platform and many common parts, which helps explain why these popular family vehicles are all likely to last 200,000 miles,” said Brauer. “Similarly, the Ford Expedition and the lone luxury car on the list, the Lincoln Navigator, also share the same manufacturer and chassis, though the Navigator is under Ford’s Lincoln marque and has more premium features and higher-quality interior materials.”

Toyota accounts for the two midsize SUVs to make the list of longest-lasting vehicles, including the fifth-ranked Toyota 4Runner and the eighth-ranked Toyota Highlander Hybrid. “The truck-based and off-road capable Toyota 4Runner provides ample cargo room and has an optional third row for those who want a rugged family hauler,” said Brauer. “The crossover Toyota Highlander Hybrid offers a spacious third-row of seating to provide a more fuel-efficient alternative to traditional gas-guzzling family vehicles, and owners have the added incentive to drive the car further to take full advantage of its fuel savings to offset the added upfront cost of its hybrid technology.”

Ranked sixth is the Toyota Avalon, which accounts for the only sedan on the list and is the vehicle to climb the most spots on the list, jumping from last year’s thirteenth-ranked longest-lasting vehicle. “The Toyota Avalon is consistently at the top of its class for vehicle quality and reliability, which explains why people are keeping them for longer than ever,” said Brauer. “The Avalon provides a spacious interior and serves as a capable and comfortable alternative for those who want a reliable family hauler but don’t require the expansive cargo space of a large SUV or minivan.”

Three pickup trucks make the list including the ninth-ranked Toyota Tundra, the tenth-ranked Honda Ridgeline, and the fourteenth-ranked Toyota Tacoma. “Known for being indestructible, the Toyota Tacoma and the Toyota Tundra offer trademark Toyota quality and reliability,” said Brauer. “The Honda Ridgeline’s unique unibody design gives it the function of a pickup truck with the ride comfort and fuel efficiency of a crossover SUV, making it one of the most flexible, multi-purpose vehicles you can buy.”

The lone minivan on the list is the thirteenth-ranked Honda Odyssey, which represents the vehicle segment most commonly associated with family hauling. “Minivans generally offer more cargo space, better gas mileage, and added convenience features when compared to family-friendly SUVs, but most of them lack all-weather performance,” said Brauer. “The Honda Odyssey consistently earns the distinction of being at the top of its class thanks to its handling, functionality and safety features, allowing it to rack up mileage as a trusted family hauler.”

Rounding out the list is the sixteenth-ranked Toyota Prius. “The Prius attracts practical buyers who keep their vehicle on the road as long as possible to take advantage of its low maintenance costs and fuel efficiency,” said Brauer.

When analyzing which light-duty pickup trucks are most likely to reach 200,000 miles, six pickups rate above the 1.9 percent average for the vehicle class.  Three additional longest-lasting pickups join the top-ranked Toyota Tundra, the second-ranked Honda Ridgeline, and the third-ranked Toyota Tacoma.

“On average, pickup trucks are almost twice as likely to reach 200,000 miles with a 1.9 percent average for the segment, which is nearly double the average for all vehicles,” said Brauer. “Pickup trucks are commonly used as work vehicles and are likely to accrue more miles than a typical passenger car while often benefitting from more consistent preventative maintenance and necessary repairs.”

Ranked fifth is the Chevrolet Silverado 1500 full-size pickup, while its mechanically identical GMC Sierra 1500 ranks seventh and falls just below the segment average. “The Chevrolet Silverado is more of a working truck, while the GMC Sierra markets itself as a premium vehicle,” said Brauer. “As a result, the Silverado likely logs more miles as a utility device , though the Sierra still fares well above the overall vehicle average.”The full-size Nissan Titan ranks fourth. “Nissan has aggressively courted truck buyers in recent years, and the Titan’s long-distance reliability confirms the company’s effort to produce a durable work vehicle,” said Brauer.

The last full-size pickup that is more likely than the average pickup to reach 200,000 miles is the sixth-ranked Ford F-150. “The Ford F-150 has been America’s most-popular vehicle for over 40 years, and its popularity with consumers and fleet buyers is a testament to its reliability and longevity.”

“Along with setting the standard for reliability and durability, Toyotas and Hondas also have lower-than-average ownership costs,” said Brauer. “Owners are more likely to keep their vehicles on the road if they are performing well and don’t need costly repairs.”

The remaining brands that fared above average are all American with Chevrolet ranking third, Cadillac ranking fourth, GMC ranking fifth, Ford ranking sixth, and Ram ranking seventh. “The majority of the longest-lasting SUVs and pickups are American vehicles from these brands, which helps contribute to their above-average ranking on this list,” said Brauer. “Three General Motors brands all rank closely at the top, which shows that although their vehicles target different consumer types, they are consistently reliable.”

“Although full-size SUVs and pickup trucks are the vehicles most likely to reach 200,000 miles, there are still options for consumers who want an enduring vehicle outside of these categories, including sedans and hybrids,” said Brauer. “It’s also important to know that regardless of the vehicle, proper maintenance and care is the best way to extend how long a vehicle stays on the road.”

iSeeCars.com analyzed over 11.8 million pre-owned cars sold in 2020. Models that were not in production as of the 2021 model year, heavy duty-vehicles, and low-volume models were excluded from further analysis. For each model, the percentage of the number of cars with at least 200,000 miles was mathematically modeled.

iSeeCars.com is an online car search engine helping consumers find the best new car and used car deals by providing key insights and valuable resources, like the iSeeCars free VIN check report. iSeeCars.com has saved users over $268 million so far by applying big data analytics powered by over 25 billion (and growing) data points and using proprietary algorithms to objectively analyze, score and rank millions of cars and thousands of dealers. Based in the Boston area, iSeeCars.com was founded by former TripAdvisor and SAP executives determined to improve the car shopping experience for consumers.