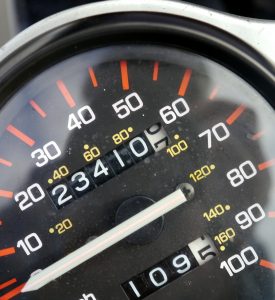 When it comes to car buying, you want your new-to-you used car to give you thousands or tens of thousands of miles of trouble-free transportation. And common sense seems to suggest that the fewer miles a used car has, the longer it will faithfully serve you.

But is this an absolute truth? Is the lower-miles-equals-better-car correlation a hard-and-fast rule to live by? The real answers to these questions are a bit more nuanced than it seems at first blush. Exceptions exist, and they’re not always apparent.

All this begs the obvious question: how many miles should a used car have, anyway?

To give you a better sense of what might be the ideal mileage for a used car – and why that’s a tough metric to measure – and when a high-mileage car might be the better buy, we’ve done the research and flushed out the facts. All the following is worth keeping in mind the next time you’re scrutinizing an odometer at your local dealership:

All cars get driven, but the line between used and abused is a fine one. Some owners are so fanatical they’ll keep every receipt pertaining to their car, be it oil changes, gas fill-ups, or car washes. Others will only be aware of the need to service their car when warning lights start flickering on the dash.

Most people will fall into the spectrum between those two extremes. But when there are two similar cars with different mileage, you should go for the better maintained car rather than the lower-mile car. Of course, there’s a limit to this – a car with 30,000 miles is superior to one with 300,000 miles. But if the gulf in mileage is only ten or twenty grand, would you rather the lower-mile neglected car or higher-mile pampered one?

To get a sense of maintenance history, the best resources are actual receipts for services performed or a log of repairs done. If these maintenance records are not available – and it’s not unusual if they aren’t – a Carfax vehicle history report will disclose any known service record history in its report. It will also call out any prior accidents, which is something else you want to avoid no matter the mileage. Feeling confident about a car’s history might be more important than any other factor, including the number of miles showing on the odometer.

And don’t discount the simple act of peeking under the hood. If you pull the dipstick and see oil that’s dark and sludgy, it’s overdue for a change. Cracked belts and hoses are also probably past their prime. Murky coolant is equally concerning. All these signs point to poor maintenance and excessive wear and tear, and that can mean added headaches down the road (if you want a more comprehensive guide to inspecting a used vehicle, see what to look for when buying a used car).

On the flip side of all this is disuse. Sometimes a car hardly gets any use at all, and spends most of its life collecting dust in some garage. Eventually, when this car hits the market, the seller will likely try to get top dollar thanks to its abnormally low mileage.

On the face of it, it seems like the premium might be worth it – how often can you find a like-new example of an old, discontinued car? For those who swear by a certain product – think loyal Town Car buyers or diesel truck buyers – such a find looks like a godsend.

But there’s a catch. When a car sits for prolonged period of time, certain parts will break down. Rubbers, seals, and gaskets are a perfect example of this –when enough time passes these pliable components will turn brittle and become ineffective regardless of usage. It’s not uncommon for an unusually low-miles car to spout leaks after suddenly being pressed into daily service, thanks to these rubber parts failing.

The irony here is that if the car had been driven regularly, this might not have been an issue – the thermal expansion and contraction process when an engine is run, along with the light lubrication of any passing fluids, may have prolonged the deterioration of these rubbers.

This particular concern is only relevant for older but very low-mile cars – think a ten-year old car with only 30,000 or less miles on it. These are rare finds, and might still be worth buying if you have a soft spot for a certain make and model, but be wary about potential costly fixes that may be hiding in an underused car.

You also want to be wary of a newer car that has accumulated mileage far beyond the national yearly average of 12,000-15,000 miles a year. Any car that sees such serious annual mileage means the driver was doing some hefty seat time. It’s inevitable that racking up miles at such a clip means more maintenance will be needed sooner.

You might be able to pick up a higher-mile car for cheaper, but it also means you’re that much closer to major servicing for things like timing belts, cooling systems, and brakes. Servicing these systems aren’t cheap – and it’s spending that can be deferred if you buy a lower-mile car.

How Old of a Used Car Should I Buy?

At a certain point in a car’s life, unexpected repairs will begin occurring with increasing frequency. There’s no hard age or mileage at which this happens, but often enough it occurs around when the car is 8-10 years old and 100,000-120,000 miles. This is inevitable – the engineers can’t build cars to last forever. If there’s a certain age or mileage to avoid, it’s the decade-old car whose odometer reading is already displaying six figures.

Mileage and vehicle age are indelibly tied together, but just like mileage, there is no single right answer as to what’s a good age for a used vehicle. Generally you want the newest car you can afford in your budget. But the usual used-car considerations persist – if there’s a car that’s a year or two older than you would like but was maintained well and never in an accident, it’s a better buy than a newer car that has been in an accident or poorly maintained. As always, overall condition is paramount.

Another thing to consider is the type of mileage a car has accumulated. For instance, a car that’s sold new in a New York City borough will have a much rougher life than one sold new in, say, rural Arizona. Why? That New York car will be banging over potholes and swerving past traffic in its rush to go stoplight to stoplight. The Arizona car will likely be doing serene cruising on the smooth asphalt that ribbons through the desert.

In all likelihood, the car in spacious Arizona will rack up a good bit more miles than its NYC counterpart. But those desert miles represent good mileage: mileage that accumulates with a certain ease not found in city driving. The reason for this is the same reason why sellers love to boast about highway miles in their advertising: an open road with no turns to contend with or stoplights to brake for is the least stressful scenario for an automobile. It is also the scenario the racks up mileage the fastest.

City cars that aren’t taxicabs or rideshare vehicles will likely go well below the national yearly average of 12,000 miles a year. But they’ll wear out faster thanks to the nature of urban conditions versus cars that largely see long highway trips.

Mileage should be considered as one important factor among many important factors when car shopping. You want the lowest mile car you can get that has been properly maintained, never in an accident, and used regularly. Sometimes this combo means passing up on the lowest-mile car you find. That’s OK. More miles won’t kill a car, but prior neglect will.

Shop smart and buy the nicest car you can find, and you’ll get many thousands of miles of happy motoring.

If you’re ready to start the car buying process, you can search over 4 million new and used cars with iSeeCars’ award-winning car search engine that helps shoppers find the best car deals by providing key insights and valuable resources, like the iSeeCars VIN check report.