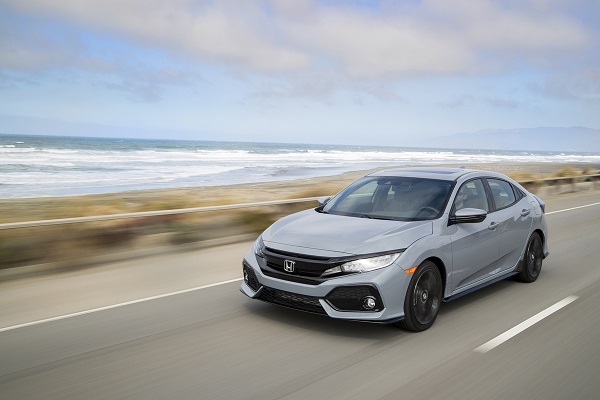 The average price of a new car is $36,222. However, there are plenty of quality new cars that cost less than average at under $30,000. Or, you can stretch your money even further by purchasing a lightly used car.

Taking the top spot as the best new car under $30,000 is the Honda Civic, which carries a long tenure as the most popular compact car in America. The versatile Civic, which is available as a sedan, hatchback, or a sporty coupe, is fun and comfortable to drive and earns high safety and fuel efficiency scores. It also earned top ranking on our list of Best Commuter Cars thanks to its practicality and efficiency. It has a 2.0-liter four-cylinder engine with 158 horsepower fromin its base model engine, while a 1.5-liter turbocharged engine is available on higher trims including the Honda Civic Si performance variant. While the starting price of a Honda Civic is $20,800, the Civic Si starts at $25,200 for drivers who want more performance.

The Civic comes standard with front-wheel drive and a six-speed manual transmission, while a continuously variable automatic transmission (CVT) is also available.

Ranked second is the Toyota Prius hatchback. It has an abundance of cargo room as well as impressive safety scores. As a hybrid, it also has excellent fuel economy with an EPA rating of 52 mpg (combined).

It comes standard with a 7-inch touch screen infotainment system and a number of standard active safety features including a rearview camera, adaptive cruise control, lane departure warning, road sign recognition, and forward-collision warning. With all its features, reliability, and efficiency, it’s no surprise that we named the Prius #1 on our list of Best Hatchbacks,

Joining the compact Civic is the third-ranked midsize Honda Accord. Just like its smaller counterpart, the Accord is available as a coupe or sedan and earns high safety scores. It comes standard with a manual transmission, while a six-speed automatic and a continuously variable automatic transmission is also available on higher trim levels. The Accord has a starting MSRP of $24,270, while the top-of-the-line Touring trim starts at $36,400.

Coming in at fourth and fifth are the Toyota Camry and its hybrid counterpart. Both models are praised for their comfortable ride quality and nimble handling. The Camry also has above-average cargo space for its class.

The first SUV to make the list is the sixth-ranked Honda CR-V. The CR-V compact SUV provides spacious seating and class-leading cargo room, as well as excellent fuel efficiency. The front-wheel-drive version earns  28 mpg city and 34 mpg on the highway, while all-wheel-drive versions achieve 27 mpg in the city and 32 mpg on the highway. The CR-V comes with a suite of active safety features including forward-collision warning, adaptive cruise control, lane departure warning, and automatic high-beam headlights.

The Hyundai Santa Fe for the 2015 model year ranks seventh. It is among the best-rated midsize SUVs in its class and comes in both two- and three-row configurations. It has a refined cabin and boasts many tech features like proximity key entry and a push-button start.

The eighth-ranked Toyota Corolla compact car earns Toyota’s characteristic excellent reliability rating. It provides drivers and passengers with a comfortable ride and boasts impressive MPG ratings. It also comes with a suite of advanced safety features including lane keep assist, lane departure warning, and forward-collision warning. It is available as a four-door sedan or as a hatchback.

Ranked ninth is the Mazda Mazda6 midsize sedan. With its high-quality interior and upscale finishes, the Mazda6 feels like a luxury car. Its higher trims offer synthetic or genuine leather upholstery, heated rear seats, ventilated front seats, and a heated steering wheel. It is also fun to drive and has abundant head- and legroom.

Ranked tenth is the Subaru Forester compact SUV. Despite its “compact” designation it offers abundant cargo room. If features high ground clearance yet drives as comfortably as a car, with responsive steering and braking. It also comes standard with all-wheel drive. The Forester starts at $24,495, while the higher trims exceed the $30,000 mark. It’s highest trim that falls below our target price point is the Sport model, at $28,995.

The eleventh-ranked Mazda Mazda3 also earns the top distinction on our list of the Best Compact Cars thanks to its driving dynamics, classy interior, and sporty styling. Like its larger counterpart the Mazda6, it is fun to drive and boasts excellent steering and braking. While front-wheel drive is standard, all-wheel drive is also available. The Mazda3 has a base price of $21,500, while its top trim costs $26,500 for the sedan and $27,500 for the hatchback.

Buying a lightly used car expands your options for purchasing a vehicle under $30,000. By opting for a gently used three-year-old car, you can purchase a modern car that has already taken the bulk of its depreciation hit. With practicality in mind, here are the best used cars in the $20,000 to $30,000 range.

Ranked first is the Toyota Avalon, which is the longest-lasting sedan. The full-size sedan has a powerful V6 engine and offers a smooth and comfortable ride. It also has a classy interior with high-end finishes that rival luxury cars. A used Toyota Avalon has an average price of $22,691.

Ranked second is the Honda Pilot midsize SUV. With more cargo space than its competitors, including a spacious third-row seat suitable for adults, it is a popular choice for a family vehicle. It also has family-friendly features and earned the highest safety designation of Top Safety Pick+ from the IIHS. The average price of a 2017 Honda Pilot for sale is $28,292.

Ranked third is the Toyota Highlander. The midsize crossover offers three rows of seating with a third row that provides more space than average for the class as well as perfect safety scores. It comes standard with many safety features such as forward collision warning and braking, pedestrian detection, and adaptive cruise control. A used Toyota Highlander costs an average of $28,456.

Ranked fourth is the Dodge Durango midsize SUV. The Durango provides three rows of seating with ample cargo and passenger room. Drivers can choose from two powertrains: a 290-horsepower V6 engine or a brawny 360-horsepower V8. A 2017 Dodge Durango for sale can be found for an average price of $26,664.

Ranked fifth is the Jeep Grand Cherokee, which appeals to rugged and refined drivers alike. A V6 engine comes standard, while a powerful V8 is available on higher trim levels. A used Jeep Grand Cherokee costs an average of $26,869.

Ranked sixth is the Ford Explorer midsize SUV, which comes with three rows of seating. The Explorer comes standard with a four-cylinder engine, but a twin-turbo EcoBoost V6 is also available. A 2017 used Ford Explorer costs an average of $26,297.

Ranked seventh is the only luxury car on the list, the compact Lexus IS 300. The small car offers a luxurious interior and a comfortable ride. It comes standard with advanced safety features including lane departure warning, lane keep assist, and automatic high-beam headlights. A three-year-old used Lexus IS 300 for sale costs an average of $27,061.

Ranked eighth is the famed two-door off-road vehicle, the Jeep Wrangler. While it doesn’t provide the comforts of most family-friendly SUVs, it appeals to drivers with rugged pursuits. A removable soft cloth top comes standard, while a removable hardtop is available. And with its high resale value, it is a smart purchase decision. A 2017 used Jeep Wrangler costs an average of $26,011.

The consummate muscle car, the Dodge Charger is among the best new and used sports cars under $30,000 with a starting MSRP of $29,995. The Dodge Charger comes standard with rear-wheel drive and a 3.6-liter V6 with 300 horsepower and 260 lb-ft of torque. Higher trims provide more powerful V8 options. Purchasing a used Dodge Charger for sale costs an average of $25,557 and will likely allow you to purchase higher trim levels and performance packages without breaking the $30,000 price threshold.

The Mazda MX-5 two-seat roadster is fun to drive and boasts a stylish interior. With a starting MSRP of $26,580, you can purchase a brand new one or a lightly used Mazda Miata for below the $30,000-mark.

The Ford Mustang classic sports car has been in continuous production since 1964 and has become an American icon. A new Ford Mustang has a starting MSRP of $26,670, and purchasing a lightly used Ford Mustang can afford you higher trims for under $30,000.

The Chevrolet Camaro is another classic American sports car that comes with V6 and V8 engine options. This fun-to-drive car has a starting MSRP of 25,000, with high-end trims topping off at $69,000. A lightly-used Chevrolet Camaro can be well under the $30,000 mark.

If you are buying a car, a budget of $30,000 gives you a lot of options for both reliable new and lightly used cars. If you choose to buy a used car, be sure to always get a vehicle history report such as Carfax or Autocheck and have it inspected by a trusted mechanic. Additionally, be sure to check out the iSeeCars VIN Check report that provides you with all the information you need to decide if a used car is a smart purchase decision.

If you’re interested in a new car or a used car, be sure to check out iSeeCars’ award-winning car search engine. It uses advanced algorithms to help shoppers find the best car deals across all vehicle types and provides key insights and valuable resources, like the iSeeCars VIN check report. Filter by make, model, price, and special features to find the best deal on your next vehicle.