Best Cars to Buy New and Used
The Fastest-Selling New and Used Cars in February
Longest-Lasting Cars to Reach 200,000 Miles and Beyond
Which Used Teslas Saw the Highest Demand in January?
New Cars With the Most Excess 2020 Inventory
See more studies...

What's the price of a Honda Civic by year?

How can you save money on a used Honda Civic?

Does car color affect the price of a used Honda Civic?

What is the average price for Used Honda Civic? How many are for sale and priced below market?

What Honda Civic model year and mileage can you get for your budget?

What's the price of a Used Honda Civic by year?

Where to find a cheap Honda Civic ?

How to save money when buying a used Honda Civic ?

What colors are the best deals for a Honda Civic ?

What Honda Civic color has the best resale value ?

What is the best time to buy a used Honda Civic ?

Honda Civic Rankings vs. the Competition

What Is The Average Price Of A Used Honda Civic By Model Year?

What Is The Average Price Of Competitor Cars To The Used Honda Civic?

What Is The Average Price Of Used Honda Civic In The Top 10 Cities? 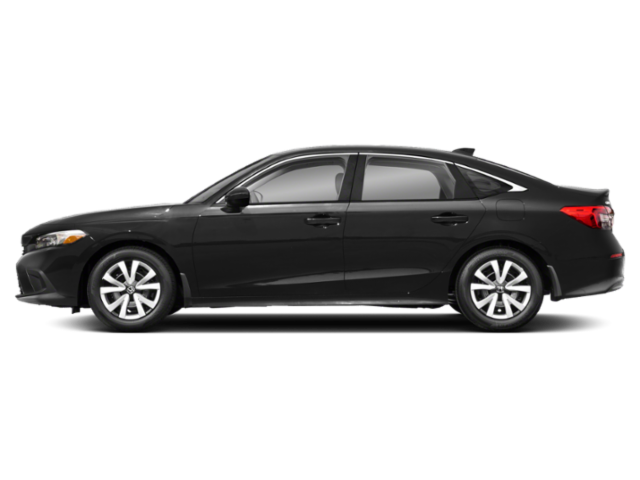 The Civic is one of the longest-running cars in the Honda lineup of vehicles and is one of the company's best-selling vehicles. A leader in the subcompact segment, the Civic entered the market in 1972 and has gone through ten generations since, with the tenth generation introduced for the 2016 model year. The Civic has earned a reputation for quality, dependability, and sportiness.

It is not unusual to see a Honda Civic that is ten or more years old retaining good market value despite age and high mileage. Currently, the used market is reflected in iSeeCars listings with tens of thousands of used Civic cars being available around the country.

Most of these used Honda Civic cars are of the 7th, 8th, and 9th generations (2001-2015 model years) in both coupe and sedan models. When looking at a used Civic inside these years, check for the usual items that should be inspected in a used car. The older it is, the more the chassis and body should be checked for wear and damage. With most Honda Civic models, however, the best indication of a car that will continue to be a reliable, fun-to-drive vehicle is in maintenance records and history. A well-maintained Civic will provide many years of excellent service.

Buyers should also be aware that it's not unusual for a used Honda Civic to have been modified in the aftermarket to enhance bodywork and improve street racing performance. This could adversely affect fuel economy in the Civic, but may improve appearance or resale value.

A quality, used Honda Civic can be found relatively easily given the robust nature of the car and its popularity as a new vehicle purchase.

The Honda Civic is a midsize coupe, sedan, or hatchback offered in many different flavors for different buyers. Our review will focus on the mainstream Civic trims and leave the high-performance Si and Type R Civic trims for the enthusiast magazines to drool over.

The Civic is a top-selling vehicle in America. That reality is even more meaningful due to the fact that the Civic is not given away to rental fleets by the thousands, like some of its peers in the segment. Rather, Honda targets real owners and real families with its Civic line. This bolsters resale value and makes the vehicle more valuable when you decide it's time to trade or sell on.

Civics start just under $22K including the destination fee. Well-appointed trims can top $30K. We recently tested the $30,155 five-door Hatchback Sport Touring trim. Each of the body styles has multiple trim levels and follows a progression of content as prices climb. Please note that for the most part, our review here will apply best to the mid to top trims in the Civic, which reflect the trims we have recently tested.
See the full 2020 Honda Civic Test Drive Review.

The 2019 Honda Civic is a compact/midsized car that serves multiple buyer groups. Available in three body configurations, coupe, sedan, and five-door hatchback, the Civic is a broad line of car that sells in huge volumes. In fact, Honda likes to point out that the Civic is larger in sales than many entire vehicle brands in the United States.

The Civic resides in a segment that is growing less and less competitive by the day. Mostly due to the Civic's dominance. The folks at GM, Ford and Dodge, have quit. They won't be making their models anymore. Apparently, their formula was not profitable. Honda's is, and that formula involves making the U.S. Civic mostly in America. The hatchback is imported.
Like all great family cars, the Civic checks off a lot of boxes. Spare tire - check. Great safety ratings - check. High value for the dollar - check. Outstanding fuel economy - check. The Civic can also come in sporty trims. With a price point from the low $20Ks to the high $20ks for all but the exotic Type R trim, the Civic is in the perfect sweet spot to work with a lot of budgets.
We have tested three different trims and two of the body styles of the latest Civic, most recently the $28,220 Touring
See the full 2019 Honda Civic Test Drive Review.

The Tina Turner song "The Best" could quite easily be the theme song for the 2016 Honda Civic which, with its ever expanding lineup of models and bodystyles, managed to swoop into one of the most fiercely competitive market segment and stood clearly head and shoulders above them all. It's really that simple. We tested a Touring sedan with the all new 1.5 liter turbocharged 174-horsepower engine and it felt underpriced at $26,000 and change. And that's for the loaded model.

In addition, Honda recently introduced a coupe model and after that comes performance Si, Type-R and all-new hatchback versions of the iconic nameplate. Affordable performance enthusiasts will welcome the newfound availability of a six-speed manual transmission option on all trim levels of the hatchback with the punchy, rorty and rev-happy 1.5-liter turbo motor we so loved in this test albeit with an admittedly well tuned CVT-automatic.

The 2016 Honda Civic is well priced too with base models starting just over $18,000 nicely equipped and featuring a 2.0-liter non-turbo 4-cylinder offering 158 horsepower/138 lb. feet of torque with a six-speed manual available only on base LX sedans. Still, we can think of few better ways to part with $18,000. And did we mention how stylish this new Civic is? Bold, dynamic and stylish are the words that came to mind when gazing upon our new Civic tester. Read on to see if you agree. 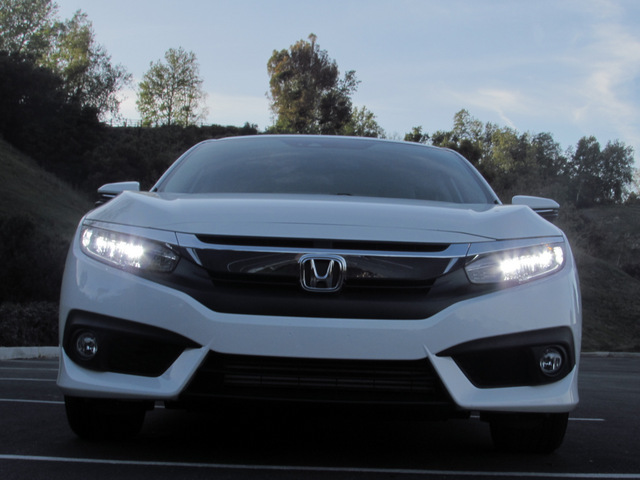 Although Honda managed to silence most critics of the 2012 redesign of its compact stalwart Civic with a shockingly thorough refresh in 2013, apparently the brand still wasn't satisfied and has made yet still more major changes to the car for 2014. Honda has always been known for having shorter model cycles than other automakers but seriously this is getting ridiculous. Clearly Honda's engineers and manufacturing powers that be can react at the speed of light but what do we think of this updated 2014 model?

First off, let's go over what they did to enhance the 2013 Civic. Honda started by boosting interior materials quality to class leading levels with a sense of perceived quality that is undeniable. Then they continued by enhancing steering feel with changes to where they mounted the rack, interior noise dropped noticeably thanks to sound deadening measures and suspension adjustments made the ride smooth yet still as agile as any Civic owner should rightly expect from this always fun to drive car. You'd think that was enough right? Wrong.

So, for 2014 Honda replaced its five-speed automatic which to our thinking worked perfectly well and replaced it with a new, more efficient CVT automatic similar to but not exactly like the one found in the larger Accord. Then, to quell complaints that its navigation system was antiquated and the stereo face plates which we thought were delightfully straightforward have been replaced by new, state of the art high-resolution 7-inch touch screens on all models even those without navigation. With this new feature also comes a back-up camera and features like the Honda-Link system previously only available on Accord. People also didn't like the fact that last year's model used a key to start it, apparently, so Honda responded by adding a Stop/Start button on the dash. And lastly, on the safety front the Civic also now boasts Honda's Lane Watch System which has a camera in the passenger side mirror so every time you activate your turn signal you can see across the two lanes next two you via the center screen to ensure no one is in your blind spot. Happy now?

The 2014 Honda Civic is available as either a slightly remodeled coupe or a stylish four door sedan and can come equipped with a range of powerplants spanning everything from a hybrid gas/electric, a 1.8 liter 143 horsepower/129 lb. feet of torque 4-cylinder, the Si model's 2.4 liter 201 horsepower/170 lb. feet of torque 4-cylinder on down to even a natural gas powered variant. Prices range from about $18,000 for base LX models all the way to $27,335 for a fully loaded 2014 Honda Civic Hybrid sedan with leather and navigation. And trust us, there are Civic's at every price point in between.

Our test model was a 2014 Honda Civic EX-L coupe equipped with the new CVT automatic transmission but we have tested a 2013 Honda Civic Si, 2013 Honda Civic EX sedan, the hybrid as well as the Natural Gas model so our experience with this model is very broad. We will in this review, however, be focusing mainly on the volume selling 2014 sedan and coupe with the 1.8 liter 4-cylinder and new CVT automatic. If you have any questions about any Civic model, feel free to contact us with questions via the email address team@iseecars.com or send me a direct message on Twitter @jameshamelcaroc. I will respond to all queries.
See the full 2014 Honda Civic Test Drive Review.