What Is The Average Price Of A Used Ford Mustang By Model Year?

The Ford Mustang is one of the most storied and well-recognized sports cars in American history. Introduced in the 1965 model year, the Mustang has undergone six generations of development. It is credited as being the first "pony car" in the American sports car category, a class of vehicle known for its affordable pricing and "short deck" coupe styling. First- and second-generation Mustangs are considered collectibles on the American market with third-generation Mustangs becoming so as well. On the used car market, the fourth-, fifth- and sixth-generation Mustang is the most common find outside of the collectible market. The fourth-generation entered the market in 1994 and the design held for a decade. As has become traditional with Mustang models, this generation had a six-cylinder and eight-cylinder engine option. A slight restyling with some engine upgrades was made in 1998 and 1999. The fifth-generation Mustang entered the market in 2005 with a much more modernized with a "retro-futurism" design heavily influenced by IndyCar champion Mario Andretti. Again, a V6 and V8 engine option was offered. A mid-cycle redesign was released in 2009, but the fifth-gen Mustang remained until 2014. In 2015, the current-generation Mustang was introduced, with exterior styling continuing in the "retro-futurism" theme but with underpinnings that radically stepped away from the traditional Mustangs of previous generations. For the first time, an independent rear suspension lay under the Mustang, dramatically improving handling and safety, while a four-cylinder engine was introduced for the first time alongside the traditional V6 and V8 options. This generation Mustang was the first to achieve top safety ratings from the National Highway Traffic Safety Administration (NHTSA). In recent generation Mustangs, the primary complaints are with mid-mileage (40-60,000) vehicles of the fourth- and fifth-generations of the car (2005-2012). These are usually related to paint or body corrosion, an issue that plagues many Ford vehicles of those eras.

More so than any other pony car in the American sports coupe arena, the Ford Mustang has options to suit just about anyone. Redesigned in 2015 with a better ride, sportier quality, and much-improved interior, the Mustang also has powertrain and technology options to fit any driving style or budget.

No other American muscle car can claim the kind of sales history and popular persona that the Mustang holds. For 2019, Ford added a new Bullitt appearance package and a new California Special trim point.

The 2017 Mustang mixes today's expectations of a sports coupe with the nostalgia of the most-storied Ford vehicle. The Mustang was redesigned in 2015 as a more modern rendition of this classic, adding key elements that brought it into more competitive sports car territory. Its exterior and interior design pay homage to its past, making sure that the Mustang continues to be the pony car that named the category.

The 2017 Ford Mustang is a 2+2 coupe, or convertible offered with three engine options, two transmission choices and three main trim levels along with several sub-trims to match. Engine choice determines the major trim level, while sub-trims are named for their package additions, whether interior upgrades or chassis changes.

The wide range of choices and varying options for affordability are key components to the Ford Mustang's success. A low-cost base level 2017 Mustang can be purchased without much financial sacrifice, while performance-oriented, hardcore GT models can be had with a wealth of sports or luxury options.
See the full 2017 Ford Mustang Test Drive Review.

The 2016 Ford Mustang is a powerful mixture of nostalgia and present-day expectation. Redesigned in 2015, the Mustang jumped into the modern age without losing its focus on being the affordable, everyman's muscle car. This pony car that started the term continues to carry with it performance and style and does so with a greatly-improved interior and a much more sports-oriented chassis.

Key upgrades for the new Mustang are found in the new independent rear suspension, a first for the pony car and just added this generation. Also added are many interior improvements, including higher materials quality and better design ergonomics. Upgrades for the 2016 model year include integrated turn signals in the GT's hood vents, a new infotainment interface called Sync 3, and a new Black Accent and California Special set of packages for the GT models.

The 2016 Ford Mustang is still a 2+2 coupe or convertible offered with three engine options, two transmissions choices, and a variety of package upgrades. Trim levels are designated by the engine choice (base, EcoBoost, and GT) with sub-trims including Performance and Premium.
See the full 2016 Ford Mustang Test Drive Review.

For this review we approached things a little bit differently as Ford introduced a wide array of very different Mustang variants for the 2015 model year with the biggest news being the addition of a 2.3 liter turbocharged 310 horsepower/320 lb. feet of torque EcoBoost 4-cylinder engine.  And frankly we felt that especially when mated to the slick shifting six-speed manual gearbox that the EcoBoost motor was more than powerful enough to keep us grinning. The only downside being that it prefers Premium Unleaded but then again so does the 5.0 liter V8 and the EcoBoost has an EPA fuel economy estimate of 22 city/31 highway. The V8? 15 city/25 highway.

We would mention the base carryover 3.7 liter 300 horsepower/ 280 lb. feet of torque V6 that does admittedly run on regular unleaded but it does so in a comparatively loud and unrefined manner compared to the EcoBoost and the 5.0 liter 435 horsepower/400 lb. feet of torque V8. Oh, didn't we mention the power readings from the V8? Well, before you start to worry about Dodge Hellcat owners mocking you do take solace knowing you are about 400% less likely to crash your new car into a center divider as you pull out of the dealership. And as a bonus, a Mustang is fun to drive at all speeds and will not catch you unawares traveling at 140 miles per hour. Try getting out of that ticket in your shiny new Hellcat.

Going back to the Ecoboost motor, to some a Mustang with a 4-cylinder is akin to heresy much like claiming the Mustang Two was anything more than a Pinto in drag.  But true aficionados of the pony car will know this isn't the first time Ford has given its ultra-successful sporty two door four cylinders as the 1984-1986 Mustang SVO turbo model could attest. It is a highly collectible vehicle today even though the public and perhaps even Ford didn't know what to make of this Mustang which was supposed to be more fuel efficient. In fact, Ford never publicly admitted the SVO's engine made a healthy for that time 175 horsepower and if the road had curves it could really rattle a V8 Mustang owner's nerves.

So that was a little bit of what has come before for the Mustang nameplate but truly all eyes are on the 2015 Mustang models to show everyone if this pony car can ever truly be tamed after years of a reputation for being somewhat unruly especially with the V8 engines. Well, this was the first Mustang designed to be sold around the world in right and left hand drive so Ford must have allocated more funds to the project because this is like watching a pop diva returning from a filmed, drunken embarrassment broadcast on TMZ rise out of it with a stunning, simple and powerful performance.

This, now, is the chance for the Mustang to show the world all that it has been, all its many newfound talents and more importantly to make people hopefully feel good about themselves when behind the wheel. We know we did but we never look very cool so we take any opportunity. 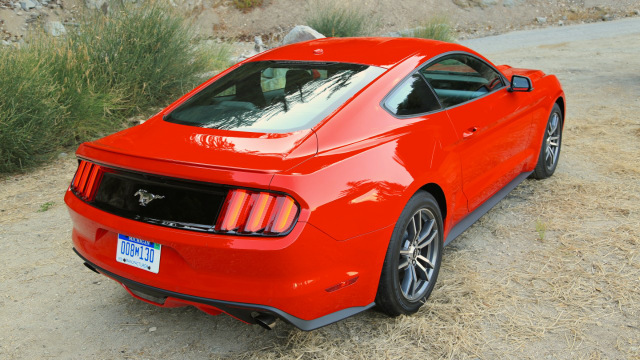 How much is a Ford Mustang?


See below for the average Ford Mustang Coupe price across model years.

The average price for a 3-year-old used sports car is $35,412, with the Ford Mustang Coupe's price typically $9,223 above average for this vehicle type.


See below for the average Ford Mustang Convertible price across model years.

The average price for a 3-year-old used sports car is $35,412, with the Ford Mustang Convertible's price typically $926 above average for this vehicle type.


See below for the average Ford Mustang price across model years.

The average price for a 3-year-old used convertible is $35,412, with the Ford Mustang's price typically $926 above average for this vehicle type.


See below for the reliability scores of various cars in the sports car category:


Is the Ford Mustang a good car?

Is the Ford Mustang safe?