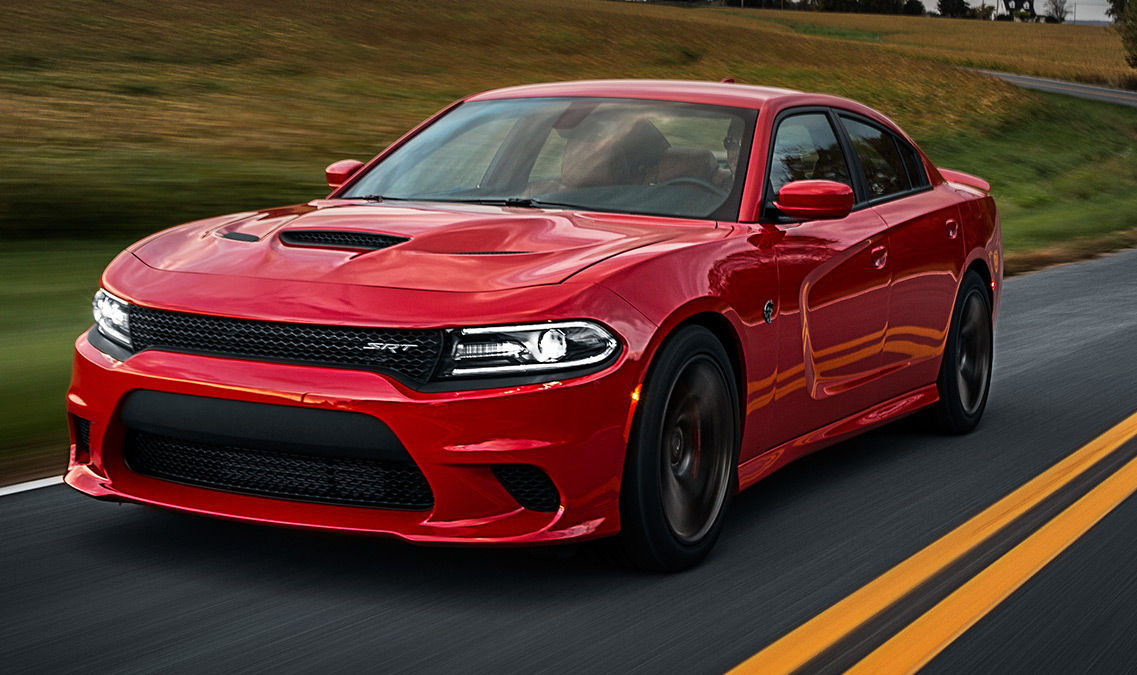 Although the first true American muscle car was introduced in 1949 with the Oldsmobile Rocket 88, it wasn’t until the 1960s that muscle cars enjoyed their heyday. It was during this time that Americans embraced their love for powerful vehicles, and the major American automakers introduced high-performance vehicles into their lineups to keep up with the growing demand.

There aren’t as many Detroit-bred muscle cars in production today (RIP Plymouth and Pontiac), but there are still several classic American muscle cars to choose from. There are even luxury vehicles that have the qualities of a muscle car for drivers who want something more sophisticated. With many muscle cars for sale across many different trim levels, we are breaking down which ones are the best for power-hungry drivers.

What is a Muscle Car?

Muscle cars don’t have a standard definition, but for the purpose of this article, we are categorizing traditional muscle cars as American coupes and sedans with powerful v8 engines. They typically come standard with rear-wheel drive rather than front-wheel drive, but all-wheel drive versions are also available. (Learn about the differences of RWD vs. FWD here.) With their fast acceleration and straight line speed, muscle cars are considered the best vehicles for drag racing and these performance cars are also relatively affordable when compared to the foreign sports cars for sale today. Along with the standard American muscle cars, we are also including an analysis of foreign and American luxury vehicles that we feel embody the essence of a muscle car.

Each American muscle car is iconic in its own right, but some perform better than others. We determined the most reliable muscle cars based on iSeeCars longest-lasting cars data that analyzed 15.8 million pre-owned cars to see which had the highest mileage. While the study examined cars most likely to reach 200,000 miles, the threshold for our Best Muscle Cars list is 150,000 miles because these cars generally aren’t used for high-mileage hauling. The vehicle’s torque and horsepower are also taken into account.

Second is the Ford Mustang. Though generally classified as a sports car, its high-performance trims earn the muscle car designation. First is the Ford Mustang GT, which has a four-cylinder V8 engine that provides 460 horsepower and is available with a six-speed manual transmission or a 10-speed automatic. The Mustang Bullitt has the same V8 engine but offers 480 horsepower and only comes with a manual transmission.The highest-performance variants are the Shelby Mustang models which include the Ford Mustang Shelby GT350 with a 5.2-liter V8 that provides 526 horsepower. And new for 2020 is the aerodynamic Shelby GT500, with a supercharged 760 horsepower V8 engine to make it the most powerful car that Ford has ever produced. You can find a Shelby GT500 for sale starting at $73,995 with fully-loaded versions exceeding six figures. However, used Mustang Shelby GT500 versions will enter the marketplace in the coming years to make the car more affordable.

In fourth place is the Chevrolet Camaro, which earns muscle car distinction with its LT1, SS, and ZL1 trims. With a starting price of $34,000, the beloved Chevy Camaro LT1 is the lowest-price V8 muscle car on the market and comes with a 455-horsepower engine and a performance suspension. The SS comes with the same engine, but adds more technology and safety features. The Chevrolet Camaro ZL1 is the most powerful and expensive trim and comes with a 650-horsepower V8 engine. Along with the Mustang, the Camaro is generally considered as a pony car rather than a muscle car due to its size, but we are categorizing it as a muscle car based on its engine performance. The most affordable muscle car on the list, a new Camaro has an average new car price of $35,450 while a three-year-old used Chevrolet Camaro for sale costs an average $25,301.

Rounding out the list is the Dodge Challenger, which like the Charger, combines power and comfort with its spacious cabin and robust engine choices. The Challenger is available with a V8 engine on its R/T and SRT-Hellcat trims. The R/T is the lowest-priced trim to feature a V8 engine and provides 372 or 375 horsepower from a Hemi V8. Moving up the trim line is the R/T Scat Pack, which is upgraded to 485-horsepower and has more convenience features and a better infotainment system. The Scat Pack is also available with the Widebody package that adds 3.5 inches of width and includes a high-performance suspension and brake system on 20-inch wheels. Next is the SRT Hellcat with a 717 horsepower Hemi V8 engine and features including a supercharger, upgraded brakes, and a high-performance SRT-tuned suspension system. The most powerful trim is the Challenger SRT Hellcat Redeye with 797 horsepower from a supercharged Hemi V8 engine and eight-speed automatic transmission. With a quarter-mile track time of 11.2 seconds, it’s a force to be reckoned with on the drag strip.

The classic definition of muscle cars applies to mainstream American brands, but there are also powerful luxury cars that fit the muscle car performance criteria.

The BMW M5, which is the performance variant of the 5 Series, features a 600 horsepower V8 engine and is known as one of the best luxury performance cars on the market. It has a premium interior and includes luxury features like a heated steering wheel, but it doesn’t come cheap at a new car price that’s well into six figures.

Ranked second is the Cadillac CTS-V, which is powered by a supercharged 6.2-liter V8 engine that provides a staggering 640 horsepower. Reaching a top speed of 200 mph, it goes from zero to 60 mph in just 3.7 seconds. Although it was discontinued after the 2019 model year, it deserves a spot on the list because it brilliantly combines American luxury and muscle while having the performance of a supercar. A new version costs on average $97,690, while a three-year-old used Cadillac CTS-V for sale costs on average $61,332.

The Tesla Model S Performance model might not have the styling to resemble a muscle car, but it performs like one. Thanks to its Cheetah Stance Mode update, it has a quarter-mile time of just 10.54 seconds and can go from zero to 60 in just 2.41 seconds. Used models were once hard to come by, but you can find a three-year-old used Tesla Model S for sale for an average price of $61,985.

The Lexus RC-F has a 472-horsepower naturally aspirated 5.0-liter V8 engine and can achieve zero to 60 in 4.2 seconds. New for 2020, it added 5 more horsepower and 6 additional lb-ft of torque. A new version of the vehicle costs an average of $84,522 but you can find a bargain on a used Lexus RC-F for sale thanks to its steep depreciation.

It’s impossible to celebrate modern-era muscle cars without paying homage to the classic cars with powerful engines that paved the way for the beloved turbo cars of today.

Named after the beloved Road Runner from “Looney Tunes,” the Plymouth Road Runner was the first high-powered, but low-priced muscle car that helped widen the audience for high-performance vehicles.

Introduced in 1969, the Dodge Charger Daytona was the first car to ever reach 200 mph on a Nascar track. It was so fast that it was later banned from the racing circuit.

The Pontiac GTO is considered by many to be the first true American muscle car and was believed to be responsible for the popularity of the genre. The original 1964 GTO was powered by a 389-cubic-inch V8, which was larger than GM’s limit of 330 cubic inches for midsize cars.

Originally produced as a pony car, the third-generation Plymouth Barracuda fastback debuted in 1970 with a dual-carburetor 426 Hemi engine that achieved 425 horsepower.

The iconic Pontiac Firebird Trans Am debuted in 1969 as a performance package to the popular Firebird. Designed by famed designer John DeLorean, all versions were white with blue racing stripes. The Firebird went on to become a classic and was Pontiac’s flagship performance vehicle.

Winner of the Le Mans, the Shelby Cobra 427 was once considered the most powerful car in the world. Known as a sports car, it had a special model with a Ford 7-liter V8 that achieved 425 horsepower.

The Chevrolet Chevelle SS is among the most iconic classic muscle cars in history. Known for its big-block engine, the 1970 Chevy Chevelle SS 454 cubic-inch engine with 450 horsepower was one of the most powerful vehicles of its time.

The Buick GNX, which stood for Grand National Experimental, was the most powerful muscle car in 1987. It could race a quarter-mile in 12.7 seconds reaching speeds up to 113 mph.

If you’re power-hungry and have always dreamed of owning a modern muscle car or even a classic hot rod, the vehicles above are sure to fulfill your desires.

If you’re interested in a new or used muscle car, be sure to check out iSeeCars’ award-winning car search engine. It uses advanced algorithms to help shoppers find the best car deals and provides key insights and valuable resources, like the iSeeCars VIN check report. Filter by horsepower, drive type, and other parameters to find your next vehicle.