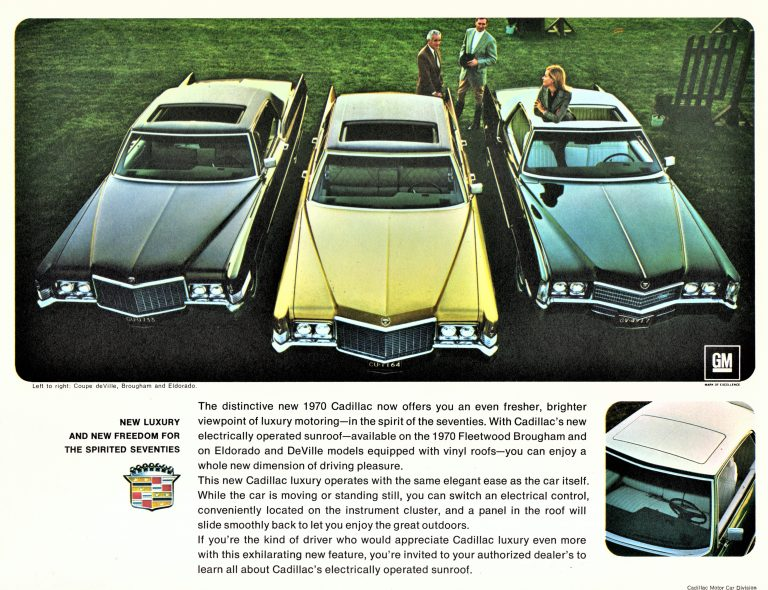 This 1970 Cadillac Deville advertisement shows off the luxury of a factory power sunroof.

A glass roof in a vehicle can add a flourish of light to an otherwise dark interior. It’s a welcome add-on in an age where high belt lines and thick pillars have made large expanses of side glass uncommon. It can also add a touch of luxury to vehicles as ordinary as a Camry, RAV4, or CR-V.

Buyers seem to agree, and popular options these days include the panoramic roof, the sunroof, and the moonroof. These different names are often thrown around interchangeably, but there is in fact technical differences between the three options. So you can have a better handle on what makes each style of roof distinct, we’ve laid out their particular attributes here.

Probably the most common term for any glass panel that lets in light through the roof. Yet the reality is that a sunroof doesn’t have to be a pane of glass at all. To be a sunroof it can either be a glass or metal panel that will tilt, partially retract, or fully open. If it’s a large tinted glass panel that may fully open into the roof, it’s a moonroof.

In the old days, sunroofs were small little slits of glass in the roof that were installed by the aftermarket and would have to be manually cranked open. Nowadays not only is the glass area of sunroofs larger than ever but there are also multiple ways to enjoy them. A quick rundown on the different types of sunroofs:

Pop-up sunroof: This is a manually-operated panel that tilts upward but doesn’t retract. You manually prop it up and lock into a tilt position. It’s like a vent window for your roof.

Spoiler sunroof: The spoiler is electronically operated and partially slides backward on the roof of a car rather than into the crevice between the roof and the headliner. If you see a car with whose spoiler sunroof is open, you’ll see a pane of glass jutting up into the air over the roof of the car.

Top-mount sunroof: This power sunroof style is similar to the spoiler sunroof but opens completely. When it is open the panel slides back onto the roof of the car.

Inbuilt sunroof: this is the style most similar to a moonroof. The inbuilt sunroof is a glass sunroof where the panel can fully slide back into the roof above the headliner. In older cars it may be slid back by a manual crank, but new cars will be electrically operated.

While the sunroof is a metal or glass piece that tilts, retracts, or both, the power moonroof is exclusively a tinted glass panel. It may be fixed or it may operate like an inbuilt sunroof that retracts fully into the roof. The moonroof will have a sunshade that may either be manually or electrically operated and can be closed to shut out the sun.

Automakers these days are more enamored with the moonroof than the sunroof. Entry-level brands like Ford, Chevrolet, Toyota, and Honda all offer moonroofs on many of their models. Luxury brands like Acura and Lexus are also marketing power moonroofs as well.

In the old days sunroofs and moonroofs were small panels that weren’t much bigger than a large food tray. Today, however, automakers seem to be in an arms race as to whose sunroof or moonroof can be the biggest. This has since brought about the emergence of panoramic roof systems.

The panoramic roof is two large glass panels that together stretch over the front two rows of seats. The front panel acts as a top-mount sunroof, with all the tilt and slide functions of that type of sunroof design. The back panel is a panoramic moonroof. It is a large fixed piece of tinted glass that rear passengers can look out of but can’t open. These types of roofs most often have a power sunshade as well.

Things to Watch Out For

If you’re looking to buy a used car or SUV with any type of sunroof or moonroof, especially an older used car, be sure to look for any sign of leaking in the interior. This is particularly true with an aftermarket unit. It’s not common for a factory-installed sunroof or moonroof to leak, but one installed by a third party might not be so waterproof.

When you’re inspecting used cars with a sunroof at the dealership, just take a look around the seals by the sunroof to ensure they’re dry. Also try to open and close the sunroof as well to make sure it works. Do this before or after the test drive so you’re not distracted.

Don’t discount the cost of repairs, either. Motors can fail, drains can clog, the glass can jam on its tracks. All this can be expensive to service and fix.

In the United States sunroofs have largely fallen out of favor for moonroofs, but the darling of the present age is the panoramic roof. It’s easy to see why this is the case: it’s the best of both worlds. It offers plenty of natural light, it can let in fresh air, and it indulges rear passengers as well those up front. If you’re buying a new vehicle that offers a panoramic roof, it’s well worth considering, especially in an otherwise closed-up car like a coupe.

If you’re in the market for a new or new to you car,  you can search over 4 million new and used cars with iSeeCars’ award-winning car search engine that helps shoppers find the best car deals by providing key insights and valuable resources, like the iSeeCars VIN check report. You can even search for cars that have moonroofs or sunroofs.