Which Automakers Have the Best Recall Rate and Timeliness?

A new study by iSeeCars.com analyzed over 31 years of recall history and found that Porsche boasts the lowest “recall rate” and Volkswagen the highest, GM has the best "recall timeliness" of the major automakers, and Tesla earns the best “recall proactiveness” and Ford the worst.

iSeeCars.com analyzed new vehicle sales data and recall data from the National Highway Transportation Safety Administration (NHTSA) from January 1985 through September 2016 for each auto manufacturer to calculate three metrics: “Recall rate” demonstrates how often a manufacturer produces a vehicle with a defect relative to the number of cars they sell; “recall timeliness” is an indication of how quickly and willing an automaker is to identify problems with its cars and initiate a recall within three years; “recall proactiveness” reflects the extent to which the cars recalled by an automaker was a result of its own investigations or those of NHTSA.

Consumers who don’t like their cars getting recalled and wasting their time getting them fixed would want to buy a car from a manufacturer with a low recall rate. Porsche has the lowest recall rate, recalling just 531 cars for every 1,000 cars sold while Volkswagen is last on the list, with over 1,800 vehicles recalled per 1,000 sold. Why is that possible?  The same vehicles could be recalled multiple times for different reasons.

“This is surprising because VW cars are usually highly rated – Audi was Consumer Report’s top rated brand in 2016,” said Phong Ly, CEO of iSeeCars.com. But during the period analyzed, Volkswagen consistently maintained a high recall rate, resulting in its low 13th place ranking. The recalls (and sales stoppage) of diesel cars due to cheating on emissions tests have not yet been issued, but will make the company’s recall rate even worse. 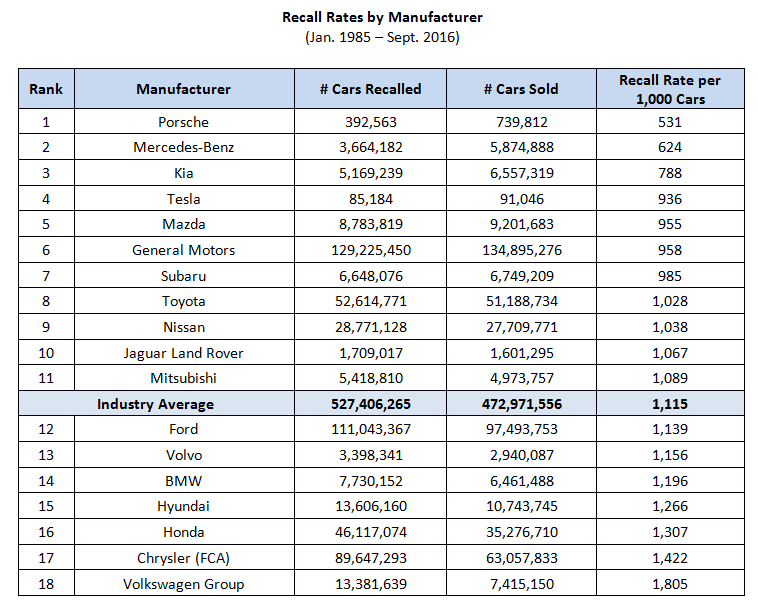 Over the 31-year period, the industry average was 1,115 car recalls per every 1,000 sold. Eleven of the 18 automakers ranked above the industry average. "It's interesting that over the long term, there’s no direct correlation to manufacturer size, country of origin, or longevity of U.S. sales, which points to the way recalls are handled as something very specific to the auto manufacturer," said Ly.

Individual differences in manufacturers' approaches to recalls can be seen in the severity of the recall problems, and recall rates should also be considered in the context of the severity of the consequences. While a large majority of cars (88.1% of affected cars) are recalled for problems that could cause death, crashes, injury, fire, or accidents, some recalls can be for relatively minor problems, such as a misprinted phone number in the manual. For example, while General Motors ranks 6th for recall rate, 90.1% of the cars recalled are for issues with possible dire outcomes. Conversely, Volkswagen has the worst recall rate but has a lower percentage of vehicles with severe ramifications at 77.6%. Volkswagen's recall rate may be high because the company is more willing to issue a recall for a wider range of problems. Similarly Volvo, which has a reputation for safety, has a less than stellar recall rate. However, 71% of Volvo's cars are recalled for dire consequences—the lowest of any automaker. 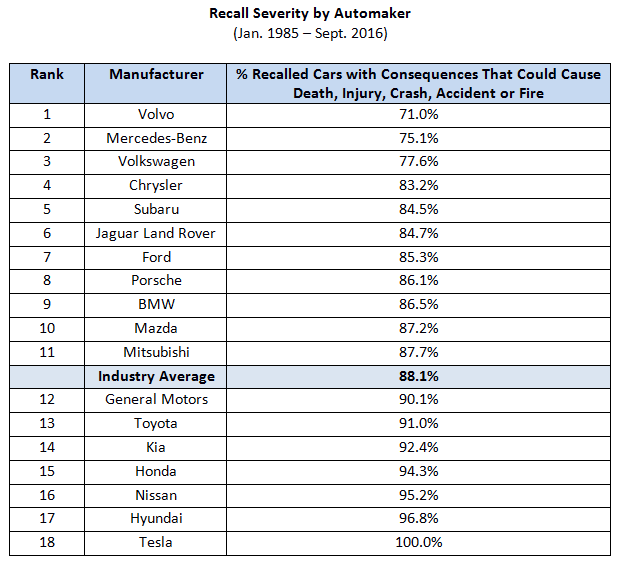 The analysis of 5-year segments revealed that the industry average for recall rate skyrocketed in the last five years to 2,380 recalls per 1,000 cars. On the whole, the recall rate more than doubled in the most recent five years over the last period. But at the manufacturer level, there were some dramatic differences.

Perhaps the biggest surprise was Volvo, which not only has the best recall rate from 2012–2016 by far, but went from a recall rate that was more than double the industry average in 2002–2006 to a rate that is now less than one-quarter of the industry average. Ly said, "It would seem that Volvo's process of reinventing itself, which most notably began in 2012 when it introduced the XC90 concept car, is having a positive effect on greatly reducing the number of recalls." 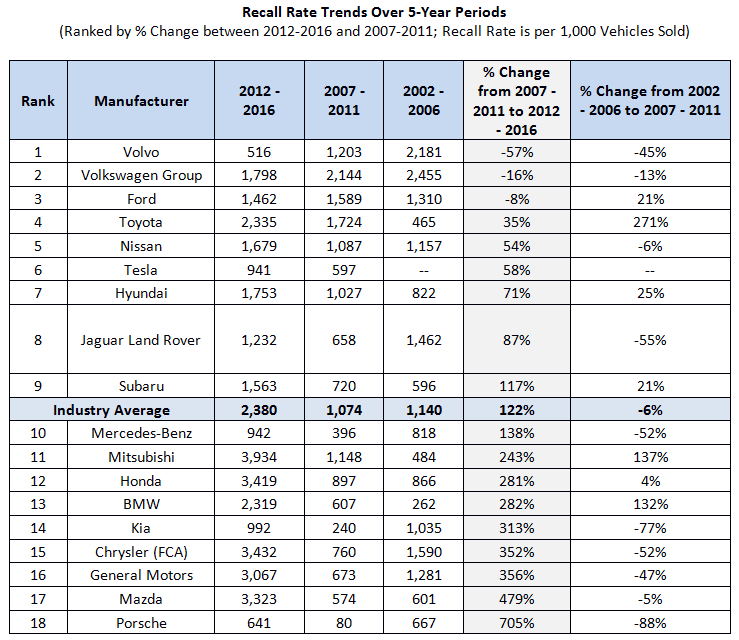 Automakers that experienced dramatic increases in recall rates over the last five years include BMW, Chrysler, GMC, Honda, Mazda, Mitsubishi and Toyota. "A key reason for this increase is attributable to the very large recalls in recent years, such as the Takata airbag and the GMC ignition switch recalls," said Ly. “The large contrast for some manufacturers such as GMC between the last two 5-year periods could also be linked to the decline in overall sales due to the recession—recall rates in the 2007–2011 period could have been lower because fewer cars were being produced, making the increase in 2012–2016 even larger," added Ly.

Recall Timeliness: GM is the Most Timely of the Major Automakers, Mazda is the Least Timely

To assess timeliness, iSeeCars.com analyzed the number of recall campaigns from January 1985 to September 2016 and compared that to the number of campaigns involving vehicles within three years of their sale to determine how quickly automakers were issuing recalls. As an industry, manufacturers issued a recall within the first three years two-thirds (66.6%) of the time. Once again, there are no correlative factors between the automakers above the industry average, indicating that timeliness relates most directly to the individual manufacturer's process.

"Timeliness is really a measure of how the car manufacturer handles recalls internally," said Ly. "Automakers know there are bound to be recalls, and how quickly they act has more to do with their process to assess reports of possible safety issues, conduct internal research or tests, and determine a course of action."

Of all automakers, Tesla was the most timely at 100%, and General Motors had the best recall timeliness of the major automakers at 74.7%. “Despite the well-known ignition switch recall in 2014, GM’s recalls have historically occurred within the first three years after production,” said Ly. On the other hand, Mazda had the worst timeliness, largely due to major recalls in 2015 for ignition switch short-circuiting problems that affected vehicles going back 20 years. 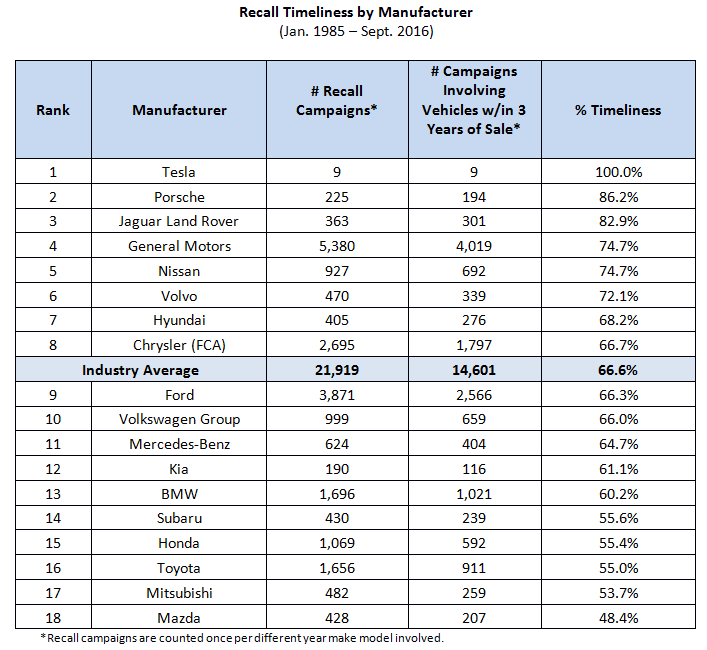 The analysis of car recall timeliness in 5-year segments over the last 15 years is particularly telling. "When you break the data down, it's easy to see that timeliness dropped substantially with each 5-year segment," said Ly. "This is largely indicative of NHTSA's increased push on manufacturers to issue recalls for cars that have been on the road for many years. Takata’s massive airbag recall affected numerous automakers and so did Mazda's ignition switch issue." 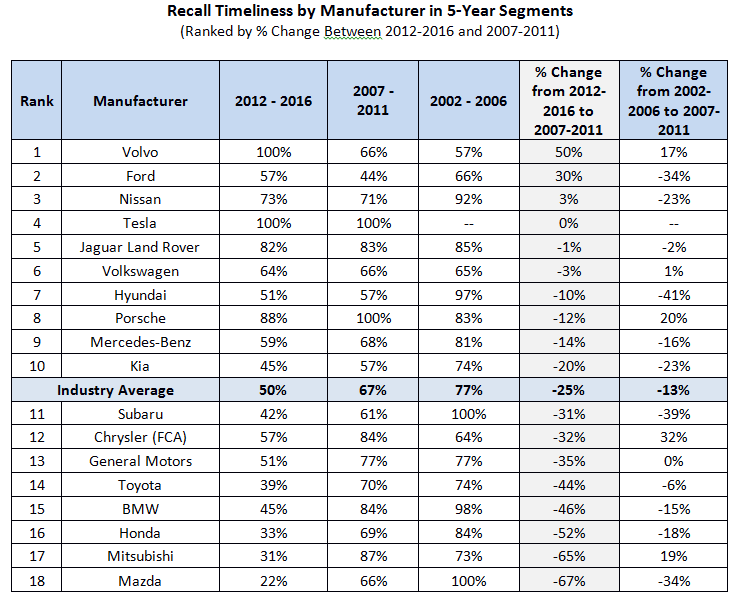 Recall Proactiveness: Tesla is the Most Proactive and Ford is the Least

It’s not a surprise that Tesla is the most proactive manufacturer as it only starting selling cars in 2008 and maintains a more direct relationship with its smaller customer base, but it is interesting to see that Ford ranked last, with only 29.6 percent of the cars recalled throughout 31 years resulting from problems it found on its own. This percentage is far below the industry average of 46 percent. Of the 20 recall campaigns that each affected more than one million of Ford's vehicles, 18 of them were initiated by NHTSA. 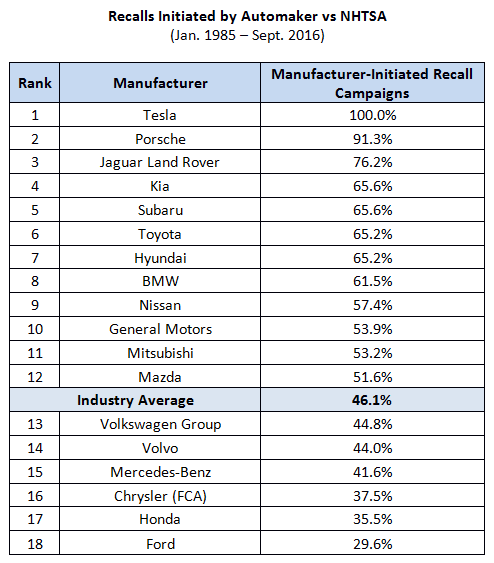 While there are many factors to consider when purchasing a car, car shoppers should consider automakers with a low recall rate, high proactiveness and a high percentage of recall timeliness. "With this approach, consumers can have increased confidence that they’re buying from a manufacturer that will likely respond more swiftly to address safety issues and protect its customers," said Ly.

iSeeCars.com analyzed the October 1, 2016 Recalls Flat File from the National Highway Transportation Safety Administration. For each manufacturer, recall data from January 1985 to September 2016 were analyzed. The recall rate was calculated by dividing the total number of affected units by the number of new vehicle units sold during a given time period. Recall severity was calculated based on analyzing recalls with consequence summaries that included any of the keywords “death”, “injury”, “injuries”, “injure”, “crash”, “accident”, or “fire.” The number of affected units from campaigns with such summaries was expressed as a percentage of all units affected. Recall proactiveness was calculated as the percent share of affected units that resulted from manufacturer-initiated campaigns. To calculate timeliness, the number of recall campaigns within a given time period were counted and compared with the number that occurred within three years of the affected vehicles’ model year. A campaign was counted once per distinct model it encompassed.

iSeeCars.com is an automotive data and research company that helps consumers find the best car deals by providing key insights and guidance. It turns new and used car shopping on its head by applying big data analytics powered by over 25 billion (and growing) data points and using proprietary algorithms to objectively analyze, score and rank millions of cars and thousands of dealers. Based in the Boston area, iSeeCars.com was founded by former TripAdvisor and SAP developers and executives determined to improve the car shopping experience for consumers.

» The Most Popular Used Electric Vehicles by State
» Best Places to Buy a Used Car
» Best Used Cars to Trade-In and Buy Amid the COVID-19 Pandemic
» The Fastest-Selling New and Used Cars
» Off-Lease Cars: What Are the Best Deals?
» Used Car Sales Recovery: Which Cars Are Seeing Growth?
» Buying a Rental Car: Best Hertz Deals
» New Cars With the Most Excess 2019 Inventory
» Cars with the Greatest Slowdown in Sales Due to COVID-19
» Best Affordable Used Cars
» Longest-Lasting Cars to Reach 200,000 Miles and Beyond
» Buying a Used Vs. New Car: Which Provides the Better Deals?
» Most Popular Car Colors
» Cars People Keep the Longest
» Most Popular Cars in America
» Best Used Cars for 2020
» Black Friday Car Deals for 2019
» Best Time to Buy a Used Car
» Cars That Hold Their Value
» Tesla Colors: Which Offer the Most and Least Deals?
Show More
Show Less