Woburn, Mass. -  The General Motors cars recalled for the faulty ignition switch in February have experienced a price drop that is more than double the average across all similar cars, according to a new study by iSeeCars.com.

The search engine that helps consumers find the best deal on a used car assessed the six GM cars affected by the ignition switch recall and found that the average price of all the recalled vehicles dropped by 14 percent from March through June 2014, compared to March through June 2013 and adjusted for inflation. By comparison the average for all similar cars was 6.7 percent over the same time period. "We surmise that the recalls are playing a role in motivating sellers to sell their used cars and at a lower price point that they otherwise would," says Phong Ly, iSeeCars.com CEO.

While the GM recalled cars dropped by 14 percent on average over the March-June 2014 time frame, iSeeCars.com's analysis also found that there was actually a decline from month to month, as shown in this graphic: 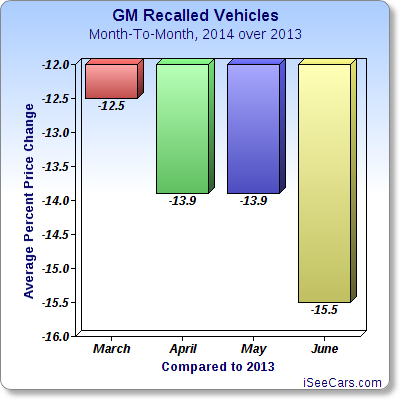 Among the recalled cars, the Chevrolet HHR, Saturn Sky and Pontiac Solstice dropped less than the Chevrolet Cobalt, Pontiac G5 and Saturn Ion. "The HHR as well as sibling convertibles Sky and Solstice are definitely more unique than the other cars in the recall. Their unique designs likely contributed to their desirability and helped them hold their value a bit better," says Ly. The average price drop for the Chevy Cobalt, Pontiac G5 and the Saturn Ion were at least two times greater than the average among all similar cars. This table illustrates the average price changes for the recalled cars compared to similar vehicles and GM cars as a whole.

While used car sales as a whole increased in the March-June 2014 timeframe compared to the same timeframe last year, the availability of used GM vehicles fell by about one percent, possibly indicating seller reluctance to put their General Motors-branded cars up for sale when the company has been in the throes of numerous recalls, likely because sellers were waiting to get the recall repairs complete before listing them for sale. "Sellers of GM vehicles that were not recalled probably don't need to be worried," says Ly, "since our data indicates that the average price drop for the non-recalled GM cars during that timeframe is 7 percent—just slightly above the average of all cars." 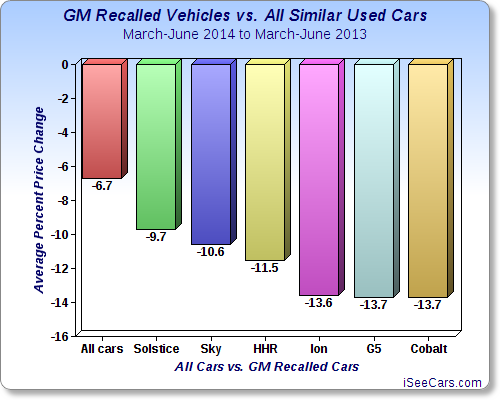 iSeeCars.com analyzed over 11 million used cars for sale by dealers from March to June 2013 and March to June 2014.  Average price changes were calculated for each General Motors car recalled for a faulty ignition switch in February 2014, as well as all similar vehicles and then all GM vehicles. 2013 prices were adjusted to 2014 using inflation data from the U.S. Bureau of Labor Statistics.