Problems to Watch For: Honda CR-V

Honda has spent the past two decades building a reputation as one of the most reliable automakers in business. They’ve been on the best-sellers lists with popular 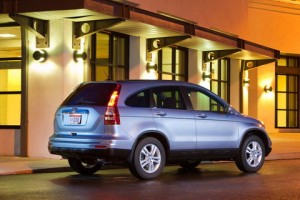 models like the Accord and Civic; they’ve jumped into the alternative-fuel ring with the Insight and hybrid versions of already-popular models; and, they’ve made family-friendly a big part of their repertoire with the CR-V. Don’t think this automotive Hercules isn’t without its flaws, however. It’s still a machine and, like all other things mechanical, it’s bound to have its problems. If you’re interested in the family-friendly side of things, the CR-V is a great pick. There are just a few small issues that some models have experienced, which we’ll highlight here. This could actually help you avoid some costly repairs by knowing what to look for and when. Information was gathered from Consumer Reports, The Institution for Automotive Service Excellence, Edmunds, and J.D. Power & Associates.

This one occurs especially on the 2007 & 2008 model CR-V. If you find one that still has low miles and the factory tires equipped, don’t expect to get much out of them. CR-Vs for the past few years have come equipped with either Continental or Bridgestone tires. The problem here is that neither one is really showing any better signs of wear than the other. That usually signifies something more with the vehicle than with the tire, but these tires are not completely innocent of other issues either. The Bridgestones have received complaints of road noise, and the Continentals have been reported as being too soft and affecting the ride. The tire size of 205/70R15 (the CR-V’s factory-equipped size) is not exactly cheap to replace either.

Most of the issues being seen with the CR-V transmissions are mild by transmission-problem standards. They’re more annoying than anything else. One common issue is a faulty electrical sensor within the transmission that sends a signal back to the computer, telling it there is something wrong with the tranny when there isn’t. It is annoying to waste a few hours at the repair shop to find out nothing is really wrong (aside from the little sensor), but most people breathe a sigh of relief here. The other issue is with transmissions leaking. This is also an annoyance, but one that millions of other drivers suffer from daily.

The climate control on the CR-V in these model years is known for condenser issues. Its job is to take hot refrigerant from the compressor and condense it to mostly liquid, then send it to the filter/drier. It, along with the evaporator, are the most important parts of your climate control. If you find a CR-V that is having A/C issues, it may need a lot more than just a couple cans of Freon. Another problem you may encounter will be a leaky heater core. These are usually easy to spot by large amounts of condensation on the inside of the windshield, and a sour-sweet smell coming from the heater vents.

This problem could have quite a bit to do with that premature tire wear we mentioned earlier. The CR-V’s front wheel bearings are infamous for being noisy and failing much earlier than they’re supposed to. You’ll know when you have a wheel bearing going bad by a growling noise that is similar to very loud tire noise. It will get louder as you go faster, and may even wind down to a grinding sound if you’re moving slow enough. Bad wheel bearings are very easy to check for, and can usually be found during a routine tire rotation. That doesn’t make them cheap to replace though.

This is one of those minor-blemish problems that you never notice until after you’ve bought the car. On certain models in these years, check the paint very closely. There will be tiny little metal flakes in it. There are areas on these models where this metal flake has pooled into one collective area and created a disco-ball effect with the paint. This bothers many people, but for those who grew up listening to disco, it’s probably just nostalgic.

Keep in mind that these problems don’t happen in every one of these vehicles. These are just the most-reported issues for these particular models, and they only signify a small fraction of the total vehicles sold.