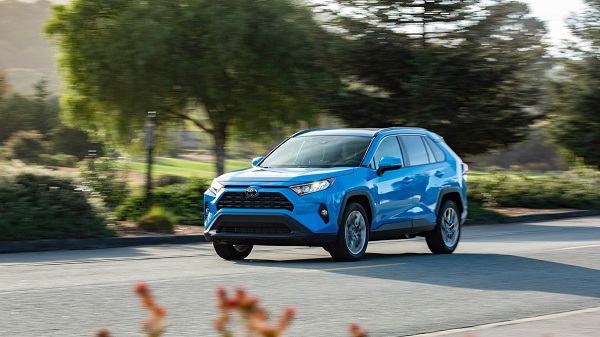 Toyota's new 2019 RAV4 is updated after a very long span of time in which it remained a top seller. This two-row crossover offers AWD on all six different trims. Toyota has value trims, entry-level trims, off-road trims, and a hybrid. The RAV4 is a wide model line that has broad appeal. 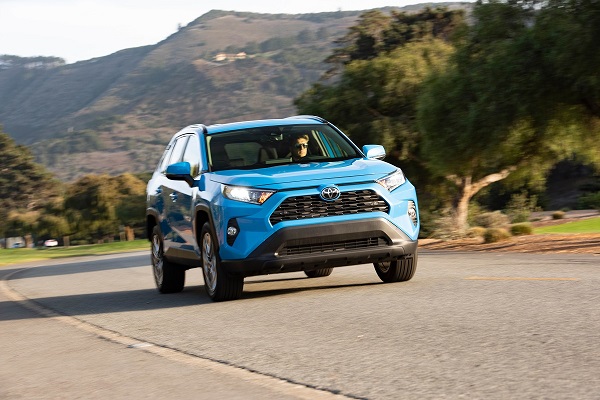 The all-new 2019 Toyota RAV4 rides on a new platform and has a new body and a different look. The look is fresh, but not new. We see a lot of the Toyota 4Runner, Highlander, and old FJ Cruiser in this crossover design. We also can't help but see some influence from the Jeep family of crossovers, the Compass and Cherokee in particular, in Toyota's new design. The squared-off wheel wells say Jeep to us.

Up front, Toyota's RAV4 trims all get slightly different grills. We like them all. Toyota has wisely avoided any polarizing design element here like it applied to the Lexus family. Along the sides, we see a strong silhouette that looks like a rough and ready SUV. In back, Toyota opted to add a bit of a slope to the rear end. That cuts back on cargo volume a bit, but it sure helps the look. Overall, Toyota has a bold new design for its RAV4. We feel that it will age well. Important, since Toyota keeps its model generations longer than its peers in the crossover industry. 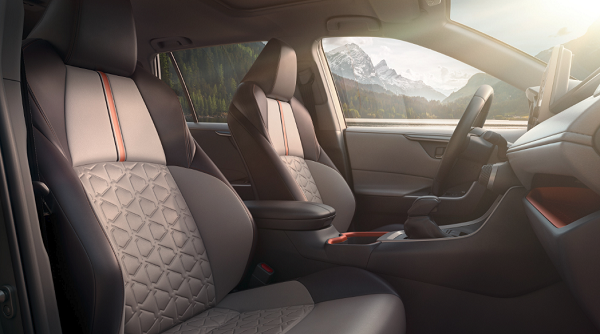 Inside, Toyota's new 2019 RAV4 has much to like. Importantly, it fits our tester's 6-foot tall, 200-pound frame without any areas feeling tight. Even the right leg knee area is acceptable for tall drivers. The seat of our XLE trim tester was a bit tight side to side, but not far from the mainstream. In the back, second-row passengers get ample room, even though in terms of passenger volume the RAV4 is only mid-pack (under 100 cubic feet). 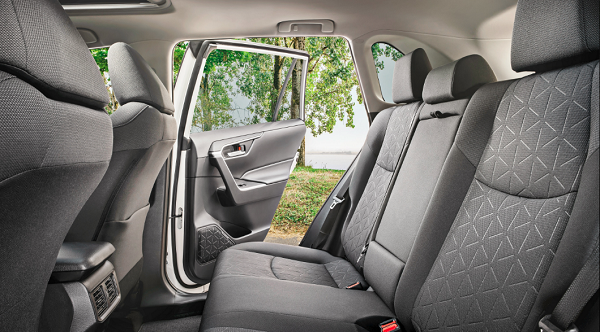 The controls Toyota selected work well. We love that the heated seat and steering wheel controls of our XLE trim were buttons that we could set to stay on. The HVAC and audio control knobs are big and easy to grasp and operate without taking one's eyes off the road. The gear shift selector is conventional and immediately useable, unlike some competitors that force you to learn a new way to shift. Toyota's touch screen and infotainment controls are all intuitive and easy to learn without the use of a manual. In total, Toyota made all the right moves inside the new 2019 RAV4. 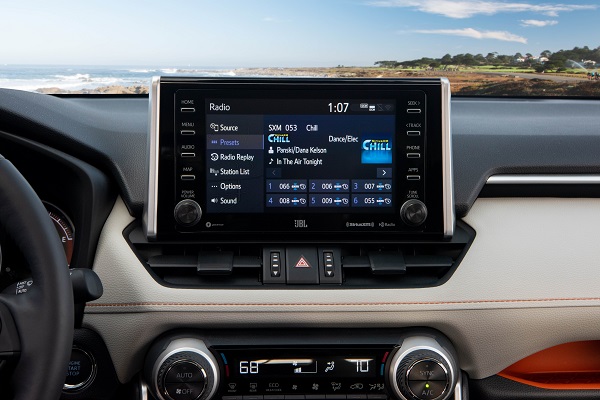 Toyota's RAV4 infotainment system for 2019 has an important new feature, Apple CarPlay. However, Toyota leaves the half of the driving population who use Android devices out in this update. No Android Auto? Every other crossover in this segment has that at no added charge. Toyota won't sell it to you at any price. We feel this will make the RAV4 age poorly.

The mid-price-point XLE with the Entune Audio Plus package and XLE Convenience Package we tested had an upgraded 8-inch screen. It did not have a head-up display or adaptive headlights that move in turns. There was also no native navigation built in. Toyota instead suggests owners use the Scout app. Have you heard of it? 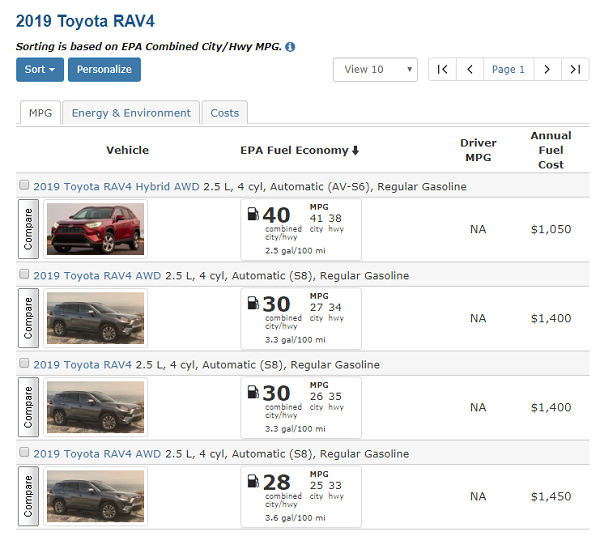 The RAV4's fuel economy is trim-dependent. It ranges from 28 MPG Combined for trims like our XLE to a whopping 40 MPG for the hybrid. Look closely at the trim you consider to be sure you know what you are getting. All RAV4 trims use regular fuel.

This is the first year of the RAV4's new generation. With that comes some unpredictability. However, the RAV4 has been outstanding over its past generation. Consumer Reports predicts the 2019 RAV4 will score 4/5 for reliability. A long legacy of Toyota quality says it will do well. 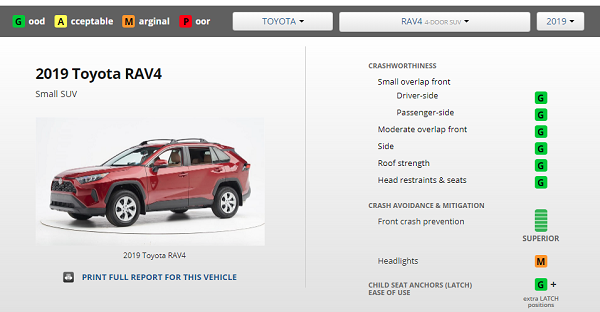 In the past generation, Toyota did not reinforce the passenger's side to the same level of safety as the driver's. The Insurance Institute For Highway Safety scored the RAV4 Poor on the important small frontal overlap crash test. For this new generation that changes and now the RAV4 earns a score of Good on all crash tests. Unfortunately, the 2019 RAV4 is not a Top Safety Pick due to its score of Marginal on the headlight tests conducted by IIHS.

Shoppers will find that the RAV4 has a strong active safety suite standard. Other safety items like rear cross traffic alert with braking are trim-dependent. Stepping back, let us say that the Toyota RAV4 is a very safe vehicle. However, there are more highly rated crossovers this size. Both the Subaru Forester and Mazda CX-5 earn the Top Safety Pick Plus designation. We are surprised that Toyota did not match those scores.

Toyota's RAV4 isn't the strongest performer or the best-handling crossover in this segment on-road. That would be the Mazda CX-5. Nor is the RAV4 the best off-road. That would be the Jeep Cherokee Trailhawk or Subaru Forester. However, the RAV4 has no weaknesses. Its real-world acceleration feel is in line with the segment's average or better, and the XLE on "regular profile" 17-inch tires was never harsh over broken roads. Steering is good as is braking. The RAV4 also has multiple drive modes including a Sport and Snow Mode. 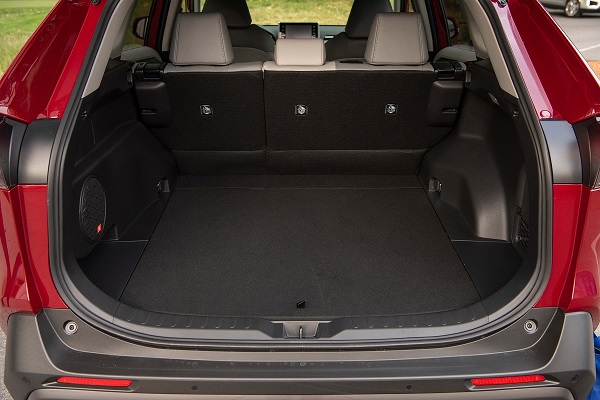 Our XLE AWD RAV4 had cloth seats. At $33,699 this was a disappointment. We've tested all of the RAV4's peers in this price range and they all had leather seats. Also, the lack of Android Auto is a concern in terms of resale value. The Toyota warranty is much shorter than Hyundai, Kia, and Volkswagen's. On the plus side, the RAV4 comes with two years of scheduled maintenance. 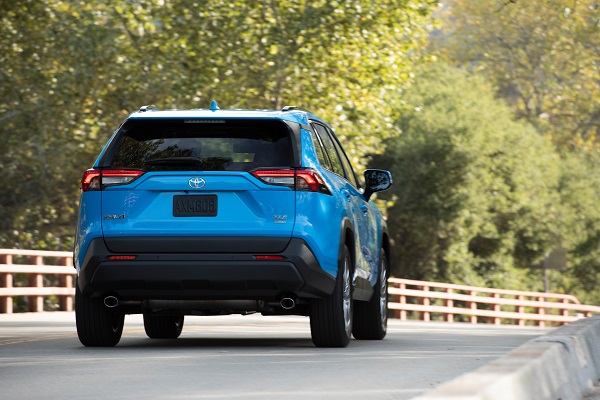 The RAV4 has been a top-seller for years. It will likely remain so. Toyota's legendary reliability has real value. Toyota's design direction with the RAV4 is more along the lines of an SUV than a car-based crossover. Those who want a classier looking crossover with better performance may wish to cross-shop the Mazda CX-5. Those who want off-road and all-road capability may be interested in what Jeep and Subaru have to offer. Honda's CR-V also has its merits, including more cargo space and a turbocharged engine. We feel the RAV4's pricing is a bit higher than its comparably-equipped competitors. However, Toyota has been discounting more than its peers in recent years. We would look closely at the bottom line before committing our minds and money to a new Toyota RAV4.