What's the price of a Nissan Rogue Wagon by year?

How can you save money on a used Nissan Rogue?

Does car color affect the price of a used Nissan Rogue?

How to save money when buying a used Nissan Rogue ?

Nissan Rogue Rankings vs. the Competition

What Nissan Rogue color has the best resale value ?

What is the best time to buy a used Nissan Rogue ?

What's the price of a Used Nissan Rogue Wagon by year?

Where to find a cheap Nissan Rogue ?

What colors are the best deals for a Nissan Rogue ?

What Is The Average Price Of A Used Nissan Rogue By Model Year?

The Nissan Rogue was introduced in 2014 as an all-new model to compete in the fast-growing and now dominant small crossover-SUV segment. Since then, the Rogue has risen to become the best-selling Nissan model as well as the best-seller in the segment. The 2019 Nissan Rogue continues to be popular thanks to the Rogue's simple formula of offering comfort, safety, and versatility in an affordable package.

The 2019 Rogue adds more advanced safety systems availability across the trim lineup, but otherwise remains as it was last year. Most of the downsides to the Nissan Rogue are not major concerns and haven't thwarted buyers from showing up in droves. That speaks to the importance of hitting the right marks with a vehicle's design.

Customers looking for a roomy interior, large cargo area, comfortable seating, excellent safety scores, and good fuel economy will like the Rogue. Those needing peppy acceleration, an edgy feel, and top-end infotainment technology will not. As the Rogue has proven, most people are looking for practicality and usefulness in the small SUV segments, not flair. So the Rogue remains the best choice for most buyers in that market. And we don't blame them.

The 2019 Nissan Rogue is a small, five-seat crossover-SUV available in three basic trim levels plus a Hybrid model option. A smaller Rogue Sport model is also available, but quite different from the standard Rogue and is thus not reviewed here.
See the full 2019 Nissan Rogue Test Drive Review.

The two-row Nissan Rogue compact crossover is Nissan's top-selling family vehicle. At times it has topped the sales charts in the US for a non-truck model. Buyers have flocked to compact crossovers of every brand, but the Rogue is now the focus of much of Nissan's energy and most of its marketing budget, which is now tied to a Star Wars Rogue One theme.

For 2018 Nissan keeps the Rogue line simple with just four trims, including S, SV, Midnight Edition and SL, the trim we tested. Prices for a base front-wheel drive Rogue start at around $26,000 and a fully-equipped all-wheel drive SL trim will top $35,000. Shoppers will find that these prices are in line with popular crossovers from other brands.

The Rogue has much to offer a family crossover shopper, including solid safety credentials and good fuel economy. Having undergone a refresh in 2017, the 2018 Rogue sees two major changes buyers should know about. First, the optional compact third-row seat has been eliminated. All trims now come with two rows only, leaving the Volkswagen Tiguan and Mitsubishi Outlander as the only two vehicles in the segment with a third-row option.

Second, Nissan has upped its driver assist technology to be in line with Honda's. Nissan's ProPILOT is advanced adaptive cruise control coupled with lane keep assist. Despite the clever name, the system requires hands-on driving at all times. 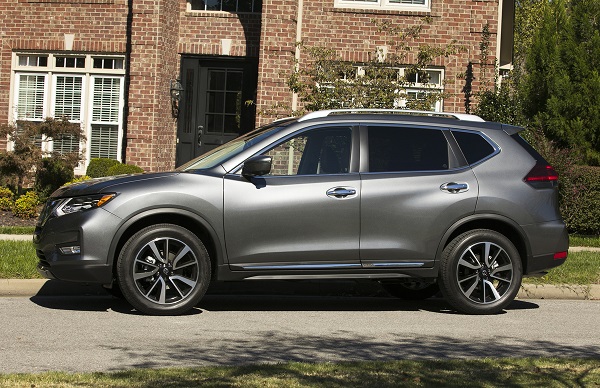 The 2017 Nissan Rogue carries on with the current generation of this compact crossover. Now a best-seller in the segment, the 2017 Rogue has seen some styling upgrades for the new model year, but is otherwise unchanged from 2016. New to the Rogue lineup this year is a hybrid model with excellent fuel economy for a relatively low premium.

The Nissan Rogue is best known for its family-oriented design and high value proposition. There are several Rogue models to choose from, ranging from the generational carryover Select base model to the range-topping Platinum Reserve.

There are many high points to the 2017 Rogue, but in this competitive segment it can pay to shop around since most manufacturers are bringing their A game to market here. Among the excellent choices, the Rogue remains the number one choice of many buyers and there are plenty of good reasons for that.
See the full 2017 Nissan Rogue Test Drive Review.

The Nissan Rogue saw a complete redesign in 2013 and was immediately applauded for its family friendliness and comfort. That remains today, with only small upgrades having to be made in the intervening years. This year, the Rogue sees its telematics system (NissanConnect Services) being added to its top trims. Siri Eyes Free also enters with the base level touchscreen system as well as the upgraded option. Finally, safety upgrades are also added as options for advanced emergency braking.

There is a lot of competition in the small and compact crossover segments. Many excellent entries can be found, but with a third row option, the Rogue stands apart and enters a small league of offerings that many families will find compelling. It's upscale interior will likely make up for forgettable exterior looks. To go with that, driver and passenger comfort is premium level, well beyond what most others can offer. We should note that performance-wise, the Rogue is not a top choice, but most buying in this segment aren't interested in road hugging speed.

Small families will enjoy not only that third row option, but the large amount of usable cargo space and the high fuel economy potential this vehicle has. The Rogue offers a lot to those who need a versatile family hauler that won't break the bank or outsize compact parking spaces.
See the full 2016 Nissan Rogue Test Drive Review.

To sum it up in the most succinct and easy to digest way possible here is our basic summation of the all-new 2014 Nissan Rogue compact family SUV—it could easily qualify for SUV of the year just by dint of being a total and overall improvement over last year's model whose least offensive sins were blind spots capable of hiding jetliners and an exterior design that made it look like a Murano with a glandular condition which never let it outgrow its bulbous baby fat.

We aren't sure how Nissan got back a bit of its mojo with the new 2014 Nissan Rogue but as a matter of fact the only thing we care about is that we never have to drive the old one ever again. This new version is smooth and refined to drive, luxurious feeling on the inside without a huge price hike and can be ordered in a wide array of versions going so far as to offer a third row option best left to kids. But still, kids love those third rows of seats. And Nissan, in their new redesign, was kind enough to even design air vents leading to passengers all the way in the back should your model be so equipped. How thoughtful! And one last note, we won't argue with you for just buying the Rogue based on looks alone.
See the full 2014 Nissan Rogue Test Drive Review.

The 2013 Nissan Rogue is the latest version of a very young vehicle out of the Nissan stable. It debuted for the 2008 model year and is still in its first generation of production. After a minor refresh in 2011, the 2011 and 2012 models had some minor recall issues. Nissan is hoping to avoid those same issues on the 2013 Rogue, but only time will tell that story.

Most consumers looking for a compact crossover should be pleased with the materials quality used on the Rogue but performance seems to be an area where it could use some improvement. There are a few drawbacks, as there are with just about any vehicle, but those flaws don't seem to hinder the 2013 Nissan Rogue's chances of being a fairly strong contender in this class.
See the full 2013 Nissan Rogue Test Drive Review.

How much is a Nissan Rogue?


See below for the average Nissan Rogue price across model years.

The average price for a 3-year-old used small and compact SUV is $22,625, with the Nissan Rogue's price typically $3,583 above average for this vehicle type.


How long do Nissan Rogues last?


Is the Nissan Rogue a good car?