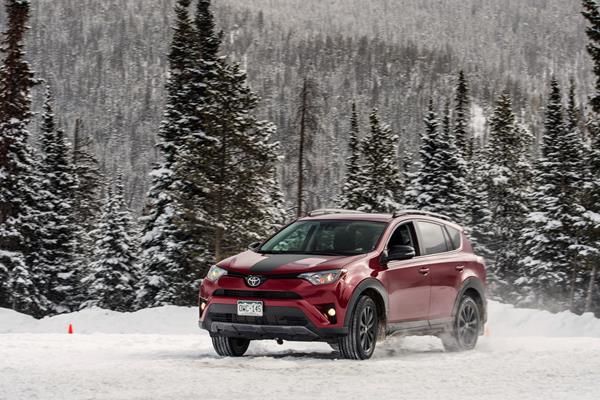 The 2018 Toyota RAV4 isn't much different from the last couple of years, but it's still a mainstay in the compact crossover market. The RAV4 is due for a full redesign for 2019, so Toyota added a new "Adventure" trim level to keep the 2018 model year relevant.

The 2018 RAV4's strong looks remain a reason for its popularity and Toyota's expected metrics of value orientation and well-rounded versatility keep the RAV4 on the radar. The new Adventure trim adds some aggressive aspects to the crossover, aiding its appeal to some buyers as well.

The 2018 Toyota RAV4 is a compelling offering with seating for five actual adults, generous cargo space and the best hybrid option on the market thus far. It's offered in five trim levels with either front-wheel or all-wheel drive. 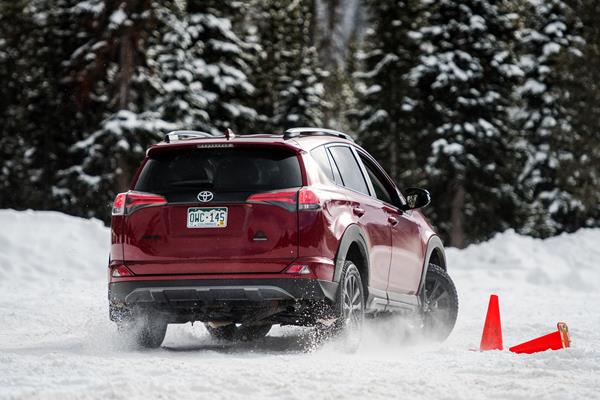 The RAV4 saw updates in 2016 still seen in this model year. The smoother fascias and improvements to exterior appeal were welcome then and are still a good point today. Unlike other Toyota models, the 2018 Toyota RAV4 definitely says "Over here!" with its styling, jumping out as unusually fresh in what is sometimes a boring segment.

The new Adventure trim mostly adds exterior items to the crossover's design. Package-wise, the Adventure is almost identical to the XLE (slotted just above the base model) in terms of what's included, but adds about half an inch of ground and wheel-well clearance for a more aggressive look. The Adventure also adds small styling points to the mix for a more off-road-looking effect for the RAV4. It also gets access to the Cold Weather package otherwise reserved for higher trim levels.

Interestingly, the 2018 RAV4 SE trim level also sees some of the Adventure trim changes, namely the ride height. Shoppers who want more clearance but not the Adventure package's other updates might consider that as an option.

The 2018 RAV4 has a great look in all packages, with plenty of variance in paint choices and trim points. We're looking forward to the changes coming for the all-new 2019 model, but think that this new 2018 is well worth shopping.

The 2018 Toyota RAV4 has a bit of a throwback interior, reminiscent of cutting-edge interior design six years ago. Today it's a bit outdated, with some elements like the oddly-shaped dashboard and strangely non-useful cup holder ahead of the shifter, but remains appealing because it's very different from most other offerings in the compact crossover market. 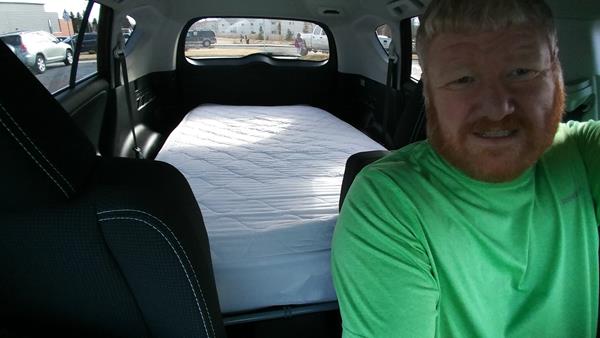 Materials quality in the RAV4 is good. Most of the flat and hard plastics are reserved for lower trim levels and simpler items in the cockpit that won't be handled often. The RAV4's greatest interior element is its roominess, with seating for five adults and an open feeling throughout the cabin.

The seating in the 2018 RAV4 improves with trim point, with the base-level offering having decent but not stellar seating and higher-end trims having much more comfort in their design. The Adventure package we drove was on par with the lower-end offerings in this segment, but nothing like the high comfort levels found in the Limited and Platinum trims for this model.

Cargo space is another shining point for the 2018 Toyota RAV4's interior. It's not large by segment standards, but it's useful thanks to a flat-floored design and wide girth. There are 38.4 cubic feet available with the rear seats up and 73.4 cubes with them folded. The rear seats do not fold entirely flat, which may impede some larger items from getting inside the RAV4. Most normal items such as bicycles, small furniture, etc. will be fine. We managed to fit an entire twin bed, with mattress and frame, into the Adventure model without too much uncomfortable seat rearranging.

Technology is one point where the 2018 RAV4 falls behind compared to others in the segment. Even in the Toyota lineup, there are better versions of Entune infotainment.

Entune is a good infotainment offering with an easy-to-learn interface, but it's somewhat outdated in its graphics quality and capability in the RAV4. The 6.1-inch touchscreen seems small for today's market and the 7-inch screen upgrade is only marginally better.

We are big fans of the Toyota Entune voice recognition system, which has great functionality and fast responses. It's is easy to use and rarely misses a phrase or command.

There are several upgrades that come with the more expensive and bigger infotainment option, including integrated apps like Yelp and Facebook Places, functionality like Siri Eyes Free integration and so on. There is still no Android Auto or Apple CarPlay option, but we like the 360-degree backup/parking camera system.

The 2018 Toyota RAV4 also has a large driver's information display available that sits in the center of the instrument cluster. This upgrade comes with the infotainment upgrade and adds a lot to the RAV4. Most of the information on the infotainment is shown in simpler form on the driver's info display, including navigation prompts and radio tuning.

Fuel economy in the 2018 RAV4 is EPA-rated at 23 mpg in the city and 29 mpg on the highway for the standard gasoline version, and 25 mpg combined. Those numbers drop slightly to 24 mpg combined (22/28 city/highway) for the all-wheel drive models.

Our numbers in the 2018 Toyota RAV4 Adventure model equipped with heavier winter tires were below EPA estimates in our week-long drive, averaging just 21 mpg overall. 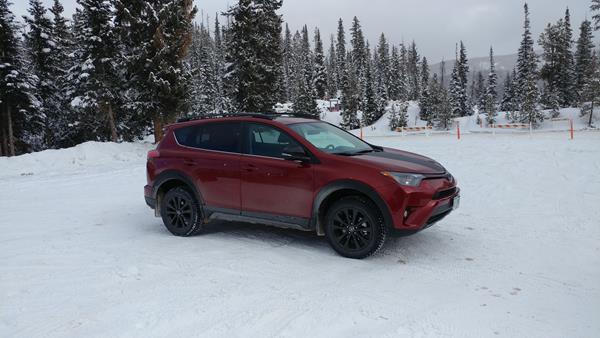 There are not any reliability expectation publications for the 2018 RAV4 as of this writing, but because it is functionally unchanged from the 2017 model year, we can use those numbers as a guide. The 2017 RAV4 was rated as "Better Than Most" on the J.D. Power and Associates Vehicle Dependability Study and we expect that rating to carry forward to 2018.

There is nothing to fault about the 2018 Toyota RAV4 and its safety expectations. The National Highway Traffic Safety Administration gives the RAV4 five stars for its overall crashworthiness rating, with four stars each for frontal and rollover and five stars for side crash tests.

The Insurance Institute for Highway Safety gives the 2018 Toyota RAV4 a Top Safety Pick rating with top scores of "Good" across the board for all crash tests on the vehicle.

The 2018 Toyota RAV4 isn't a race car or even a moderately good sports vehicle. Its focus is on fuel economy and that really becomes obvious with daily driving. The 2.5-liter four-cylinder engine is mated to a six-speed automatic transmission. The engine's 176 horsepower output seems like more than enough on paper, but the power band is relatively high up the RPM gauge and is only rarely seen. The 2018 RAV4 is not terribly sluggish about getting places, but it's never in a hurry either.

The propulsion and drive quality of the RAV4 are average for the segment's more fuel-conscious offerings, but do little to give the driver confidence when pushing to merge on a freeway or hurrying through a light. Hill climbing and passing at higher speeds are doable, but not exciting or fun exercises in the RAV4.

In town, the 2018 RAV4 is generally a good little drive with plenty of maneuverability and lots of visibility for the driver. On the highway, noise levels are acceptable in most situations.

The 2018 RAV4 is more expensive than most of its peers, but generally more well outfitted. The base price alone shouldn't be the decision maker in shopping the compact segment, as cheapening the vehicle at its base level to game the price war is not likely to result in a vehicle anyone would buy. Instead, look toward the middle-tier pricing for the RAV4 and its competitors, comparing the XLE, Adventure and SE models against others for apples-to-apples content and price point.

Most buyers will be fine in a front-wheel drive (FWD) Toyota RAV4, with its lower price and still-excellent get-around capability no matter the weather. Those living in areas with more extreme weather should get the AWD model. Those living and mostly driving in urban and suburban environs should look into the Hybrid model as the best offering available for the segment.

Buyers in the 2018 model year will also likely benefit from the new 2019 model being introduced for sale later this year. That all-new model of the RAV4 will mean the current generation will be a hot item dealers want to push off their lots to make room. Capitalizing on that could mean a great deal. 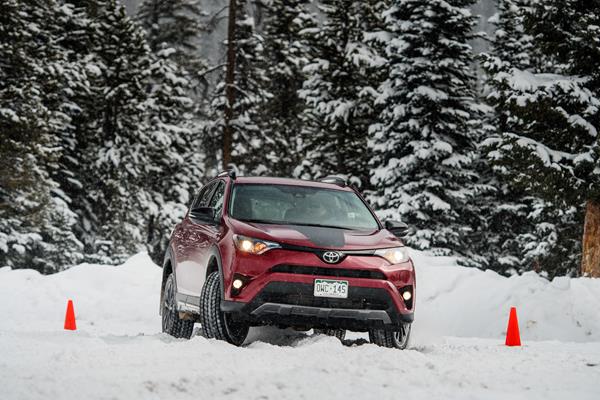 The 2018 Toyota RAV4 comes in with a good overall score. There are a lot of high-scoring competitors to consider and we'd suggest checking all of them.

The Mazda CX-5 is sporty and much more ergonomic the RAV4, but lacks a hybrid option. Similarly, the Hyundai Tucson offers a more sporty drive and better on-road feel, along with a segment-leading warranty. The Ford Escape is worth noting for its family friendliness and fuel economy to go with its turbocharged engine options. The new Nissan Rogue Sport is also worth considering for its well-rounded appeal and Euro-style fun.

With those in mind, the 2018 RAV4 does offer a lot for the money spent. Its high reliability expectation, great safety items and fun exterior are just the start.