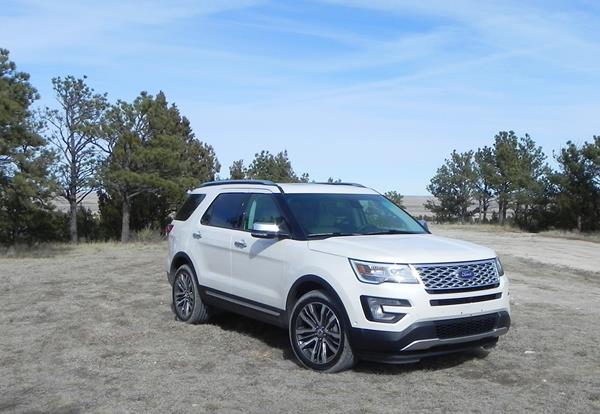 The Ford Explorer has been a long-time entry into the sport utility market and its name is virtually synonymous with SUV. It's grown and evolved since its introduction, becoming a more contemporary 3-row crossover-SUV for the mid-sized market. It's at once a family machine and sporty sport utility, though the latter depends on some options.

The Explorer has three distinct engine flavors for three different SUV experiences. The base is a good all-around choice, the turbo-four is a good mid-level fuel-efficient choice, and the turbocharged V6 is almost Mustang-like in its performance. So there's something to suit everyone.

Inside, the Explorer has plenty of space and, depending on configuration, a good amount of passenger room as well. We're fond of the Explorer's infotainment and safety options. There isn't much to dislike about the Explorer until you get into the details. 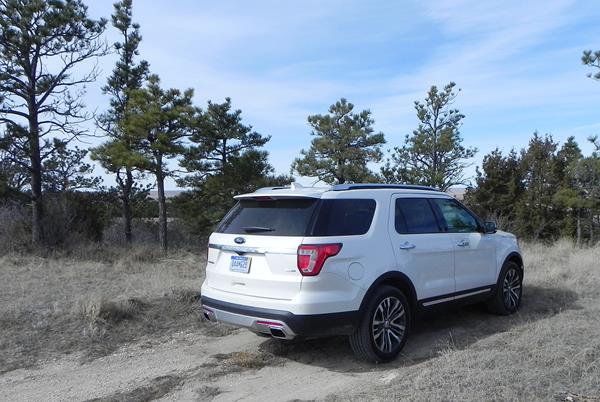 The previous-generation Ford Explorer pioneered the wraparound rear glass look for modern sport utility vehicles with its floating roof design. That and other design elements, such as the overlapping hood (Range Rover style) and straight-edge modern design are now near-hallmarks for the SUV. the 2017 Ford Explorer has all of those elements as well as a less obtrusive grille, more balanced-looking headlamps and a C-shaped set of LED foglamps as an option.

From front to rear, there's no mistaking the Explorer to be a traditional SUV with its truck-based attitude. The straight-cut features and large bumpers attest to its capability and strength. Some may not find this to be the most likable style available on the market, but the 2017 Explorer's sales figures say that a large segment of the population does like it.

Deleted pillars at front and in the center create a canopy-like roofline over darkened glass. This is especially emphasized in the lighter color options, as seen in our test model. High ground clearance and a solid body promise capability on or off the road and the large hood and big front fascia say that the powerplant in the 2017 Ford Explorer will be muscular.

The materials quality inside the 2017 Ford Explorer is excellent for the class and only gets better as the trim levels increase. Top-most trims like the Platinum edition are firmly into luxury vehicle territory with their quality and look. Comfort is a prime motivator for the Explorer's interior and that shows.

Front seating is very well done with easy ingress and egress from wide-opening doors with plenty of head clearance. The seats are wide and accommodating without being too loose, cradling just right. Even the lower trims for the Explorer have good amounts of adjustability in seating and steering to match most driver's needs. The front passenger is similarly accommodated. 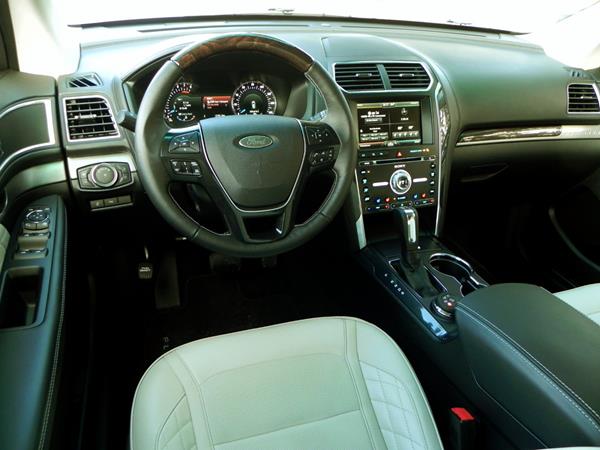 On the highway, the 2017 Explorer is quiet and forgiving, with a good amount of suspension absorption for the road and excellent interior acoustics.

The latest rendition of Ford's Sync3 infotainment platform adorns the dashboard of the Explorer. Touch-sensitive buttons, which were never popular with consumers, are now more traditional hard buttons and knobs. Between the touchscreen and its bright display and excellent response times for infotainment and the easy-to-use standard buttons for everything else, the Explorer is now top shelf in terms of tech options.

At the base level, the Sync system is voice-activated and centered on a tiny 4.2-inch screen. After the base trim, in the XLT and above, the larger 8-inch touchscreen with the full Sync3 suite of apps is either available or standard (Limited trim and above). That includes a lot of connectivity and usability options such as smartphone app integration, cloud services, and more.

The 2017 Ford Explorer has varying fuel economy, depending on the engine chosen. In most cases the Explorer's average fuel economy is on par with or better than the segment average.

The upgraded V6 turbo in the Sport model (available in other trims as well) is EPA rated at 16 mpg in the city and 22 mpg on the highway in 4WD. 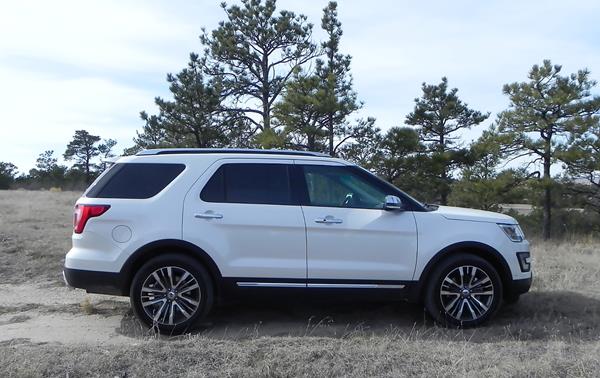 The Ford Explorer has a mixed history in terms of reliability. The 2017 model is rated as "About Average" by the J.D. Power and Associates Vehicle Dependability Study. A recall has been issued for the 2017 Explorer for an engine cooling problem in the turbocharged models. This also does not bode well for expected reliability.

A host of driver assistance features and active safety techs are added or available in the upper trims. However, the 2017 Explorer has mixed results in crash testing.

The National Highway Traffic Safety Administration (NHTSA) gives the Explorer a 5-Star overall rating, with five stars on front and side crash tests and four stars in rollover testing. This is only slightly consistent with insurance tests.

The Insurance Institute for Highway Safety (IIHS) rates the 2017 Ford Explorer with its top score of "Good" in the moderate overlap, side impact and roof strength tests. As of this writing, it was not rated for rear crash tests and scored only a second-worst "Marginal" in the small overlap front test.

There are three engine options and two drivetrain options for the 2017 Ford Explorer. The engines are mated to an automatic transmission tuned specifically to the drivetrain choice, which can be front-wheel drive (FWD) or 4-wheel drive (4WD).

The base engine is a 3.5-liter V6 that outputs 290 horsepower and 255 pound-feet of torque. This engine is good for the 2017 Explorer, though sluggish when compared to the turbocharged options that can be had.

Two engines from the EcoBoost family are optional for the Explorer, starting with a peppy little 2.3-liter inline 4-cylinder that outputs 280 horses and 310 lb-ft. Turbocharging means that the torque comes early, at just 3,000 rpm, making this version of the 2017 Explorer feel very fast on the uptake. This engine is also the most fuel-efficient of the options (see above). 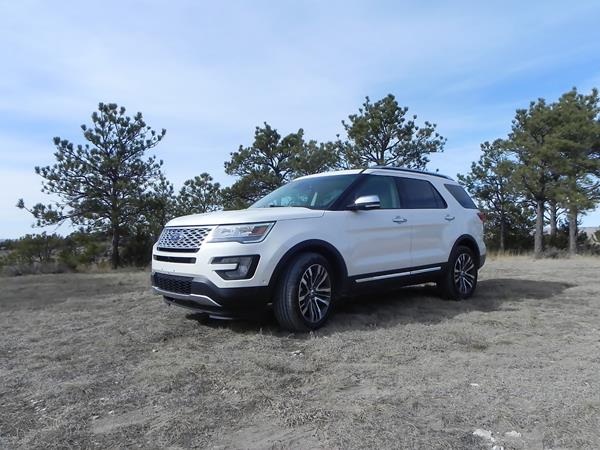 Finally, the sportiest option for the 2017 Ford Explorer comes in the 3.5-liter EcoBoost V6 with its 365 turbocharged horses and 360 lb-ft of twist. The Sport model uses this engine plus some suspension changes and transmission tuning to really emphasize the sport in sport utility. Other models don't have those changes but are still fast-paced and muscular compared with the other two engine options.

Performance in the 2017 Explorer ranges from "carpool ready" with the base engine to "family-sized Mustang" with the turbo V6. On the road, the Explorer is surprisingly quiet until the throttle is pressed, and it rides smoothly over bumps and road imperfections. The Sport model is a bit stiffer than the rest, but that's to be expected given its focus.

Off the road, the 2017 Explorer is competent in most light- and medium-duty tasks. This isn't a mud-slinging SUV or a rock climbing rig, but it's definitely capable of getting you to that remote cabin or down that dirt road in the rain. Driving modes for snow, off-road, etc. are nicely tuned to make the Explorer feel much more confident in varied conditions.

Around town, the Explorer can be a bit gangly for its size, feeling bigger than it should when maneuvering in tight quarters. Rear visibility is part of this, though the camera system does go a long way in helping with this.

Historically, the Ford Explorer has held a resale value that's about average for the segment. Midsize SUVs are popular but also common. Most buyers are in the crossover side of things, but sport utilities hold appeal for a broad base of buyer as well. The purchase price value for an Explorer in the 2017 model year is pretty good.

The base price is low, but few buy the base model Explorer. Most purchases will be in the mid-range trims such as the XLT or Limited in the $35,000 to $40,000 range of MSRP. In most markets, the 4WD models have a better resale potential. 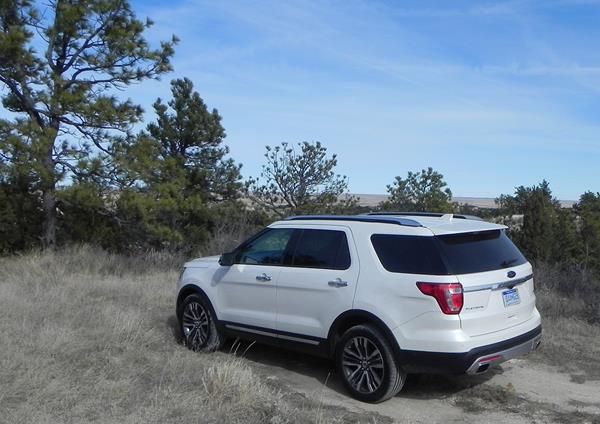 In the midsize SUV segment, there are plenty of competitors for the 2017 Ford Explorer. The Dodge Durango is a popular choice with exterior looks that rival the Explorer's great physique. The Durango has a larger second row, but poorer fuel economy. The GMC Acadia competes with the upper trims of the Explorer well, though engine options aren't as robust. The Honda Pilot is another solid choice in the midsize segment, with a more family-friendly interior but less exterior pizzazz.

All around, the 2017 Ford Explorer is a solid SUV offering with plenty of something for everybody. We like its versatility in engine choices and trim levels and are fond of the Explorer's great look and high-end technology offering. This SUV is well worth keeping on the short list when shopping.