Most of the cars that we review here at iSeeCars.com are capable enough of being good enough to please most drivers and often times we find that the least expected models wow us and we fall head over heels in love. That, dear readers, did not happen during our time driving the at least disappointing and at worst the laziest engineering job in recent memory 2014 Toyota Corolla. Apparently we drove the sporty S version but only felt our desire to ever want to enjoy the act of driving being sucked from our chest, the luxuriously beige LE model, the LE Eco version which boasted one engine design enhancement so Toyota could boast 40 miles per gallon highway and the lowly $16,800 S price leader which comes with a four-speed automatic.

Don't we recall Honda being raked over the coals for continuing with a five-speed automatic in the 2012 Civic? We guess Toyota, at times the largest and most technologically amazing car company in the world, isn't expected to bring much to the table anymore with its compact sedan. And to think, the Corolla nameplate is one of the longest lasting in the industry and should at this point deserve respect not only from buyers but also from the management at Toyota that so botched this latest redesign.

But hey, if you don't care about the state of your everlasting soul, if the act of driving is something you feel should pain you somehow or outright reliability is seriously the ONLY thing you care about then by all means check out the 2014 Toyota Corolla line. All we can say is that after just one solid day driving the Corolla we wondered seriously if we really were all that into cars and driving. Thankfully we had a Mazda on hand to perform automotive resuscitation of us before we decided to join a monastery. 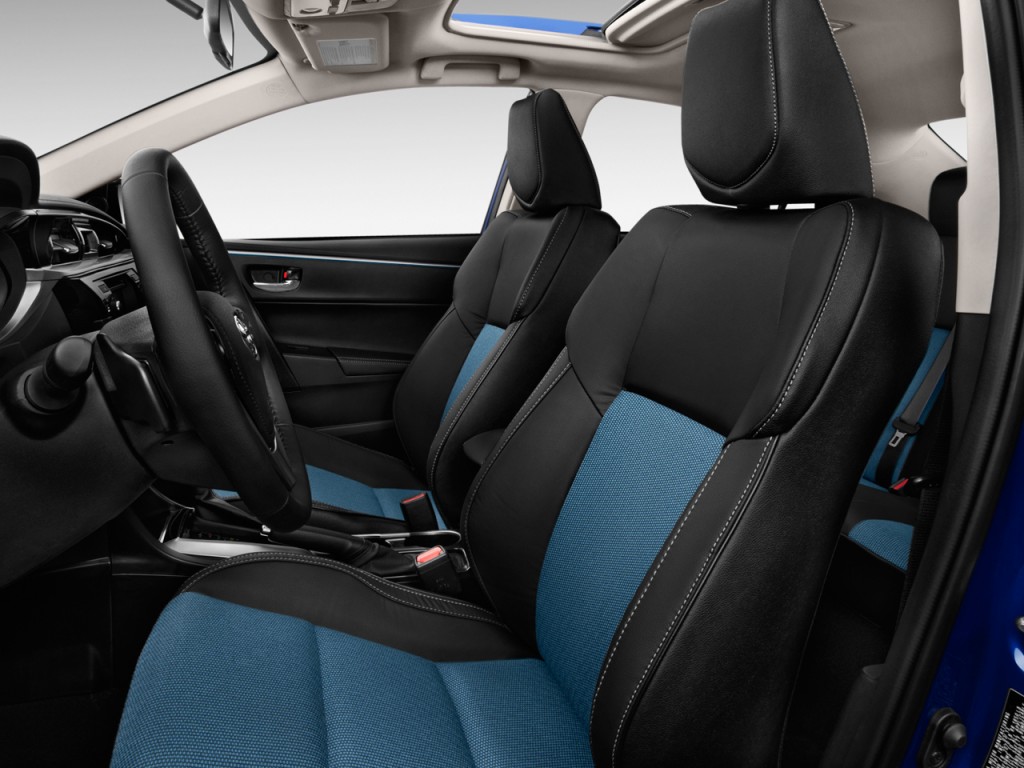 What Was Okay about the 2014 Toyota Corolla

What We Didn't Love 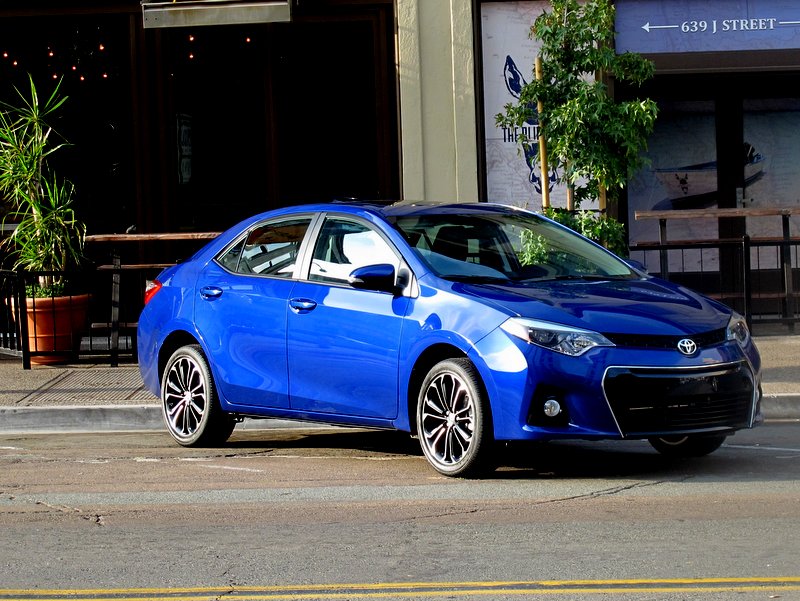 Now, the 2014 Toyota Corolla isn't a willfully ugly car per se it just lacks any points of imagination or interest anywhere in the design. It's like style catering to the lowest common denominator so that no one will ever gaze upon it and be offended and no one will be excited either. And while this was okay a few years back, models like the Hyundai Elantra, Kia Forte and latest Mazda3 all show the Corolla up in exterior appeal with the sad Toyota left looking a little like a dork wearing a pocket protector. The exterior was not styled but rather born of some complex mathematical equation and the assistance of a slide ruler. If geeks shall inherit the Earth, so shall the Corolla.

Interior Comfort, Quality and Overall Ease of Use (5 out of 10)

If you order the S model or an option package on the LE you will be treated to a dashboard with a nice large Entune screen that makes all of your infotainment needs easy to access and the climate control design is classy and functional. But then you notice little quirks that we think might drive owners insane over time like the high side door sills that have odd indented valleys where the power windows disappear into should you decide to let passer- by see what you are driving.

Taken in bits, the new Corolla dashboard seems like an improvement in quality and usability but then yet another quirk—the design team has created the oddest dramatic cliff which does not come in full contact with the door so it leaves a tiny gap for things to get stuck in. Perhaps the designers were so starved for a redesign budget they were considering throwing themselves off a cliff and the 2014 Corolla's dash design was the result? 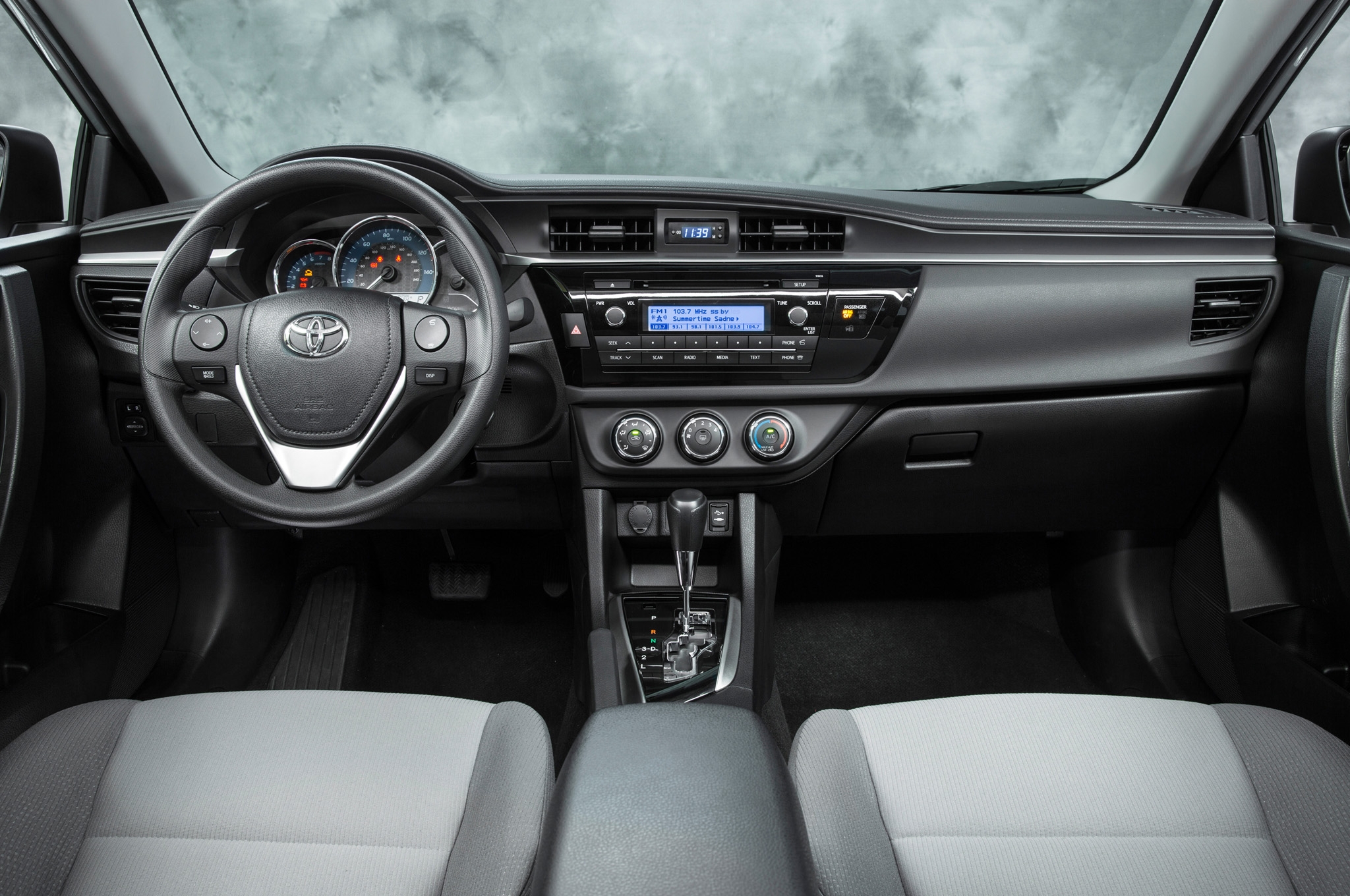 One thing Toyota did improve upon (apparently they asked owners of older Corolla models what to fix) and that is rear seat comfort. Not only does it have just the right amount of cushioning but it also has a nice flat floor where even people with big feet will have room to get comfortable. So clearly, being in the Corolla's driver's seat is not your optimum choice. We also were not all that impressed with some of the materials choices made by Toyota for the interior.

Now, for a car that is known to be kept by owners for 20 years the use of piano black trim all across the dash of the S model seems a bit risky given how hard that stuff is to keep clean. Also, without the Entune screen front and center the Corolla's dash looks very, very cheap. Also, one last piece of advice if you plan on buying a Corolla S—order the black cloth or Sof-Tex faux leather because otherwise you will have to live with cloth seat s enhanced by fabric that is either the color of smurf skin or the color of what happens when you ride too many rollercoasters after a big lunch.

Compared to cars like the 2014 Honda Civic which sync so completely with your smart phone that they can use your apps and functions like Siri for the iPhone, the 2014 Corolla's Entune system is rather simple in what it can do. But the sad thing is, to even get that screen you have to shell out a lot of extra coin or face decades looking at the most plastic fantastic dashboard in this class. Honestly, as with each category Toyota could have tried harder. Lastly, Toyota, the cheap and cheezy digital clock mounted up in the center of the dash looks as dorky and as hi-tech as those calculator watches that were popular in the 1980's.

Did the whole Hyundai Elantra EPA mileage scandal teach automakers nothing? All CVT or automatic transmission equipped Corolla models have numbers ranging from 27 city/36 highway (L base) to 29 city/38 highway with LE models. But thanks to the one small engineering contribution called Valvematic technology made to its engine compartment the LE Eco is rated 34 city/40 highway. Essentially this is a variable valve lift system which is a concept that has been around for quite a while. But how much do you want to bet that in the real world that difference won't amount to much for real owners?

And if you want to get 42 miles per gallon rated on the highway you can order the special LE ECO CVT model but not the LE Eco Plus or LE Eco Premium which will do little but confuse shoppers and make it nearly impossible to find the exact model they want on a dealer lot. Simplify here a bit Toyota, you trim levels are confusing simply to those who want good fuel economy and that is a bad sign. 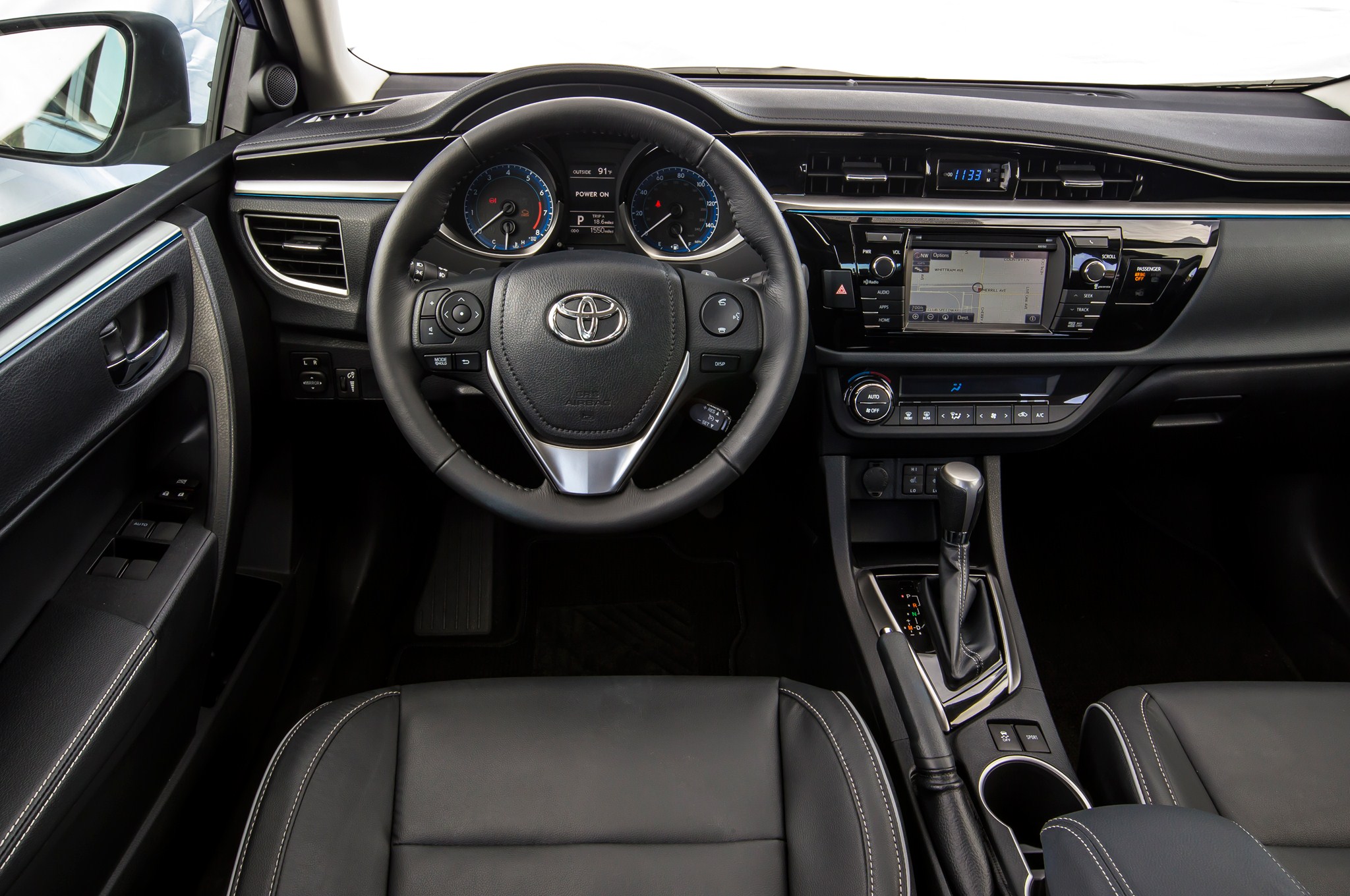 This is a Corolla and this is the one section it has consistently proven that it is a vehicle to be trusted. Especially given how few changes Toyota made mechanically, this Corolla should last you forever should you crave eternal torment.

The 2014 Toyota Corolla was named a "Top Safety Pick" by the IIHS (Insurance Institute for Highway Safety) but that doesn't tell the whole story. In the IIHS small overlap front crash test meant to mimic an impact with something like a tree or pole, the Corolla did not do very well. In fact, it only scored a Marginal rating which is just a bit over the lowest score. And don't think that's judging the small Corolla too harshly as both the 2014 Mazda3 and 2014 Honda Civic got "Top Safety Pick Plus" ratings after doing very well with that test.

Bringing the Corolla down even further is the fact that you have to order your Corolla in S trim pretty much fully loaded to get four wheel disc brakes. Yes, dear readers, the rest of the Corolla lineup makes do with drum brakes with are simply a cheaper and inferior design. During our drive we noticed substantial brake fade after a number of simulated panic stops.

Having to relive the disheartening driving experience we suffered through when behind the wheel of the 2014 Toyota Corolla is not something we looked forward to. This car was so wallowy, noisy, slow and lacking in any form of visceral engagement that it quite literally made us depressed. Never before has a vehicle's driving characteristics made us reach for some Prozac. No car should be such a downer that you actually feel bad driving it.

Granted, some people have no interest at all in how a car drives but we aren't those people. The Corolla's carryover 1.8 liter 132 horsepower/125 lb. feet of torque 4-cylinder is down on power compared to most all the competition and when mated to the CVT it goes straight to its moaning redline and stays there. Well, the CVT has to because otherwise this car would get run off the road by pretty much anything on four wheels besides perhaps a Yaris.

Steering feel was extremely numb but not in a good, Pink Floyd sort of way because at no point did we feel "Comfortably Numb" piloting the 2014 Corolla. Also, the interior suffers from too much tire roar and suspension thumping on the freeway. Overall, one of the least pleasant cars we have ever driven.

The 2014 Toyota Corolla seems like a solid value when you see that its base price is only $16,800 and each and every one comes equipped with Bluetooth, power 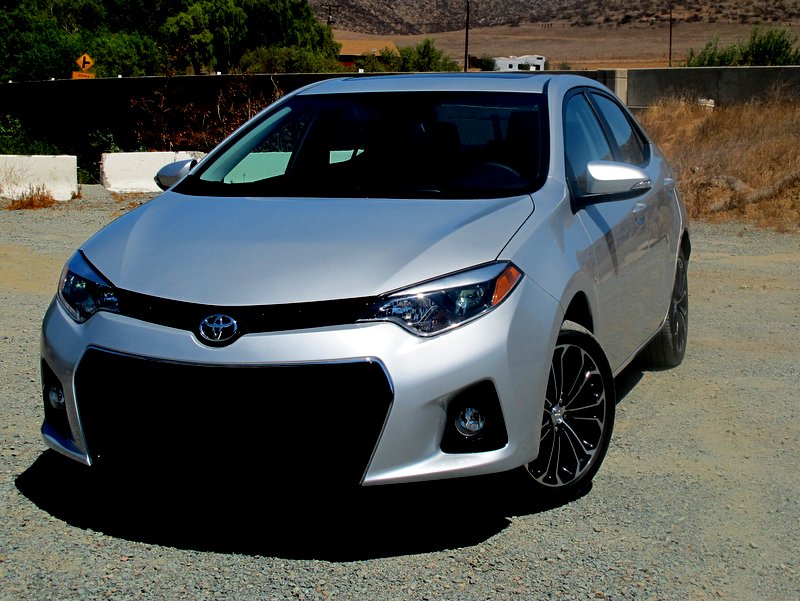 windows, door locks and mirrors, air conditioning, a tilt/telescoping steering wheel (still rare) as well as an AM/FM/CD player with USB/i-Pod connectivity. But that price is for a model with a six-speed manual which few Corolla buyers opt for so plan on forking out extra for the privilege of the pre-historic four speed automatic.

Sane buyers will move at least up to the LE which knocks the price up past $19,000 and nets you the CVT automatic transmission, automatic climate control, a rear back-up camera, color keyed heated power side mirrors, and a wider array of choice in seat fabrics some of them quite bizarre. But to get basics like alloy wheels you have to pony up for a Plus model which then allows you to order the Entune system all bundled in with a sunroof, navigation, Bluetooth music streaming, XM/Sirius radio, Pandora capability, push button start and pretty much everything the competition offers at a similar or lower cost. Adding the top level trim to the LE model bring the price to nearly $22,000 and if you move up to the sporty S trim fully loaded you will approach $24,000 before you are through ticking option boxes. A Mazda3, Chevy Cruze, Ford Focus, Dodge Dart, Kia Forte EX and Honda Civic offer more value and are more enjoyable to drive.

We would recommend you look at the more stylish, fun to drive, better built, more fuel efficient and better value 2014 Mazda3 first and foremost with the Honda Civic proving to always be a wise alternative to a Corolla. The 2014 Volkswagen Jetta with the new 1.8 liter turbo motor is about as fuel efficient as the Toyota but twice as fast and less expensive too. We also really enjoyed our time in the 2014 Kia Forte and, heck, we even enjoyed the 2014 Mitsubishi Lancer a great deal more and that car hasn't changed in what feels like a decade.

We know Toyota can do so much better because they do with all of their other models—but we suppose that just like in life Toyota has suffered its inevitable epic fail. 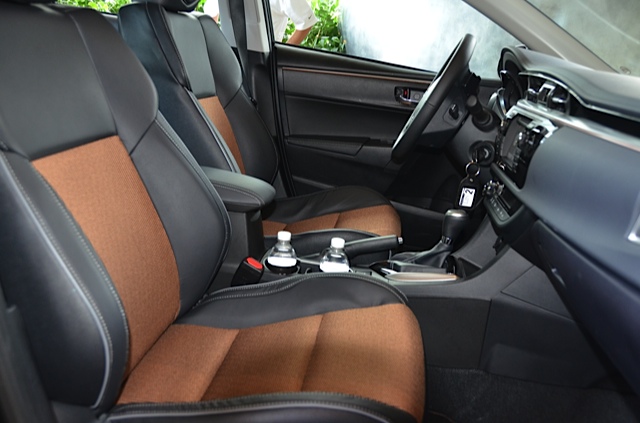