What Is The Average Price Of A Used Mazda Mazda3 By Model Year?

The Mazda Mazda3 is a compact car sold since 2004 and now in its third generation. Known for its versatile nature, sporty attributes, and low price of entry, the Mazda3 is sold in both sedan and five-door hatchback body styles. The first-generation 3 entered the market in 2004 and competed well as an entry-level car with a more premium appeal. The sporty handling and fast-paced styling were popular, especially in Canada. This first-gen Mazda3 shares many attributes with the Ford Focus, which was designed alongside it during Ford's partial ownership of Mazda. A second-generation of the Mazda Mazda3 came in 2009 with an all-new design and a continued evolution of the platform and underpinnings. A second, larger four-cylinder engine was offered as an upgrade option during this generation. Transmissions remained as either manual or automatic, but differed depending on the engine chosen. Four-, five-, and six-speed automatics were offered as were a five- and six-speed manual. A SKYACTIV update for the Mazda 3 came in 2012, changing the platform dramatically and adding higher-output, high-compression, high-efficiency engines. These became standard in the 2014 model year with the third-generation of the Mazda3. This move also pulled the Mazda away from the Ford Focus it shared a platform with until this point. Ford had since dropped its stake in Mazda due to restructuring after the 2008-09 financial crisis. Higher fuel efficiency and better performance are hallmarks of this current-generation 3. Common complaints for the Mazda Mazda3 center on the 2010-2011 model years in which clutch failures for manual transmissions can happen at relatively low mileage (under 40,000 on the odometer). The 3 otherwise enjoys a strong reputation for reliability.

The 2016 model year brings slight changes to the Mazda 3, most of which are fine tuning its market position rather than making real changes to this stellar little car. Available in either sedan or hatchback ("wagon") form, the Mazda3 is a truly great compact.

Standard this year is a rearview camera along with several trim upgrades to add driver convenience. The 3 continues forward with its award-winning interior, spirited drive, and high safety standards to include advanced features not often found in this segment.

This car, especially in its roomy wagon format, is a definite top choice that should be on every compact car shopper's list to test drive.
See the full 2016 Mazda MAZDA3 Test Drive Review.

In the 1980's singer Tina Turner released a song called "The Best" where she proclaims to the world, in that way only she really know how, that her love truly is the best on this planet. Period, end of statement and no further discussion meaning don't question Ms. Turner. Now, this song and its sentiment came rushing to the forefront of our minds just moments after embarking on our first drive in a 2014 Mazda3 iGrandTouring with the six-speed manual transmission.

Sure, we test cars all the time costing 3 to 4 to 5 times as much as a Mazda3 costs but does that really make them better cars? Will they make you a happier person, can they literally bring a smile to your face so honest and true that no disappointment on Earth could bring you down? Or are they just overcomplicated techno-barges more about expressing the size of one's personal ego and wallet than in how much you enjoy driving. The 2014 Mazda3 will always make you enjoy driving. Plus, it is economical, affordable to buy, proven to be reliable, class leadingly safe, strikingly handsome and features the first truly upscale and minimalist compact car interior.

It is, in short, our pick for the best compact car for 2014 and let's just say that it won by a country mile. If we were in the market for a new car, we would buy a Mazda3. Most specifically a 2014 Mazda3 iGrand Touring with the 2.0 liter 155 horsepower/150 lb. feet of torque engine mated to the six-speed manual gearbox in the five-door hatch body style. Preferably in red, Mazda. Our test vehicle was the sedan variant of our aforementioned dream Mazda3 and even came in the automaker's lusciously sinful Soul Red Metallic exterior color. All in our fully loaded Mazda came to an amazingly reasonable $22,745.

But you can, of course, go further when specifying your Mazda3 or buy one that is less expensive with none of the gadgets our tester came with. The sedan version can be had for as little as $16,945 with the five-door starting at a few grand more thanks to more standard features. If the 2.0 liter 4-cylinder doesn't sound powerful enough to you then do remember there is always the 2.5 liter 184 horsepower 4-cylinder available as standard on all models designated as "s" instead of "i."

Choosing this motor does, however, force you to choose the six-speed automatic and in sGrand Touring trim prices can reach all the way to nearly $30,000. Admittedly, for that price you get every whiz bang gadget you could imagine as well as the best leather ever to grace a compact car. Yes, ever. Even Mazda's vinyl is better than most other brand's real cowhide. 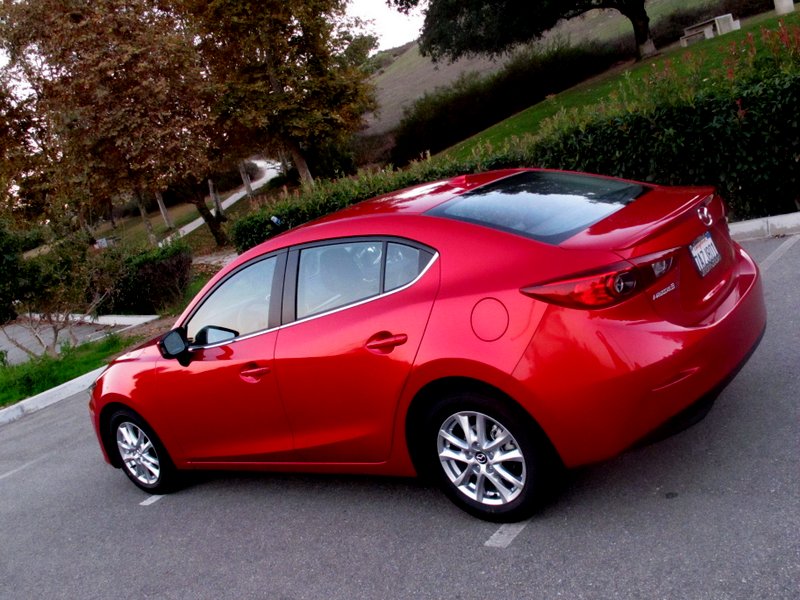 The 2013 Mazda Mazda3 is a compact car that seems to top the list of most reviewers and owners as one of the best in class. It comes available is several versions, including a sedan, hatchback and a diesel option that isn't quite perfected yet. One thing is for certain, this sporty little machine is a load of fun to drive. This means it could be that first-time driver's greatest dream or worst nightmare.

Though it is touted as a sports-car enthusiast's wonder, it maintains surprisingly stable road manners. It is still in its second generation of production, receiving an update and adding the SkyActiv powertrain in 2012. The more you look into it, the more you will find that the 2013 Mazda Mazda3 is built more for performance and pleasure than it is for economy and practicality.
See the full 2013 Mazda MAZDA3 Test Drive Review.

How much is a Mazda MAZDA3?


See below for the average Mazda MAZDA3 Hatchback price across model years.

The average price for a 3-year-old used small car is $17,097, with the Mazda MAZDA3 Hatchback's price typically $1,751 above average for this vehicle type.


How long do Mazda MAZDA3s last?


Is the Mazda MAZDA3 a good car?