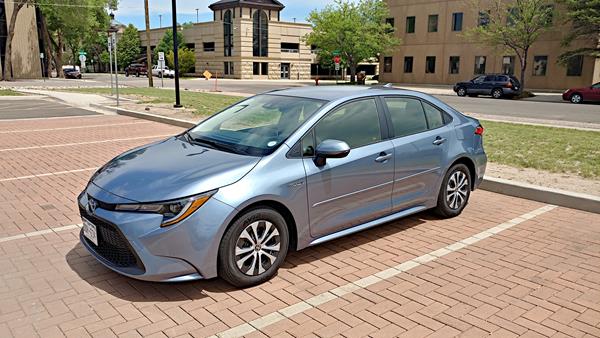 The Toyota Corolla, one of the oldest living models of the Toyota lineup, has been completely redesigned for the 2020 model year. This new rendition of the Corolla addresses many of the shortcomings of the previous generation model and brings the 2020 Corolla into the 21st century.

The compact, entry-level market is heating up with excellent choices and the Corolla now competes well against those modern rivals. The 2020 Corolla has personality and a much more upscale interior to go with its updated efficiency and safety standards.

The 2020 Toyota Corolla comes in three flavors: a sedan, a hatchback (formerly the iA), and a hybrid model. Each are distinctly different, but similar enough that they all bear the Corolla name. All three are more driveable versions of the car than it's been in a very long time.

Aside from those three body designs, the Corolla also comes in up to five trim levels (depending on body style), starting with the L and moving through to the XLE and XSE variants. There are two engines and either a standard or automatic transmission in front-wheel drive.


What We Love About the 2020 Toyota Corolla:


What We Don't Love About the 2020 Toyota Corolla: 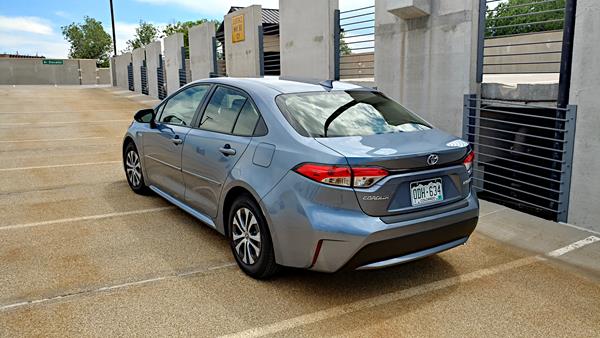 Compared to recent generations of the Corolla, the 2020 model is far more sophisticated in look and appeal. A pronounced intake under the very thin grille, arrowhead-style front lamps, and wheels pushed to the corners add a lot of panache to the Corolla. The fastback rear deck and shortened hood of the previous-gen Corolla remain, but are accented for sportiness by the faster-moving roofline and upward-tilting beltline of the 2020 Corolla.

There are a lot of good lines and there's plenty of movement in the new Corolla and it definitely is the better for it. Color options run towards the drab, however, and nobody would mistake the 2020 Toyota Corolla for a sports car or luxury ride. At that, though, the Corolla does have a persona that is a nice upgrade from its previously unexciting forebears.

As with the exterior, no one will mistake the interior of the 2020 Corolla for a luxury car. They will, however, be pleasantly surprised by the compact's newly-designed and more comfortable seating, the higher-end materials seen in use (especially at the dashboard), and the better design and flow shown inside overall.

Most models of the new Corolla feature sportier seating that adds more comfort without getting skimpy or pinchy on the derriere and back. The dashboard is a bit flat and plain, but not empty of design swoops or materials blends. We like the clear edge between upper and lower console and the way the taller touchscreen breaks up the monotony with its protrusion. Edges around vents and across the top edge add some flair without getting too bling-oriented. 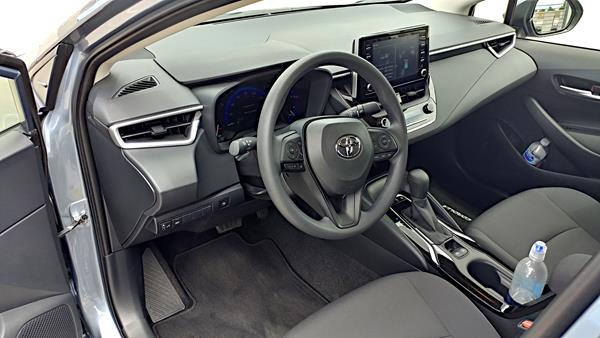 The rear seats are a bit cramped, which is common in compacts, but headroom is at a premium thanks to the new roofline of the Corolla. Most in the segment offer better accommodation there. The trunk in the 2020 Corolla is very large, though, and easy to access with (not quite flat) folding rear seats to add more versatility when needed.

The hatchback model Corolla has better headroom in the rear, thanks to its flatter roof) and far more cargo versatility, of course. Trunk space is a bit smaller in the Hybrid model Corolla to accommodate the batteries added.

The touchscreen in the standard 2020 Toyota Corolla is 7 inches large. Larger screens are now expected in the entry-level segments and the setup in the Corolla is good in that regard. Safety Connect Emergency Communications, Bluetooth connectivity, a Wi-Fi hotspot (subscription required), one USB port, Apple CarPlay, and a 6-speaker audio system are also standard. As are advanced safety features (more on that below) and driver's aids like lane keeping assist.

The 2020 Toyota Corolla has excellent fuel economy for its segment. The hybrid model tops out the list with a 52 mpg combined rating, at 53 mpg in the city and 52 mpg on the highway. Our own testing of this vehicle confirmed those numbers with a 50 mpg average at high altitude.

Engine choice and body style affect the other models of the Corolla. The 2020 Corolla Hatchback with the 2.0-liter engine is EPA-rated at 35 mpg combined (32 mpg city, 41 mpg highway) while the same engine in the sedan model returns 34 mpg combined (31/40 city/hwy).

Dropping down to the 1.8-liter engine lowers fuel economy in the sedan to 33 mpg combined (30/38 city/hwy). The manual transmission yields similar results. 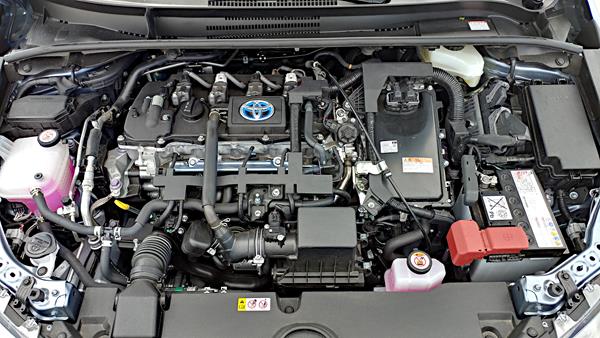 The 2020 Toyota Corolla is all-new, but still receives very high reliability expectation ratings. There have been three safety recalls for the Corolla since its introduction, one for seatbelts (rear), one for mislabeling (compliance), and one for the electronic stability control (reprogramming). All were addressed in 2019.

The J.D. Power and Associates Vehicle Dependability Study (VDS) rates the 2020 Corolla at "Among the Best" for expected reliability. This is due to both the design of the car and Toyota's overall reputation for dependability.

The 2020 Corolla receives excellent safety ratings from both crash testing bodies. The National Highway Traffic Safety Administration (NHTSA) gives the Corolla five (out of 5) stars overall for crashworthiness, including five stars each for frontal and side crash restuls and four stars for rollover results.

The Insurance Institute for Highway Safety (IIHS) rates the 2020 Corolla with top scores of "Good" across the board, with the exception of headlamps, which received a second-best "Acceptable" rating. Notably, the standard frontal crash prevention systems ratinged a "Superior" rating as well.

Standard safety features in the 2020 Corolla include forward collision warning with pedestrian detection and emergency braking. Plus blind spot monitoring, lane keeping assist, and safety telematics for emergency contacts after an incident.

There are three engine options for the 2020 Corolla. The standard engine in the sedan and hatchback is a 1.8-liter four-cylinder engine that outputs 139 horsepower to a continuously variable transmission (CVT). This engine is, as with previous models of the Corolla, barely adequate for the car and often feels sluggish. The CVT doesn't help things, working to keep RPM (and thus output) as low as possible in nearly all scenarios. 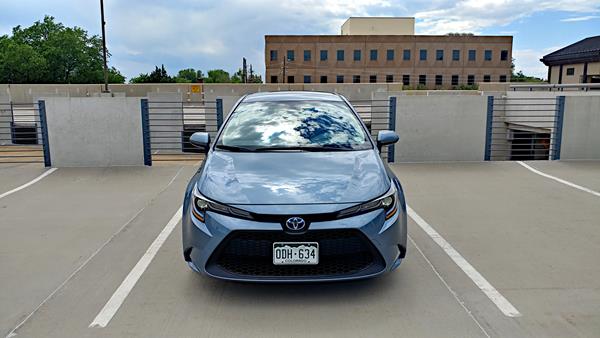 The upgrade in some trim levels is to a 2.0-liter four-cylinder engine that outputs 169 horsepower. This mates to either a CVT or (in the SE model) a six-speed manual transmission. This is a far better pairing for the car and, while not sporty, it does add a lot of confidence to the Corolla's drive quality.

Finally, the Corolla Hybrid model sports the same 1.8L engine as the base model, but detuned to an Atkinson cycle, and paired with two electric motors for a total system output of 121 hp. The motors interact with the attached CVT and the entire hybrid system works very similarly to that found in the Prius. The faster power output of the electric motor plus the added robustness of the system overall makes for a well-balanced drive that's far superior (despite the horsepower loss) to that of the standard-engined base model. Not to mention the extremely high fuel efficiency that the hybrid comes with.

The 2020 Toyota Corolla is priced at about the middle of the field in entry-level subcompacts, but value is added thanks to the higher reliability expectation and the many options for the car. The base model starts at $19,600 with most buyers probably falling in the $22,000 or so range. We like the value proposition found in the LE trim level, with its improved seating materials and $20,000 price tag, but the sportier SE is a more interesting drive with its engine upgrade at $22,000.

Those wanting a confident drive and superior fuel economy will find that the Hybrid LE model, at about $23,000, also shows a lot of value. 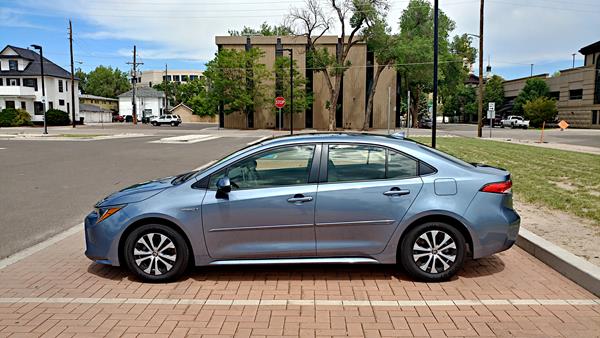 We're scoring the 2020 Toyota Corolla as among the best in the compact, entry-level segment. It competes against a lower-priced and just as compelling Kia Forte and the far sportier and more interesting Mazda3, as well as its perennial rival, the always-competitive Honda Civic. Against these, the Corolla's greatest strength is its combination of versatility in packaging (5 trims PLUS a hybrid) and extreme reliability expectation. The other competitors can beat the Corolla for drive quality, but none can compete on both reliability and fuel economy.

The completely redone 2020 Toyota Corolla is definitely a new era for the car that propels it into new and more competitive territory. The Corolla, which hitherto has often relied solely on its nameplate as a selling point, has bounced back and become an excellent compact in its own right. With the addition of a hatchback and hybrid variant, the Corolla now leads the way in expectations for the entry-level market.