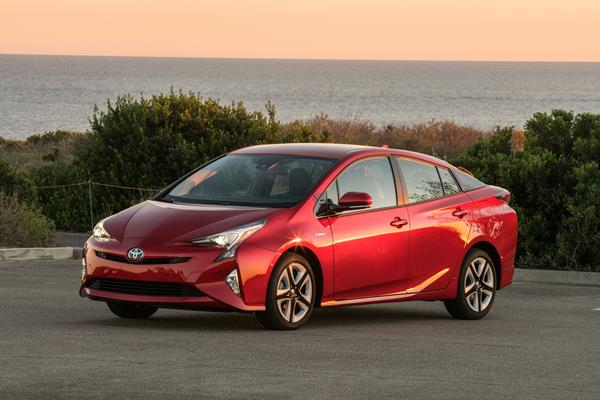 The Toyota Prius was completely redesigned in 2016 to upgrade the body styling and improve the interior experience. Driving dynamics were changed and the car was given some upgrades to raise fuel economy and boost comfort. These have all paid off.

For the 2017 model year, changes are minimal and include making the Safety Sense advanced driver aid and safety features standard across the board for all Prius models. Additionally, the plug-in hybrid (PHEV) model has been reintroduced as the Prime for this new-generation Prius.

The 2017 Toyota Prius is a five-seat (with the exception of the four-seat Prime) hatchback sedan powered by a gasoline-electric hybrid powertrain. The Prius has its oddball points, but is an excellent compact hatchback in its own right, with the added bonus of a best-possible fuel economy. There are seven trim levels for the 2017 Prius, which means there are a lot of options for buyers in terms of accouterments and capability.

The 2017 Toyota Prius is far more likable than the Prius has ever been. 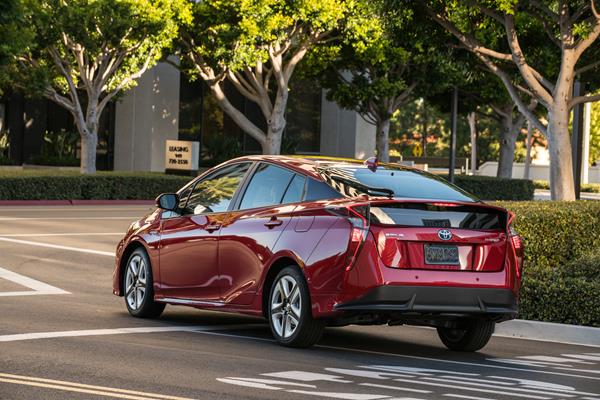 Let's be honest. Even with its new styling, no one will hold their breath in awe as the 2017 Toyota Prius drives by. This car has never been known as a looker and, if anything, has made a statement with its complete disregard for exterior beauty. The word "Prius" is synonymous with "hybrid efficiency," not "breathtaking design." Being frank, most of the positive commentary about the 2017 Prius' exterior have been in comparison to the previous-generation's styling.

The visual begins with the thin, almost nonexistent grille that emphasizes the lack of a big engine under the hood of the 2017 Prius. From there, it's all angles and edges, like a tween at a gymnastics tournament, poking out and thinning in odd and sometimes alien ways.

Knowing that, the new Prius is far more visually engaging than the model ever has been. It sports more angles, more seemingly gratuitous cutouts and more sharp edges than it's ever had before. Those are not necessarily for looks, as the 2017 Prius is actually more aerodynamic than its predecessor. Who knew that sharp edges and seemingly wayward creases could actually improve airflow over the car? 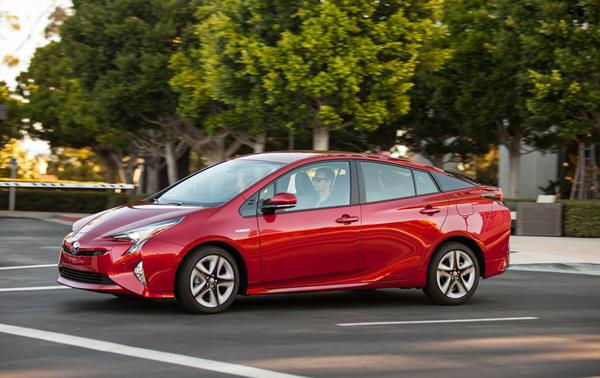 The interior of the 2017 Toyota Prius has been much improved, especially in the upper trims. Some hard plastics are to be found, but nothing about the Prius' interior looks or feels cheap. Materials quality is high and build quality is very good. The design is futuristic and open, with a lot of space created through the swooping dash and wide space between the front seats.

The lower-end models, such as the Prius 2 and 3, have some lack in their seat adjustment options and amenities - especially in climate control capability and infotainment. Upper trims have a much more sophisticated setup and better comfort.

The lack of an instrument cluster may throw some drivers off, if they're not used to the "Prius thing." The Prius forgoes the usual cluster behind the wheel and instead centralizes vehicle information at the top of the dash, front and center. This democratization of the Prius' current status has good and bad sides, depending on how critical your passengers might be and how much sunlight may be glaring through the windscreen. The fact that Toyota did nothing with the space freed up behind the wheel is also a little disappointing. However, upper trims now have a head-up display option that can be helpful.

Seating in the Prius is well done and comfortable up front. Although some adjustments might be missed in the lower trims, nearly all trim levels are comfortable to drive and for the front passenger. The rear seats are also good, though sitting three across (in all but the Prime model) is a stretch unless they're kids. Knee room is another issue in the back, as it is with most compact cars.

Cargo space in the Prius is good, though somewhat limited. The liftback design means that a lot of accessibility is possible, but the dual window and the sloping rear glass means that anything more than groceries is likely to severely obstruct rearward vision when driving. The side mirrors are small and angled, doing little to make up for that. 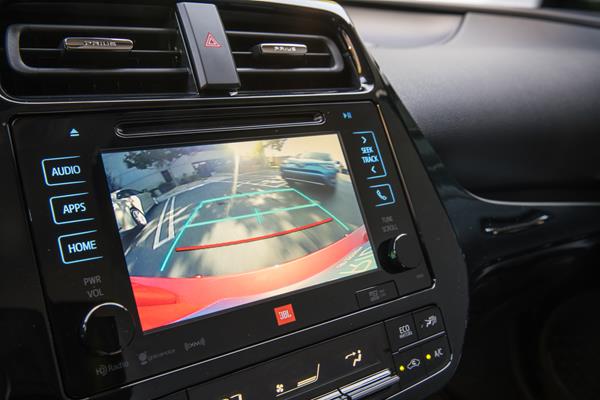 In the lower-end models, the 6.1-inch Toyota Entune system in the 2017 Prius is very easy to use. It lacks many connectivity options and the Bluetooth connection can be poorly executed as well, especially for streaming music from a phone. In the upper trims, this improves to a 7-inch touchscreen that is more robust thanks to the Entune App Suite (free to download). Most of the expected smartphone connectivity is there, with the exception of Apple CarPlay and Android Auto.

In the Prime model, a large tablet-sized interface dominates the center stack. Although this appears highly advanced, it actually makes infotainment more difficult to use and control. The screen is very prone to glare and smudging, and its interface is not much more than a blow-up version of the Entune app with slightly different icons. At night, it is a huge illumination in the cabin as well - prone to being shut off as a safety hazard when it is, ironically, at its most visible. This large tablet-like touchscreen also eliminates most of the useful hard controls inside the Prius for radio and climate control.

There are three renditions of the 2017 Prius, each with differing fuel economy ratings. The standard Prius liftback is EPA-rated at 54 mpg in the city and 50 mpg on the highway. The Eco model receives some tweaks for fuel economy boosting that up it to 58 mpg city and 53 mpg highway. Finally, the plug-in hybrid 2017 Toyota Prius Prime has a 133 mpg-equivalent (MPGe) rating with a 54 mpg hybrid-only rating. The latter number assumes that no plug-in powertrain long-range all-electric driving is taking place. The Prime is capable of running up to 25 miles on battery power only, as opposed to the standard Prius range of about 4 to 5 miles. 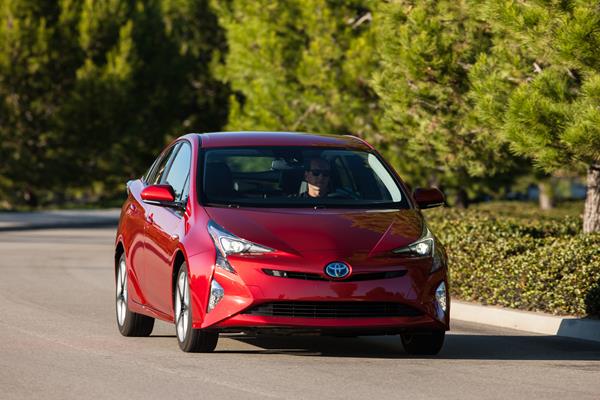 One place that the 2017 Prius does not slack at all is in reliability expectation. The Prius itself has long enjoyed a reputation for dependability and J.D. Power and Associates has given the 2017 model a "Better Than Most" rating in its Vehicle Dependability Study. That and the fact that the only recall is for the parking brake makes us feel that this is a solid little hybrid.

The 2017 Toyota Prius also shines in safety. The Prius has received crash test ratings for 2017 that are very good. The National Highway Traffic Safety Administration (NHTSA) gave the Prius a 5-Star overall rating (out of 5) with four stars for frontal crash results and rollover results, and five stars for side crash results. Similarly, the Insurance Institute for Highway Safety (IIHS) rated the 2017 Prius as a Top Safety Pick+, with best-possible "Good" ratings on all crash tests. 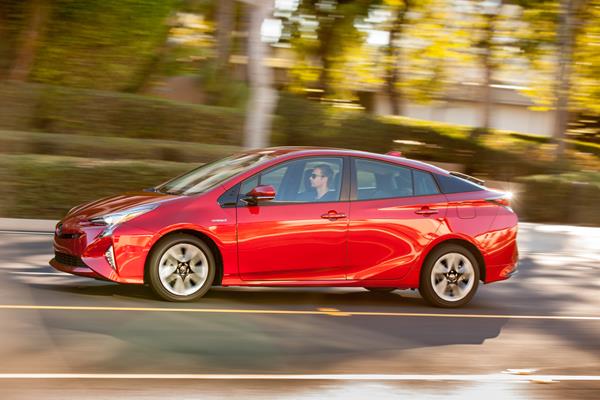 The Prius is not well known for its performance ratings and that non-reputation is well deserved. The 2017 Prius is powered by a 1.8-liter 4-cylinder engine, two electric motors and a continuously variable transmission (CVT). These combine to produce 121 horsepower for the front wheels. Frankly, there's no reason to measure 0 to 60 mph sprint times or acceleration metrics because that's not what the Prius is about.

In normal daily driving and in getting up to speed on the freeway, the Prius will match most entry-level economy cars and compacts in basic capabilities. There won't be checkered flags waving in triumph for the Prius, but it'll get there alongside most of its contemporaries.

That said, there have been some solid improvements for the 2017 Prius over previous generations of the car. One of those is in road noise levels in the cabin and another is in handling characteristics on the road, especially at highway speeds. The former point is thanks to smarter engineering and some added padding at key points in the Prius' frame and bodywork. The latter is thanks to a better steering ratio and tighter chassis.

The 2017 Toyota Prius is not a race car, but it feels more confident in turns at speed and around corners. We drove the Prime model in inclement weather and were impressed that we didn't die in a terrible weather-related wreck. It was remarkably smooth and well-mannered if handled carefully (as any car should be in bad weather). So there is something to be said about the Prius' chassis improvements.

There is definitely a price premium for going with a Prius versus a non-hybrid compact car, but over time the vastly superior fuel economy the Prius offers will handily make up that difference. The base price for the 2017 Prius is good, but most buyers will likely find themselves looking at a Three or Four trim level, which ranges $27k to $30k. These models actually retain value better than base level Prius models, making resale and trade-in a better option down the line.

The Prius is offered in the Two, Two Eco, Three, Three Touring, Four and Four Touring trims and as the plug-in hybrid Prime model. Unless a plug-in hybrid is needed or desired, the Prius Three or Prius Four are likely the best purchase option for most buyers considering a Prius model. 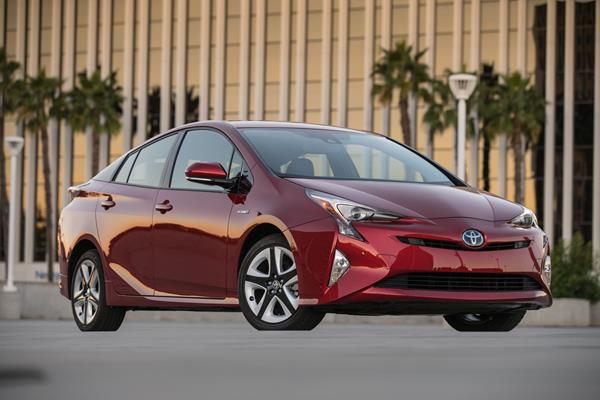 Finding serious competitors for the 2017 Toyota Prius is not easy, but good contenders include the Chevrolet Volt and the Nissan LEAF. The Volt is more stylish and offers a bit more comfort and spirit in its interior and drive. The LEAF is all-electric and has a limited range, but has more versatility than the Prius or Prius Prime. But the Prius is still the leader in hybrids and for good reason. Most of Toyota's hybrid models are excellent and well worth considering. Some of them (such as the Camry Hybrid) may be cross-shopped with the Prius as options.

We do acknowledge that many of the improvements cited for this new-generation Prius are in comparison to the car's previous-gen rather than market competitors, but the Prius largely stands on its own in a class unto itself. For that reason, finding competition to compare as apples to apples is not easy. At best we're looking at mixed fruit in those cross-comparisons.

For 2017, the changes to the Prius are minimal outside of the reintroduction of the PHEV Prime model, renamed from the Prius Plug-in of a couple of years ago. This is a versatile, solid little car that maximizes fuel economy at all times. It's not the most comfortable, most fun to drive or the prettiest car on the road, but the 2017 Prius is definitely the most economical.