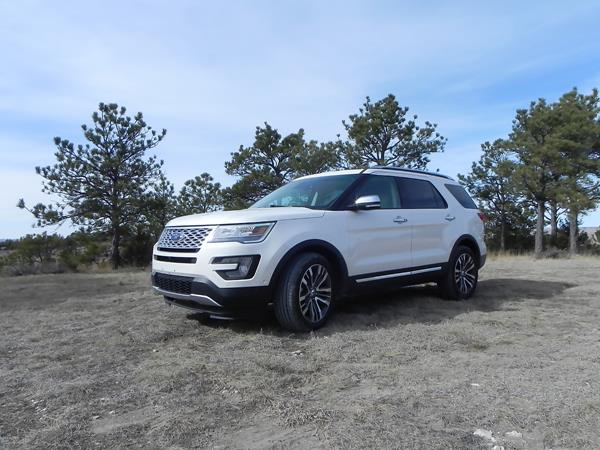 Overview (Final Score: A-)
The Ford Explorer has long been a benchmark and popular choice in the sport utility market. As others began to improve their offerings, though, the competition began to sometimes outshine the Explorer. For the 2016 model year, Ford upped the game with several improvements to the Explorer.

The 2016 Ford Explorer still sets the benchmark for classic looks with a modern flair and fuel-efficient options in a true SUV format. New updates for this model year include some changes to the exterior, upgrades for the infotainment system, and a new trim level and engine option. For 2016, Ford introduced the Explorer Platinum edition that sits at a fitment level equal to any premium-grade offering on the market. With class-leading options like self-parking (both parallel and perpendicular), a bevy of road safety gadgets, and classy looks, this new trim is shadowed only by its breathtaking turbocharged V6.

With three engines to choose from, a choice of either front-wheel or all-wheel drive in two of those engines (AWD is standard in the Sport and new Platinum trims), and the ability to tow nearly on par with a half-ton pickup, the 2016 Explorer is an excellent contender in the contentious full-sized SUV market. Add in its upscale interior and for many buyers, this SUV is the winner.


What We Loved About the 2016 Ford Explorer


What We Didn't Love About the 2016 Ford Explorer 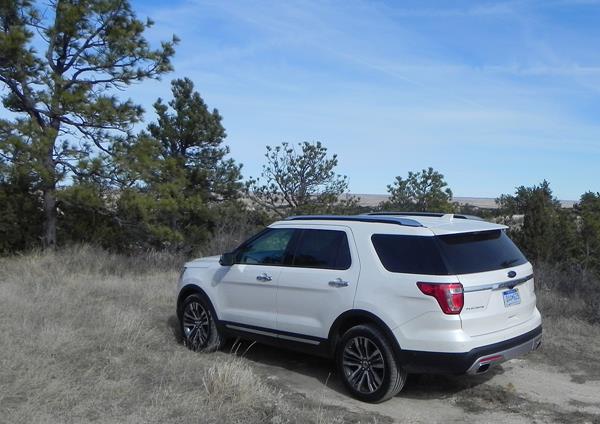 Exterior View (9/10 relative to market)
The 2016 Ford Explorer is often seen as the benchmark for sport utility design and has been refreshed for 2016 with new styling updates. Known for its upscale appeal, the Explorer's exterior changes this year are subtle, but meaningful. The grille is very different, having a less pronounced look and a more appealing persona with its honeycombed design. The headlights are also very different, getting a bit thinner and upgrading to LED for a more modern feel.

The floating rear pillar, curved glass, and door indents between fender bulges are all still there from the previous Explorer. Some might note a few small design changes in the trim design and larger side mirror blinker lights, if they're looking, but for the most part, the popular design of the Explorer remains intact for the 2016 model year. It's a good look that draws from several of Ford's previous excursions into SUVs globally, most notably with Land Rover.

All together, the 2016 Ford Explorer has a sleek, stylish, but powerful look that sets the stage for the segment. 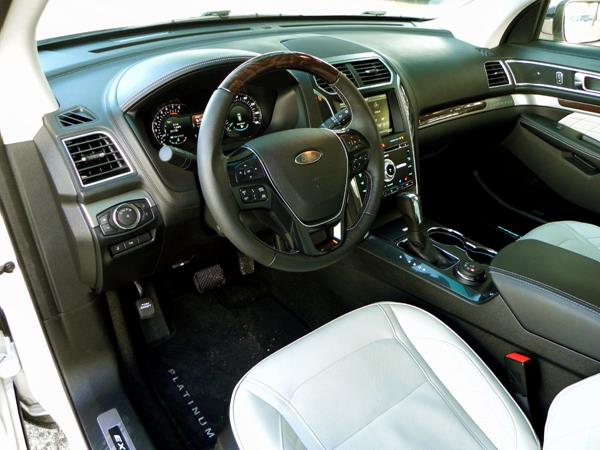 Interior Comfort, Quality, Ergonomics (9/10)
The interior of the 2016 Explorer is plush and well-designed, but at its heart, this big SUV is still a truck. That means a high ride height, some limits to visibility, and some decidedly non-car-like ergonomics. This should be expected and although there are some SUVs and plenty of crossovers with better maneuverability, few can claim the kind of interior comfort and accoutrements that the Explorer displays.

Attractive and well-considered materials are found throughout and increase in upscale appeal as the trim levels improve. The front and second-row seating are very accommodating to people of all sizes and three can sit across in the second row without discomfort. The third row is mostly for children, of course, but is larger than might be expected when the second row captain's chairs are opted for; so that even teenagers will not likely complain about being back there. Throughout the Ford Explorer there are cubbies, plugs, and other details to keep daily use a high priority. New for 2016 are added USB ports in the cabin.

Cargo in the big 2016 Ford Explorer is good, with deep wells being revealed when the third row is in use, allowing for more storage in the back. Enough that most can probably get multiple checked bags back there without much fuss. With both rear rows folded, cargo is flat and relatively wide, opening up to 81.7 cubic feet. Others in the segment have more, but it's not likely many shoppers will notice the difference.

In all, the Explorer's interior is more upscale than many competitors might offer at the same price point and is comfortable for everyday use. 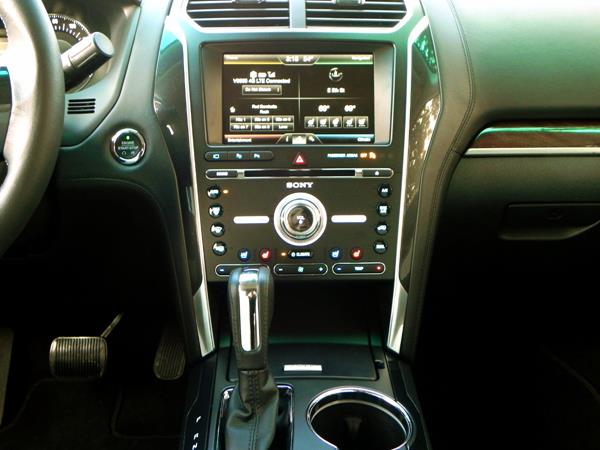 Technology (7/10)
Technology in the 2016 Explorer centers on the MyFord Touch system, which is an upgrade option on most trim levels and standard at the upper levels. This adds a high-resolution touchscreen as well as extra readouts for the driver in the gauge cluster. This system is a big upgrade from the standard MyFord system, which offers very little functionality and even less user friendliness. The MyFord Touch system's greatest asset is its voice recognition controls and its deliberate nature.

Standard equipment with the MyFord Touch system is an SD card reader and the latest version of Sync. The eight-inch touchscreen is clear, easy to read in most lighting, and the addition of physical climate control buttons greatly boosts daily usability for the Explorer's interior and tech offering.


Fuel Economy (8/10)
The Explorer's fuel economy is good for the segment. There are three engine choices and all three are offered in both front-wheel and all-wheel drive drivetrain configurations.

Two Explorer trims offer a turbocharged V6 engine option in an AWD drivetrain only. This rates 18 mpg combined per the EPA, with 16 mpg in the city and 22 mpg on the highway. 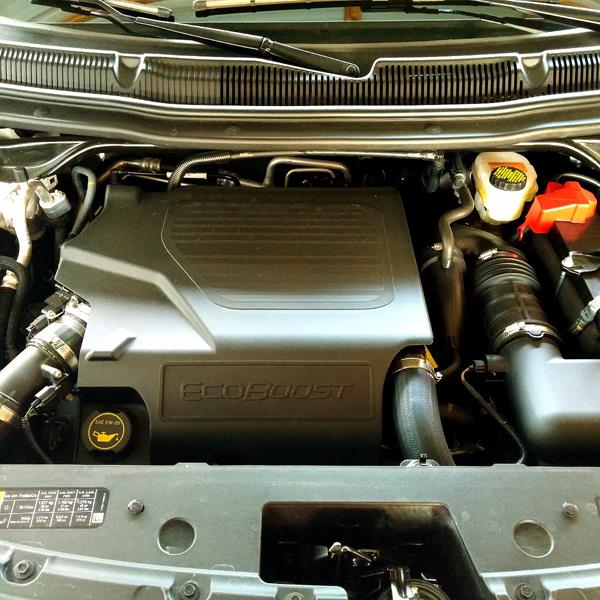 Predicted Reliability, Initial Quality Ratings (7/10)
The 2016 Explorer is not all-new, but it's got several new components and a new trim level. J.D. Power and Associates is rating the 2016 Explorer at "About Average" in its Vehicle Dependability Study." The presence of two somewhat serious safety recalls from the National Highway Traffic Safety Administration is another concern. Those were for the parking brake and mounting for the fuel tank.


Safety (8/10)
Crash test results for the 2016 Ford Explorer have been a bit mixed. The SUV has earned an overall 5-Star Rating from the National Highway Traffic Safety Administration (NHTSA), earning five stars on each test except rollover, for which it received four (out of five). The Insurance Institute for Highway Safety, however, gave the Explorer a second-worst "Marginal" score for the small overlap front test and a highest rating of "Good" for three other tests, including rollover ("roof strength"). The Explorer was not rated for rear crash testing by the IIHS.

These results combine to prompt us to give the 2016 Explorer a good, but not exemplary score for safety. The optional safety equipment offered, including adaptive cruise, lane departure warning, forward collision warning and brake priming, and more. Our Platinum test vehicle had all of these (and more) and did well in traffic for it. 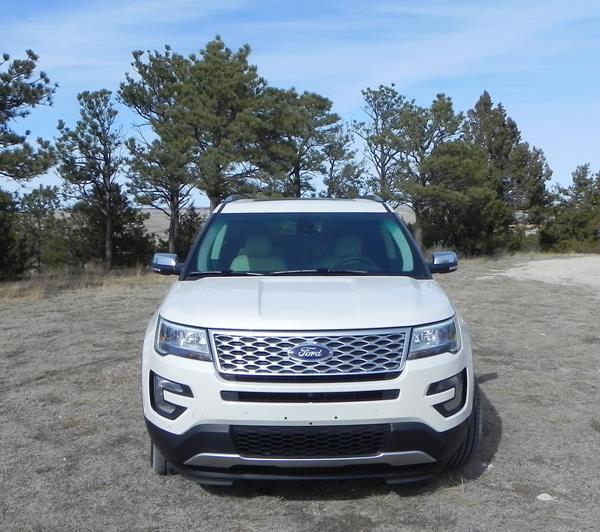 Performance (9/10)
Several of the engines offered in the 2016 Ford Explorer will be familiar to F-150 fans. There are three options, two V6s and a four-cylinder. All come standard with automatic transmissions.

The base engine is a 3.5-liter V6 that outputs 290 horsepower and 255 pound-feet of torque. Front-wheel drive is standard, all-wheel drive is optional. In the AWD model, standard equipment includes Ford's four-mode terrain system (called the Terrain Management System) which includes hill-descent control and hill-start assist.

Most of the Explorer's trim levels can be upgraded from the base engine to a turbocharged four-cylinder displacing 2.3 liters. This little engine churns out 270 horses and 300 lb-ft of torque. Again, FWD is standard and AWD is optional. An optional tow package allows this version of the Explorer to pull up to 3,000 pounds (as can the base V6).

In the Sport and new Platinum models, a 3.5-liter turbocharged V6 is standard equipment, offering 365 hp and 350 lb-ft of torque. AWD is standard with this engine. With a tow pacakge, this engine is capable of pulling up to 5,000 pounds behind the Explorer. It's also decidedly quick, with our test model (a Platinum edition) doing 0-60 miles per hour in under 7 seconds.

On the road, all three engines are good choices for the 2016 Explorer, but most will want to opt for the turbocharged options over the base engine for their faster power delivery and higher capability. The fuel economy improvement with the turbo four is worth the upgrade for those who put a lot of highway miles on their truck.


Pricing and Value (8/10)
For those looking for a fully-capable, family-ready SUV rather than a crossover, the 2016 Ford Explorer is a good value choice. The base price begins around $31,000 and goes up from there, with our Platinum test model ringing in at over $53,000. The amount of technology, accoutrement, and premium inclusions given for these prices, though, is good for the segment. Not many other SUVs of this size can offer the kind of upscale interior appeal and classic exterior styling that the Explorer can.

For most buyers, the best pricing and value will likely be found in the mid-level Limited trim with its impressive array of standard equipment and its access to plentiful upgrade options. At this level, the Explorer can be very well-equipped for around $43,000. 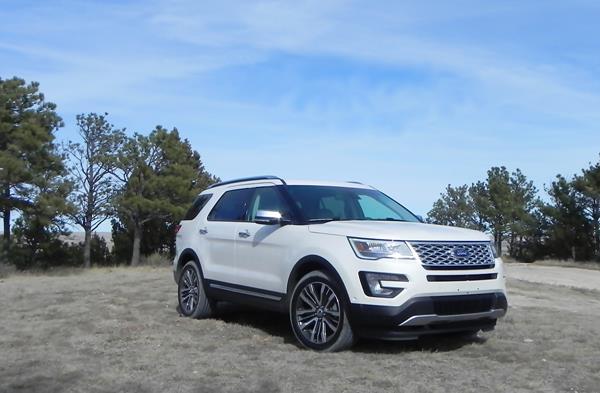 Total Score and Competitive Comparison (65/80, 81%)
Most of the manufacturers one would expect to be competing in the full-sized sport utility segment are there. Chief competitors to the 2016 Explorer are the Chevrolet Traverse and its GMC Acadia sibling as well as the Jeep Grand Cherokee. By comparison, these are all solid offerings. Also competitive with the Explorer are excellent crossovers such as the Toyota Highlander and the Honda Pilot.

All of these are strong contenders in the full-sized crossover-SUV field. The Ford Explorer is a good choice for those who need some truck-like capability to go with their family hauling. Its value proposition is also good compared to the General Motors twins and the Jeep. For serious offroad capability, the Grand Cherokee reigns and for upper-level posh without luxury costs, the GMC is the way to go. For supreme family-friendliness, the Highlander is tops.

The choice will ultimately come down to what the buyer wants. For those looking for a good combination of people hauling, an upscale interior experience, and value for the dollar, the 2016 Explorer fits very well.