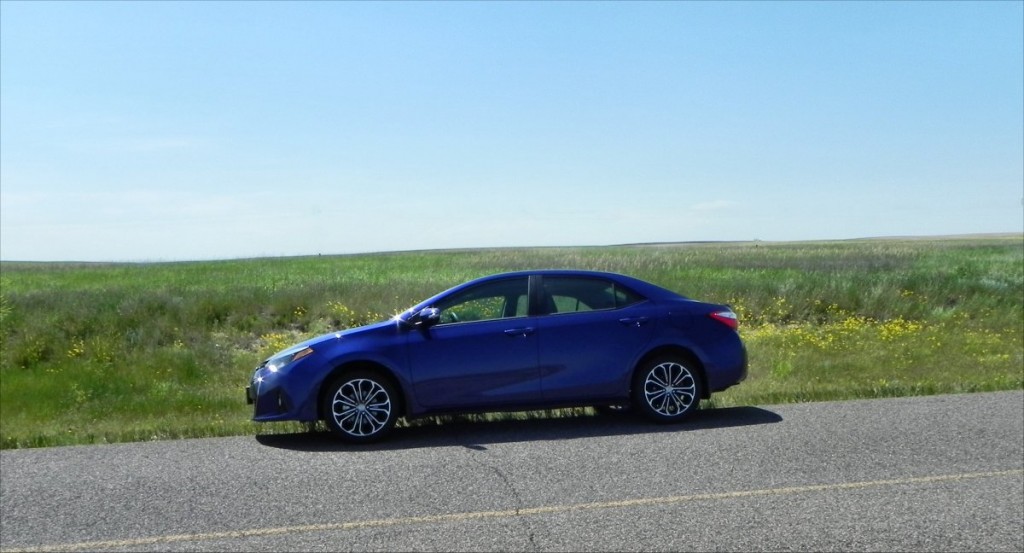 Overview (Final Score: A-)
The 2015 Toyota Corolla is the current rendition of a long-lived compact car model that was one of the first vehicle models from the Japanese company upon its entry into North America. This new generation was introduced last year and continues for 2015 with a strong value proposition.

The Corolla has long been known for its very accessible trunk, smart interior, and strong value-oriented packaging. That continues now, with the 2015 Corolla featuring all of these things along with a roomy interior and upper-tier infotainment option.

The 2015 Corolla may not be the looker some of its competitors are and it may not have the fun driving dynamics of sportier options, but it delivers on everything most compact car buyers want: versatility, economy, and value. This is not to say that we do not have some concerns about the Corolla, but it's still a solid choice in the compact arena.


What We Loved About the 2015 Toyota Corolla


What We Didn't Love About the 2015 Toyota Corolla 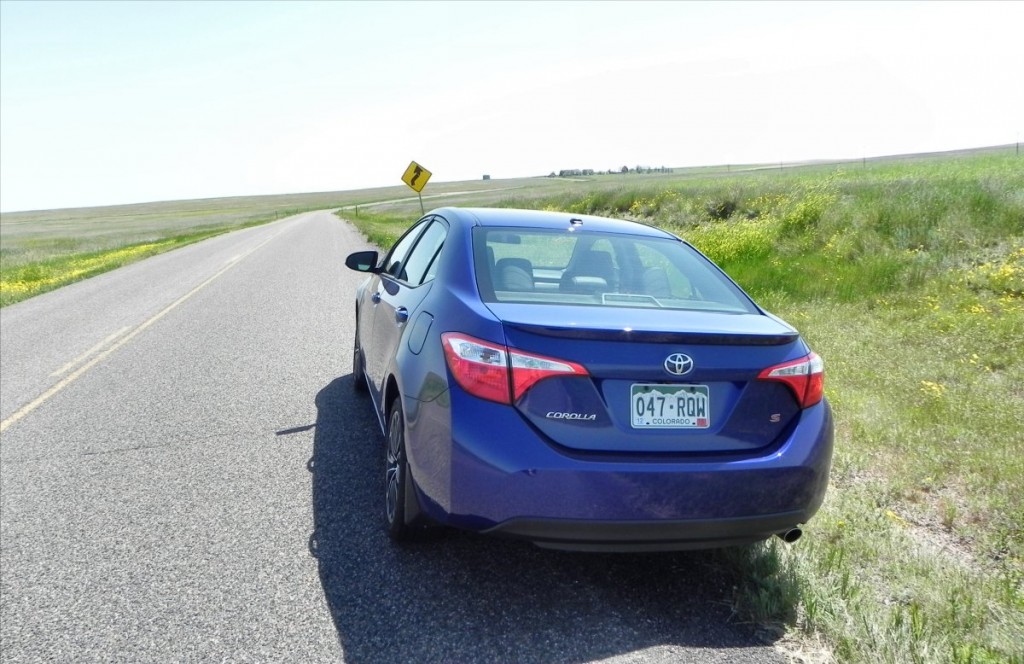 Exterior View (8/10 relative to market)
The Corolla was redesigned for the 2014 model year and that design carries forward to the 2015 Corolla. It's a bold, more stylish look for the Corolla, relative to previous generations of the car. Compared to the rest of the compact sedan segment, the new Corolla is contemporary rather than stand-out. This is on par with Toyota's overall approach to the sedan market as a whole.

We like the more aggressive front fascia, slitted grille, and wide, thin headlights. The hood has little adornment, but flows well into the sharply raked windscreen. The fenders bulge without much flair and the sheet metal along the sides is plain, but well-curved. The roofline is coupe-like and terminates in a fastback-style clipped trunk. The rear has bulging lights for airflow, but is dominated by the sharp light extensions into the deck lid and the curved bulge for the lid's end point where it meets the protruding bumper.

It's a simple, but sharp look overall and gives the 2015 Toyota Corolla a sense of appeal without being polarizing or over-stated. This matches the overall theme for the Corolla as a model.

We do note that there are beautiful paint and wheel options for those who want more bling to their ride. 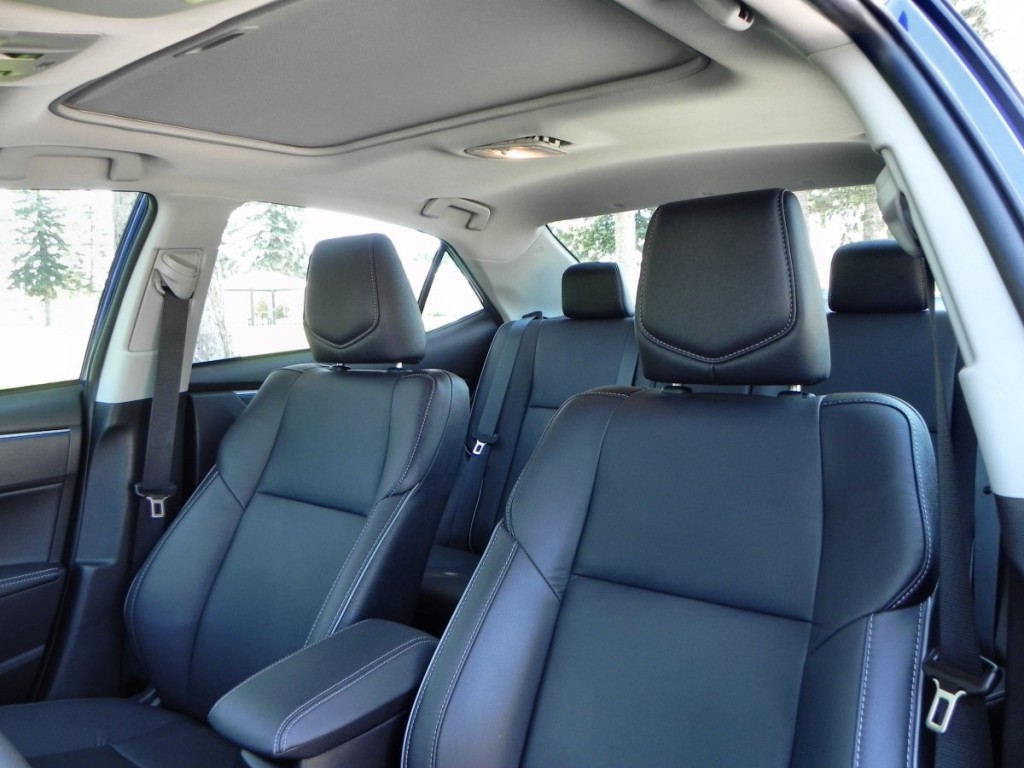 Interior Comfort, Quality, Ergonomics (8/10)
As with others in this segment, the Corolla is a budget car, but retains a relatively upscale cabin compared to some. The real shining point of the 2015 Corolla's interior, though, is not its aesthetic design so much as it is versatility. Specifically in trunk space, which stands at a cavernous 13 cubic feet with a wide opening and lower front lip. This makes it both more accessible and more usable, especially for bulkier items such as tall boxes or fat suitcases.

The rest of the interior is good as well, though not the best we've seen from this vehicle category. Seating is comfortable, nicely bolstered in the upper trims, and adjustable enough for most people. The front seats have plenty of legroom and headroom for even a tall driver or front passenger and adequate shoulder room for most. Some ergonomics will be difficult for taller people, but not deal-breaking. Of note there is the lack of length extension for the tilt-telescoping steering wheel.

The rear seat is not as accommodating to larger folks, but is a good fit for average-sized adults and children. It's comfortable for most trips, but long stints may become tiresome on that bench. Still, it is better than most you'll encounter in the compact class. The rear seats fold down, of course, to open up the trunk for cargo pass-through when needed.

We also noted that the 2015 Corolla is quiet on the road compared to most in the compact car segment, but much of this comes from the low roof and aerodynamic build of the car, which impedes on headroom for taller passengers. 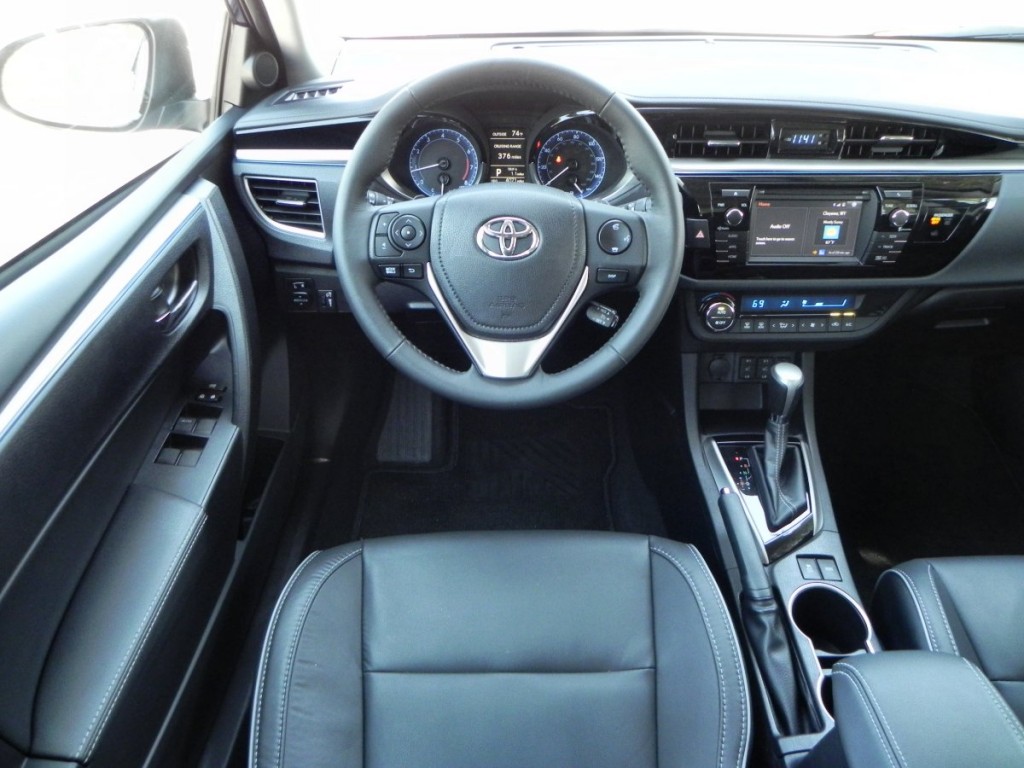 Technology (8/10)
Technology options in the 2015 Corolla are in the upper level trims and comes through a 6.1-inch touchscreen. That screen is a bit small and the backup camera that usually comes with it is low-resolution, limiting its usefulness. It does, however, have the Entune App Suite (optional on most packages) that allows a lot of smartphone integration. Provided the user installs an app and registers for an account with Toyota, of course.

The initial setup for Entune can be a hassle, but is worth the trouble once done. The car's infotainment comes alive with options and lets you use Bing, Facebook, Yelp, Pandora, and even stream real-time traffic to the navigation. Some of these only work when the car is parked, of course, for safety reasons. The learning curve is reasonable as well.

The downsides to Entune, aside from the app installation and setup requirements, are its sometimes slow response and occasional hiccups with the home screen resetting rather than completing an action. This is common to our experience with other Toyota vehicles as well.


Fuel Economy (9/10)
The 2015 Toyota Corolla returns good fuel economy in all of its trim and powertrain choices. The base model is EPA rated at 31 mpg combined (27 in the city, 36 on the highway) with its automatic transmission and gets the same 31 mpg combined with its manual shift option.

In the real world, our test model was a 2015 Toyota Corolla S Premium onto which we put 169 miles of combined driving for an average of 30.8 mpg in all. 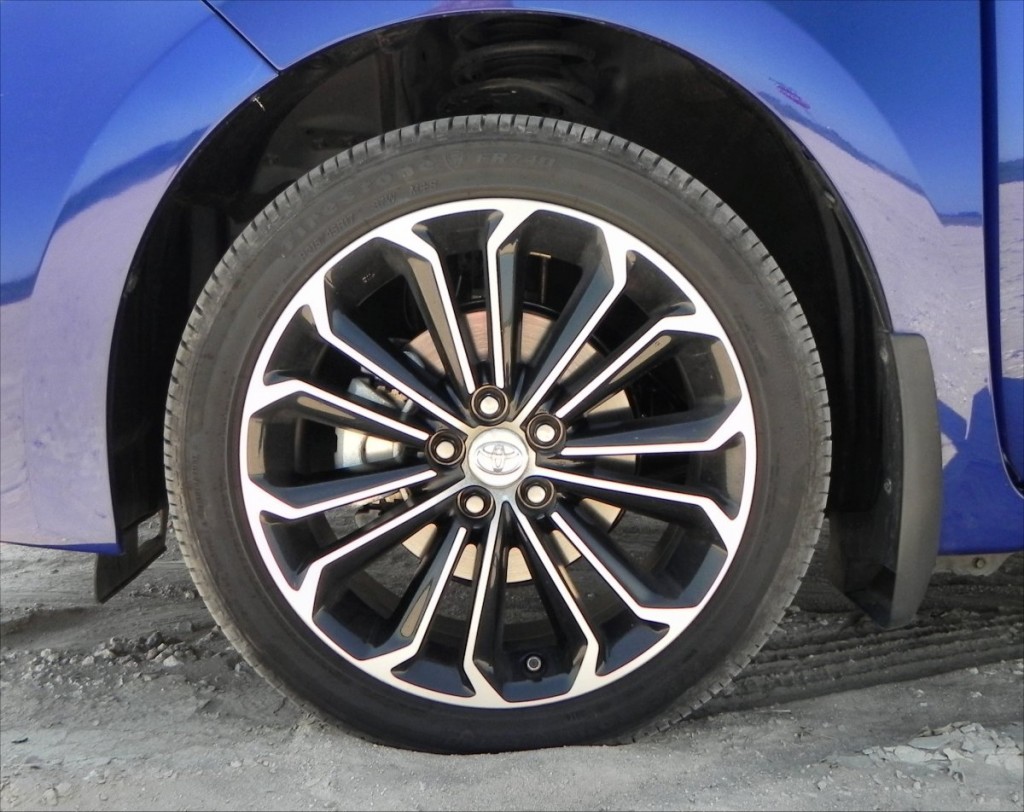 Predicted Reliability, Initial Quality Ratings (10/10)
The 2015 Corolla is expected to perform well in the category for reliability. Its initial quality ratings from J.D. Power and Associates are "Among the Best." Toyota as a manufacturer has a reputation for quality and reliability and the Corolla is anticipated to carry that forward, as it has in the past.

The Corolla is one of the best-selling cars in the compact class, so it has a long track record to draw from. This generation is now in its second model year and continues to rank high.


Safety (8/10)
The 2015 Corolla receives good safety marks for the segment with crash tests giving it scores slightly above the average. The National Highway Traffic Safety Administration (NHTSA) gave the Corolla an overall best score of 5-Stars for its crash testing. It scored well on both frontal and side-impact tests.

The Insurance Institute for Highway Safety returns a somewhat more mixed bag of results, with an overall "Good" rating on most tests. Exceptions include the small-overlap frontal-offset test, which returned a second-lowest "Marginal" result. Most compact cars struggle with this crash test, so the Corolla is not alone.

There are a few things to note about the 2015 Corolla and its safety. Overall, it is about average in its testing from the NHTSA and IIHS and includes a rearview camera in all but the base model trim. Outdated drum brakes, however, are still found on most of the 2015 Corolla's models with only the S models in Plus and Premium having discs at the rear. This significantly impacts the sedan's stopping power and means that in 60-0 mph brake testing, it is often one of the worst in the category. This point caused us to drop its score as a result. 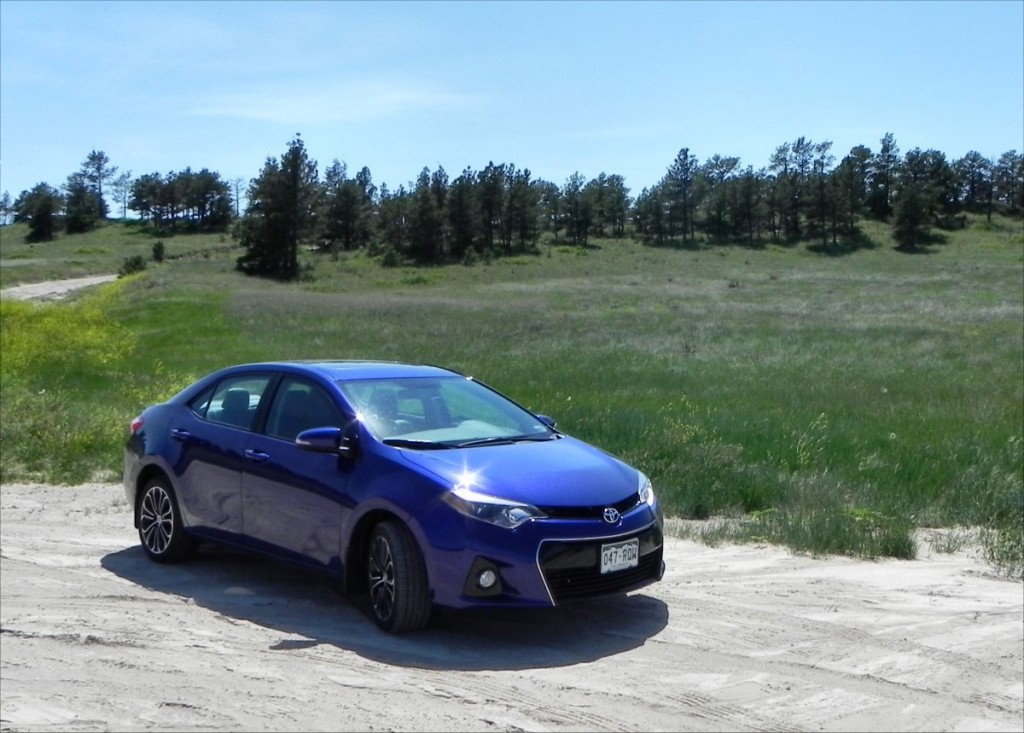 The engine powering the little Corolla is a 1.8-liter inline four-cylinder that produces 132 horsepower and 128 pound-feet of torque excepting in the LE Eco model. That model uses the same engine tweaked to 140 hp and 126 lb-ft. The engine's power output is adequate for the car, but not noteworthy for speed or fun. With the six-speed manual transmission, it's more enjoyable to drive thanks to the added control this gives, but it's far more efficient with the CVT installed.

That CVT, however, is a big concern to us in this new Corolla. It's loud, it often struggles at highway speeds, and it has almost no feel to it in terms of return for the driver. Often described by journalists as a "dead fish," we found the loud, whining CVT to be a serious downside in this new Corolla. 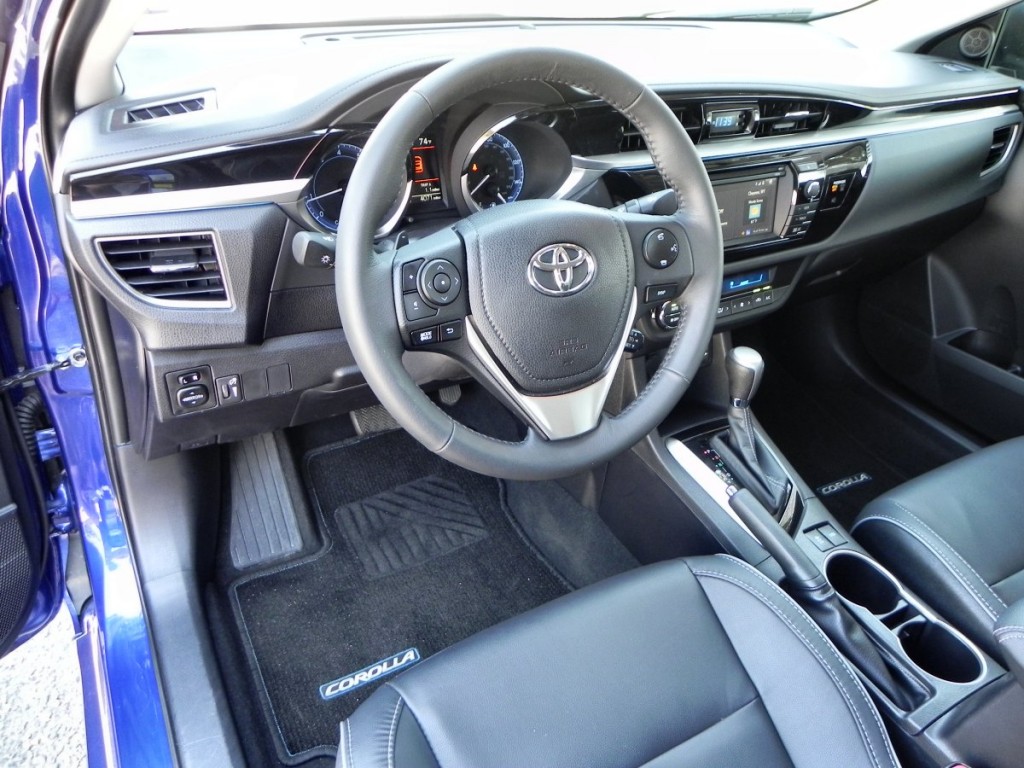 Pricing and Value (9/10)
The 2015 Toyota Corolla is a good value for the price. Featuring high expected quality and reliability, good fuel economy, and a relatively upscale appearance and cabin, it is priced roughly equivalent to the competition. Its base manufacturer's suggested retail (MSRP) is competitive, but the car is much more value-oriented in its mid-level trims such as the LE Plus and S, which start just under $20,000.

Traditionally, the Corolla has enjoyed a relatively strong resale value in the compact market, overshadowed only by Subaru and Honda models. We expect this to continue, contributing to the long-term value proposition for this sedan.


Total Score and Competitive Comparison (67/80, 84%)
The 2015 Corolla ranks well among competitors in the compact sedan category with an overall "A-" rating. The competition in this segment is hot, however, with a lot of great choices to consider. One of our top choices is the 2015 Mazda Mazda3 with its sporty appeal and top-notch "Ward's Best" interior. The 2015 Hyundai Elantra is another solid choice with great style as is the 2015 Ford Focus. The surprising 2015 Volkswagen Jetta is a close contender to the Corolla in terms of total packaging and the 2015 Honda Civic is one of the most popular choices in the segment for the same reasons.

In all, we like the Corolla and rank it among the best in the compact segment, but the others mentioned are also solid choices here. For the consumer, the purchase decision is likely going to revolve around current incentives for the car, style, and cost of ownership. The lack of a hatchback option may also be a deciding point for some.

In the end, the value proposition and reliability expectation are the strongest selling points the 2015 Corolla has and those may be enough for many compact car buyers.