Overview (Final Score: A-)
The 2015 Toyota Avalon is a full-sized sedan positioned as the flagship of the Toyota lineup of cars. Small by comparison to other full-sized sedans on the market, the 2015 Avalon nevertheless delivers consistent value, fuel economy, and holds a contemporary appeal among buyers.

The Avalon has seen little change since this generation's introduction a few years ago and is slated for redesign soon. Though the current 2015 Avalon may be aging, it is not falling behind. The Avalon in both its gasoline and hybrid-electric formats delivers some of the best fuel economy numbers in the segment to go with its spacious interior and confident driving characteristics. 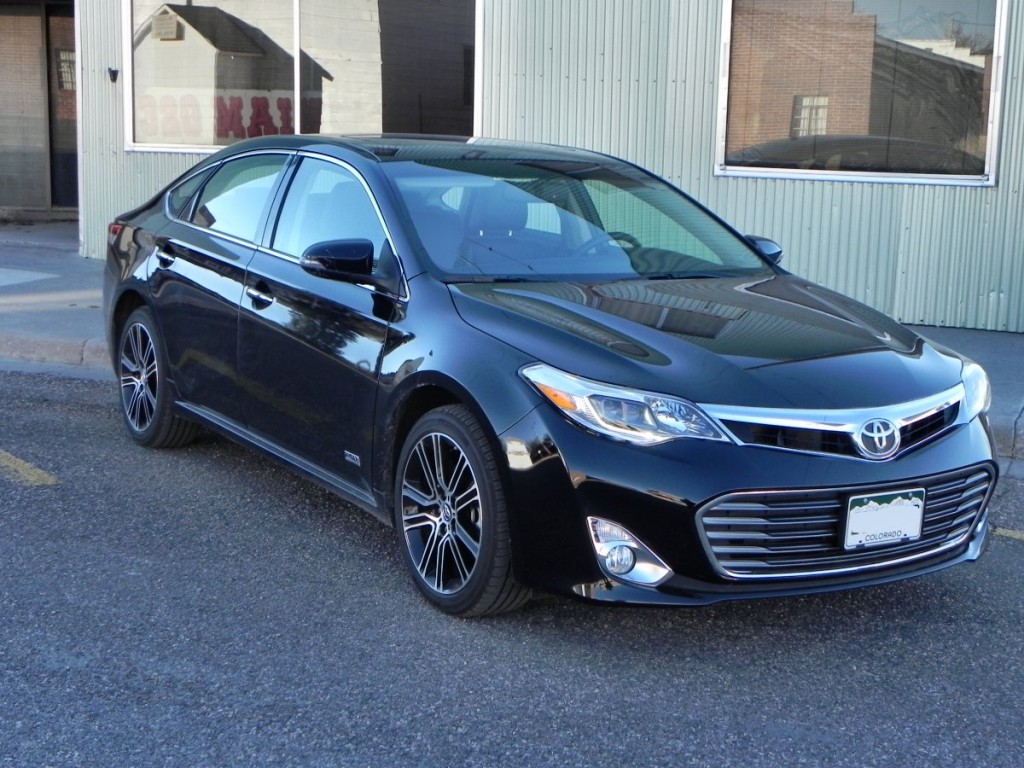 What We Loved About the 2015 Toyota Avalon


What We Didn't Love About the 2015 Toyota Avalon 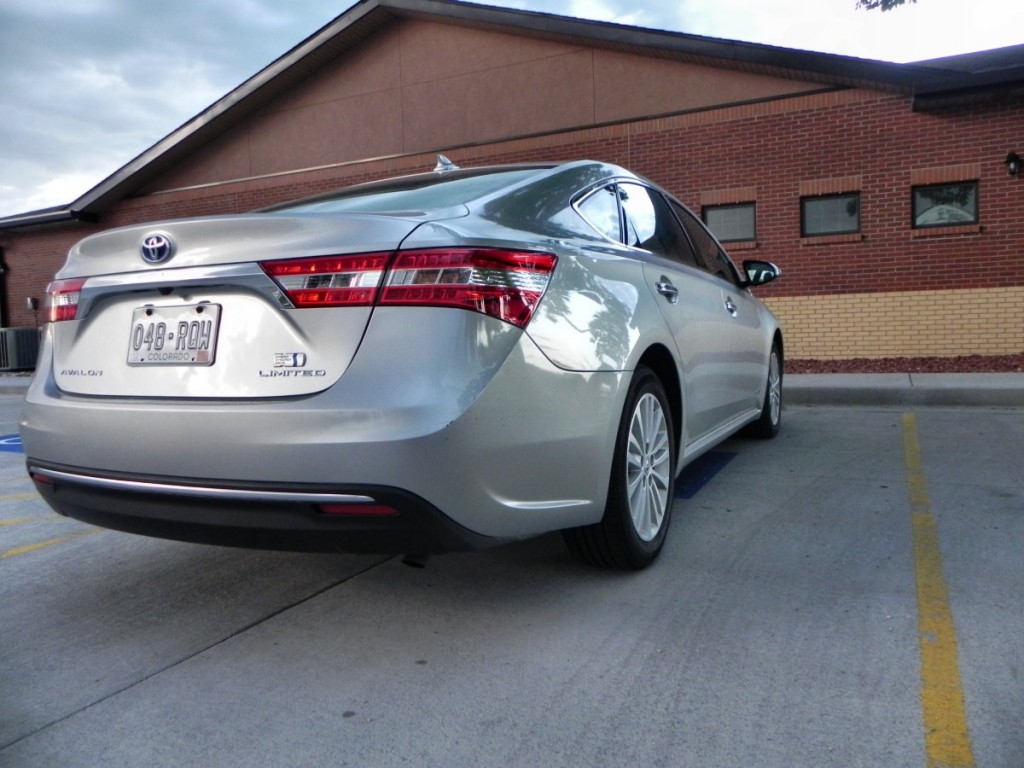 Exterior View (7/10 relative to market)
The Toyota Avalon features a sleek, modern exterior with a fastback-style rear end and short hood line which together emphasize the sporty roof taper. This is accentuated by a long body line running from the front fender to the rear taillamps and a light cut along the bottom of the body panels between the wheels. The front fascia is of the signature Toyota style with a wide lower intake and thin grille above, centered by the Toyota badge. The headlights bulge from underneath strong fenders accented by a stepped slope to the hood.

The 2015 Avalon is a stylish car with a contemporary, honest design. The Avalon does not turn heads, but this flagship Toyota doesn't blend into the crowd either. It's a bold, but not excessive appeal that brings the Avalon to the eye. Knowing that, the 2015 Avalon's look is becoming a bit dated as the Toyota lineup begins to move forward with more aggressive design language. 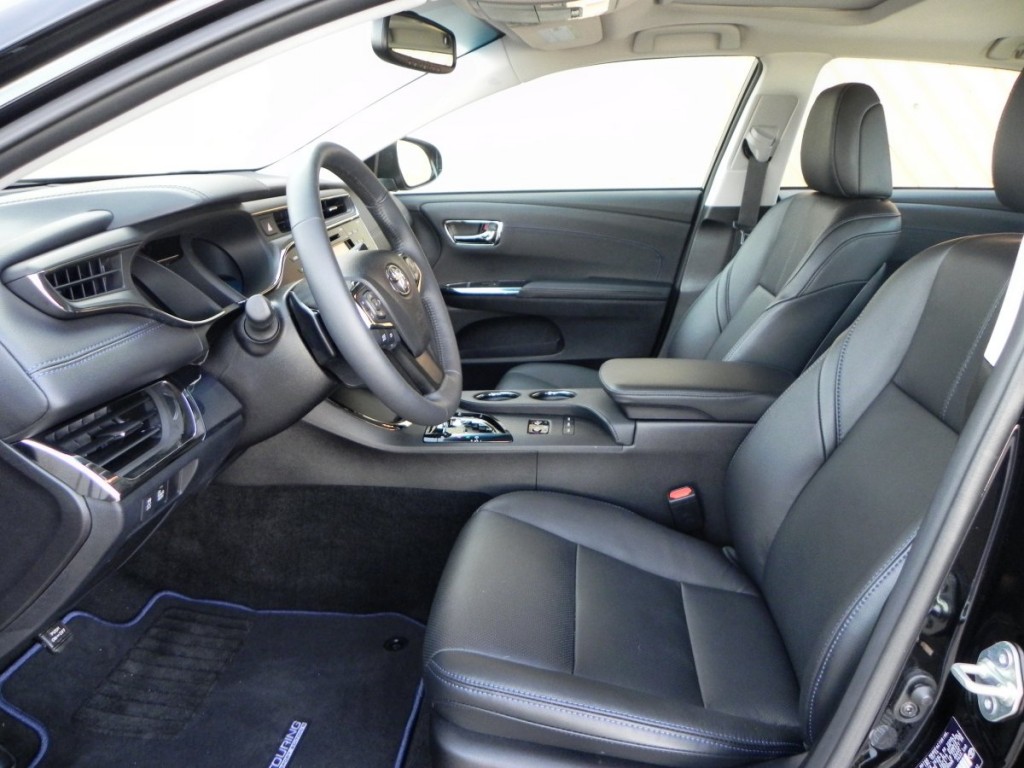 Interior Comfort, Quality, Ergonomics (8/10)
The Avalon's interior is roomy, comfortable, and well-appointed. Quality materials are found at all points and storage and ergonomics are well-considered. The front seats are well-made and composed, with plenty of bolstering and support. Seating in the rear is also generous, with plenty of leg and shoulder room. Headroom suffers a bit from the coupe-like roof slope, but six footers will find it accommodating nonetheless.

Thoughtful touches like the center console's power cord pass-through slots to allow gadgets to be both plugged in and accessible are found within the cabin.

Trunk space in the 2015 Avalon is good at 16 cubic feet and is well-designed for easy access. The Hybrid model reduces the trunk to 14 cubes to give space for batteries, but is still of a good size when compared to rivals.


Technology (8/10)
The Toyota Entune infotainment suite is standard in the Avalon from the base level on up. Additional app integration and smartphone connectivity, along with a larger screen, are to be had on upper trims. The updated Entune interface is easier to use and its home screen can be customized. Those familiar with swiping gestures from smartphones will like the new interface's integration of that as well as the adaptive voice recognition system that learns as you use it, improving its function immensely.

Another addition is the option for Qi wireless charging, which is convenient, though not quick. It requires that some hardware be added to your phone, but this is easy to do and may be worth it for the convenience. Another upgrade option is cache radio for broadcast or satellite radio, giving up to 20 minutes of rewind so you don't miss the beginnings of songs or game scores. 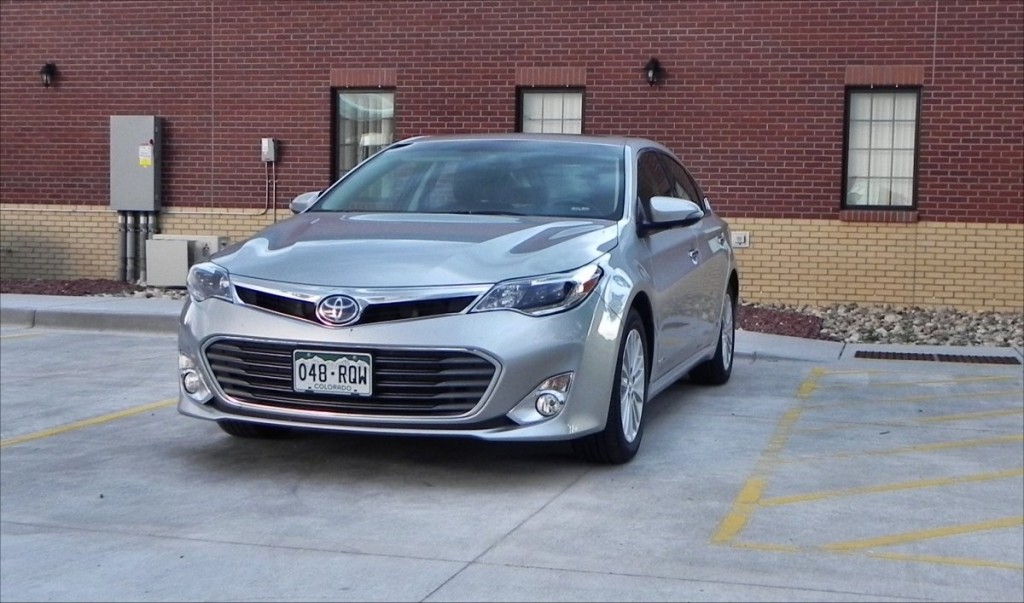 The 2015 Avalon Hybrid offers a segment-leading 40 mpg combined (40 city, 39 highway). Our test of this model returned 38 mpg combined. We note that the hybrid receives better city MPG and that our testing was heavy on highway usage.


Predicted Reliability, Initial Quality Ratings (10/10)
Toyota as a brand has a strong reputation for reliability and cost-effectiveness. The 2015 Avalon is a well-proven vehicle in its current generation and achieves good reliability scores. The J.D. Power and Associates Vehicle Dependability Study gives it a rating of 4.5 Power Circles, putting it among the best.

A three-year/36,000-mile warranty comes standard with the Avalon along with a five-year/60,000-mile powertrain warranty. No safety recalls have been recorded for the 2015 Avalon. 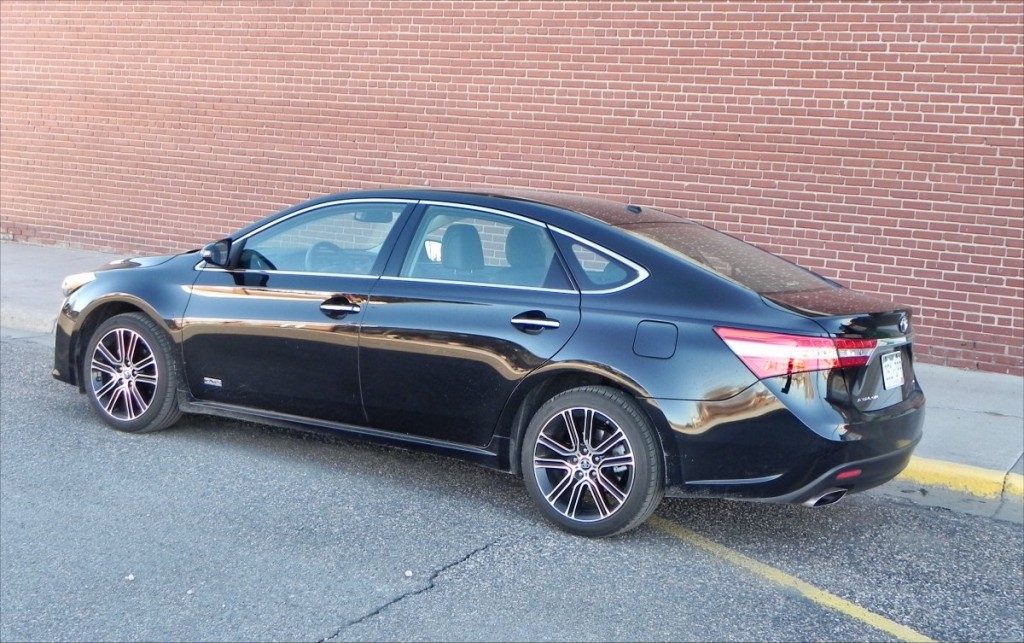 Safety (10/10)
The 2015 Toyota Avalon received near perfect scores from both the National Highway Traffic Safety Administration (NHTSA) and the Insurance Institute for Highway Safety in crash testing. A full 5-star rating from the NHTSA included top ratings for side-impact protection. A best-available "Good" rating from the IIHS was given in all crash testing.

Several standard safety features are included with the 2015 Avalon with the upper trims including additions like Toyota's Safety Connect service with automatic collision alert. A frontal pre-collision warning system is also available as part of an optional Technology package upgrade.


Performance (8/10)
The 2015 Avalon comes standard with a 3.5-liter V6 engine that produces 268 horsepower and 248 pound-feet of torque. This runs through a six-speed automatic transmission in front-wheel drive.

The V6 in the Avalon is a solid performer with a good return of peppiness and confidence. It is quiet and well-mannered in most situations and cruises well at freeway speeds. The Avalon is maneuverable and smart around town, but becomes a bit soft on the highway at speed. The V6-powered Avalon is easy to drive, however, and will appeal to most people.

The Hybrid model is powered by a 2.5-liter four-cylinder engine and electric motor running through a continuously variable transmission (CVT). A second electric motor acts as a starter/generator and the entire system, called Hybrid Synergy Drive, powers the car's front wheels with 200 horsepower combined.

This model is much sportier than its V6 counterpart, thanks to the fast torque delivery from the electric motor. It accelerates well and feels well-balanced on the road, with a slightly stiffer chassis to accommodate the battery pack's weight. In all, the Hybrid model is generally more appealing to drive than is the V6 and the high fuel economy returns only add to this. 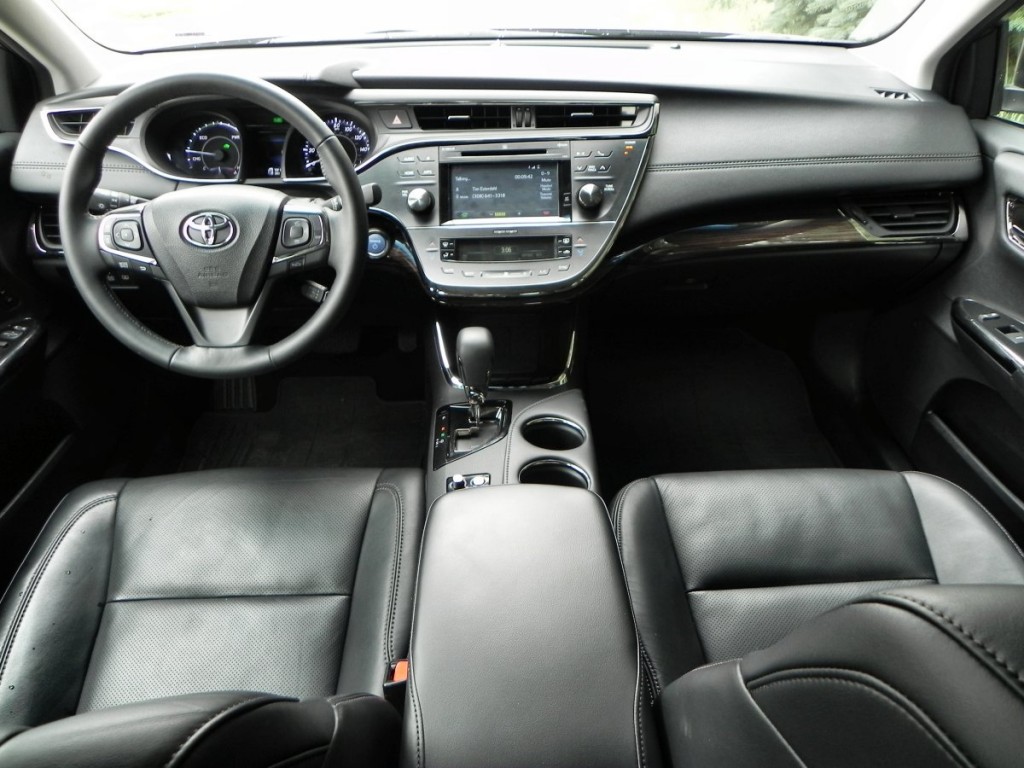 Pricing and Value (8/10)
The Toyota Avalon is priced slightly higher, at the base level, than some competitors, but is still within expected ranges for the class. At just over $32,000, plus delivery, the base-level Avalon does provide good value despite its higher price, thanks to its excellent packaging and high expected dependability and fuel economy. The top-level Avalon tops out at about $40,000 and is very well-equipped, though some rivals do include features the Avalon lacks such as automatic safety braking.

The Avalon Hybrid offers a good mix of economy and features for the price tag, with its base model entering in at about $36,500 and the highest trim working towards $42,000. The hybrid premium for the 2015 Avalon is roughly $2,000 but this model traditionally holds a higher resale value and the much higher fuel economy is a smart payoff for many buyers.


Total Score and Competitive Comparison (68/80, 85%)
The Avalon, of course, has many competitors in the full-sized sedan segment, but only one hybrid competitor, the Buick LaCross, which falls short in fuel economy. For the V6 Avalon, however, strong contention comes from the Chevrolet Impala, the newly-updated Chrysler 300, and the refined Kia Cadenza. None, though, can touch the Avalon's reputation for reliability.

We like the 2015 Toyota Avalon's overall package of comfort, contemporary design, and economy. The Avalon is the most well-rounded sedan in the full-sized segment and brings a long-term value proposition few of its competitors can match.