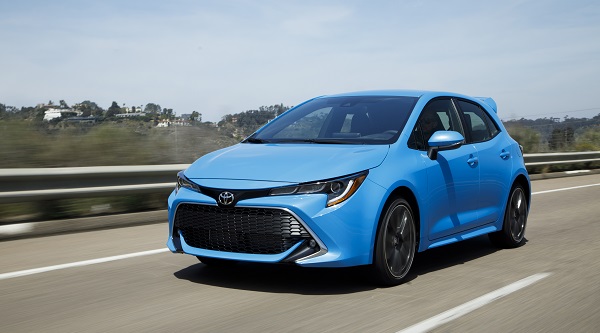 What We Love About the 2019 Toyota Corolla Hatchback:


What We Don't Love About the 2019 Toyota Corolla Hatchback:

Exterior View (9/10)
The Toyota Corolla Hatchback needs to work within the constraints of practicality. It can't be a fancy sports coupe and still be affordable. Given the constraints Toyota has to work within, we feel Toyota did a great job of making the new Corolla suit its target audiences. It has some style baked in but isn't polarizing.

Up front, the new Toyota catamaran-inspired grill looks attractive and bold to our eye. Grills are tricky. No doubt there will be naysayers who don't like it. We would ask those folks, "Which all-new $24K hatchback looks better to your eye?" 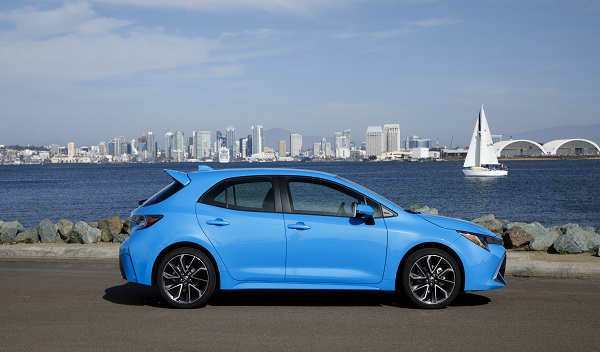 v
The front headlights are attractively sculpted and flow nicely toward the center of the upper grill area. The small foglights and chrome elements add a bit of bling to the XSE trim, setting it apart from the SE. The side view is helped by alloy wheels even on the base trim. Through which rear disc brake calipers can be seen. Even Toyota's much pricier Tacomas still have rear drum brakes.
In back, Toyota has done a very nice of job of again bringing the catamaran styling element in and the rear wing looks cool but not silly. Notice that the XSE has a more pronounced wing and the SE a toned-down flush-mounted one. 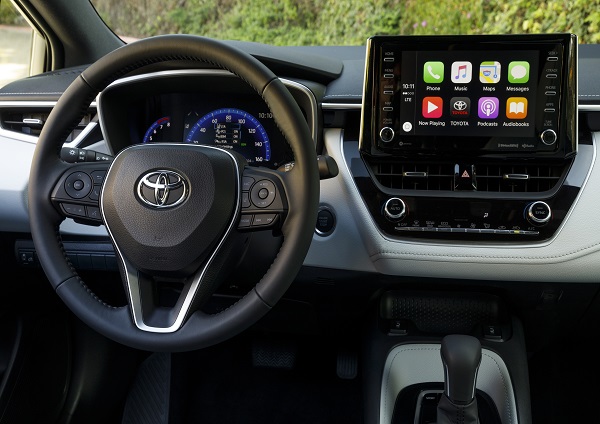 Interior Comfort, Quality, Ergonomics (9/10)
Inside, the materials of the 2019 Toyota Corolla Hatchback are Mazda-quality and upscale. Good luck finding another car that starts at $21K with this high level of interior fit, finish, and refinement. In the SE, the dash is monochrome. In the XSE, the dash can be two-tone and it really adds a lot of brightness to the car when the white is added on the front of the dash. 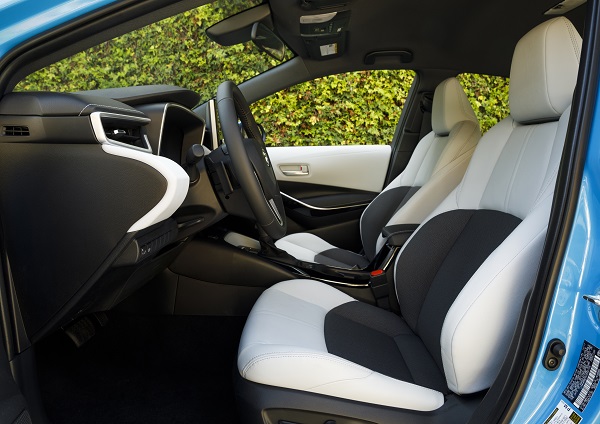 We found the seats in our base SE to be comfortable, but they lacked lumbar support. Something we feel some buyers may want to consider in the pricier XSE which does have lumbar support along with power adjustment. The cloth of the SE seats we tested was comfortable, quilted in places, and seemed a bit more than basic. The XSE has two-tone seats of a higher grade material.
In back, the seating area is tight but workable for adults. The front seats do need to move up a bit to allow for legroom in back. If you have children, be prepared to bend and twist more than you would if you were placing them into a subcompact crossover. 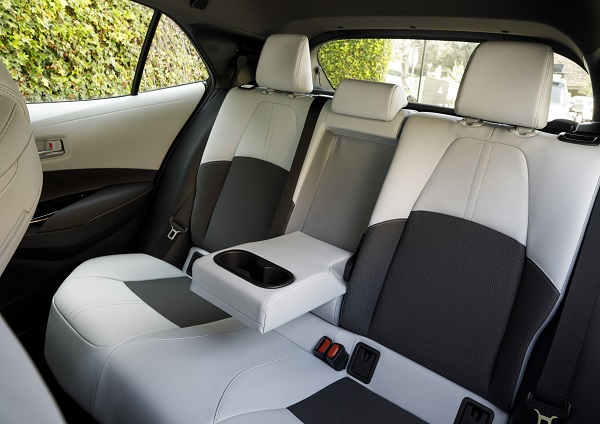 Technology (7/10)
Our SE trim Corolla Hatchback came with the Preferred Package which takes the infotainment system up a notch. The screen is huge, about the size of a tablet. Toyota reserves the sides for two vertical rows of buttons that bring you to the primary places you will want to navigate in the system. This reduces fingerprints and even better, reduces the frustration of tapping a touchscreen hoping your tap will be recognized. The buttons have a "nice buttony feel." Toyota also thoughtfully kept the volume and tuner knobs on this system. Honda's designers can't wait to steal them from you and Mazda's screens look tiny compared to this new Toyota system.
The Toyota Entune system is not bad, but doesn't light our fire. Why should one have to download an app to make an infotainment system operate with apps already on one's phone? We did it and moved on, but we use infotainment systems in cars all the time that don't require this nuisance.

Apple Car play (with a cord) is now available on this Toyota making it one of the first vehicles from the company with the now common technology. Alexa integration is also available as is a small menu of apps that work directly with the phone as opposed to just streaming the audio via the Bluetooth system. Sadly, Toyota does not integrate Android Auto. So 43% of users (me included) are out of luck. For us, Toyota's nav solution is Scout GPS Link. This app may work well, and we won't pre-judge it, but its rating of 2.4 on the five-scale is not a big endorsement.

HVAC controls are divorced from the infotainment screens and reside under the tablet. They work wonderfully and not having to peck into the touchscreen to turn up the fan is a nice luxury. 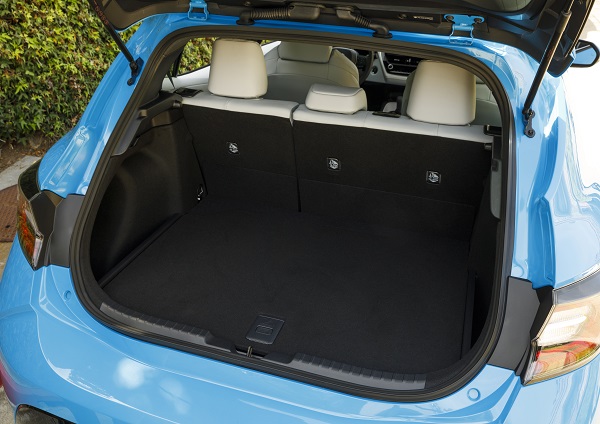 Fuel Economy (10/10)
Here's the really good news. In combined highway and suburban driving over 400 miles, we measured our fuel economy to be 43 MPG at the pump. That is just amazing for a peppy gasoline-powered car. This tester measured 42 MPG in a 2015 Golf TDI diesel on the same routes just before they were yanked from the market for cheating on emissions.

The Corolla Hatch will have two sets of EPA estimates according to Toyota (and this information is not yet posted officially at FuelEconomy. Gov). The SE will be rated at 28 City /37 Highway /31 Combined MPG when equipped with its standard six-speed manual transmission and 32/42/36 MPG when equipped with the optional "Dynamic-Shift CVT" automatic transmission we tested. If these numbers are confirmed, they will top the Chevy Cruze Hatchback diesel.

The XSE trims will earn a rating of 30/38/33 MPG with the automatic and Toyota is still working out the numbers for the manual XSE.
Suffice it to say, the new Toyota drivetrain in the Corolla Hatch, which is also planned to be used in a new Lexus model, will be one of the most fuel-efficient non-hybrids in America.

Predicted Reliability, Initial Quality Ratings (9/10)
Since this is an all-new vehicle with an all-new drivetrain, we are hedging a bit on the score here. Still, Toyota's reliability, durability, and quality top many rankings by independent groups. Consumer Reports is giving the new 2019 Corolla a 5/5 for expected reliability. 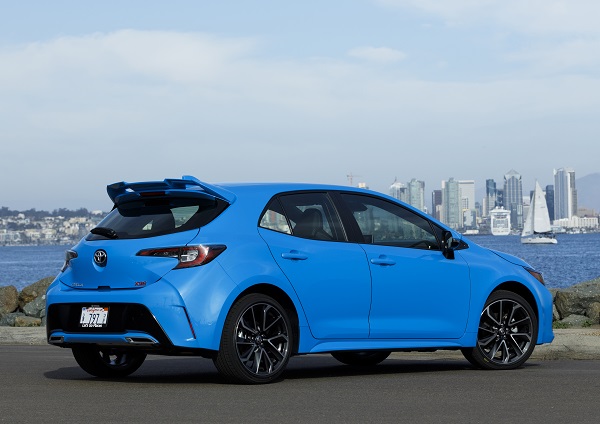 Safety (10/10)
Toyota has emerged as the leader in the industry for safety for two reasons. First, in a real-world analysis of driver deaths, Toyota has the most models with the top rating of "zero." Second, Toyota leads all automakers in offering standard active safety systems like emergency auto braking with pedestrian detection. The new Corolla Hatchback has active safety on all trims at no added cost. It is not optional. Adaptive cruise control is one enjoyable benefit of that. We recently tested a $50K 2018 compact model from BMW that did not have this technology.

IIHS and NHTSA have not yet tested the new 2019 Corolla Hatchback. Watch for that information to be made ready shortly after the model goes on sale in the coming month.


Performance (10/10)
Toyota's new "2.0-liter Dynamic-Force direct-injection inline four-cylinder engine" has 168 hp. We found it to be more than enough for daily driving. Toyota is not pretending the new Corolla Hatchback is sporty like a VW GTI or Hyundai Elantra GT Sport. Those models cost 25-50% more than this new car. We would compare the new Corolla Hatchback to the Mazda3 with its base engine. Peppy is the right word, not quick.

Handling is outstanding. We may have glanced at a few other testers' reports just to confirm what we thought we were experiencing. It was that surprising to us. The new Corolla Hatch we drove with its base tires was fun on back roads and felt refined and confident on the highway. Reviewers are in agreement that the new Corolla is a driver's car.

The next pleasant surprise is that ride comfort on the base tires of our SE was outstanding. Very smooth over even substantial road imperfections. Toyota nailed the chassis and suspension tuning on the new Corolla Hatchback SE. If you opt for the XSE, test it yourself to see if the ride is just as smooth or if larger diameter wheels with lower-profile tires make it too firm for your taste.

Pricing and Value (10/10)
The Corolla Hatchback will start at just $20,910 including destination and delivery charges. Our SE tester with the added package had a price as tested of $23,410. A fully-loaded automatic-equipped XSE will cost about $27K. At these prices, with Toyota's two years of included maintenance, it is hard not call the Corolla Hatchback a great deal.

Total Score and Competitive Comparison (74/80, 93%)
The new 2019 Toyota Corolla Hatchback scores high in almost every category and a perfect 10/10 for fuel economy, safety, performance, and value. While other big automakers like Ford are announcing that they will be leaving cars behind, Toyota continues to pour its heart and soul into making affordable vehicles owners will love to drive and live with. The new Corolla Hatchback may not compete with the flashy sports models this size, but it will outsell all of them combined because it is so good at what it does for so many different target customers.
Those looking for vehicles to cross-shop should start with the Mazda3 and base trims of the Hyundai Elantra GT (hatchback). Both have many of the same positives that the Corolla offers. Android owners may find that the Hyundai better meets their expectations for infotainment connectivity. Those who value handling and interior quality may find the Mazda3 to be up their alley.

Although the compact hatchback is not a new segment, what is new is the level of sophistication these vehicles now offer buyers on a budget. The 2019 Toyota Corolla Hatchback may well be the one to beat in this very competitive class of cars.