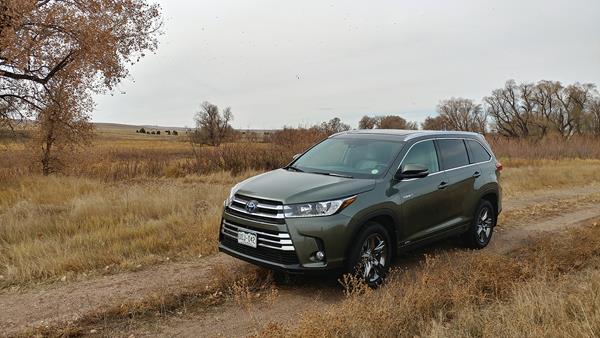 After a significant refresh last year, the Toyota Highlander remains largely unchanged for 2018. This three-row family crossover didn't need much changing, though, being one of the best family-oriented crossover-SUVs on the market today.

The 2018 Toyota Highlander fits into the midsize three-row crossover segment. It carries the exterior size and appeal of the segment and brings a very ergonomically well-done interior. Those qualities make the 2018 Highlander a top pick for this segment, though some rivals might contend for consumer attention.

Chief among the 2018 Highlander's high points are its attention to detail and thoughtful design elements. These qualities make everyday things like grocery hauling, kid wrangling, and weekend get-away-ing easier on parents. With the Highlander Hybrid option, stellar fuel efficiency is also added to that equation.

The 2018 Toyota Highlander continues with the upgrades made in 2017 largely unchanged. This three-row crossover is available with seating for up to eight and in seven trim package models. There are three drivetrain options for the Highlander, depending on trim model chosen, including the Hybrid.


What We Love About the 2018 Toyota Highlander:


What We Don't Love About the 2018 Toyota Highlander: 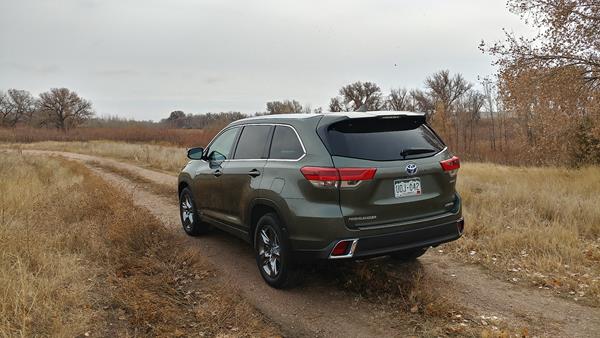 The 2018 Toyota Highlander has a somewhat aggressive grille to give its contemporary looks an upgrade. The slotted grille gives the Highlander a more SUV-like appearance front the front, adding to the crossover's visual credibility. The front of the Highlander is more aggressive without becoming sinister, thanks to the near-deletion of the bumper fascia in the design.

A sleek look to the door panels and bodywork keeps the 2018 Highlander looking contemporary, though the slightly sloped roofline adds a bit of forward movement and sportiness to the crossover. The upward stroke at the bottom edge and a matching upward tilt to the beltline just before the finish on the rear door adds to that impression. Behind all of that, the LED tail lamps on the Highlander and its rounded hatch shows off the curved window within. Keeping the substantial rear bumper's look holds the Highlander's credibility as a capable SUV.

With the SE model, some highlights are added to give the 2018 Highlander a more sport-themed appeal. In the Hybrid model, decor changes such as the blue backgrounds to the Toyota emblem and some badging let onlookers know that this is the fuel efficient model. 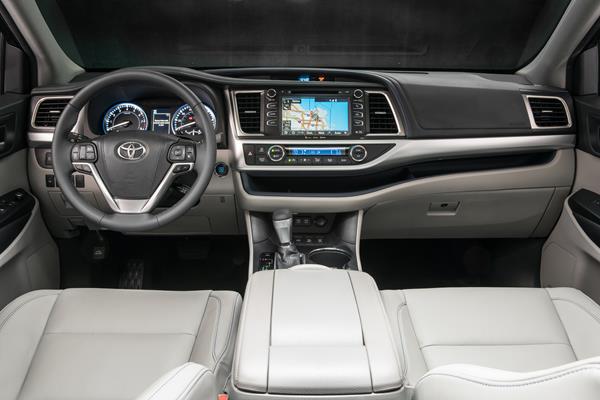 Ergonomics reign supreme in the 2018 Toyota Highlander's interior design. Quality of workmanship plays into that focus, making the interior of this crossover a difficult one to top. For the driver and front passenger, entry and egress are aided by low door sills and tall openings. The second row sees the same good treatment, but the third row requires a little more effort, though aid from the wide rear doors and the forward-tilting seats helps greatly.

The driver and front passenger will find a convenient shelf that runs from the center of the dashboard's console and almost all the way to the edge of the front passenger's seat. This is an excellent place to drop phones, gadgets, wallets, keys, and other items that otherwise tend to float around in cup holders or center bins. A convenient cord pass-through at the driver's end of that shelf allows a phone to be plugged in without the wire dangling around the outside of the console.

The instrumentation for the driver, as well as most controls, are easy to find and use. Some areas of those can get a bit busy, such as the space to the left of the steering wheel where a "who knows what this is for" slide-out bin and some almost-hidden buttons reside. The reach required to operate the infotainment from the driver's seat can also be a bit far for some. Reaching controls is easy, though, and the high seating position in the Highlander gives the driver good visibility outwards.

The second row of seating in the 2018 Highlander is a bench by default with captain's chairs an option. The bench seating is good, with good and comfortable outboard positions that offer plenty of legroom and headroom for adults and easy child safety seat installation. The center position is a bit narrower and less comfortable, but good enough for children and getting three booster seats across is easy in the Highlander. The captain's chairs option for the second row offer seating that's almost as comfortable as the front passenger's seat and with more room besides. The pass-through point between the captain's chairs makes access to the third row easier and a fold-up drink holder and tray is a nice touch. That drops down quickly when not being used to open up the pass-through again.

The third row in the Highlander is largely for kids, but sits three across nicely. Booster seats won't quite fit three across, but two child safety seats and a child without a booster is realistic.

Cargo space in the 2018 Toyota Highlander is good for the class at 14 cubic feet behind the third row and up to 83.7 cubic feet with the third and second rows folded. Those seats fold flat as well, though the captain's chairs leave a large gap between. We also like the dual access options for the rear hatch, with the whole hatch opening and just the glass in the upper portion opening separately if needed. This makes packing in groceries, extra blankets, or whatever a much easier prospect. Added bonus items like grocery bag hooks, tie-down points, and milk jug-sized bins on the edges add to the usefulness and daily ergonomics of the 2018 Highlander. 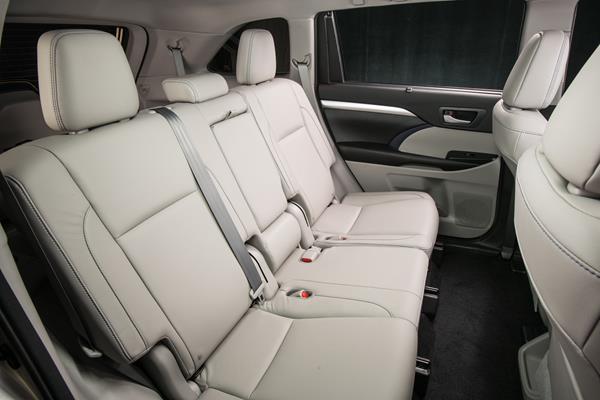 The 2018 Toyota Highlander comes standard with a 6.1-inch infotainment touchscreen.Basic Bluetooth connectivity and access to the radio are about the limits of this lower-end system. Most trims comes standard with the better 8-inch touchscreen and its Entune suite of apps. Upgrades for the entire Entune App Suite and some smartphone integration are available. We do note the lack of Android Auto and Apple CarPlay and that the proprietary Entune App is not much of a replacement for those.

The infotainment in the 2018 Highlander is easy to use and simple in design. It has some limitations, but is useful and easy to get around with. We'd like to see a more updated, less dated user interface and the employment of better smartphone integration like that found in competing crossovers.

The Highlander has always had fuel efficiency as a strong point and that continues with the 2018 model. The base engine, which is available only in the base model Highlander, is EPA-rated at 20 mpg in the city and 24 mpg on the highway. Other four-cylinder options on the segment are about the same.

The Highlander Hybrid is EPA-rated at 30 mpg in the city and 28 mpg on the highway. Our drive in a 2018 Highlander Hybrid this year proved those numbers with an average of 28 mpg overall after a week of driving. 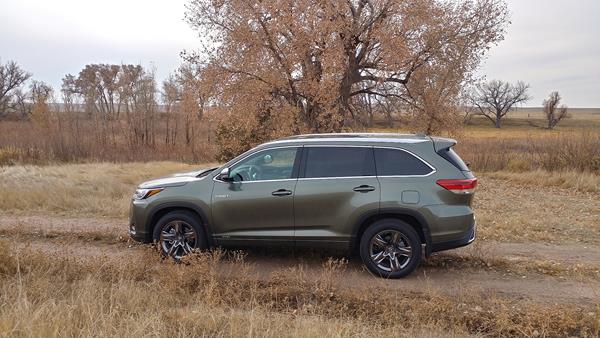 The 2018 Toyota Highlander is rated at "Better Than Most" in the J.D. Power and Associates Vehicle Dependability Study. There have been two recalls for the Highlander this year, one of which is a safety recall for the brakes and the other for a labeling mistake caught early in the 2018 model year's production.

The 2018 Toyota Highlander has received top marks for safety from both crash testing bodies. The National Highway Traffic Safety Administration (NHTSA) has given the Highlander a 5-Star overall crash test rating, including five stars for side crash test results and four stars each for frontal and rollover results. The Insurance Institute for Highway Safety (IIHS) has similarly given the 2018 Highlander top scores of "Good" for all crash tests conducted and published. Toyota's active safety and crash mitigation systems, called Safety Sense, are standard on all Highlander models.

The base model 2018 Toyota Highlander comes with a 2.7-liter four-cylinder engine mated to a six-speed automatic transmission. The engine produces 185 horsepower, which is just enough to move the Highlander around, but not enough to make it feel confident about getting anywhere. Frankly, this engine choice is really only suitable for fleet buyers and taxis. Most consumers will feel cheated with this powerplant.

Nearly all Highlander models come standard with the 3.5-liter six-cylinder engine that outputs 295 horsepower and that mates with an eight-speed automatic transmission. This is a far better choice that offers fuel economy that's similar to the little four-banger, but with a much better feel. The transmission shifts well and (usually) quietly and the Highlander is ready to go under passenger load or with a solo driver and when going up hills or hitting freeway speeds quickly. This isn't a sporty option, but it's a confident one.

We like the feel of the Highlander under the V6 too, especially in road presence. Steering is good and intuitive, though not precise. Maneuverability is good as well, as is road absorption and feel. The Highlander is quiet on the highway and does well for itself off-road too, handling light and medium-duty off-pavement driving better than many might expect. Both front-wheel and all-wheel drive are available in the Highlander V6 with both delivering good drive quality. Those who live where weather requires it will feel more confident with the AWD option.

The 2018 Highlander Hybrid model is very different from the other two options in both its power output and road feel. It's not negatively impacted, but it does drive differently due to the change in weight distribution and power outlay. The Hybrid model utilizes a detuned version of the 3.5-liter engine mated to a continuously variable transmission (CVT) and three electric motors. All-wheel drive is standard in the Highlander Hybrid. Most of the drive differences are in the regenerative braking, which is a bit clunky in the Highlander Hybrid with the switch from regen to standard braking being a bit harsh sometimes. Vehicle balance is a little different too, in the Hybrid's favor as the batteries and extra weight of the transmission and motors are all low-centered, which lowers the center of gravity for the Highlander Hybrid overall. This makes for better balance to the crossover's steering and handling. All good things.

The 2018 Highlander is a bit spendy compared to some of its contemporaries, but its sales tend to keep going upwards regardless. The take rate for the Hybrid model option is high, which is a good sign that it's an option of choice. We'd recommend looking at the XE Plus and XLE models for the best balance of price versus accouterments and at similar trims for the Hybrid model if fuel efficiency is your priority. 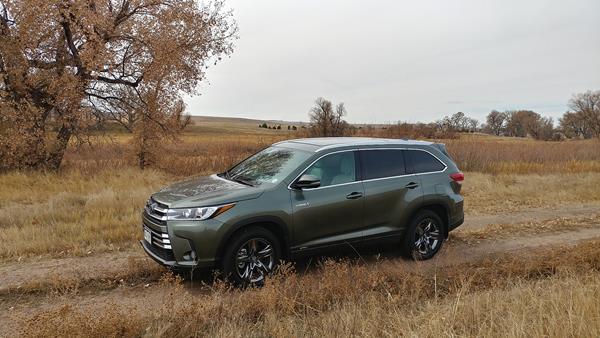 The 2018 Toyota Highlander sits within our top three picks for a midsize three-row crossover. We'd shop the Highlander against the equally well-done Chevrolet Traverse, though, and the lower-priced Kia Sorento. Both offer excellent daily use ergonomics and a strong powerplant with similar fuel economy. The Honda Pilot is also a good seller in this segment, offering an upscale interior but not as much for ergonomics. The Ford Explorer offers more capability if towing and off-pavement getting around are your needs.

Against all comers, though, the 2018 Toyota Highlander holds its own on most fronts. Others are a bit prettier or have newer designs, but the Highlander's attention to ergonomics and family orientation pay off well for it. We also recommend considering the Hybrid model, whose price premium is not very high, as an excellent and unmatched option in the field.