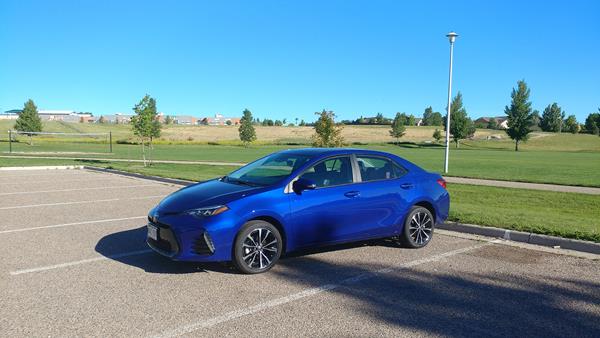 The Toyota Corolla has been a mainstay compact sedan for over 50 years. The Corolla's appeal lies in its roomy interior, reputation for excellence, and utilitarian nature. The compact sedan market has become heated, however, and the 2018 Corolla is up against some stiff competition.

For the 2018 model year, the car carries over largely unchanged from the updates made last year. Those changes added some desirable safety equipment and upgrades to technology. For this year, the 50th Anniversary Edition trim point has been dropped. Compared to most in the segment, the 2018 Corolla has high-end standard safety equipment that's only rarely available in the segment. It's also a fuel sipper by comparison and has a solid reputation for reliability. It does lack, however, is interior finish and performance.

From almost the beginning, the Corolla has used the same formula for success: it's compact, front-wheel drive, and not very expensive. The 2018 Toyota Corolla has six trim levels, four doors (the Corolla iM hatchback is reviewed separately) and uses the same engine in all renditions.


What We Love About the 2018 Toyota Corolla:


What We Don't Love About the 2018 Toyota Corolla: 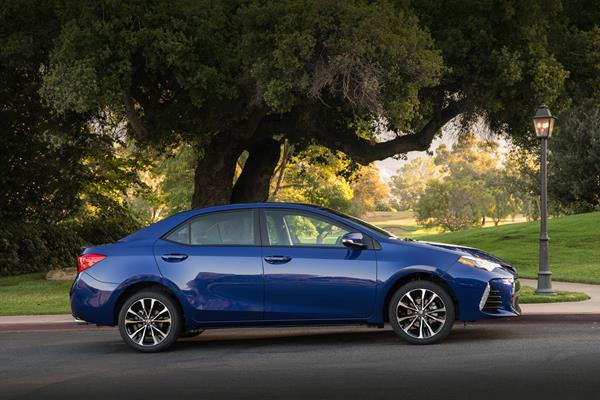 Relative to the segment, the 2018 Toyota Corolla is a smart-looking car. It's somewhat aggressive (but not off-putting) front fascia, clean bodywork lines, and simple profile are a good start towards finding good looks that are often ignored in the low-end compact car segment.

Most compact cars in the entry-level, low-cost arena suffer from the same design elements: tiny wheels and tires, a lack of adornment to body paneling, and short hoods that appear ardvarkish. The Corolla has all of these elements in place, but the thin grille and aggressive lower intake flanked by thin, peering headlamps and strong hood indents help mask that.

Highlights include slightly bulbous tail lamps at the rear, a well-defined trunk, and a body line that runs from the front fender, through the door handles, and defines the rear haunch. These elements are simple, but aesthetic ways of moving the eye away from the inherent flaws of the segment and help make the Corolla look more appealing.

To be frank, no car in the entry-level compact sedan segment is what anyone would define as having "ravishing" good looks. The 2018 Corolla stands out, however, for its better-than-average looks in a generally homely segment of cars.

The interior of the 2018 Toyota Corolla is well done on most fronts. It's roomy, getting in and out of the front seating is easy, and the cabin's layout is familiar. We like the low step-in height and the high door openings for ease of settling into the Corolla and the rear doors sport the same qualities, but have more limited knee room (common in compacts).

The driver's position is very good with lots of adjustability, but we'd like to see more breadth to the telescoping steering column, at least in the higher trims, for taller folks. As it is, those of us who are taller have to compromise leg cramping for better steering access. 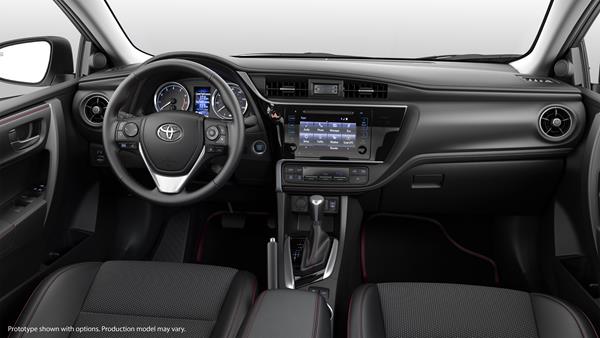 The other hit on the Toyota Corolla is in the quality of materials. The design and ubiquitous use of hard plastics are a bit cheap given today's market and the more upscale appeal of most newer designs. An improvement over previous renditions of the Corolla, however, is in the road noise, which is far lower in the 2018 model.

Cargo space is not all that great in the 2018 Corolla either. The 13 cubic feet of trunk space is below average for the segment and the split-fold rear seats (standard) do not fold flat or even close to it. Parents will also find that the LATCH anchors in the Corolla are buried fairly deep and require a lot of pushing to get the seats to latch.

The 2018 Toyota Corolla uses the Entune technology interface from Toyota. Sadly, this is behind the curve compared to others on the market. The proprietary Toyota app is decent enough, but is not a substitute for Apple CarPlay or Android Auto, neither of which is supported. What's more, the small-ish touchscreen (even after upgrade) is very sensitive and prone to accidental mis-touches when the vehicle is moving.

Overall, there are far better options than this. The Corolla is way behind the curve in infotainment and stereo tech compared to rivals on the market.

The 2018 Corolla gets very good fuel economy. The standard models are EPA-rated at 28 mpg in the city and 36 mpg on the highway. In our week with one, our average MPG was about 31 mpg overall, which is commensurate with the EPA's estimates.

The Eco models of the Corolla are rated at 30 mpg in the city and 40 mpg on the highway. 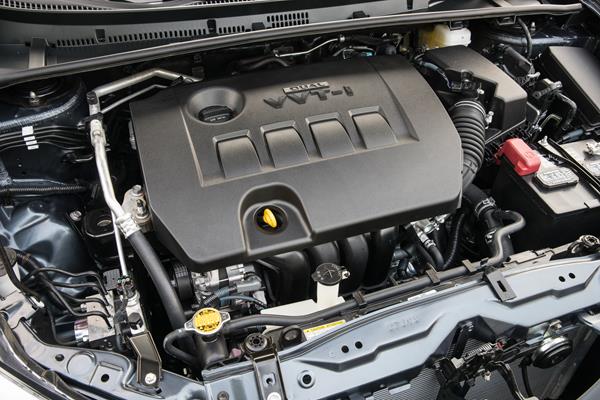 The 2018 Toyota Corolla is rated as "Among the Best" for reliability by the J.D. Power and Associates Vehicle Dependability Study. There have been no recalls on the vehicle (as of this writing).

The 2018 Corolla has some of the more advanced safety options in its segment, most of which are standard. The National Highway Traffic Safety Administration (NHTSA) has given the Corolla five stars for safety, with four stars each for frontal and rollover crash results and five stars for side crash results. The Insurance Institute for Highway Safety (IIHS) has given the Corolla top scores of "Good" on all of its published crash tests for the 2018 model year.

Performance is not the Corolla's forte. The car is powered by a 1.8-liter four-cylinder engine that produces 132 horsepower in its standard rendition and 140 hp in the Eco models. A six-speed manual transmission is standard in the SE trim and a continuously variable transmission (CVT) is standard in all other trim points.

The engine and transmission are not in a hurry to get the car anywhere. Around town, acceleration and feel are good enough to get around with basic confidence. On the highway, however, the Corolla struggles to get to and keep speed and is loud about doing so. When pressed, there is marked hesitation before the Corolla's CVT will raise RPM so that the engine can pour on more power.

The difference in power between the standard 1.8L and the Eco models' 1.8L is negligible.

In the corners, the Corolla's chassis is non-committal and neither terrible nor great. It just is. Body roll is noticeable in hard turns, but otherwise not bad. Road absorption is about as should be expected for an entry-level compact car, but there are smoother options on the market.

We like the Corolla at low speeds, but beyond that, it becomes a fairly dead fish, especially when compared to like-priced rivals.

For those looking for a practical compact car with lots of safety features and plenty of fuel economy, the Corolla is a good choice. It's priced below most of its major competition in most renditions, but strong demand for the Corolla means finding a great deal will take work.

We recommend looking at the LE Eco model for maximum fuel efficiency or the SE model for value-oriented goodness and the more fun manual transmission as an option. Both are good choices for their respective needs. 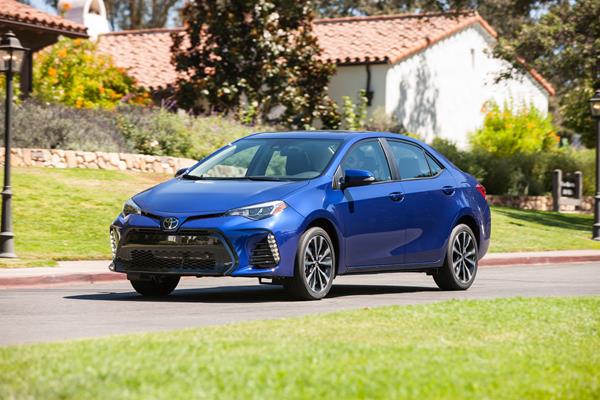 The most competitive rival to the 2018 Toyota Corolla in the compact segment is the Honda Civic. The Civic offers a sportier drive quality, better interior, and costs a bit more. Also on offer is the well-done Mazda Mazda3, which is also available as a hatchback and which offers good pricing and an excellent all-around design. Another option is the all-new Kia Rio, which ups the game in terms of price versus what's included and for its very upscale feel and good road presence. All are good options against the Corolla and should be cross-shopped carefully.

The 2018 Corolla does offer a good round of the basics with solid fuel economy returns to boot. It's worth noting for its high reliability expectation and great safety measure as well. The 2018 Corolla is still competitive in an ever-improving compact car market.