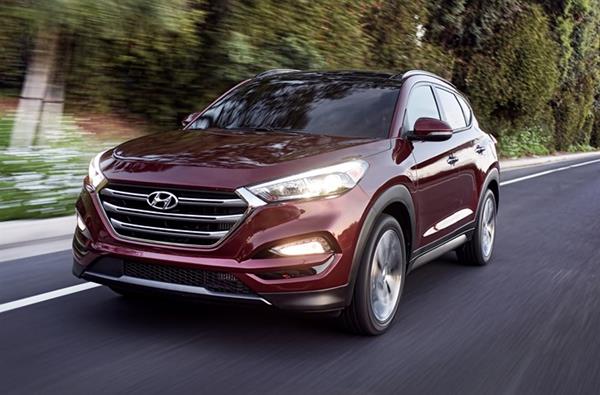 The Hyundai Tucson was redesigned last year and continues forward with the excellent upgrades made to the compact crossover then. Changes this year include the addition of some technology for the higher-level infotainment system, a new trim model in the SE Plus and a new special edition model called the Night.

The sharp styling and slightly beefier size of the Tucson set it apart from its previous generation and give a bit more space between the Tucson and its smaller sibling, the upcoming Hyundai Kona.

The 2017 Tucson stands out for its excellent styling, the great turbo-four and dual-clutch transmission offered in most models, and the fun drive this crossover offers overall. Excellent crash test ratings and a higher-than-expected dependability rating are also big bonuses for the Tucson, whose industry-leading warranty is a big selling point.

The very well-done 2017 Hyundai Tucson definitely deserves a high score and should be on every shopper's short list of choices in the compact crossover segment.


What We Love About the 2017 Hyundai Tucson:


What We Don't Love About the 2017 Hyundai Tucson: 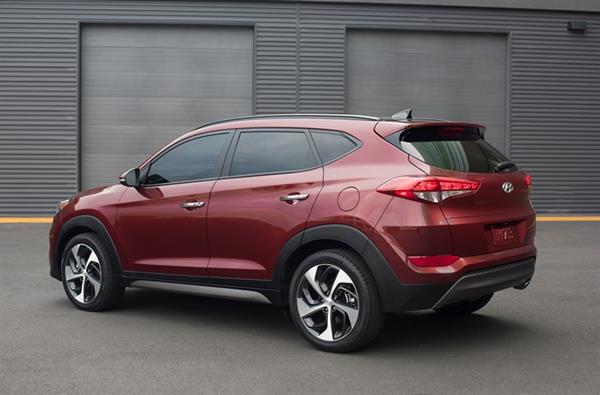 As we noted with last year's debut of this new-generation Tucson, the Hyundai Tucson is a very good looking crossover. The wide hexagonal grille is flanked by high-running, thin headlamps and with matching fog lamps below on some models. The air intake below the grille is understated to keep emphasis on the slotted chrome work above.

The hoodline for the Tucson is relatively straight with beveled edges that come down to either side to begin the formation of the fenders. Fenders at front and rear for the 2017 Tucson are indicative of power, with a bit of clearance between tire and fender well to show that this crossover can be taken off the pavement. Fender edging accentuates that idea.

The roofline for the Tucson is sloped rearward to give the impression of forward movement and a good amount of sportiness. A spoiler above the rear hatch and a slightly rounded rear hatch door complete that look. Lines along the Tucson's bodywork push it forward with slightly upward movement as they move towards the rear lamps.

Trim levels have varied wheel options and the new SE Plus trim adds a bit of chrome to the Tucson's exterior. Each model is otherwise the same from the exterior at each trim point.

The only exception to this is the new Night trim level, which blacks the 19-inch alloy wheels, blacks out the side mirrors and adds black matte side sills. 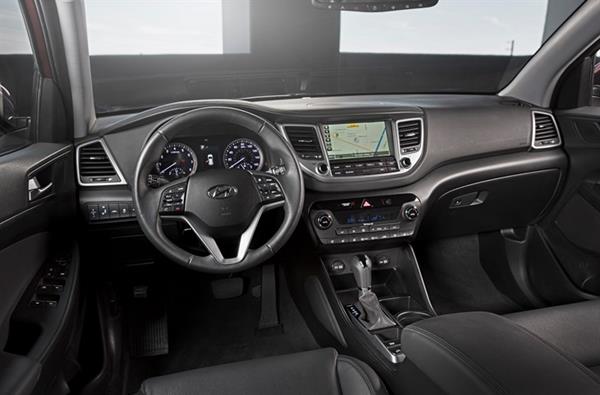 The 2017 Hyundai Tucson's interior is nicely done with a simplicity that engenders attractiveness. Materials quality is generally good, with even the harder plastics of the lower trims having texture to offset that. Getting a padded dashboard requires upgrading to the Limited trim level and that also comes with multi-tone door inserts and accents. This offsets the Tucson's lower trim levels from the upper trims.

This differentiation of trim levels is not unusual, but that much change between them is. Most makes tend to set apart trim levels with upholstery and small accent trims rather than with an entire materials choice for major components of the cabin.

The interior of the 2017 Tucson has a nice ambiance, with excellent seating for the driver and front passenger. Likewise, the rear seating is well done with a lot more roominess than might be expected in a compact crossover. There is no rear seat adjustment, and we see that as a potential oversight given the fast movement towards upscale that this segment is taking. Three across in the rear seat is doable if they are children, but getting seat belts around wide-bottomed child booster seats is going to require some work.

The backseat's excellent legroom came at the price of cargo space behind. The 2017 Hyundai Tucson has just 31 cubic feet of cargo space behind the rear seats, which is demonstrably lower than many in this class. We do like Hyundai's extra space beneath the cargo cover and the fact that the cover can be lowered into a bin. That couple of inches as a bin can be a boon when groceries prone to sliding around are stowed.

With the rear seats folded flat, which is possible with the Tucson's rear seating, there is almost 62 cubic feet of space available. The design of the 2017 Tucson means that the roof inside at center is higher than the roof at the cargo hatch opening, making loading bulky items easier than it would be otherwise.

Throughout the 2017 Hyundai Tucson are storage nooks and cubbies for a variety of things, making it very ergonomic for today's gadget-prone families. 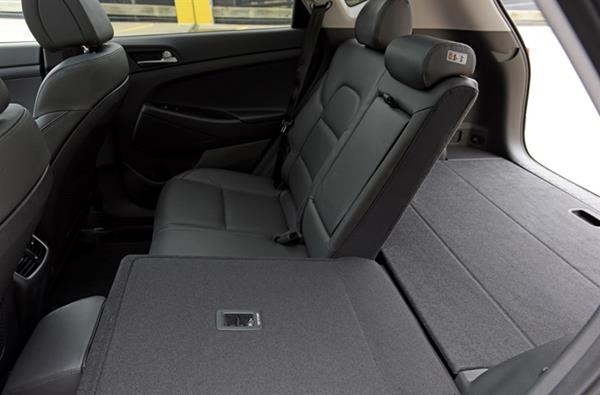 There are many things we like about the technology offered in the upper-level Tucson models with their 8-inch touchscreen and its clear interface with simple controls that are easy to learn. One thing we don't like is that the only way to get that tech is to go with the costly higher trims (Limited or SE Plus). They are not available as options for any of the lower trims.

The lower trims have a 5-inch touchscreen with simple options such as Bluetooth connectivity and satellite radio. The screen is mainly for the rear backup camera, which is standard on all Tucson models. Lower trims have to make do with a less useful driver information display as well, which doesn't turn to a larger color system until the Limited or SE Plus trims are chosen. We would much prefer that Hyundai democratize tech so that those opting for the lower trims without their added interior fittings be able to get the technology they might want.

The 2017 Tucson is otherwise good on the tech front with a great infotainment system. A major addition this year is Apple CarPlay and Android Auto for the upgraded infotainment.

The 2017 Hyundai Tucson is good for fuel economy with real-world numbers being very close to the EPA's estimates for the vehicle. The base model with its small 4-cylinder is rated for 26 mpg combined in front-wheel drive and 23 mpg combined in all-wheel drive. Those numbers pan out to 23 mpg in the city and 30 mpg on the highway for FWD and 21 mpg city, 26 mpg highway for AWD.

In the real world a Tucson SE Plus model returned about 24.5 mpg overall after a week's worth of driving in everyday situations. Last year our tests of the Limited model saw similar results. 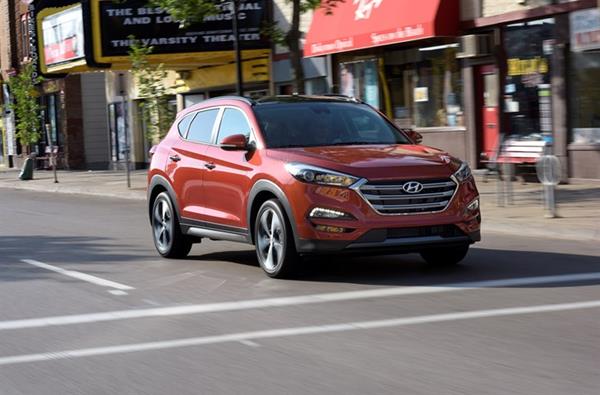 We were unsure of the reliability expectation for the all-new transmission in the 2016 model year Tucson, but now that it's had a chance to be vetted, we can see that it's turning out to be a great design. One recall for the Tucson's electrical system keeps us from getting too excited about long-term reliability with this new generation of the crossover.

The J.D. Power and Associates Vehicle Dependability Study does give the 2017 Tucson a rating of "Better Than Most" for expected reliability. Another feather in the Tucson's cap.

Safety is a strong point for Hyundai and is particularly well-done in the Tucson. The 2017 model year sees the rear-view camera as standard on all trims, and also blind-spot monitoring and rear cross-traffic alert standard on all but the base model.

The National Highway Traffic Safety Administration (NHTSA) rates the 2017 Hyundai Tucson with a full suite of five stars (out of five) for all crash tests done. Similarly the 2017 Tucson received the best scores available from the Insurance Institute for Highway Safety (IIHS) on all crash tests and safety system tests. Including for the small-overlap front impact test, which is often a sore point for compact vehicles. The Tucson is a Top Safety Pick from the IIHS.

We consider performance to be a definite high point in the 2017 Hyundai Tucson. There are two engine options, each with its own transmission, and drivetrains can be configured as front-wheel drive or all-wheel drive.

The base engine for the SE and SE Plus models is a 2.0-liter 4-cylinder that outputs 164 horsepower and 151 foot pounds of torque. A 6-speed automatic transmission is standard equipment, as is FWD. AWD can be optioned. This engine is sluggish compared to the smaller turbocharged power plant in the other trim levels, but still offers good acceleration and power for the class. It's sized about right for the Tucson and is neither too peppy nor too bored. Most buyers at these trim levels are likely to be more interested in the cost and will not feel slighted for having gone the cheaper route.

The engine that really shines in the Tucson is the 1.6-liter turbocharged 4-cylinder that is housed in the Eco, Sport, Night and Limited models. This engine outputs 175 hp and 195 lb-ft of torque through a beautifully-done dual-clutch automatic transmission with seven smooth gears. Again, both FWD and AWD are available.

For our money, the 1.6L is the way to go with its great mix of peppy off-line goosing and fun acceleration potential on the highway. The fast-shifting dual-clutch transmission is very well done and akin to that which can be found in much more expensive European makes.

The chassis and body framing of the Tucson have also seen great improvements with this new-generation of the crossover, tightening in key points and losing weight in others to make for a much more solid, sporty drive. The Hyundai is now one of the sportier models in the compact crossover lineup thanks in large part to this.

Last year we panned the Tucson for its lack of options in the lower trims and the requirement to go to the $30,000-ish price of the Limited model in order to get some desirables like high-end infotainment. We still see that as a serious sore point with the 2017 Hyundai Tucson, which adds only the SE Plus trim as a sort of peace offering on that front.

The Tucson is otherwise a good value in most of its trims, at least at their base level. Most buyers will be purchasing in this segment at the $25,000 to $30,000 point and the Tucson does well at those levels. Buyers should shop around and look towards competitive offerings from Mazda and Ford before settling on the Tucson. All three of these makes are good values in this segment. 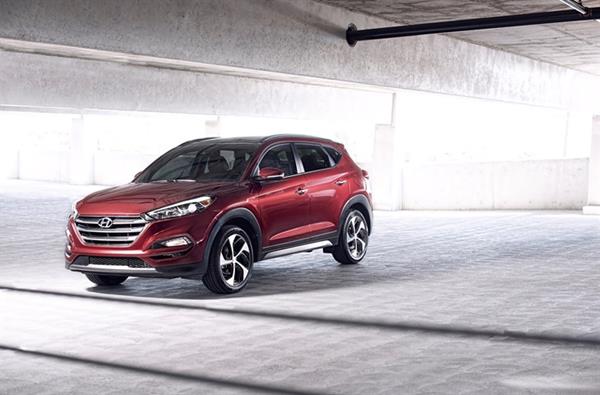 The 2017 Hyundai Tucson competes in the fastest-growing class of vehicles in America. Most automakers are bringing their A-game to this segment and finding a great vehicle here is not difficult.

Competitors to the Tucson include the Mazda CX-5, which matches the Tucson for sportiness and all-around excellence but offers a much better interior at lower trim levels with competitive pricing. Similarly, the Ford Escape is a surprisingly good option for this segment, especially in its lower trims when compared to the base model Tucson. The very similar in value but much more option-available Kia Sportage also matches the Tucson for its industry-leading 10 year warranty, making it a definite option for consideration.

We think most buyers for the 2017 Tucson will be looking at the middle trims with that excellent turbocharged engine and dual-clutch transmission. Sporty driving with the great exterior look of the Tucson are definitely a high plus for this vehicle. It's an all-around good crossover with a nice balance of daily usefulness and fun road presence. The Tucson definitely deserves to be on the short list of compact crossover considerations.