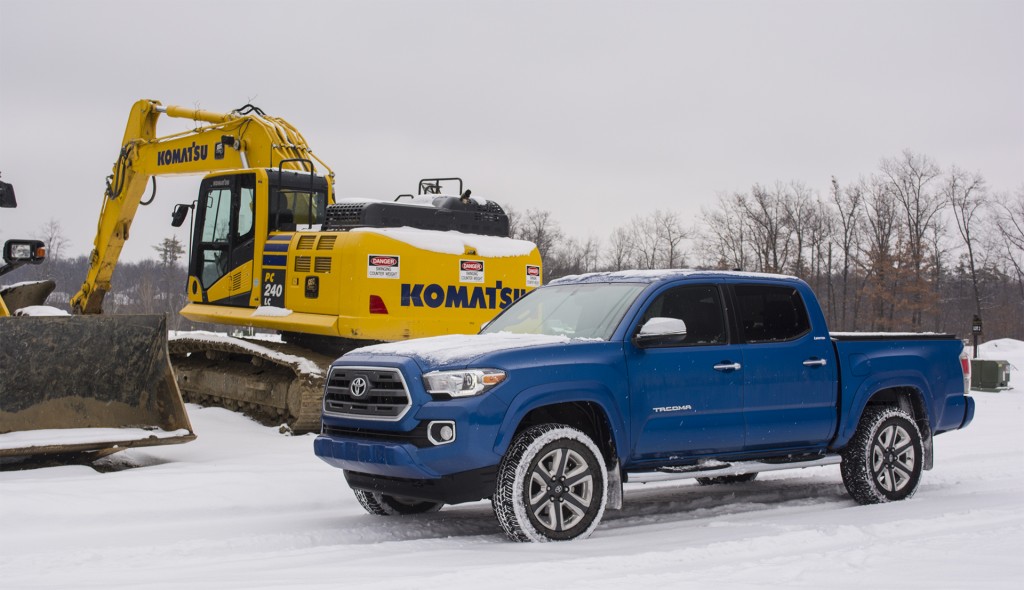 There are people who want a pickup truck for the capabilities it offers such as towing a trailer or hauling various loads. But don't want a full-size model as they find them hard to maneuver and they don't want to faint whenever they go to fill up the gas tank. Is there a truck for these type of folks? Yes, and it is the midsize truck. Now for a few years, you only had the choice between the Nissan Frontier and Toyota Tacoma. This was due to other manufacturers dropping their models because of declining sales in the class.

But the past couple of years has seen a resurgence in the class thanks to GM introducing the Chevrolet Colorado and GMC Canyon. These two trucks brought big improvements in terms of comfort, powertrains, and towing. Not to be outdone, Toyota introduced a redesigned version of the Tacoma to give GM's midsize trucks a real challenge.

What We Love About the 2016 Toyota Tacoma


What We Didn't Love About the 2016 Toyota Tacoma 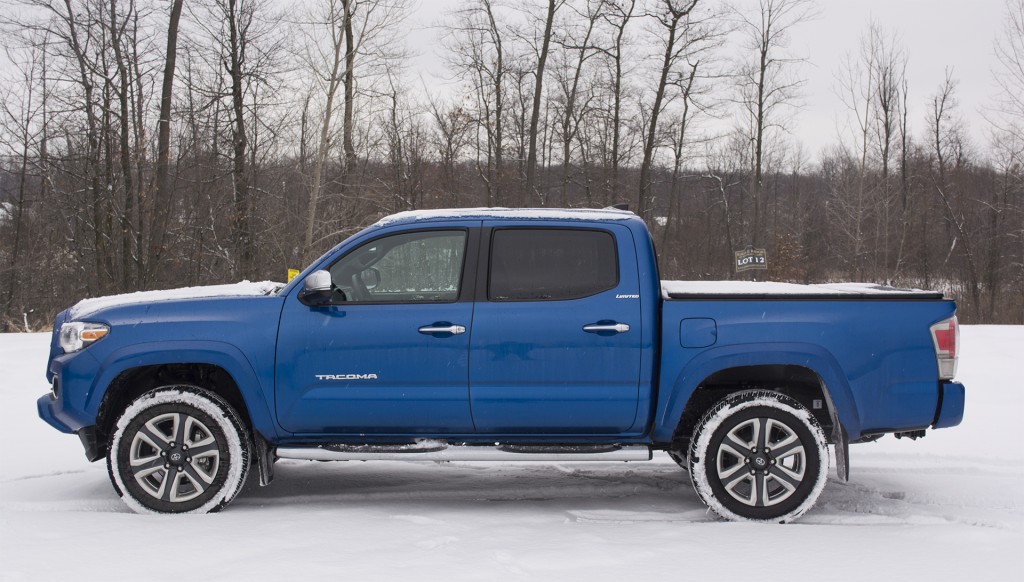 If it ain't broke, why fix it? This appears to be Toyota's mantra when it comes to the Tacoma's design as the basic shape remains unchanged. But look a bit closer and you can see there are some differences. Up front, Toyota has installed a larger grille, reshaped headlights, a more aggressive bumper, and a front skid plate. Around back is a new tailgate with 'Tacoma' embossed on the bottom.  Wheels range from 16-inch steel wheels on the base SR model to 18-inch alloy wheels on the Limited.

In terms of configurations, the Tacoma is only available in Access (extended) and Double (crew) cabs. Access cab models get a six-foot bed. Double cab models have the choice of either a five or six-foot bed. We had the five-foot bed with our double cab tester. The bed itself is made out of composite materials that are more durable than a steel bed. Using composite materials allows Toyota to introduce some clever ideas such as integrated storage compartments, adjustable tie-down cleats to strap down cargo; and the option of a 120V/400W outlet integrated into the bed. 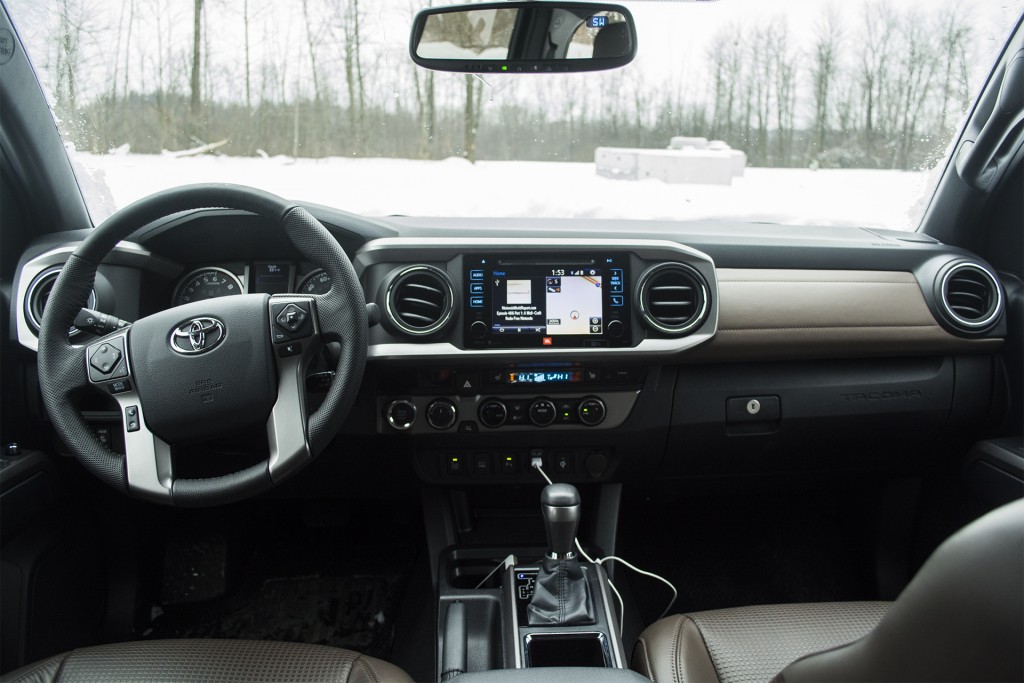 Interior Comfort, Quality and Ease of Use (6/10)

Toyota has done an excellent job of bringing the Tacoma's interior into the modern century. There are some nice design touches such as dash inserts that can vary on the trim level - TRD models feature rubber inserts while the Limited gets leather - and silver trim running around the infotainment system and vents. A fair amount of the interior materials are hard but feel very solid. Toyota knows that for most buyers, having an interior that stands up to rigors of work and play is more important than having some luxuries. One thing that hasn't changed is the user-friendly layout. Controls for various functions are easy to find on the dash.

Getting yourself comfortable in the Tacoma is very difficult. The front seats are mounted quite low and make you feel that you are in a bunker. Emphasizing this problem is the lack of a height adjustment. The steering wheel does offer tilt and telescope, but it comes up short on how high and far you can adjust the wheel. It seems the Tacoma wasn't built to fit around you. Instead, you have fit within the confines of the Tacoma. The back seat in the double cab is best reserved for small kids or cargo. There is a limited amount of head and legroom for an average sized adult. 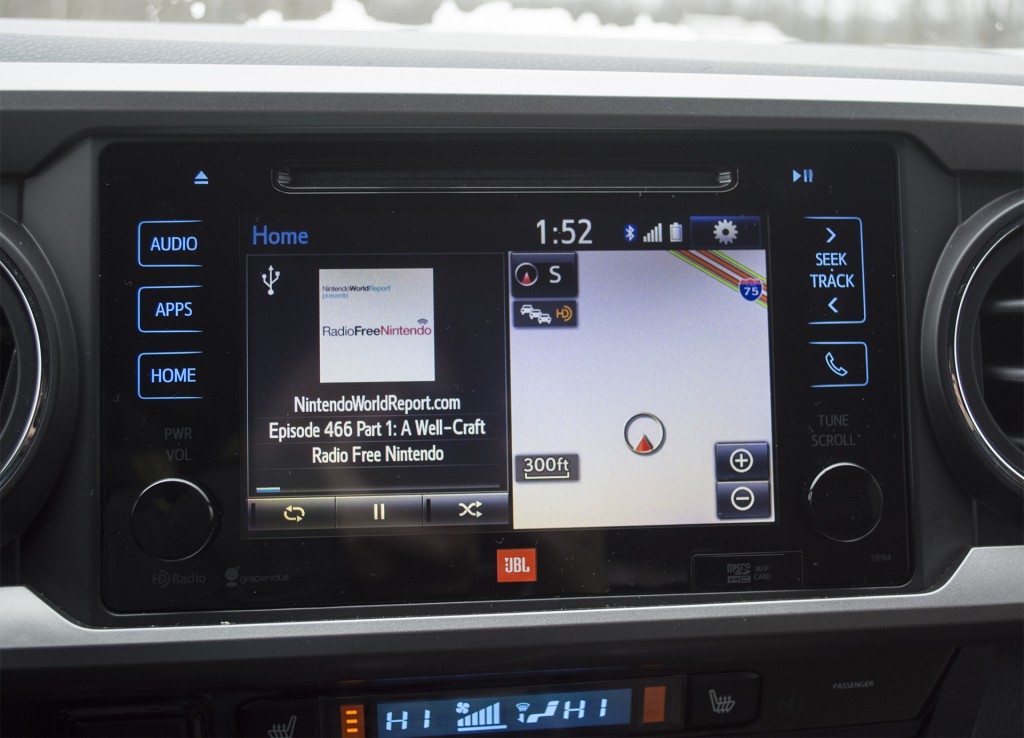 No matter which trim of the Tacoma you get, a touchscreen radio comes standard. Lower trims get a 6.1-inch screen while higher trims such as our Limited get a larger 7-inch screen with the Entune infotainment system. Using the system is very easy with a simple interface and fast performance. We also like how you can customize the home screen to provide different information on one screen.

The Tacoma also gets a Qi wireless charging system. The system uses inductive charging technology to provide power for compatible phones and devices. We cannot say how well this system works since we didn't have any devices that would work. One other interesting bit of kit is a windshield mount for a GoPro camera allowing you to record your off-road exploits.

The Tacoma is right in the middle of midsize trucks when it comes to fuel economy. Our Tacoma Limited double cab equipped with a V6 and four-wheel drive is rated by the EPA at 18 City/23 Highway/20 Combined. We saw an average of 19.2 mpg over the course of a week. 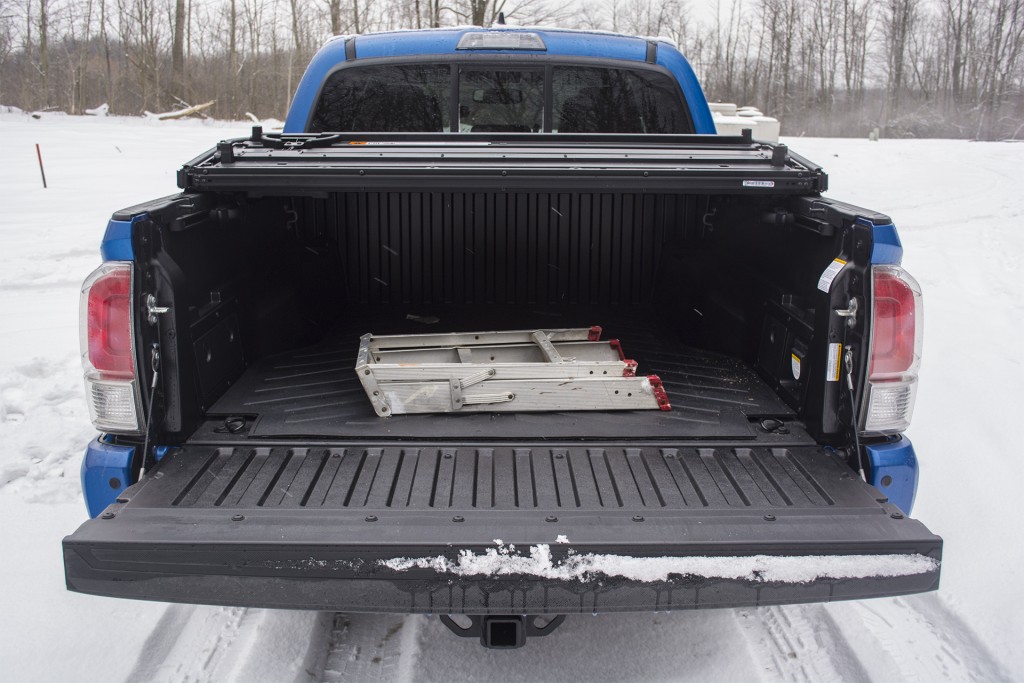 Toyota has a reputation for building trucks that stand the test of time. The Tacoma is no exception to this rule. At the moment, the groups who monitor reliability don't have enough data for the 2016 Tacoma since it went on sale towards the end of the last year. But the previous generation Tacoma has a very good record in reliability according to Consumer Reports and J.D. Power.

The 2016 Toyota Tacoma hasn't been fully tested by either the National Highway Traffic Safety Administration and Insurance Institute for Highway Safety. But the results so far paint the Tacoma as being a safe truck. NHTSA awarded the Tacoma four stars in the rollover test. IIHS has given the Tacoma their highest rating of ‘Good' for the moderate overlap front impact and side impact tests.

All Tacomas get a full suite of airbags including knee airbags for the driver and passenger; traction control, stability control, backup camera, and antilock brakes with brake assist. Standard on the Limited and optional on the TRD trims is blind-spot monitoring with rear cross-traffic alert. 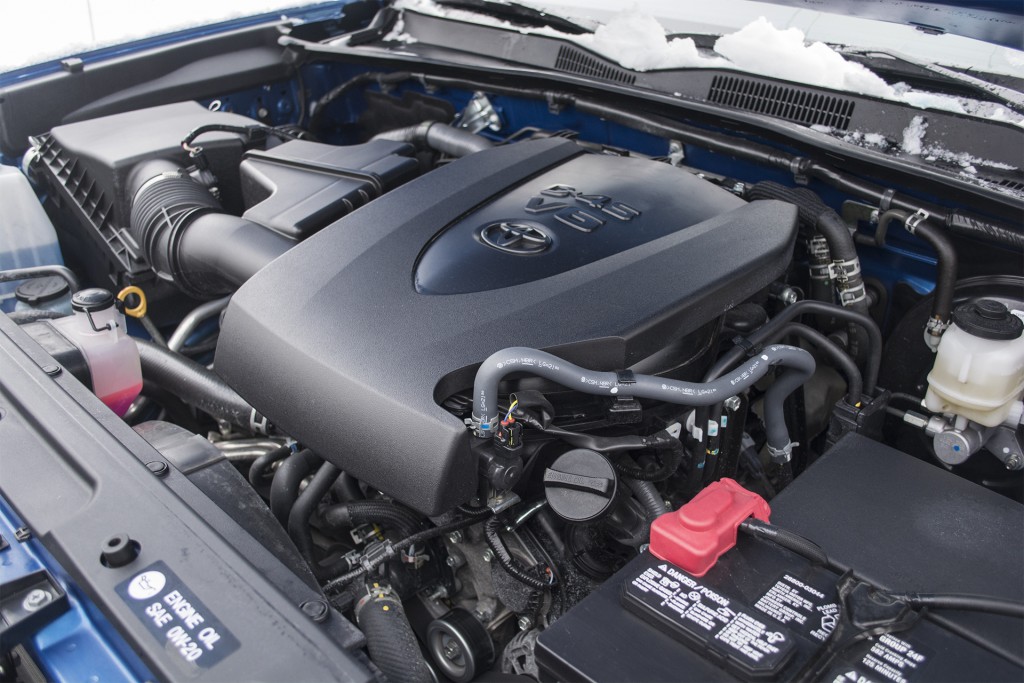 The 2016 Tacoma offers a variety of powertrain combinations. Starting with the engines, the base is a 2.7L four-cylinder with 159 horsepower and 180 pound-feet of torque. Optional is a new 3.5L V6 with 278 horsepower and 265 pound-feet of torque. Transmissions choices include a five-speed manual (four-cylinder only), six-speed manual (V6 only), and six-speed automatic. Finishing off your powertrain is the choice of either two-wheel or four-wheel drive. Our Tacoma Limited came equipped with the V6, automatic, and four-wheel drive.

The new V6 is a big improvement over the outgoing 4.0L V6. Power comes on strong and linear as you climb through the rev range. While the Tacoma may trail the Chevrolet Colorado and GMC Canyon in terms of V6 performance figures (305 horsepower and 269 pound-feet of torque), the Tacoma's V6 feels it has more grunt on the low-end. This is a good thing if you are planning to go off the beaten-path. The six-speed automatic is very smooth when it comes to changing gears though we did think it held on to gears a bit longer than it should.

Toyota says the Tacoma Double Cab V6 equipped with four-wheel drive can tow up to a max of 6,400 pounds. This is about 600 pounds less than the Chevrolet Colorado/GMC Canyon Crew Cab when equipped with the V6.

The Tacoma's ride can be best described as bouncy. This isn't the fault of the suspension which does a very good job of soaking up bumps. It is the fault of the separate frame and solid rear axle setup Toyota uses. The separation of body and frame means body motions are not fully kept in check. We found the bounciness would settle when a heavy load was in the bed. For most truck owners, this isn't a big deal. But if you are coming from a sedan or crossover, you'll won't be impressed.

There is an upside to the separate frame and solid rear axle setup; off-road capability. This allows the Tacoma to navigate through various obstacles such as logs or uneven terrain with no issue. Sadly we didn't get the chance to put this to test. What we were able to test was the Tacoma's four-wheel drive system thanks to a snow storm. On unplowed roads, the four-wheel drive system and Michelin off-road tires shrugged it off like it was nothing.

If you are planning to go off-road on a regular basis, then you should check out the TRD Off-Road trim. This adds a new off-road suspension with Bilstein shocks, meatier off-road tires, ‘Multi-Terrain Select' system that varies the traction control system for different conditions; and ‘Crawl Control' that operates the engine and brakes when you are dealing with some serious obstacles such as a steep hill decent.

Steering has some heft and feels precise, something you want if you planning to go off-road. Road and wind noise are kept to acceptable levels. 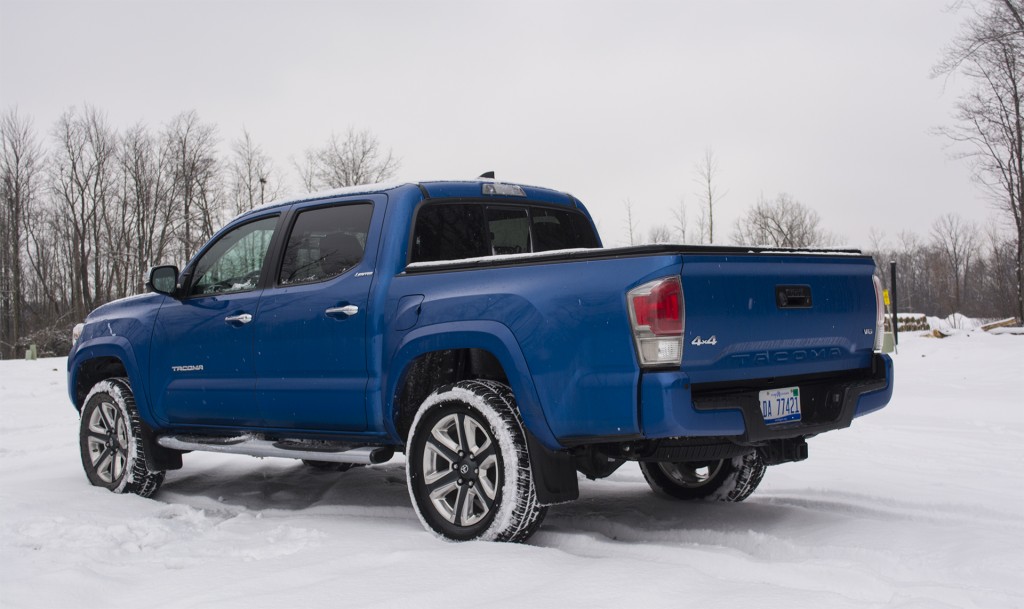 The 2016 Tacoma starts at $23,300 for the SR Access Cab with the four-cylinder and two-wheel drive. Our Tacoma Limited Double Cab with the V6 and four-wheel drive starts at $37,820. With a few options such as a V6 tow package and tonneau cover for the bed, our as-tested price ballooned to $41,024. For that same amount of money, you can get into a decently equipped full-size truck. But if you take the options out of the equation for a moment, the Tacoma Limited is a decent value. You get a number of features that are optional on lower trims such as dual-zone climate control, heated seats, navigation, and blind-spot monitoring. The only things you don't get are the off-road specific features found on the TRD Off-Road trim.

For most people, we would recommend going for the SR5 trim as it offers some level of customization in terms of options with a price tag that won't make you sad. Those who want to tackle the trails, give the TRD Off-Road a serious look. 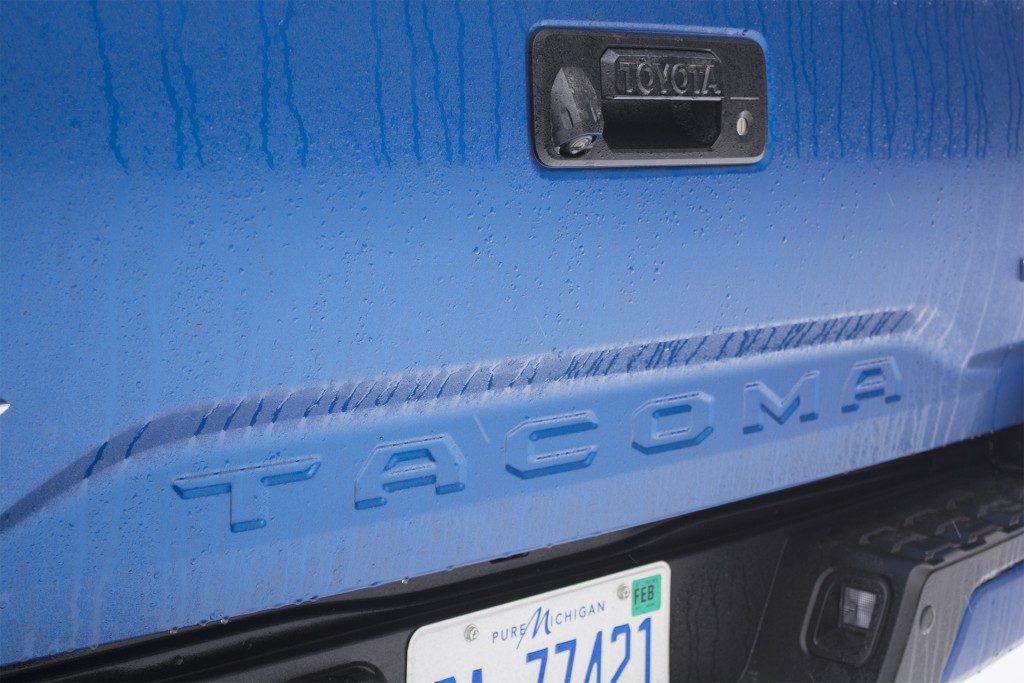 The Chevrolet Colorado and GMC Canyon shouldn't be discounted. The two trucks offer more interior space, smoother ride, and can tow slightly more than the Tacoma. There's also the option of a Duramax diesel engine which not only increases how much you can tow but also improves overall fuel economy. The Tacoma fights back with excellent resale value, punchier V6 engine, and feels more capable off-road. The Nissan Frontier is just as capable as the Tacoma, but it is below the Tacoma in terms of fuel economy and overall refinement.

You have two good choices in the midsize truck class with the Toyota Tacoma and Chevrolet Colorado/GMC Canyon. It just comes down what you are planning to do the most with it. If towing and carrying people around is at the top of your list, check out GM's midsize trucks. But if you want a truck that is very capable off-road and is proven to be reliable, then go look at the Tacoma.