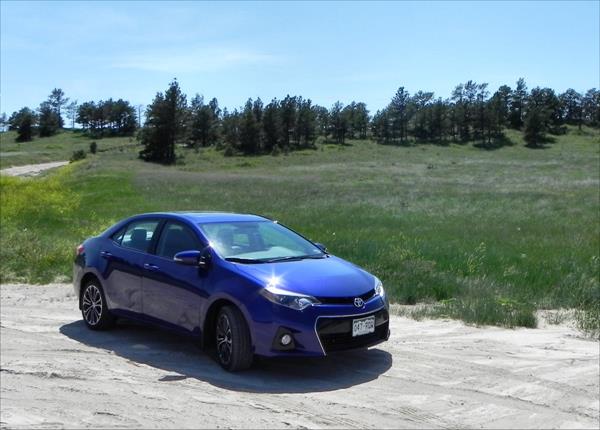 Overview (Final Score: A-)
The 2016 Toyota Corolla continues the Corolla tradition of delivering simplicity and comfort in a value-oriented package. This five-seat sedan may not win any beauty contests or take any checkered flags at the races, but it's got one of the most upscale interiors you'll find in the segment. Add in the extreme attention paid to ergonomics for the new Corolla and this car becomes a required entry on anyone's comparison list for cross-shopping the compact segment.

For 2016, the Corolla sees updates to its excellent Entune technology center and a new S Special Edition package. Through almost fifty years of sales, the Corolla continues to be a top choice today.


What We Loved About the 2016 Toyota Corolla


What We Didn't Love About the 2016 Toyota Corolla 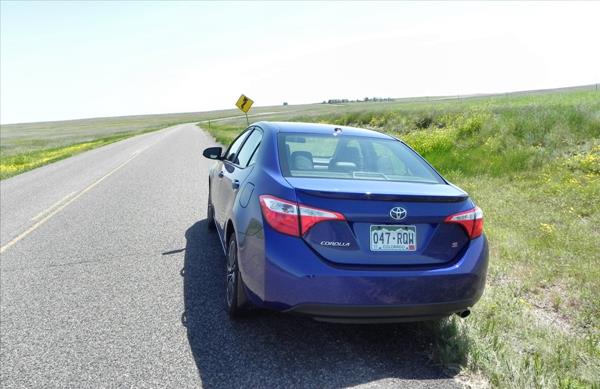 Exterior View (7/10 relative to market)
The 2016 Toyota Corolla is the second year of the 11th generation for the model and features some aggressive updates introduced in 2014. Through these updates, the Corolla has become more in line with its contemporaries in the compact car class. Yet few would point out the Corolla as a showstopper or standout in the crowd. Still, the car is not boring, just not exceptional to look at.

This formula for being good but not great in the looks department seems to be working for the Corolla, which has been a top-seller in its class for decades. A pointed nose marks the edge of a thin grille above a large intake below and creates the beginning of the low, sloped hoodline that continues almost unchanged through the low-raked windscreen. A coupe-like roofline and clipped rear deck finish the flow of the 2016 Corolla.

Along the sides, a character line follows a few inches below the beltline, broken only by the door handles, and an upward-sweeping lower cut completes the side panels. It's an aerodynamic, well-tuned look that is accented by tapered headlamps, sharp-cornered tail lights, and small wheels. 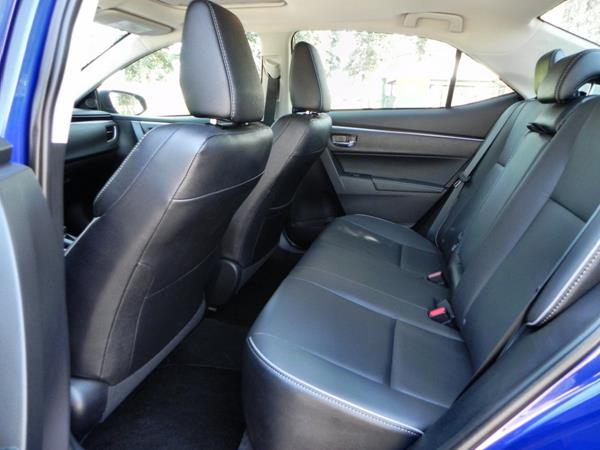 Interior Comfort, Quality, Ergonomics (9/10)
The most compelling argument for the 2016 Corolla is its very upscale interior. A high-lifted dashboard features multiple lines and tones, creating a, dare we say, elegant interior appearance. Unusually bold elements such as an asymmetrical shifter housing, sport-style three-spoke steering wheel, and curved bottom edges for vents and cutouts bring a more expensive look to the Corolla's interior experience.

Lower trim levels feature quality materials with smart seating that's comfortable for occupants of any size. The nested instrument cluster is more dynamic than might be expected and the large 6.1-inch touchscreen is a surprise at this price point. Everything is settled into an ergonomic layout that features plenty of fixed controls for no-brainer use of climate, stereo, and other day-to-day functions. Our only knock against the Corolla is the driver's position could use a little more adjustment in seating and steering to accommodate larger drivers.

Rear seat occupants will be pleasantly surprised at the amount of legroom offered in the 2016 Toyota Corolla and headroom is adequate for all but the tallest of riders. A hump-less rear floor means that even the center position is usable. Seating all around is well done in the Corolla.

Trunk space is not going to make any "best of" lists, but the wide, nearly flat opening means it's very usable at 13 cubic feet. 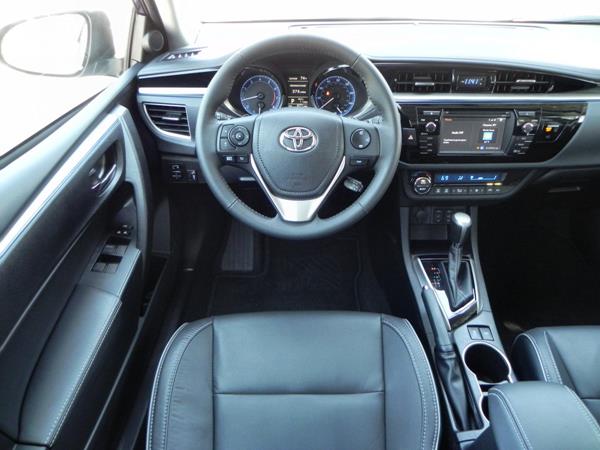 Technology (9/10)
The entry-level compact class is becoming very competitive in one arena: technology. Infotainment in many of the cars in this segment - which once rarely offered more than a basic stereo - has jumped into the 21st century with gusto. The Corolla keeps up with this trend, touting a 6.1-inch touchscreen as standard equipment and offering a growing list of options to that screen as the trim levels progress.

The touchscreen in the 2016 Corolla is of a good resolution with big, easy-to-touch buttons for the menu system. Features are good at the base level, with the now-expected things like Bluetooth connectivity, radio tuning, etc. being included. The Entune App Suite, available on most of the Corolla's trims, brings smartphone-connected apps and options that are more integrated than might be expected. If you opt for this upgrade, be sure to ask your dealer to help you set this up with your phone for a more seamless experience.

The app resides on your phone, but connects and allows services from Bing, Yelp, Facebook, and Pandora (among others) to be used from the touchscreen via your phone. Real-time traffic data for navigation, sports updates, and stock information are also streamed in.

Entune is a robust offering in this segment that has few rivals among the Corolla's peers. The initial setup can be onerous; the system's only downside. 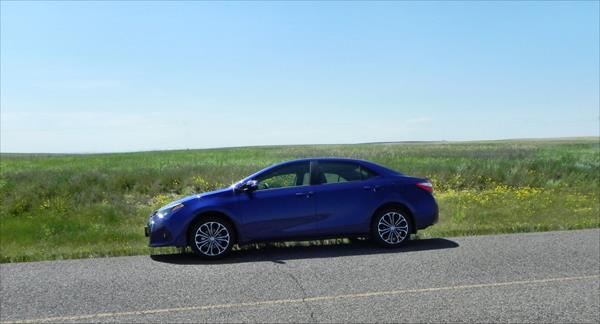 The other trims, equipped with a continuously variable transmission, return 32 mpg combined (29 city, 38 highway) with the exception of the S model, which lowers highway MPG to 37.

The most efficient Corolla is the LE Eco model whose engine tuning changes its EPA rating to 35 mpg combined (30 mpg city, 42 mpg highway), which drops to 34 mpg combined (30/40) in the slightly heavier Plus and Premium sub-trims.

In the real world, a tested Corolla S Premium with the CVT achieved 30 mpg combined in mixed driving conditions.


Predicted Reliability, Initial Quality Ratings (10/10)
Although it's too early, as of this publication, to give reliability ratings for this specific model year, the 2016 Toyota Corolla is virtually unchanged from the 2015 model. That model received very high rankings in reliability and had no safety recalls issued. J.D. Power and Associates gave the 2015 Corolla a rating of "Among the Best" in its Vehicle Dependability Study and we expect they'll do the same for 2016.


Safety (7/10)
Some rivals outclass the Corolla in crash testing, though this does not mean that the little car is "unsafe" in comparison. The National Highway Traffic Safety Administration (NHTSA) gave the 2016 Toyota Corolla an overall rating of five stars, with five for frontal and five for side-impact testing. It was given four stars for rollover.

The Insurance Institute for Highway Safety (IIHS) rates the 2016 Corolla with its top score of "Good" in most crash tests. The second-lowest score of "Marginal" was given, however, in the small-overlap frontal-offset test and for its ease of use with child safety seat anchoring.

The 2016 Corolla includes a host of safety equipment, including a full suite of standard fare such as airbags all around and daytime running lights. 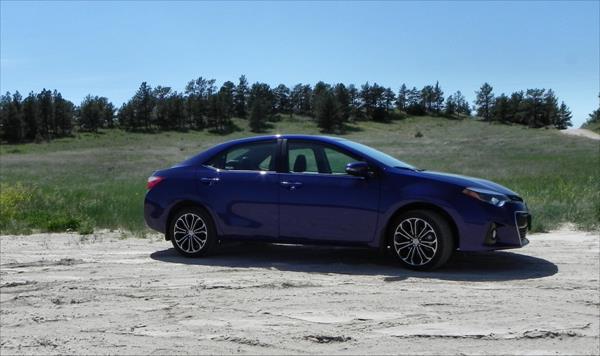 Performance (7/10)
The 2016 Toyota Corolla continues with the 1.8-liter four-cylinder engine that's powered this car for some time. This well-understood engine produces 132 horsepower and 128 pound-feet of torque in most Corolla models. The base Corolla L has a six-speed manual transmission as standard and a four-speed automatic as an option. All other trims, with the exception of the sport-focused S Plus, utilize a continuously variable transmission (CVT). The S Plus trim has a manual transmission option - the same six-speed found in the L. Finally, the Corolla LE Eco model has the same 1.8L engine, but it adds variable valve timing (VVT) which improves output to 140 hp while lowering torque to 126 lb-ft.

The 2016 Corolla is not going to win any checkered flags, but buyers in this market who're looking at this car probably aren't interested in racing. Instead, the Corolla delivers a solid A to B drive in most situations. We note that the CVT gets loud on the highway though road noise is better than many in this category.

The Corolla delivers a staid, comfortable, and content feel on the road. It's not fun to drive, nor is it particularly engaging. It is, however, solid and confident. This has long been the Corolla's hallmark and is one of the reasons it's been a best-seller in the compact car segment. For the most part, except in tight spaces, the Corolla drives bigger than it is, imparting a feeling of spaciousness and rolling comfort out on the road.


Pricing and Value (9/10)
The 2016 Toyota Corolla sells mainly in its two mid-point trims, the S and the LE. The base L model starts at about $17,000 and is really only for the budget-minded who care little about accoutrements. With the LE and S models, consumers will find excellent interior packaging and options are included at a price point that is realistic for small budgets. Most will stay under the $20,000 mark in those trims and will deliver an excellent suite of goodies that are hard to pass up.

The Corolla generally enjoys a better-than-average resale value and value retention, if taken care of, thanks to its reputation for longevity as a new and used car. This aids its value proposition down the line. Toyota also often offers discounts and incentives towards certain Corolla packages throughout the year, further helping its price point for consumers. 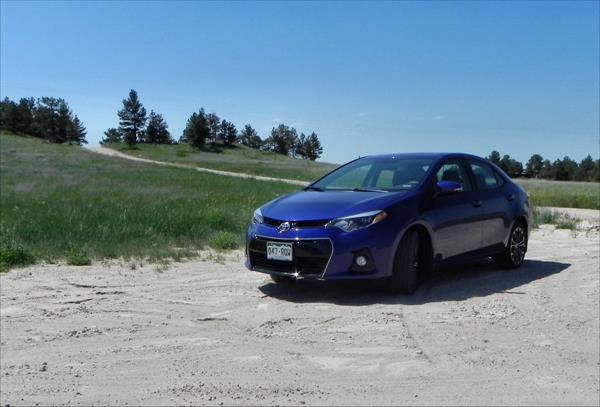 Total Score and Competitive Comparison (66/80, 82.5%)
The compact car segment is filled with excellent options as the market continues to thrive, despite low gasoline prices. Top picks here include the Mazda Mazda3, the Ford Focus, and the Honda Civic. Each of these has strengths against the Corolla and weaknesses to balance. All three are sportier, more fun-to-drive options in comparison, but will not deliver the same MPG or bang for the buck that the Corolla does.

Some might find it a surprise, but the closest contender to the Corolla, on those terms, may actually be the Hyundai Elantra, which has seen some marked improvements.

For the consumer looking for high value, low maintenance costs, and to skip the gas pump as often as possible, the 2016 Toyota Corolla delivers well. With a beautiful interior and no-nonsense approach to practicality, the Corolla is still a solid choice.