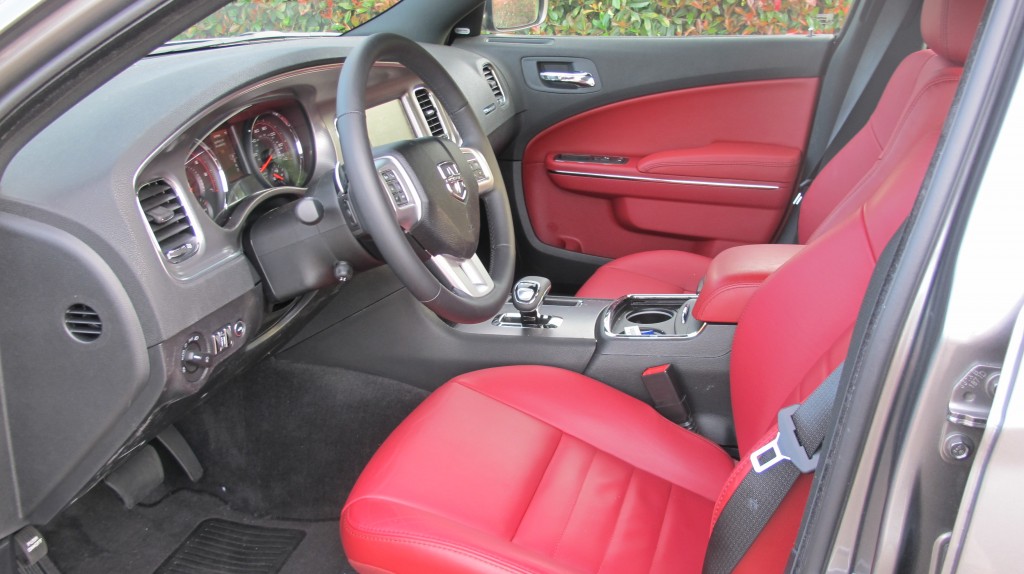 It can happen in just an instant and how you react to it can change your life forever. Every moment you spend driving in your car you run the risk of an accident happening right in front of you or as happened most oddly to us while road testing a 2014 Dodge Charger sedan with the new 3.6 liter V6 and 8-speed automatic—you can suddenly find yourself driving at 50 miles an hour with a piano sitting right in your path. Yes, we said a piano.

Apparently this piano fell off the back of a truck transporting it and somehow the driver didn't notice this heavy musical instrument falling off the back or the fact that it was now rolling on wheels towards oncoming traffic. In fact, it was rolling in our lane directly towards our brand new 2014 Dodge Charger. Thankfully, reflexes we were sure we had lost with our youth kicked in and we were able to swerve miraculously around the very large piano. But in the process our lives could have been put in danger by what was riding in the back seat—in this case our canine road tester Daisy Mae who with every car she rode in helped us learn which new models were most dog friendly.

Daisy Mae, who sadly passed away about four months after this near accident occurred, weighed a solid 80 pounds and during the mad power slide which ensued after we skidded safely past the piano she easily would have been hurled forward into the windshield had she not been wearing her safety restraint harness. She would have most likely been killed as could have the driver if she impacted the back of his head full force. But thankfully that day we had Daisy Mae safely buckled into a safety harness solidly and securely harnessed to the child seat attachment U-rings in the back. 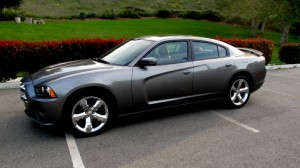 We want to thank not only the heroic handling capabilities of the exemplary 2014 Dodge Charger which helped us avoid the accident but also that canine safety harness. You put your kids in a car seat don't you? Why not buckle in your pet? Thanks to that restraint we enjoyed another four months with our precious canine auto journalist Daisy Mae Hamel. Our latest canine reviewer, a 4 year old named Roxy that we got from Boxer Rescue LA, is buckled now wherever she goes.

The 2014 Dodge Charger is, to our eyes, one sexy looking beast with more than a few of us finding that we now prefer its appearance to the more subdued look of the updated Chrysler 300C which shares the same platform. Our test vehicle came with a set of very cool 20-inch chromed alloy wheels that really helped to set off the mean dimensions of this full size family sedan all the while causing no discernible lapse in ride quality.

This sedan just exudes a macho cool that many guys and stylish tough girls will find appealing. It's almost as tough looking as a Ram pickup without going that far over the top. If you want understated class, consider the 300C but tough guy family sedan swagger is now owned by the 2014 Dodge Charger.

The cabin of our test Charger was not only surprisingly high quality in feel thanks to the sumptuous Nappa leather that covers all of the seats but thanks to clever ambient lighting and a non-stop, slasher movie red tone to the aforementioned seats, this Dodge felt anything but cheap or conventional. Although it now boasts a transmission shift lever that Audi may find very familiar, the inside of our Charger was otherwise very straight forward without coming across as anything less than upscale.

Are you a full bodied family of five that never packs light but doesn't do minivans? Not only does the back seat of the Charger offer plenty of stretch out room but it 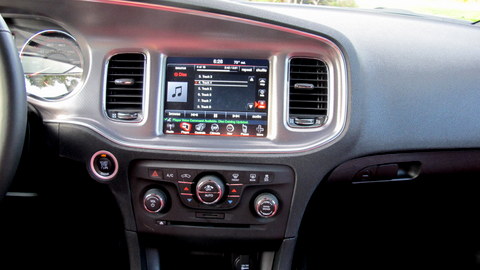 also boasts a handy and huge 15.4 square foot trunk. Other than that, the interior of the Charger is also chock full of cubbies, nooks and what was our personal favorite—heated and cooled front cupholders big enough to hold Double Gulps from 7-11 filled with Diet Coke.

Lastly, during long cruises we found the Charger stood out as one of the smoothest riding American cars we have driven over the long stretches of pothole ridden Southern California freeway tarmac. The shaking and jiggling we normally feel in most vehicles was absorbed by this vehicle's suspension with greater ease than Janis Joplin absorbed Jack Daniels while touring back in 1969.

Our test vehicle was a 2014 Dodge Charger SXT Plus model and its starting price was $28,495 with the 8-speed automatic coming along standard with the 3.6 liter Pentastar V6 offering up a very powerful feeling 292 horsepower. Thanks to the quick reaction times of that new transmission, for most people the V6 will suffice even while skipping the Hemi 5.7 liter V8 engine option which raises the numbers game to a semi-ridiculous 370 horsepower with 390 lb. feet of torque. The V8 does max out with a 25 mile per gallon EPA estimated highway average whereas our weeklong average in the convincingly fast V6 version was a very steady "real world" 25 miles per gallon (EPA estimates highway figures to be 31 miles per gallon).

Given what we have now repeatedly said about the 2014 Dodge Charger's emergency handling, steering and accelerating capabilities, must we repeat the same 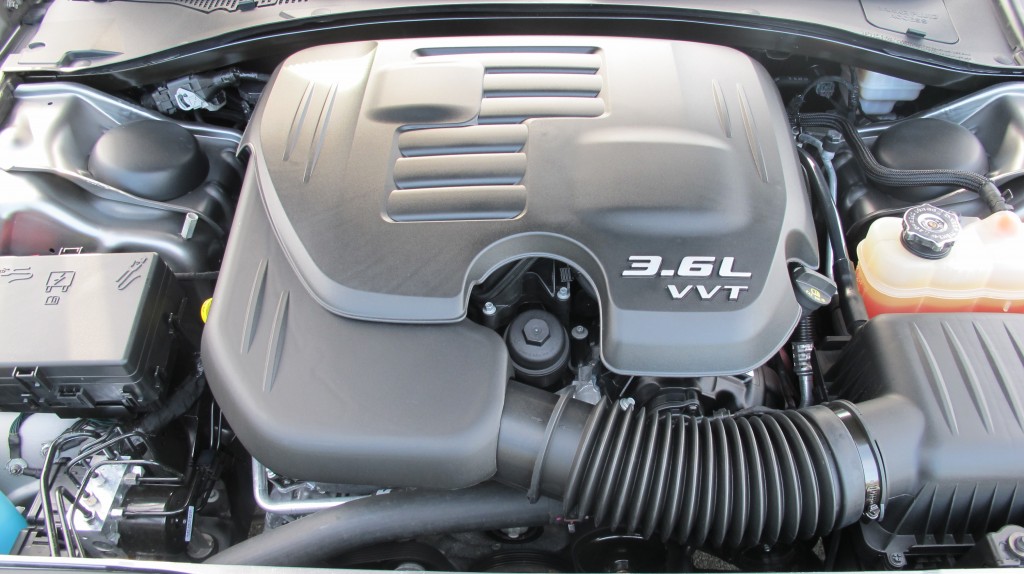 praises again here? Well, if you are the type of person who is less than sure about their ability to avoid pianos in the street, take heart knowing that this solid family sedan got a "Top Safety Pick" ranking from the IIHS (Insurance Institute for Highway Safety) as a result of performing so well in this year's round of crash tests.

Now, you know that this rear wheel drive and rather plus size family sedan has a sporty handling character and that its 3.6 liter 292 horsepower V6 is as impressively powerful as the V6 engines long used by Nissan in models like the Z and Maxima. Thankfully, however, Dodge did not saddle its V6 with a lumpen and moaning CVT (Continuously Variable Transmission) like Nissan usually does but rather is now using a totally new 8-speed automatic that we felt was one of the most responsive units we have tested without the aid of any double clutch technology. Best results with this new Dodge slushbox were apparent most especially when working the paddle shifters on the steering wheel with the gearbox in "Sport Mode."

The full size family sedan ranks are shrinking with rear drive offerings now pretty much non-existent since so many often turn to smaller and frankly more boring front drive sedan options like the Camry and Altima. But in this price range and general size class you can also check out the 2014 Ford Taurus which we have always liked and recent 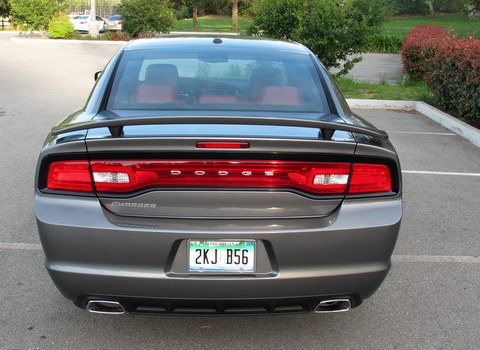 ly underwent a mid-life overhaul, the 2014 Buick LaCrosse or the all-new 2014 Toyota Avalon. The all new Chevy Impala, however, is the car we are driving right now and we highly recommend that you cross shop these two.

Is your pulse not exactly racing when presented with those options? Then the only real competition is from sister brand Chrysler whose 300 sedan may lack the visual menace of the Charger but makes up for it with more chrome flash for your cash. Still, we prefer the Charger and not just because it saved our lives. Okay, that may play a small part in it.

Should You Buy One?

To put it mildly, we were hugely impressed by the 2014 Dodge Charger SXT that we road tested and found it to be fun to drive, well built, reassuringly safe with an overall design swagger that marks it out as unique in its class. At the very least, it marks it out as a car that can totally pull off a red leather interior without making the owner look like he spends more time with his secretary or orthodontist than his actual children.

New for this year, of course, is the all-new 8-speed automatic that is truly a responsive gem with a character that can be either sporty or smooth depending on the driver's personal behavior when behind the wheel. Beyond just being grateful for its help in avoiding an ugly crash, we loved the 2014 Dodge Charger for its fun blend of power and sport mixed in with a healthy dose of luxury and style at a truly affordable price. It's not only a smart buy but the 2014 Dodge Charger is also a no brainer for anyone who loves rear wheel drive luxury sport sedans but can't afford Mercedes, BMW or Cadillac prices.

What we Didn't Love

Our test model was a 2014 Dodge Charger SXT with the 3.6 liter V6 engine and 8-speed automatic transmission. It suffered no fit and finish or quality issues and as we said earlier, it has terrific emergency handling characteristics. Thanks again Dodge.

This review is Dedicated to the Memory and Life of Our Canine Road Tester Daisy Mae Hamel. In her short life she rode in nearly 400 road test vehicles so we also would like to thank anyone who had to vacuum her fur out afterwards. 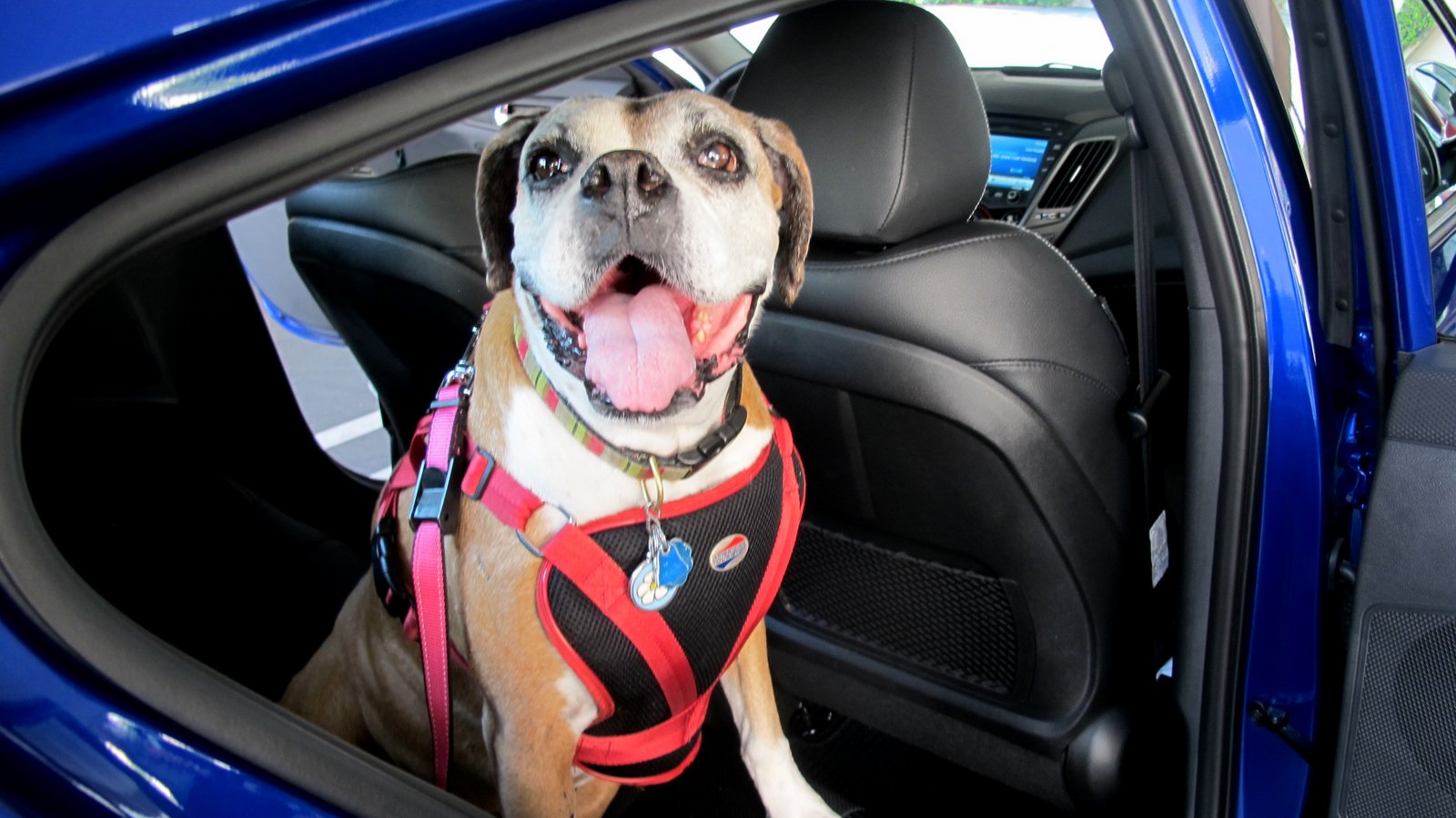