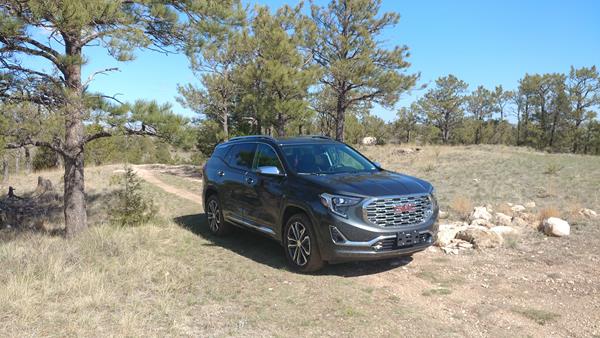 The 2019 GMC Terrain carries on with the ground-up redesign for a new-generation of the crossover that was introduced last year. Almost everything about the Terrain was improved, especially in driveability and comfort. Efficiency is also improved thanks to some lightweighting and downsizing, but not at the expense of passenger space or cargo room.

The 2019 Terrain has few rivals, as is the case with many GMC models, sitting somewhere in the premium-but-not-quite-luxury segment also occupied by sister company Buick. Compared to the lower-end model trims offered by rivals, the GMC Terrain will appear expensive, but when apples-to-apples comparisons are made between those rivals' upper trims and the Terrain, the point of the GMC brand will make sense.

The 2019 GMC Terrain deserves to be on more people's shopping lists for its excellence and higher value orientation than many might assume. The 2019 Terrain has three engine choices, four trim levels, and seating for up to five. 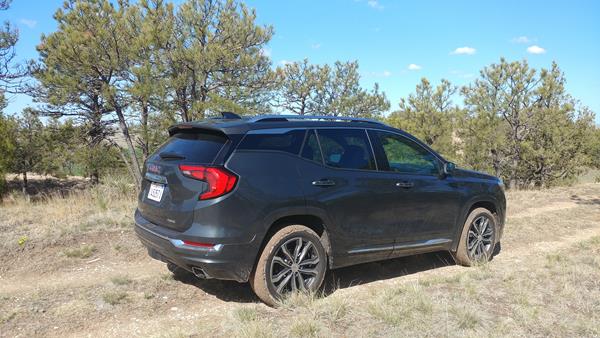 The exterior design of the 2019 GMC Terrain is definitely one of its strong points. Its flat-nosed front grille, squared-off fascia, and clipped hood design are furthered by near-square wheel wells. A sportiness is added, though, with the slightly leaning rear pillar, not-quite-flat roof line, and size proportions of the Terrain.

The front grille is smaller and less pronounced than it was in the previous generation, which deemphasizes some of the truck-like appearance of the previous Terrain. The raked windscreen and tapered roofline are nice touches and the blackened "floating roof" rear pillar is an upscale nod. A slight taper to the greenhouse helps emphasize the roof line's slant.

The overall look of the 2019 Terrain is strong, capable, and fast paced. This solidity and sportiness to the Terrain's design is promising and nicely done.

The Terrain has an upscale feel to its interior, which is commensurate with the GMC ideal. The new 2019 Terrain feels more sophisticated inside than did its predecessor. Unlike the often-compared Chevrolet Equinox, though, the Terrain is much more SUV-like and appealing for the upscale buyer.

Seating in the 2019 Terrain is spacious and comfortable. Leg and headroom are very good throughout the cabin and the interior experience overall is very good in the Terrain. Seating is also good for four with room for a fifth (center, back seat) if needed. Child safety seats are easy to install in the Terrain's backseat outboard positions as well.

Cargo space in the 2019 Terrain is a bit cramped compared to some rivals at 29.6 cubic feet with the rear seats up. Put them down and space expands to 63.3 cubic feet and we note that the rear bench folds flat too. A boon with the Terrain is the passenger's seat folding down, which drops flat when needed, adding a big addition for longer items that aren't accommodated in most segment rivals. That's a smart touch. 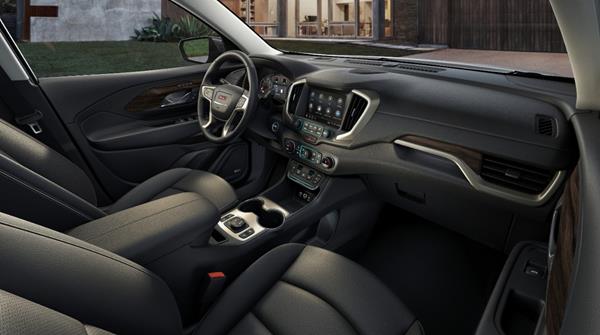 So although cargo space is not as good in all configurations as it might be in some others in the Terrain's segment, it's still useful enough that most probably won't notice and the added versatility of the front seat drop is a big bonus. Where we knock the 2019 GMC Terrain the most is in ergonomics and storage.

The 2019 Terrain has push-button shifting sitting along the console. This does little to free up any space compared to a more intuitive gear lever and requires that the driver look down to find the right button. Even after repeated use. The space left over ahead of the storage box at the center console accommodates two cup holders and a near-useless tray that will hold only smaller phones or an MP3 player. Most of today's smartphones likely outsize that container.

A nice touch, though, is the extra shelf on the passenger's side dash, which will accommodate most smartphones and can be used to house other things on the go as well, like keys or a wallet.

The IntelliLink infotainment in the 2019 GMC Terrain is excellent for infotainment. It's easy to use, responds quickly to inputs, and adds usable, useful apps. The standard infotainment screen in the Terrain is a 7-inch touchscreen with Bluetooth connectivity, Apple CarPlay, and Android Auto. Onstar 4G LTE with built-in WiFi and four USB ports are also included, as is GMC's Teen Driver for limiting the vehicle's capabilities when a teenager is at the helm.

The 8-inch upgrade screen adds more USB ports as well as HD and satellite radio and navigation. A wireless charging pad is also available as an option with the Bose stereo upgrade. The added functionality of IntelliLink is nice and useful. We like the ease of navigation and the way the voice controls can often figure out what you're after if you aren't sure of its exact name.

We drove the upgraded gasoline option this year and found it returned an average of 24 mpg overall, meeting its EPA expectations. 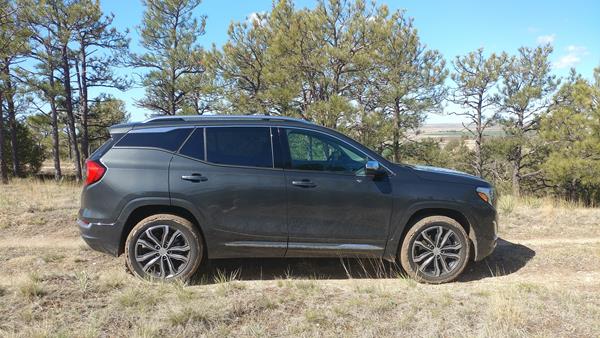 The 2019 model year Terrain has not yet been assessed for reliability by the J.D. Power and Associates Vehicle Dependability Study nor has reliability been surveyed by Consumer Reports. The JDP study gave the 2018 model year Terrain (mechanically identical to this year) a "Better Than Most" rating and we expect that will carry on for 2019. As of this writing, there have been no recalls for the 2019 Terrain.

The 2019 GMC Terrain has received an overall 5-Star crash test rating from the National Highway Traffic Safety Administration (NHTSA). This includes five stars each for frontal and side crash results and four stars for rollover results.

As of this writing, the Insurance Institute for Highway Safety (IIHS) has not yet published crash test results for the 2019 Terrain, but the identical 2018 model received top scores of "Good" across the board from the IIHS results last year. It also received a Superior rating for its crash prevention technologies.

There are three engine options for the 2019 GMC Terrain, starting with the base model's 1.5-liter four-cylinder. This engine outputs 170 horsepower to a nine-speed automatic transmission with front-wheel drive. This engine remains standard in the the first three trim levels (SL, SLE, SLT). It performs well enough for the Terrain, but lacks any confidence in its get-go.

The upgrade engine is a 2.0-liter turbocharged four-cylinder that offers 252 horsepower with the same nine-speed automatic. This engine is a much better fit for the Terrain and is an option in the SLE and SLT trims and standard in the Denali trim. Both front-wheel and all-wheel drive are available. We greatly enjoyed the way the 2.0L motivates the 2019 GMC Terrain and it feels to be a perfect fit for the rig.

The other option is a rather expensive upgrade to a turbodiesel engine. This 1.6-liter four-cylinder pushes only 137 horsepower into a six-speed automatic transmission, but offers a lot more torque to compensate. That torque delivery means faster acceleration once the turbocharging kicks in and better highway fuel economy. The diesel is optional in only the SLE and SLT trims.

Regardless of engine and transmission, the 2019 Terrain does very well for itself in terms of maneuverability and capability on the road. Most everyday driving is easy in the Terrain and the clipped-edge nature of its design means both good visibility and an easy sense of where the edges are for tight space maneuvering. The GMC Terrain is very quiet on the highway and handles iffy weather and light off-road well in its AWD configurations.

The upscale value in the 2019 GMC Terrain makes the value proposition seem lower than it would be were apples being compared straight across. Its higher base price compared to lower-end rivals is confusing, but the inclusions given with the Terrain and its solid performance across all of our metrics means that this is a much higher value return than most might think.

We'd recommend going to the mid-tier with the SLE or SLT models to get the most bang for the buck. The diesel engine might seem tempting, but it's pretty pricey to get and pushes the price of the SLT into the realm of the Denali trim, which has a traditionally higher resale value. So the tradeoff might not be worth it. Unless fuel economy is a must. 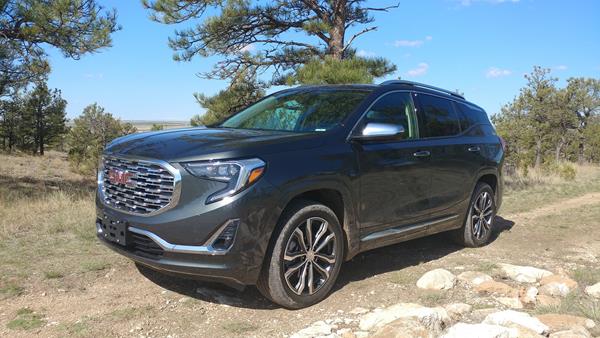 Rivals for the 2019 GMC Terrain are fewer than most might expect. The GMC is a premium level vehicle, so it's only direct competitor is from sister company Buick with the Envision. We'd recommend cross-shopping closely, though the Terrain's exterior appeal might be the deal breaker there. Other options are in the upper trim levels of the Toyota RAV4, Hyundai Tucson, Ford Escape, and Chevrolet Equinox. The RAV4 is more expensive when a direct comparison is made apples-to-apples, as is the Equinox. The Tucson is similarly overpriced by comparing to the same equipment in the Terrain, as is the Ford Escape. Which explains the entire point of the GMC brand and its placement on the market.

The 2019 GMC Terrain is a phenomenally well-done crossover in the five-seat segment. We like the size, upscale appeal, strong curb presence, and excellent overall value offered in this premium-level ride.