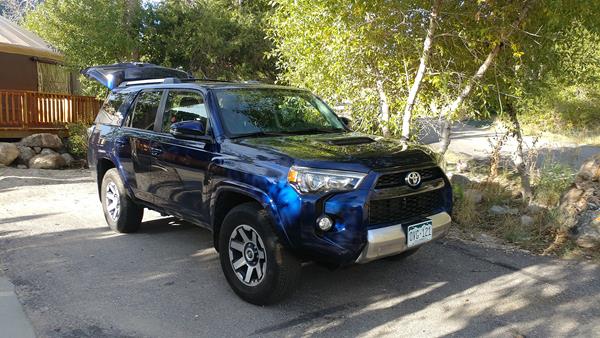 The Toyota 4Runner is a traditional body-on-frame sport utility, which has its appeal and drawbacks. Among modern crossovers and SUVs, the 4Runner stacks up differently depending on its trim point and purpose. As a truck with extra seats and an all-terrain vehicle, the 4Runner shines. But as a daily driver and family hauler, not so much.

The 2017 Toyota 4Runner carries over largely unchanged from the 2016 model. A couple of trim point name changes - the Trail and Trail Premium are now the TRD Off-Road and TRD Off-Road Premium, respectively - are about all that's new this year.

There are six trim levels for the 2017 4Runner, starting with the base model SR5 and moving up to the TRD Pro and Limited models. They all use the same engine and transmission, and can tow up to 5,000 pounds. Two of the trim points are available as rear-wheel drive SUVs, while all others are four-wheel drive only. Seating for up to seven is available in some trim points.

What we learned is that there are few options as astute off the road as the 4Runner, but for daily commuting, road tripping and family hauling, the 4Runner leaves a lot to be desired. 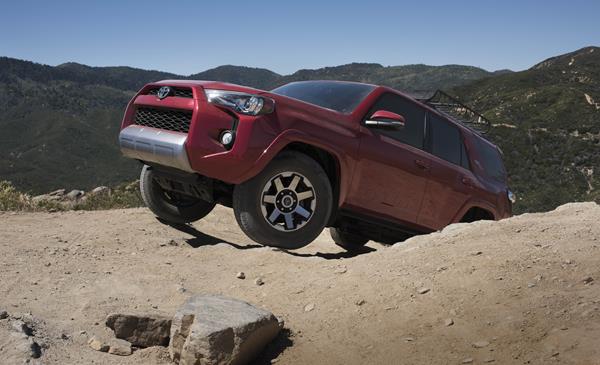 The exterior of the 2017 4Runner is based largely on the Tacoma pickup truck with which it shares many things. Major differences are found in the front fascia and rear quarter. We think those differences improve the looks of the 4Runner compared to the much more polarizing Tacoma.

The 2017 Toyota 4Runner has a strong, truck-like, powerful fascia with a wide intake gap and highly accented approach angle beneath. Lighting is heavy and protruding, and the hood is flat and powerful. The fenders are integrated well into the fascia for a more muscular appearance, and the multitude of angles and edges present on the 4Runner's face makes for an intimidating effect.

Along the sides, the bodywork is relatively simple by comparison, with few lines. What lines do appear are there to accent the front and rear fenders as seen side-on, with angular edges and dimples. The roofline is flat and long, and is mimicked by a long, flat greenhouse edge both above and at the beltline. The windows are sharp edged and large.

Somewhat trapezoidal wheel wells create large gaps between themselves and the beefy tires mounted beneath. The rear hatch is relatively flat, with accent on the large bumper below and the spoiler above.

The overall impression of the 2017 4Runner is one of muscle and capability, with plenty of ground clearance and suspension to go off pavement at will. 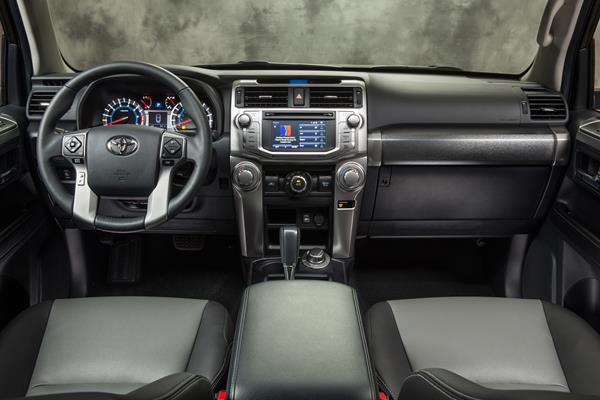 The interior of the 2017 Toyota 4Runner is functional and strong, keeping the design motif of the exterior. Hard plastics and heavy looks are the main tools used to keep this affect in the 4Runner's cabin. That may put off some buyers.

Seating comfort in the 2017 4Runner is good, with comfortable front-row seating and plenty of adjustment for the driver, even in the base model. Tilt-telescoping steering and other standards in this SUV help that along. The cloth seats that come in the lower trims is very good and robust, while the leatherette or leather in most other trims is nicely stain resistant and comfortable. Driver's controls and dashboard buttons are easy to access and large.

The second row of seating is a plain, but very useful bench. Seating three across is doable there, though three child safety seats will become a struggle for seatbelt dominance. The outboard seats in the second row are very comfortable and useful. Some upper trims offer seat tilt in the second row as well, aiding comfort on long drives.

The optional third rows, available in the SR5 and Limited trims, is cramped and small, aimed entirely at children, but boosts seating capacity up to seven.

Cargo space in the 2017 Toyota 4Runner is very good. The optional third row leaves 9 cubic feet behind it for storage, and when that's folded down or not opted for, the rear cargo space becomes a cavernous 47.2 cubes. Folding down the second row expands cargo space to 89.7 cubic feet. It does take some practice to get those second-row seats to fold completely flat.

Cargo space is highly accessible thanks to a standard sliding rear window inside the wide-opening liftgate. This is handy for quick grocery loading or stuffing in last-minute items over the top of an already-full cargo area floor. An optional pull-out cargo deck that slides over the bumper and holds up to 440 pounds is available on all 4Runner models without a third row.

Storage throughout the 4Runner is well done with plenty of gadget and small-item storage to be found. Drink holders are likewise plentiful. 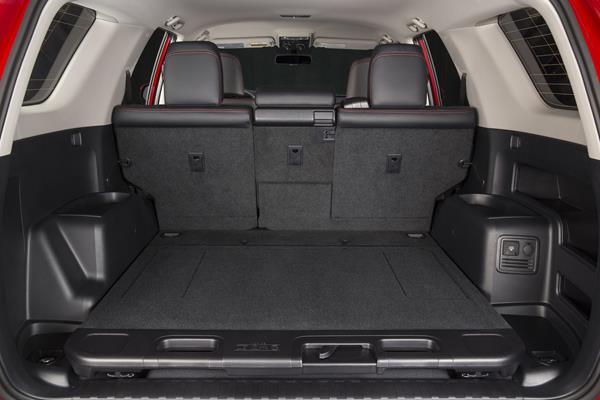 Technology in the 2017 4Runner focuses on the Entune infotainment system. At its base level, this infotainment system is a 6.1-inch touchscreen with voice-recognition, a rearview camera, USB port and Bluetooth connectivity. We like the interesting GPS Link app in this system that allows your smartphone to provide GPS for navigation without adding the nav upgrade.

The upgraded system is a slightly larger screen with more apps and built-in navigation. This Entune Premium setup is more conducive to longer-distance and daily use, adding smartphone apps like Pandora and Yelp to the mix.

We like the large virtual buttons that Entune uses and its ease of use for basic tasks. It is not a terribly sophisticated infotainment interface as it appears in the 4Runner. Some options like Android Auto and Apple CarPlay are not found at all and others require some digging to locate.

In the real world, all of the models we drove were four-wheel drive and none of them achieved the EPA estimates in daily use. Our average in the 4Runner TRD Off-Road Premium was only 16.5 mpg overall and our average in the Limited model was just shy of 18 mpg overall. Due to the short duration of our drives in the SR5 and TRD Pro models, we did not take mpg averages. 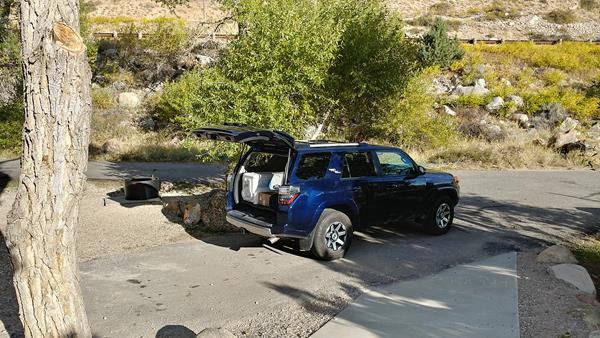 Although the Toyota brand enjoys a reputation for good reliability, the 2017 4Runner may not match that expectation. The J.D. Power and Associates Vehicle Dependability Study ranks the 4Runner at just "About Average" with its survey and there have been two safety recalls on the 2017 model thus far.

The current generation of the 4Runner has had this same result since its introduction.

The 2017 Toyota 4Runner has gone through complete crash testing by both the National Highway Traffic Safety Administration (NHTSA) and the Insurance Institute for Highway Safety (IIHS).

Under the 2017 Toyota 4Runner's hood is a well-done 4.0-liter V6 that outputs 270 horsepower and 278 pound-feet of torque. A five-speed automatic transmission is standard equipment. Some models feature four-wheel drive as either an option or as standard, while others have four-wheel drive with a low-geared transfer case for more powerful digging.

We would like to see a better transmission offered for the 4Runner, as much of what's likely holding it back is that five-speed auto. Fuel economy can be almost directly blamed on it and most of the noise heard in the cabin, while driving comes from it as well. Acceleration is also spongy thanks to that transmission's limited shift options.

On the road the 2017 4Runner is not very comfortable compared to most of its contemporaries. The ride is a bit spongy, the power delivery from the drivetrain is sluggish, and the road noise is relatively high. Some of these improve with some trim points, with the ride improving a bit with the Limited trim and the road noise lowering in non-offroad-centric models like the SR5s and Limited.

Off the road the story is very different. The off-pavement ready models with the TRD designation are all very astute in the dirt and on hills. The TRD Pro model is the best of these, with its greatly upgraded rock climbing gear and prowess. The SR5 4x4 models offer good bang for the buck if occasional weekending through rough terrain are your thing, but the SR5, SR5 Premium and Limited models all suffer from a lack of grip when one wheel comes off the ground.

Most of our performance measure here is with off-pavement activity, as that's what the 4Runner is primarily designed for. And for that we give this SUV some high props for its capability off the shelf.

The value proposition of the 2017 4Runner will depending largely on the purpose the buyer has for it and which trim point is chosen. The 4Runner has an above average resale value in its favor, but low fuel economy and poor daily use performance hamper it.

We recommend the base model SR5 or SR5 Premium for their low cost of entry and good return as off-road-ready machines that don't have many frills. The TRD Off-Road Premium is also a good value for the serious off-roader who wants a comfortable ride and plenty of amenities as part of the bargain. We recommend shying away from the Limited trim for its high cost and low return. 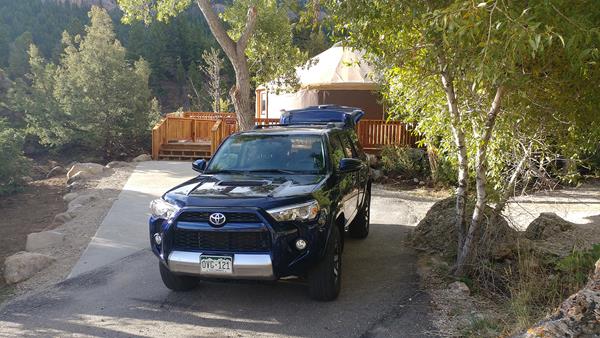 For comparative off-road credibility, the 2017 Toyota 4Runner should be compared to the Jeep Grand Cherokee, Chevrolet Traverse and GMC Acadia. But the 4Runner is not as family-friendly or comfortable on the road as the others. That said, the 4Runner is the only truck-based sport utility and its ride height and ground clearance are superior for that.

Other competitors in the crossover realm are plentiful, including the Toyota Highlander and the Dodge Durango. Both are far better family haulers than the 4Runner, but neither can compare for off-pavement capability.

The 2017 Toyota 4Runner is a strong off-road performer with a good value proposition in the trim levels geared toward that end. It sacrifices fuel economy and ergonomics for that though, which may not be what some buyers want.