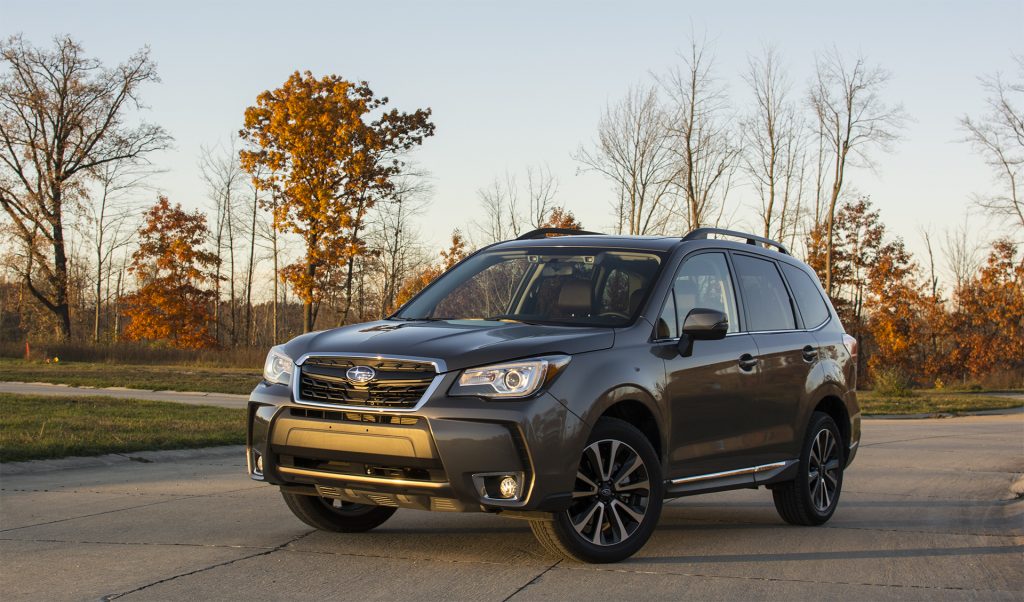 It seems every automaker is either selling or getting ready to launch a compact crossover. But flashback 20 years ago and compact crossovers, or compact SUVs, weren't really a thing. The Suzuki Sidekick and Geo Tracker were the only choices around. But this changed in the 1996 model when Toyota introduced the funky RAV4. This would be followed by the Honda CR-V and Subaru Forester a year later. These three models are seen as the Patient Zeros of what would become the compact crossover class. These three models are constantly at the top of sales charts for their respective automakers and are likely the first choice for many consumers.

Recently, Toyota has introduced a refreshed version of RAV4 and Honda announced an updated CR-V. To combat both of these, Subaru has revitalized the Forester for 2017 with numerous changes inside and out to keep it ahead. Do they make a difference?


What We Love About the 2017 Subaru Forester:


What We Don't Love About the 2017 Subaru Forester: 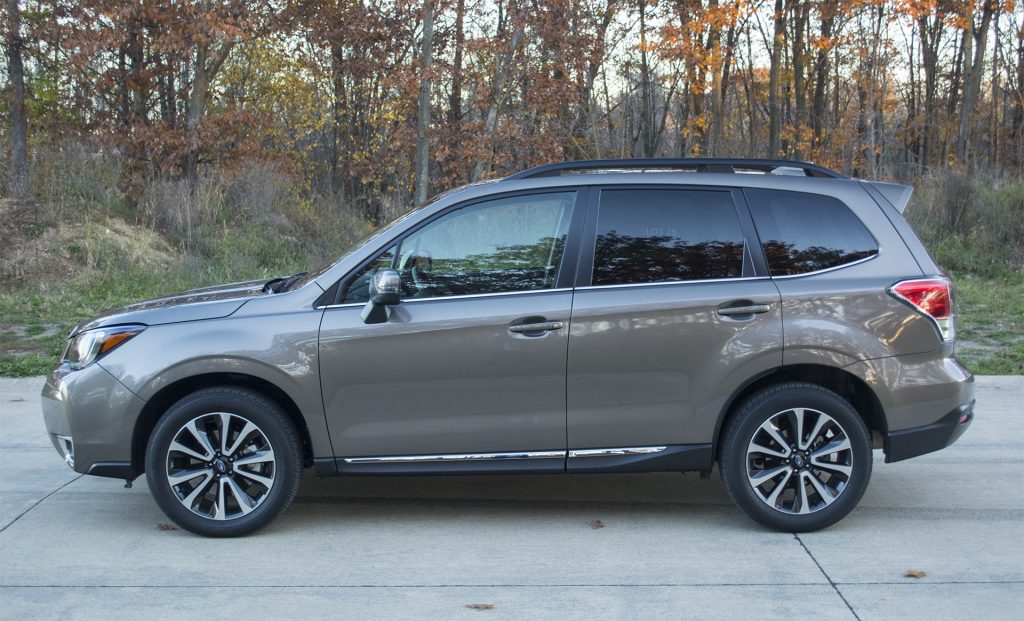 The Forester has never been at the forefront of crossover design. It is a basic box shape that the Forester has retained since it was first introduced back in the mid-90s. There are some changes for the 2017 model, but you'll need a keen eye and the 2016 model next to you to see differences. There is reshaped grille, LED accents for the head and taillights, and new wheels. XT models like the one we reviewed get a more aggressive front bumper and 18-inch wheels.

If there is one positive to the Forester's design, it has to be the large area of glass. This allows for the Forester to excellent all-around visibility and makes the interior feel larger than it is. 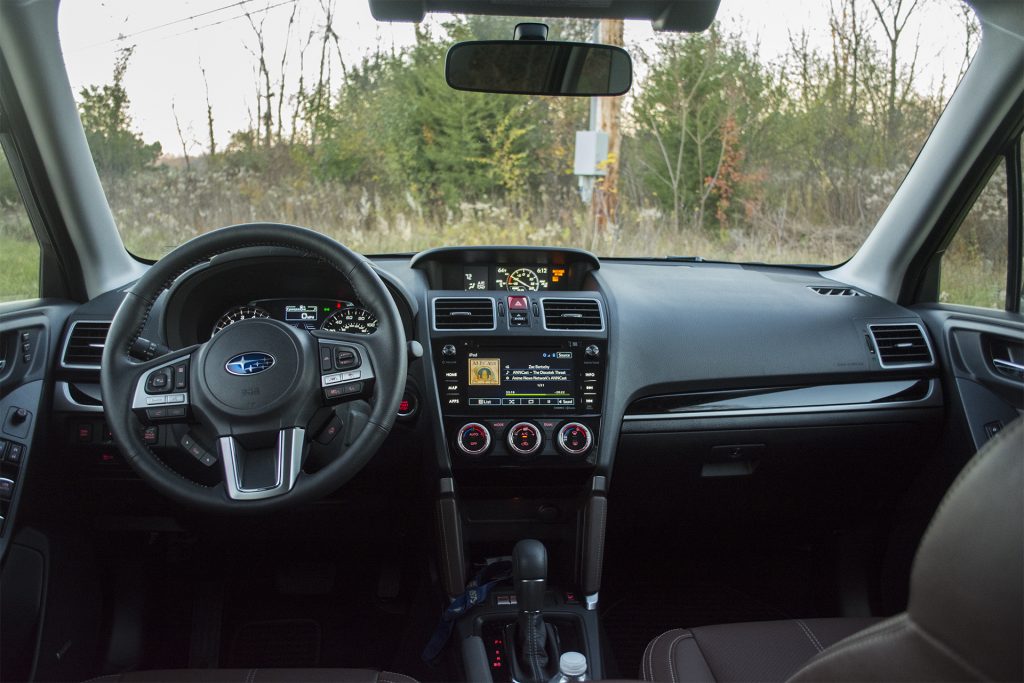 Function over form describes the interior design of the 2017 Forester. That isn't to say the model is lacking in features or comfort. But compared with its contemporaries, the Forester's interior looks and feels somewhat bland. A lot of the materials used in the Forester were chosen for durability and not for how nice they feel to touch. Subaru should be given some credit for at least trying to make the Forester slightly more premium with the option of brown leather on the top XT Touring. Bits of it are used on the door panels and dash. But taking into account how much the XT Touring costs, Subaru should have done more to make it feel more premium.

Passenger space is quite generous for those sitting either in the front or back. The driver's seat in the XT Touring features 10-way power adjustments and two memory settings, while the passenger seat makes do with manual adjustments. The seats are ok for short trips, but some will be wishing for a bit more back and thigh support on longer trips.

Passengers in the rear sit a little bit higher than those in the front to give them a better view of the road. If you're worried this means headroom is lost, don't. The Forester offers one of the largest rear seats in the class with loads of head and legroom. Those taller than six feet will not feel constrained back here, even with the optional panoramic sunroof.

The sunroof plays a role in how much cargo space the Forester offers. Models that come with the sunroof have 31.5 cubic feet of space with the rear seats up and 68.5 cubic feet when folded. Opt for a model without a sunroof and space increases to 34.4 and 74.7 respectively. 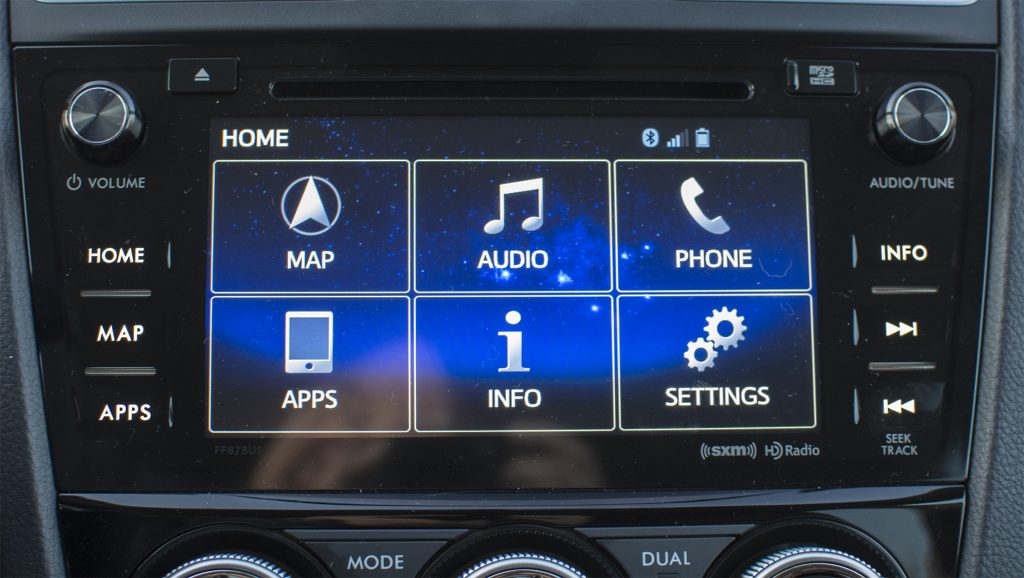 All Foresters come with Subaru's Starlink infotainment system. Most models will feature it on a 6.5-inch screen, while our tester came with the optional 7-inch screen. Starlink is a vast improvement over Subaru's old infotainment system in terms of ease of use and overall performance. The interface is easy to wrap your head around thanks to an intuitive interface with large touchscreen buttons. There are gesture controls for the navigation system, but this more of a gimmick than something of value.

Starlink offers integration with various smartphone apps such Aha Radio, iHeartRadio, and Pandora. You can also project your smartphone through Starlink via MirrorLink. Android Auto and Apple CarPlay integration aren't available at this time.

The 2.0XT model offers a lot of performance but at the cost of fuel economy. The EPA says the Forester 2.0XT will return 23 City/27 Highway/25 Combined. Our week of driving returned an average of 24.7 mpg with a 50/50 mix of city and highway driving. If you want to eek out more mpgs, then you should check out the Forester 2.5i which has EPA ratings of 26/32/28. 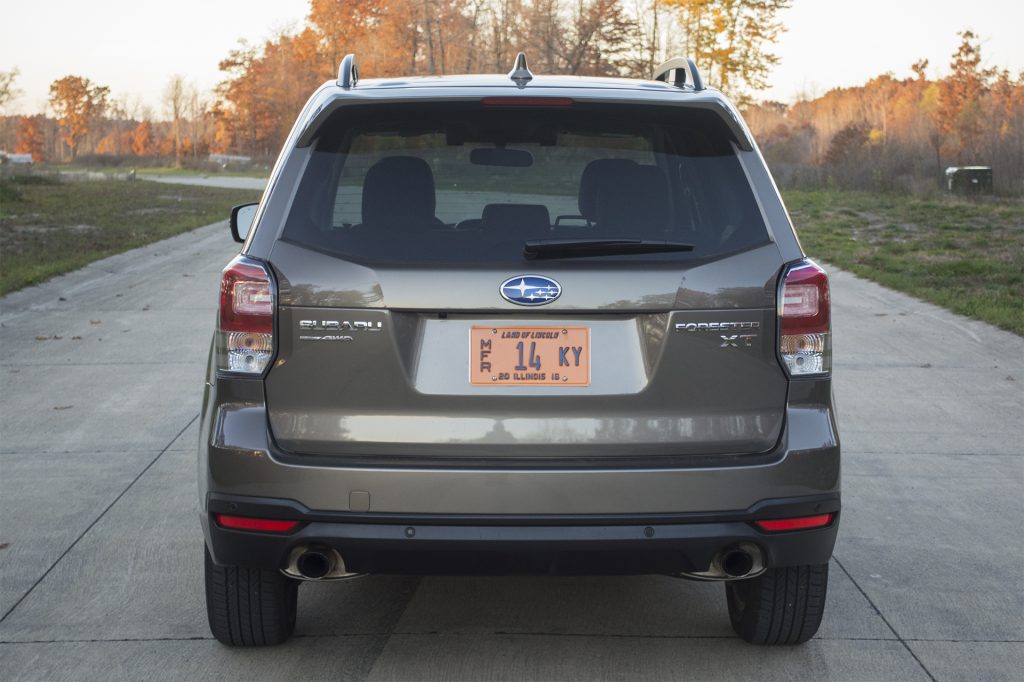 Since the 2017 Subaru Forester has only been on sale for a short time, we don't have reliability data to report on. But drawing on information from previous years of the Forester, we're guessing it will be slightly above average. J.D. Power says the Forester is "Average" in terms of reliability, while Consumer Reports gave the model top marks. The Forester didn't do so great in J.D. Power's Initial Quality Study, as it rated slightly below average.

Subaru has filled the Forester to the brim with safety equipment. All models feature a full suite of airbags, backup camera, anti-lock brakes, traction control and stability control. Models equipped with the CVT will get an upgraded traction control system known as X-Mode that allows the Forester to handle difficult off-road situations. Most Foresters will come with Subaru's Starlink Safety and Security telematics system that includes automatic emergency notification in the event of a crash, emergency assistance, remote door unlocking, stolen vehicle recovery and more.

Optional on most Foresters is Subaru's EyeSight system. EyeSight uses two cameras mounted toward the top of the windshield to scan the road ahead. Data gathered by the cameras are fed to various active safety systems such as adaptive cruise control, lane departure warning, lane keep assist, and forward collision warning and mitigation. For 2017, Subaru has upgraded the cameras to a set of color ones that are said to improve how far the system can monitor the road and better recognize certain items better such as a vehicle's stop lights.

The Forester's safety record is excellent. The National Highway Traffic Safety Association (NHTSA) awarded the model with a 5-star overall rating. Over at the Insurance Institute for Highway Safety, the Forester has its highest honor of Top Safety Pick+. 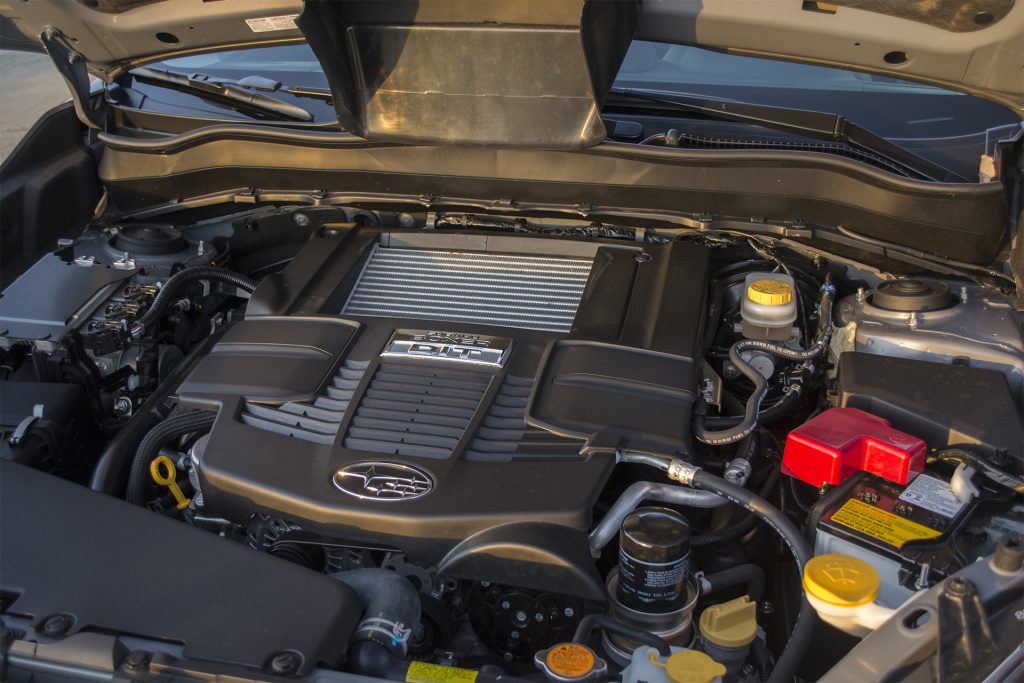 The Forester is available with two engines. Most will feature a 2.5L boxer-four producing 170 horsepower and 174 pound-feet of torque. This comes paired with either a 6-speed manual or CVT. 2.0XT models come with a turbocharged 2.0L boxer-four with 250 horsepower and 258 pound-feet of torque. This only comes with a CVT. Either engine features all-wheel drive standard.

We had the 2.0XT Touring with the turbocharged four and it makes the Forester fly. It takes a moment for the turbo to spool up, leaving you wondering where is the oomph. But once it gets going, power comes on rapidly and smoothly. The run to 60 mph takes around 6.5 seconds, making it one of the quickest models in the class. Subaru wisely added simulated gear changes to the CVT to fool most owners into thinking they are driving a regular automatic, and this works very well.

Before you start thinking that Subaru has done some other tweaks to the Forester 2.0XT to make it fun to drive, they haven't. A tall ride height and steering that is over-boosted do not make for a fun to drive vehicle. The daily drive is where the Forester shines as the suspension is able to soak up most bumps. Subaru has also addressed one of the key weaknesses of previous Foresters: noise isolation. Compared with older Foresters, the 2017 model shows a significant improvement in how little wind and road noise comes inside.

Depending on the trim, the Forester can either be one of the best values in the compact crossover class or not. Our 2.0XT Touring tester sits on top of the Forester lineup and comes with a base price of $34,295. For that price, you get a large amount equipment such as 18-inch wheels, dual-zone climate control, 7-inch touchscreen, Harman/Kardon audio system, power tailgate, and heated steering wheel.

Our test vehicle featured an option package that adds navigation, EyeSight system, swiveling headlights, and automatic headlights. That brings the final price to $36,765. For that price, the Forester 2.0XT Touring isn't worth it. There is a lower cost turbo model, the 2.0XT Premium which begins at $29,295. But there is no way to option EyeSight on this trim.

For most people, we would recommend the 2.5i Premium which starts at $25,495 and to equip the EyeSight package. This model will give you everything you need and then some. 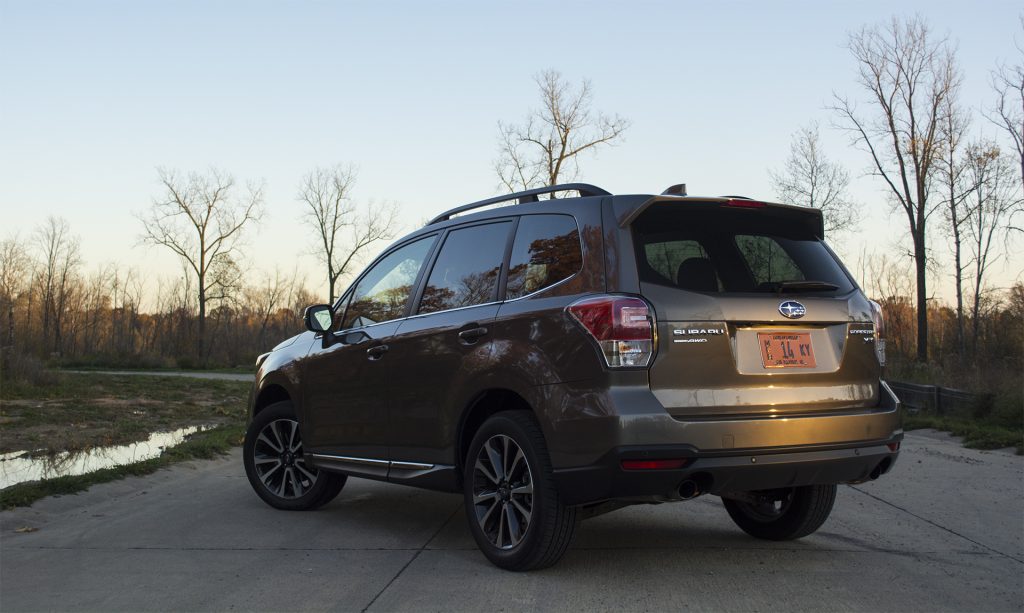 There is an abundance of small crossovers and each one has its strong points. The Ford Escape is one of the sharpest looking and most premium feeling models on sales. Mazda's CX-5 is loved by many for its surprising handling characteristics. The Hyundai Tucson brings a lot of features with a moderate price tag. Then there is recently announced 2017 Honda CR-V, which brings a new turbocharged engine along with an impressive set of safety features.

The 2017 Subaru Forester has a lot good points. It is one of the most spacious crossovers in the class for passengers and cargo. The turbo engine helps the Forester fly away from the pack. Plus, Subaru has been addressing some of the weak points of the Forester

- the infotainment system and noise isolation. But the turbo model also gives the Forester some problems it cannot overcome such as an exorbitant price tag and not feeling that it is worth the price.

Most should go with one of the 2.5i models, as it offers the sweet spot of feature availability and value. But if you have your heart set on a Forester turbo, wait till the 2017 models start hitting the used car lots when it might become a slightly better value.