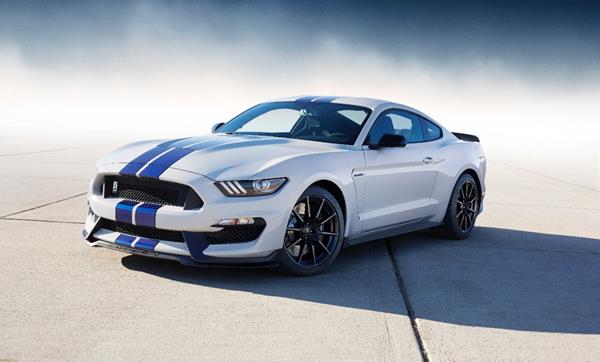 The 2017 Mustang mixes today's expectations of a sports coupe with the nostalgia of the most-storied Ford vehicle. The Mustang was redesigned in 2015 as a more modern rendition of this classic, adding key elements that brought it into more competitive sports car territory. Its exterior and interior design pay homage to its past, making sure that the Mustang continues to be the pony car that named the category.

The 2017 Ford Mustang is a 2+2 coupe, or convertible offered with three engine options, two transmission choices and three main trim levels along with several sub-trims to match. Engine choice determines the major trim level, while sub-trims are named for their package additions, whether interior upgrades or chassis changes.

The wide range of choices and varying options for affordability are key components to the Ford Mustang's success. A low-cost base level 2017 Mustang can be purchased without much financial sacrifice, while performance-oriented, hardcore GT models can be had with a wealth of sports or luxury options. 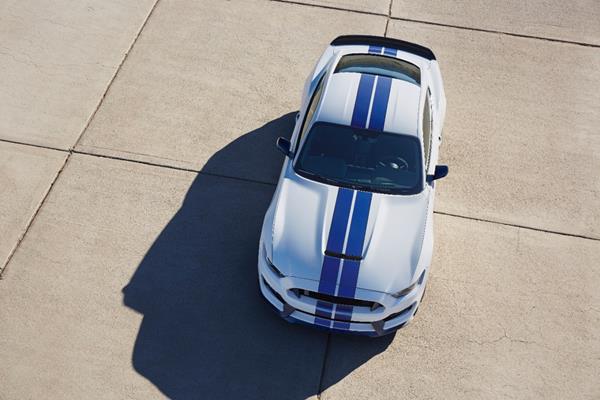 The exterior of the 2017 Ford Mustang keeps the appeal that made it popular when it first appeared in 1964, while catering to the contemporary expectations of today's buyers. The front grille and fascia are all new-generation Ford, but the coupe's bodywork and headlamp curves are all about the 1960s. It's a great meld of nostalgia and modern appeal.

A strong curve on the hood's lip flattens out to make for a Mustang-styled hoodline with twin tunnels along either side to accent the fenders to either side. Angular bezels and rounded points remind us of the Mustang's heritage.

Low front fenders with slight bulges are only slightly set off from the hood above. The speed lines of the Mustangs of old emerge from those narrow front fenders to carry along the upper and lower parts of the bodywork. These terminate at the large, muscular rear fenders that accentuate the rear-wheel drive power this car's always been known for.

Above, the roofline is very fastback coupe with a short rear deck behind. The rear fascia is curved in profile with one piece taillamps at either side. The look here is often controversial amongst Mustang enthusiasts, who routinely pan its appearance on forums.

The 2017 Ford Mustang has a modern throwback look that carries a lot of appeal for this generation's pony car fans. 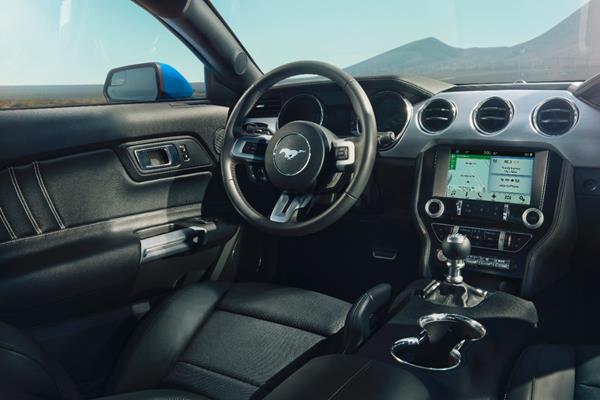 One thing that improved with the Mustang's updates is the interior. Gone are the cheap plastics and rattle-prone edging. The new Ford Mustang is much more upscale but still retains its throwback appeal with the overall design theme. Especially with the dashboard. Good materials quality and a nice layout set the tone for a great Mustang interior.

Standard equipment for 2017 includes keyless entry and ignition, a backup camera, rear folding seats to expand trunk space in the coupe and a tilt-telescoping steering wheel. Active noise cancellation in EcoBoost-equipped and GT models further aids the interior experience on the highway.

Most everyone will enjoy the front seating of the 2017 Ford Mustang, which is well done and comfortable at all trim levels. There is just enough bolstering to remind one that this is a sports car but not so much that it becomes intrusive or uncomfortable. That's left for the optional Recaro seating in the performance models, which lose a lot of the comfort in favor of sportier cushioning and more track-ready credibility. The standard seating has options such as heating and cooling, adjustable bolsters and added adjustability, depending on packaging.

Both the driver and front passenger are treated to good headroom, legroom and shoulder room. Storage for gadgets and gear is also plentiful in the Mustang.

The rear seats of the 2017 Mustang are largely for groceries or children. There isn't much space there, even less so in the convertible, and no adjustment whatsoever. A child in a booster seat will do well there, but otherwise the Mustang's rear seats are likely to be left empty.

We do like the cargo room in the 2017 Mustang, with a 13.5 cubic foot trunk in the coupe. That's spacious and the rear seats fold down to allow things to pass through for even more versatility. That's lost in the convertible, whose trunk is a mere 11.4 cubic feet. Most buyers of the topless Mustang probably aren't too concerned with trunk space. 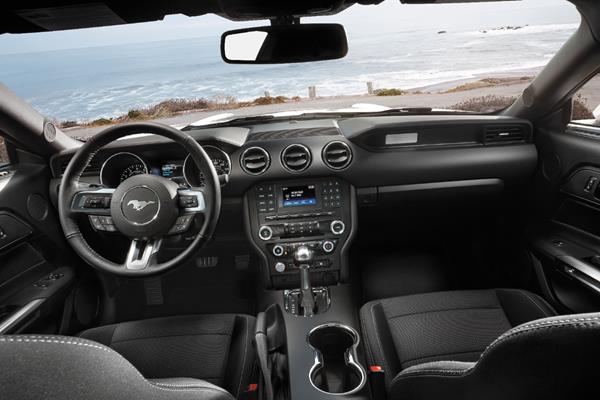 The 2017 Ford Mustang has Ford's latest Sync 3 infotainment for the upper-level infotainment packages. The basic Sync voice-activated system, which has a tiny 4.3-inch touchscreen, is good enough for those who just need basic Bluetooth and some audio controls. The Mustang now has its Track Apps functions as standard equipment, allowing even base model owners to have 0 to 60 timers and lap course timers with top-speed recording.

With the upgrade to Sync 3, the 2017 Ford Mustang sees a lot of new tech. Sync 3 replaced MyFord Touch last year, which isn't missed. Familiar smartphone/tablet pinch and swipe gestures are recognized by the Sync 3 touchscreen and an 8-inch high-definition touchscreen makes everything easy to figure out and use. Integrated apps and smartphone integration are all par for the course here as well. It's very nicely done.

There are three engine choices and either a manual or automatic transmission option for the 2017 Ford Mustang. EPA ratings are unchanged from last year with the base V6 receiving a 21 mpg combined rating with the manual transmission (17 mpg in the city, 28 mpg on the highway). The automatic improves that to 22 mpg combined (19 city, 28 highway). These are not terribly impressive numbers for a base engine in this class.

The EcoBoost models are powered by a turbocharged 4-cylinder that is much better for fuel economy returns. It's EPA-rated at 26 mpg combined with the manual transmission (22 city, 31 highway) and 22 mpg combined with the automatic (21/32). These numbers outclass most of the competitions' upgraded engine options.

The performance GT models of the 2017 Mustang have a large V8 that has fuel economy estimates of 19 mpg combined with the manual transmission (15 mpg city, 25 mpg highway) and the same with the automatic, but with an added 1 mpg to the city rating. Compared to the competition, these are about average returns for a performance model in this class. 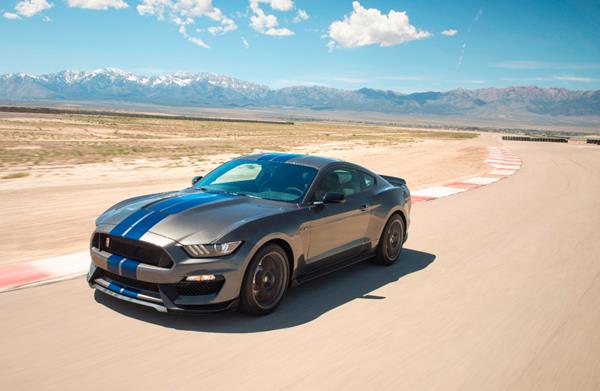 The 2017 Ford Mustang follows on the heels of its same-generation brethren with just about average reliability expectations. The J.D. Power and Associates Vehicle Dependability Study still rates the 2017 model with an "About Average" score. Two recalls, one for door latches and the other for the engine cooling system, have been issued for the 2017 Mustang, further dampening its likely quality.

The 2017 Ford Mustang has a pretty good safety rating on the whole. The National Highway Traffic Safety Administration (NHTSA) has given it a 5-Star overall rating with a full suite of best-possible five-star scores across its crash test series. That's unusual in the muscle car and coupe classes.

The Insurance Institute for Highway Safety (IIHS) wasn't quite as generous with the 2017 Mustang, giving it top scores of "Good" across its crash test lineup with the exception of the small overlap front crash test, which scored a second-worse "Acceptable."

A full array of advanced safety options are available for the 2017 Ford Mustang, including front crash mitigation as well as advanced driver aids such as adaptive cruise control and lane departure warnings. 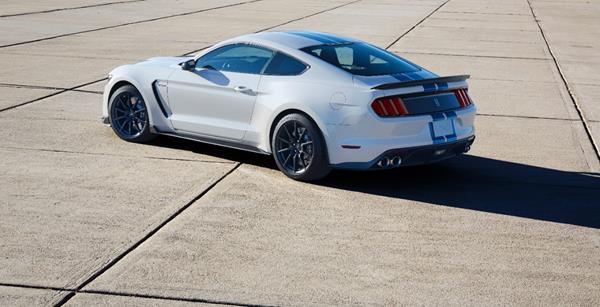 A lot of changes for the Mustang for this new generation have to do with performance. Most notably is the change from a solid rear axle to an independent rear suspension like every other modern vehicle on the road. Ford tuned this to be well-equipped for performance driving and made several other chassis updates to go with that major design change. All Mustang models are rear-wheel drive.

In the engine compartment, there are three choices for the 2017 Mustang. The base engine is a 3.6-liter V6 that outputs 300 horsepower and 260 foot pounds of torque. A 6-speed manual transmission or an automatic are the options for the gearbox. Neither of them will improve the sluggish performance and boring drive that the base level V6 offers. This engine is largely meant for fleet purchases and is what will likely be in a Mustang you might rent.

Most Mustangs on the road are likely powered by the turbocharged EcoBoost option, which is a 2.3-liter 4-cylinder that produces 310 hp and 320 lb-ft of torque. Again, a 6-speed manual or an automatic is offered. This little engine outputs its peak numbers much more quickly than does the naturally-aspirated base engine and it provides those outputs readily with the turbos spooling quickly. It's a very likable engine to for the Mustang, especially with a manual transmission to add to the fun factor.

The Mustang GT models are powered by a throaty 5.0-liter V8 that chugs a whopping 435 horses and 400 foot pounds from its thirsty throat. Same transmission options are available, tuned for the bigger engine. This growler really makes nice noises and does very well for the car. There are more powerful pony cars on the street, but the balance of everyday capability and track-ready fun times is really good in the 2017 Mustang GT.

Unlike previous generations of the Mustang, this new-generation has excellent highway and road characteristics with positive cornering and a less skittish cornering experience. A quieter ride on the highway is also a nice boon.

Compared to other pony and muscle cars on the market, the 2017 Ford Mustang offers some good value characteristics. The Mustang, especially in its GT series, generally holds value well over time and the base model EcoBoost can be well-equipped at under $25,000. We'd suggest going there unless serious performance is your main concern.

The convertible Mustang is a good choice for those who just want a weekend car with a fun driving experience and summer appeal. 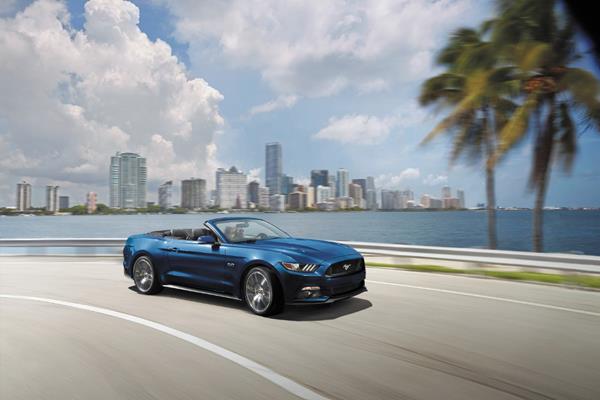 The Mustang's rating slid a bit compared to last year thanks to those safety recalls. It is otherwise unchanged from last year's model. That means that our general assessment remains the same and the Mustang is a car we recommend to sports driving enthusiasts who don't want to spend too much and are interested in Americana and nostalgia. The Mustang's initial goal in 1964 was to be the average person's sports car and that remains its mission for 2017.

Competitors to the Mustang are other classic redesigns such as the Chevrolet Camaro and the Dodge Challenger, both of which offer uniqueness separate from the Mustang. The Camaro is more competitive in terms of on-road performance for handling and driving fun, whereas the Challenger is more competitive for both engine power output options and more interior space. Another option would include the Subaru BRZ and Toyota 86 models, which are virtual twins. These cars offer a lower starting point for similar handling and fun, but with a lot less power under the hood. They are excellent beginner's choice options compared to the base-level Mustang.

Most buyers of the 2017 Ford Mustang will be sold thanks to its excellent styling, iconic name and solid all-around characteristics. The Mustang is as American as it's ever been and as fun as it can be.