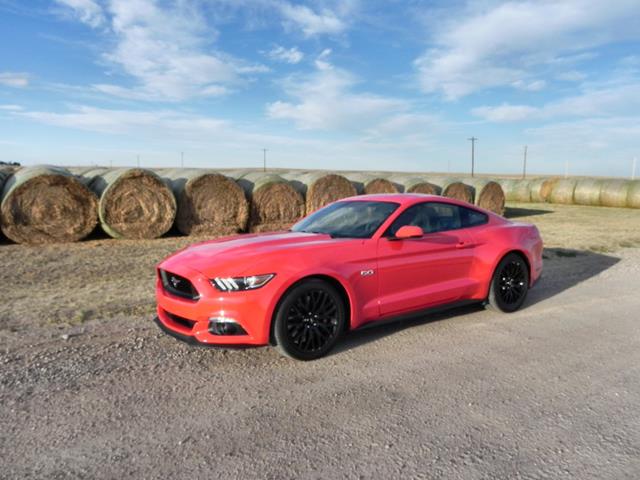 Overview (Final Score: A)
The 2016 Ford Mustang is a powerful mixture of nostalgia and present-day expectation. Redesigned in 2015, the Mustang jumped into the modern age without losing its focus on being the affordable, everyman's muscle car. This pony car that started the term continues to carry with it performance and style and does so with a greatly-improved interior and a much more sports-oriented chassis.

Key upgrades for the new Mustang are found in the new independent rear suspension, a first for the pony car and just added this generation. Also added are many interior improvements, including higher materials quality and better design ergonomics. Upgrades for the 2016 model year include integrated turn signals in the GT's hood vents, a new infotainment interface called Sync 3, and a new Black Accent and California Special set of packages for the GT models.

The 2016 Ford Mustang is still a 2+2 coupe or convertible offered with three engine options, two transmissions choices, and a variety of package upgrades. Trim levels are designated by the engine choice (base, EcoBoost, and GT) with sub-trims including Performance and Premium.


What We Loved About the 2016 Ford Mustang


What We Didn't Love About the 2016 Ford Mustang 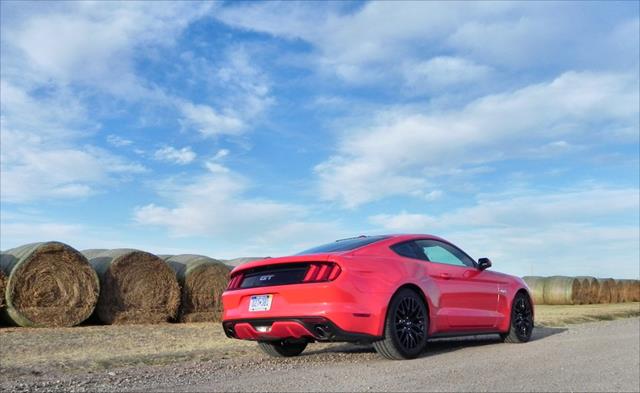 Exterior View (8/10 relative to market)
The Mustang gained a new look last year, with significant upgrades inside and out. The exterior of the 2016 Mustang carries the basic appeal that made the Mustang popular when it hit showrooms in 1964, but with a much more modern appeal and better use of Ford's new design trending, especially in the grille and front fascia.

The 2016 Ford Mustang has the wide-mouthed, split grille with the slightly overhanging lip that has marked several Ford vehicles recently. This general Ford look began with the Fusion's design language a few years ago. Above that lip is a strong curve towards a relatively flat hood line that runs to the windscreen. Twin tunnels run along either side of the hood to accentuate the fenders that come suddenly on their side. Slitted headlamps with angular foglamp bezels flank the grille work.

The front fenders are low and soft, with only slight bulges marking them apart from the hood. Behind them, the nostalgic speed lines of the Mustang, which have been there almost since the beginning, mark the upper and lower portions of the bodywork. They terminate at wide rear fender bulges that accentuate the muscular power promised in this pony car.

The roofline is all coupe, with a near-fastback run down to a short rear deck. The rear fascia is curved in profile with a one-piece taillamp to either side. Those lamps don't bend over to the fender, keeping with the Mustang's long styling cue at the rear, with the side marker lamps instead being integrated quietly into the rear fender bulge behind the tire.

The look of the 2016 Mustang is both throwback and modern, carrying a lot of appeal for pony car fans of this generation. 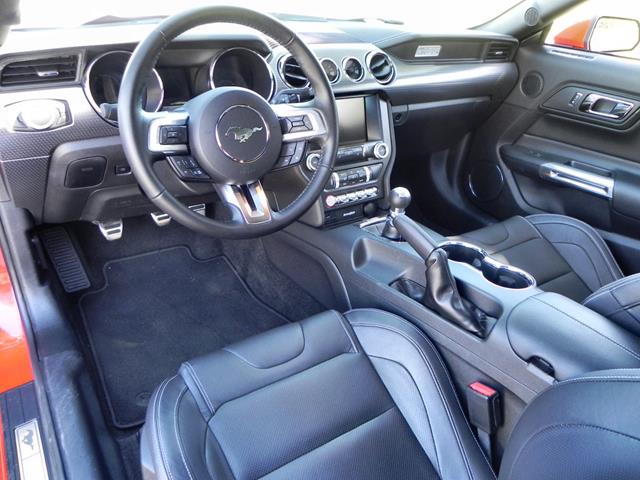 Interior Comfort, Quality, Ergonomics (9/10)
In comparison to years past, the new Mustang is far more upscale in its interior, but still manages to retain some throwback nostalgia, especially in the overall dashboard design. Materials quality is far better than it has been and the general experience, even at the base level, is better than ever.

Standard equipment in the 2016 Mustang includes keyless entry and ignition, a backup camera, a tilt and telescoping steering wheel, and rear folding seats to expand trunk space (Coupe model only). Many upgrades are available through the trim levels and options packages. The interior of the EcoBoost and GT models is further enhanced by active noise cancellation, which helps reduce road noise and improve the highway driving experience.

Seating in front is very well done at all trim levels. The optional Recaro sport seats remove some of the niceties available in other packages (heated/cooled seats, adjustable bolsters), but add a lot of sports driving credibility to the car. The driver's position, no matter the seat choice, is very good and now accommodates the big and tall better than in years past. The front passenger will appreciate the legroom, shoulder space, and headroom the Mustang offers.

The back seats, however, are a different story. The Mustang has always been a "2+2" and that hasn't changed. Those rear seats are largely for the occasional child safety seat, in a pinch, or maybe the dog. They are otherwise too small for adults or even teenagers.


Technology (9/10)
The base model Mustang comes well-equipped with a basic Sync voice-command system for audio and phone control. The Track Apps functions are also standard equipment, giving even the base model's owners the ability to measure track times, 0-60 speeds, and so forth. A 4.3-inch screen centers these.

In the upgrade, though, Ford enters a new era with the 2016 model year, adding its brand new Sync 3 touchscreen infotainment interface to the Mustang. This is an option in upper trims or through standalone packages. It's far faster than the outgoing MyFord Touch system and much easier to use. Familiar smartphone pinch and swipe gestures make the screens intuitive for most users to learn. Everything runs through a high-definition 8-inch screen. 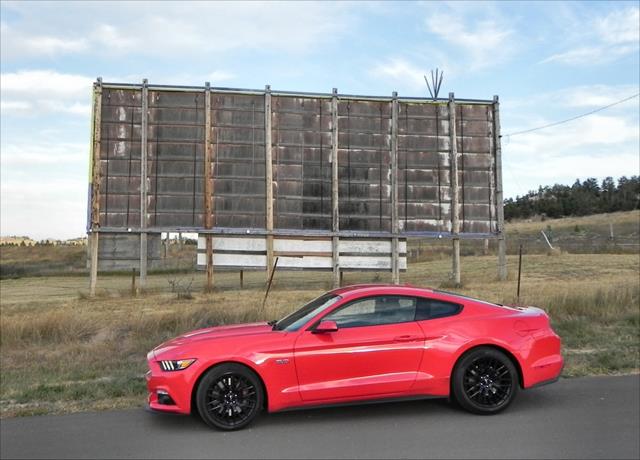 Fuel Economy (8/10)
The 2016 Mustang has three engines and both a manual and automatic transmission choice. The base V6 engine has an EPA rating of 21 mpg combined with the manual transmission, returning 17 mpg in the city and 28 mpg on the highway. These are not terribly impressive fuel economy returns. The automatic improves the combined rating by 1 and the in-town rating by 2 mpg.

The big V8 in the GT is rated at 19 mpg combined with the manual transmission (15 city, 25 highway) and gains only one point in the city with the automatic. For a big eight-cylinder option, these are fuel economy returns on par with most of the similarly-equipped competition.


Predicted Reliability, Initial Quality Ratings (7/10)
There is little to use as an indication of the expected reliability for the 2016 Ford Mustang, but using the 2015 model year as our benchmark, we can expect it to be about average. The J.D. Power and Associates Vehicle Dependability Study rating for the 2015 Mustang was average.

The 2015 models were affected by safety recalls, including two for fuel system problems and one for seat belts. It's not likely that there will be any safety recalls for the 2016 model year. The 2016 Mustang includes a 3-year / 36,000-mile basic warranty. 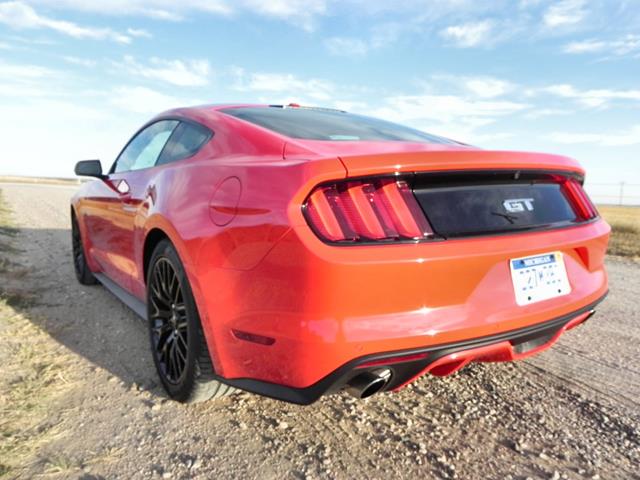 Safety (9/10)
Although the 2016 Ford Mustang has not received full crash testing, it's structurally unchanged from 2015. For that model year, the Mustang received an overall top rating of 5-Stars from the National Highway Traffic Safety Administration and a top rating of "Good" in all conducted tests by the Insurance Institute for Highway Safety.

Standard equipment of note includes the MyKey parental controls from Ford, which allows parents to limit the capabilities of the 2016 Mustang when their children are driving. Optional technology includes adaptive cruise control with forward collision alert and blind-sport warning with rear cross-traffic alerts.


Performance (9/10)
There are three engines available for the 2016 Ford Mustang and a choice of two transmissions, either a six-speed manual or a six-speed automatic. Rear-wheel drive is standard. 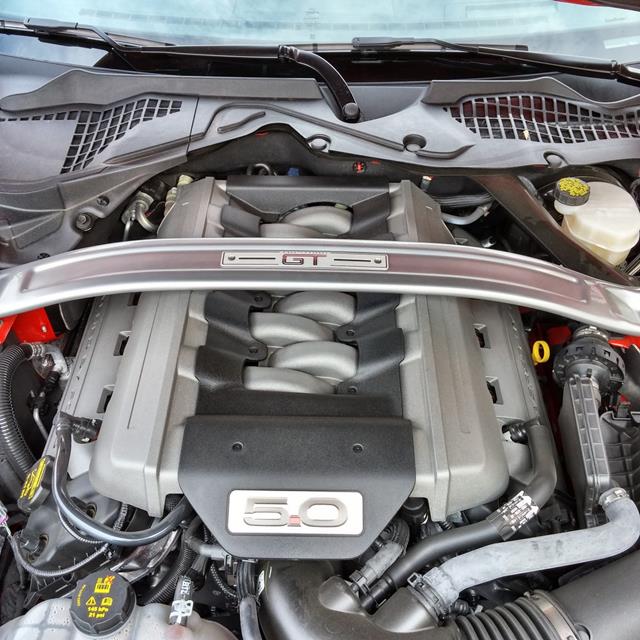 The base level engine is sluggish and unimpressive on most fronts. The turbocharged EcoBoost option outclasses it on every front, including fuel economy (above). It's rare to see the base level V6 in this-generation Mustang outside of a fleet vehicle. The turbo four with its better torque output has a surprising amount of acceleration, putting the 2016 Mustang into the 6-second area for 0-60 miles per hour times. The GT with its big V8 comes in below 5 seconds, putting it on par with nearly any other pony car on the market with a similar V8.

Last year introduced improved suspension and chassis design for the Mustang as well, which continues into 2016. For the first time ever, the Ford Mustang now has an independent rear suspension, which greatly improves its handling in corners and gives it more comfort on the highway. As a sports car, the Mustang has greatly improved due to these chassis upgrades and is now much more than a mere straight-line speedster.

In everyday driving, the 2016 Mustang offers well-balanced handling and a good drive. Although some competitors may show a bit more finesse in comparison, the Mustang can now hold its own and is far more enjoyable as a daily driver.


Pricing and Value (9/10)
In keeping with its roots, the 2016 Mustang is a value-oriented muscle car with a good buyer proposition for the market. The base model begins at under $24,000 and comes well-equipped for that price. Upgrading to the more fuel-efficient engine option is less than $600, making that EcoBoost in the coupe model an extremely value-oriented buy for the amenities offered and performance given.

Some longer-term value retention may be had in the (very likely) collectible special editions being offered for 2016. These include the return of the popular and nostalgic California Special package and Black Accent bundle for the top-end GT model. These are often considered the more sought-after versions of the car in later years as they are limited to one model year and only a small percentage of sales include them.

Most of the value for the Mustang, however, has traditionally been in its staying power as a popular cultural icon in American muscle cars. Its reputation as the "everyman's muscle car" continues and its status as the car that began the pony car tradition holds. 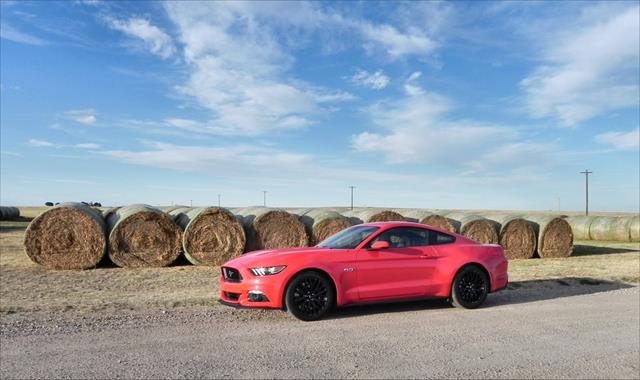 Total Score and Competitive Comparison (65/80, 85%)
Our overall score reflects the general excellence to be found in the 2016 Ford Mustang. Its mixture of nostalgia and modern, its continued focus on what made it great fifty years ago, and its excellent value for the dollar keep it as a top choice in American sports cars.

Competitors include the Chevrolet Camaro, long seen as the chief rival for the Mustang. The Camaro offers competitive powertrain options and similar ride and handling, though it may be a bit more refined on the curves now that it shares platforms with some very sport-tuned Cadillac models. The Dodge Challenger is the two-door competitor from Fiat-Chrysler, but falls short in power and cornering on most comparable levels while being superior in ride comfort, rear seat room, and (for many) throwback appeal. The relatively newly-minted BMW 2-Series offers a compelling alternative to the American sports cars.

In overall combination of price, performance, and accoutrements, though, there are few that can beat the 2016 Mustang. For that, we give it an "A" rating and leave it to brand loyalty to decide which American retro-muscle you'd prefer today.