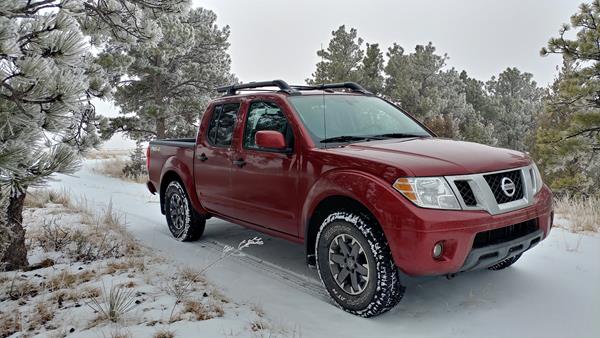 The Nissan Frontier continues to sell well on the North American market despite all odds seeming to be against it. The reason is simple: the Frontier hits a formula that resonates with small pickup truck buyers. Amid a growing spate of midsize pickup truck rivals, however, the 2019 Frontier faces stiff challenges if it's to continue holding its own.

The Frontier was last given a major upgrade in 2005, but remains a top seller in the midsize segment. Small updates have continued to keep it relevant enough to remain in the top rankings for sales in its segment. The 2019 Frontier continues with that, adding a larger 7-inch infotainment screen to upper trims.

The basic formula for the Nissan Frontier has remained the same since its introduction: provide a small, capable, rough-and-ready pickup that makes no bones about being a truck. That attitude, plus the excellent value offering to be found in the Frontier, have kept it marketable. The smallest of the current crop of midsize trucks, the Frontier lacks the refinement and muscle of many of its rivals, but sports a lot of attitude anyway.

The 2019 Nissan Frontier can be had as a King or Crew cab with the truck's bed length following that. Rear-wheel drive by default, four-wheel drive is optional on the Frontier, as is either a four-cylinder or a six-cylinder engine. Engine and drivetrain will determine transmission options, which can include either of two manual shift options plus an automatic. There are five trim package levels for the 2019 Frontier.


What We Love About the 2019 Nissan Frontier:


What We Don't Love About the 2019 Nissan Frontier: 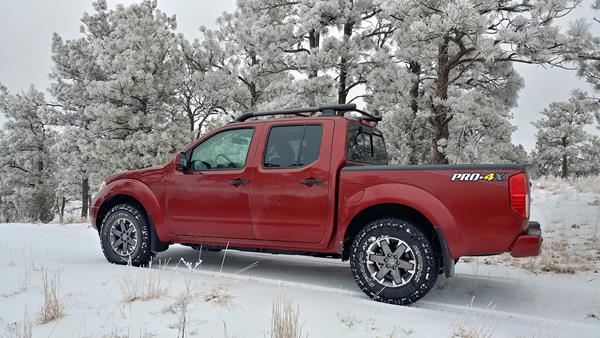 The 2019 Nissan Frontier continues with the basic, but well-done styling of the Frontier's long-in-the-tooth current generation. Everything about the Frontier's design announces that it's a pickup truck, but doesn't attempt to make it look bigger or tougher than it is. If anything, the primary design motif for the Frontier seems to be "scrappy."

The Frontier is the smallest of the midsize trucks on offer today, which is a large part of its appeal. The little Nissan has a look that changes with trim points as well, though only slightly. What changes the Frontier's appearance the most is the addition of an optional tubular roof rack. The Pro-4X package also adds more lift and toughness to the Frontier's curb appeal.

The look of the Frontier is most clearly defined by thick front fender flares, mirrored on the rear, and an unapologetically truck attitude. Most everything about the Frontier promises that it can get the job done.

The interior for the 2019 Nissan Frontier is very dated. There's a lot of 1990s throwback in there, but, oddly enough, the old school look works for the truck. The blocky, cheap-feeling interior design has good materials where it counts. Seating, for example, has a work-ready feel to it that doesn't feel cheap at all and the hard plastics of the dashboard are offset by strong-looking (and feeling) switchgear that promises long service.

The exterior of the 2019 Frontier promises a utilitarian focus and scrappy attitude. The interior follows this with a work-ready feel and a general "didn't need it, didn't add it" motif. Everything about the Nissan Frontier says it can be beat up and abused while out there getting the job done.

Losers to this attitude, of course, are comfort and convenience. Seat adjustments and options, even at the highest-level trim, are minimal and taller folks will find themselves looking out the top of the windscreen no matter how much adjustment is made beyond just laying flat. Headroom similarly suffers and legroom is compromised as one attempts find a sweet spot between seatback recline for headroom and arm length to the wheel.

The utilitarian nature of the 2019 Frontier does mean that in the crew cab, installing child safety seats is easy and getting things into and out of the truck is also relatively easy. The bed, which can be 5- or 6-feet, depending on cab configuration, is accessible from all sides easily. Tie-downs are also plentiful and a low-cost rail system can be added as a factory or dealer option for the Frontier. We'd recommend getting the bed extension cage that can go with that, which adds a lof of extra cargo options when flipped forward or back. 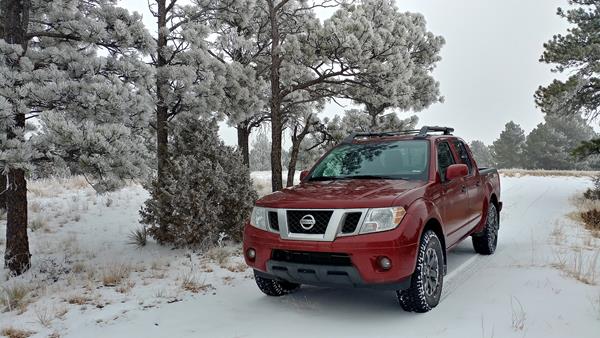 There has been steady technology improvement in the Frontier since its introduction over a decade ago, but what's offered still lags behind most rivals. Given that the best-selling model in this segment isn't a whole lot better on the infotainment front, though, we don't think most buyers really care much about in-vehicle consumer-grade tech.

That said, there is a big gap between the 2019 Frontier's capabilities and what's available. Even with the new screen upgrade added this year to some trim levels, the Frontier's infotainment feels clunky and very dated. It operates as such too. Block graphics and limited usefulness are the norm here. Bluetooth is good and easy to connect and there is a USB and AUX plug for connections. Navigation and another USB are added with upgrades.

The Frontier dropped a bit in reliability expectation last year, but bounced back this year with a slightly higher score from J.D. Power and Associates, improving to "Better Than Most." The Nissan's high expectation for ruggedness is not without foundation.

When the Frontier was new, in 2005, safety testing at the crash test bodies in the United States were different than they are now. Changes to those crash test metrics mean that the 2019 Frontier suffers from lower scores than its counterparts in the midsize pickup truck segment.

The National Highway Traffic Safety Administration (NHTSA) rates the 2019 Nissan Frontier with four (out of five) stars overall, giving it three stars for frontal, five stars for side, and four stars for rollover ratings.

The Insurance Institute for Highway Safety (IIHS) has rated the 2019 Frontier with top scores of "Good" on its moderate overlap front, side impact, and roof strength tests. The Frontier received a second-best "Acceptable" for its rear crash protection and second-lowest scores of "Marginal" for both small overlap front tests. The Frontier received a "Poor" rating for its headlights. 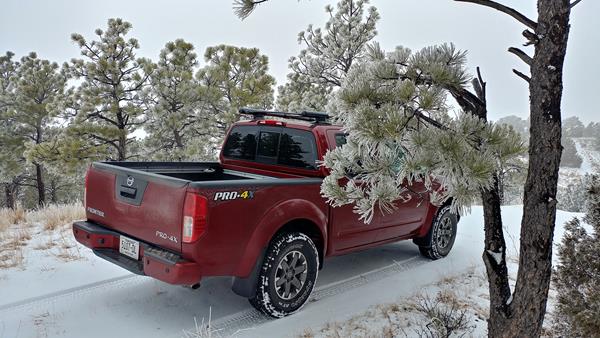 The 2019 Nissan Frontier has an old school quality about it that includes its near-bulletproof drivetrain design. It comes standard with a strong little 2.5-liter four-cylinder engine that outputs 152 horsepower. A five-speed manual transmission is also standard and a five-speed automatic can be opted for. This is a good base engine, though not as powerful as some might prefer, for the Frontier. It's best in the two-wheel drive configuration for the truck, making it a daily workhorse.

The upgrade engine is a 4.0-liter V6 that outputs 261 horsepower and 281 pound-feet of torque. The V6 delivers just the right amount of power for the Frontier, keeping it strong without being overbearingly muscular. A six-speed manual transmission is standard on most trims and a five-speed automatic is available as an option.

As a daily driver with general work duties as its focus, the 2019 Nissan Frontier is a solid choice. The six-cylinder engine offers good towing and hauling capabilities for the truck, without feeling weak, and the size and demeanor of the little Frontier are perfect for that kind of focus. It gets around town well, can do highway duties when required, and won't slouch.

On the highway, though, the Frontier is less than comfortable. The cabin is cramped to being with, but add in the bouncy, squishy nature of the truck at highway speeds and it inspires no confidence. Under load, this improves, but only marginally. The lack of creature comforts are also a bummer.

We do love the Pro-4X package with its affordable off-road goodies and capability. It's not on par with the Jeep-like capabilities of some rivals, but it definitely has the goods to get you where you need to be.

The Nissan Frontier shines when it comes down to a price comparison. It's priced lower than most rivals in almost every comparable package. We'd skip the top-most trims, unless a Pro-4X package is needed, and aim for the S Work Truck or SV, depending on options required. Value and resale retention are highest at those points. We'd also recommend the V6 upgrade and, if weather is a factor, the 4x4 drivetrain. 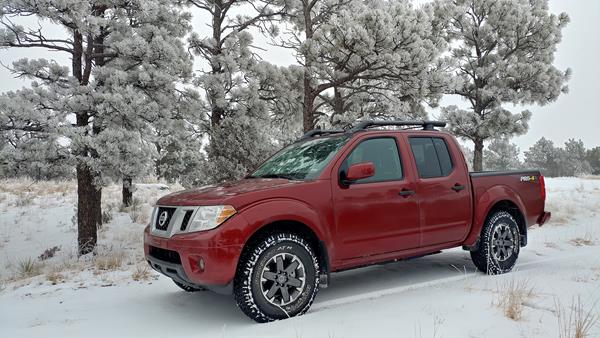 The midsize pickup truck segment is growing fast and it's becoming a more popular stopping point for utility buyers. There are some strong competitors on offer, including the all-new Ford Ranger, the Chevrolet Colorado, and the best-selling Toyota Tacoma. The Tacoma is polarizing to look at, but is otherwise the most comparable of the offerings against the Frontier. The Ranger and Colorado are larger than the other two and offer better interior experiences with more comfort.

The 2019 Nissan Frontier offers a very affordable, capable little pickup option that doesn't have the hangups of the others in the segment. Everything about the Frontier says "pickup truck" and it's not shy about letting one know it's ready for the job. Its spunky personality and rugged looks are definite draws.