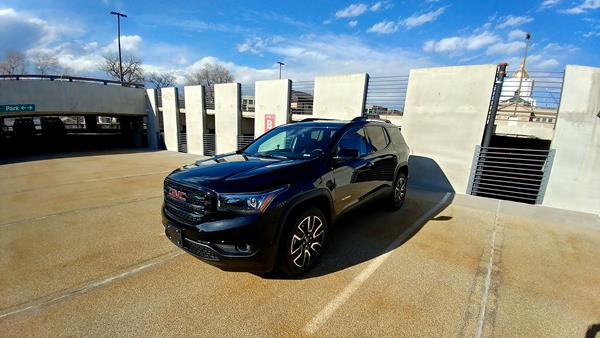 The GMC Acadia is a solid-selling, midsized crossover in the premium market. As one of the first sport utilities in the segment, the Acadia became popular for its strong build, interior luxury, and capability.

The Acadia was redesigned in 2017, saw a light upgrade last year, and enters 2019 unchanged from there. This SUV drives well, gets good fuel economy for its size, and has a less busy cabin than some luxury options. It's not as luxurious as its price might bear, however, and some competitors are more daily-usable than is the Acadia.

The 2019 GMC Acadia is refined and comes with a lot of options to meet needs. There are six trim levels for the 2019 Acadia, including the special-order-only base SL trim. Both two- and three-row options are available for the Acadia and two engine options are also offered. Front-wheel and all-wheel drive are also options. 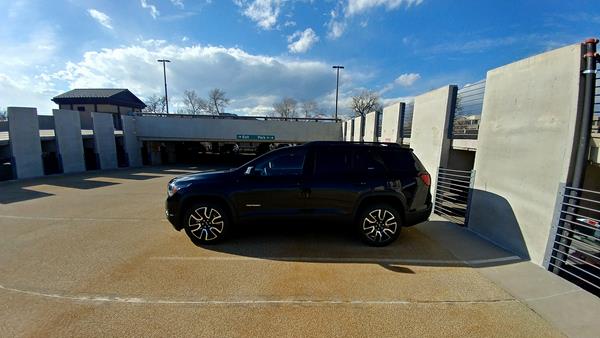 GMC is generally well-known for their truck-like designs and mark-hitting appeal. The 2019 GMC Acadia is a good example of that, having a somewhat old-school SUV style about its modern design. This creates an appeal that resonates with truck-based SUV buyers who maybe don't really need that truck part. Sitting in the somewhat larger midsize arena, the Acadia doesn't shy away from its squared-off foundation, making that work for it rather than hide from it.

The flat fascia on the 2019 Acadia includes a sharp grille design in a semi-oval with the Isiseye headlamps flanking to either side. The thin bumper below that and even thinner intake at bottom help accentuate the grille and lighting. The Acadia's approach angle is squared instead of angular, giving it a beefier look to its front end.

This truck-based look is continued throughout with the Acadia's clearance being both high and angled rearward to create a slanted, muscle car look to its stance. The rear departure, angled upwards, accents that while straight lines along the bodywork give more emphasis to the forward lean of the Acadia. These squared edges have the added benefit of allowing the driver to always know where the corners of the Acadia are when maneuvering.

The rear pillar and deleted final pillar at the back give the Acadia a floating glass greenhouse at the cargo space behind the rear wheel. That goes along with the slightly narrower, but more round-edged front and rear windows to oppose the square-bodied look a bit. The flat roofline, which angles slightly to pinch the rear against the forward slant, finishes the muscular but refined look of the 2019 Acadia.

The interior of the 2019 GMC Acadia can be a bit hit and miss, depending on expectations. As a premium vehicle, the higher-quality materials found throughout the rig are welcomed, but the simplistic design may appear lower rent than some might expect. GMC rides in the zone between standard and luxury as a premium brand and must carefully walk the line between standard fare and high-end luxury. GMC also trends towards more truck-like design motifs, including with the interior of the Acadia, which is blockier and more robust than that found in sister company Buick, which exists in the same premium arena.

The Acadia's nicely done interior, though, focuses on ergonomics and quiet luxury and does a good job of making those goals reality. The minimalist design of the passenger space in the 2019 Acadia is well-done and welcome. Compared to some of the tech-crazed and world-busy designs of other marques, the GMC Acadia feels more escapist.

Several standard features in the 2019 GMC Acadia include tri-zone climate control, five USB ports throughout the cabin, and electric-adjust front seating. The driver and front passenger will like the adjustability of their seating and the driver will enjoy the ergonomic layout of the GMC's controls.

The second row of seating is also nicely done, with excellent outboard comfort and a middle seat that's usable most of the time without much complaint. The optional third row is suitable for kids and seats two, but is a bit difficult to access and has little room for anyone over four feet in height. Access is easier and the second row's comfort is enhanced when the captain's chairs are opted for the second row.

Cargo space in the 2019 Acadia is a bit below par at 12.8 cubic feet behind the third row and 41.7 cubes behind the second (with the third folded down). Folding both the second and third rows down reveals 79 cubic feet of usable space. Seating folds flat for a usable cargo floor, we note, but there is a gap between the optional captain's chairs. We like the underfloor storage bins in the back of the cargo space and the large opening the hatch provides. For most, the cargo space will be good enough for most needs, but compared to others on the market, these numbers are smaller than average. 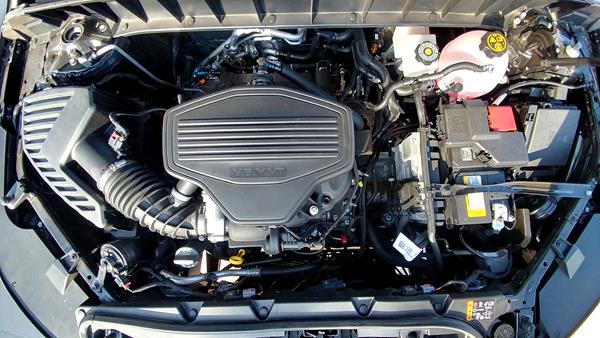 A big high point for current-generation General Motors vehicles is the new infotainment offered in most of them. For GMC, that means the standard 7-inch touchscreen includes Android Auto and Apple CarPlay. A Wi-Fi hotspot and a few other bonuses are also included in that standard system. An upgrade option adds IntelliLink on an 8-inch touchscreen for even more capability, to include navigation and Bose surround-sound.

Included with IntelliLink are intuitive remote control options for climate pre-sets and remote starting as well as GM's MarketPlace app for getting items on the go, such as coffee or restaurant reservations.

The 2019 GMC Acadia has two engine options and both front-wheel and all-wheel drive. The base engine is EPA-rated at 21 mpg in the city and 26 mpg on the highway. That beats most every other option in the midsize class.

Opting for the V6 engine lowers fuel economy to 18 mpg in the city and 25 mpg on the highway. Adding AWD to the mix lowers expectations by about a point each.

As it did last year, the 2019 GMC Acadia is rated as "About Average" on the J.D. Power and Associates Vehicle Dependability Study. There have been no recalls for the Acadia this year and GMC's warranty for the Acadia is about average for the segment.

The 2019 Acadia has done well in safety testing. The National Highway Traffic Safety Administration (NHTSA) has given the Acadia a four-star crash rating overall. This includes five stars each (the top score) for frontal and side crash results and four stars for rollover results.

The Insurance Institute for Highway Safety (IIHS) has given the Acadia top marks of "Good" for all crash tests performed. Including for advanced crash protection from automated detection and braking systems. 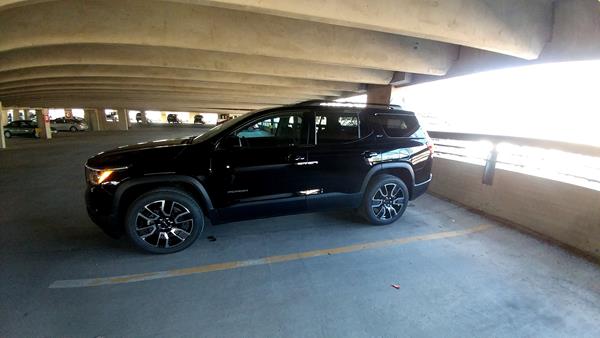 The 2019 Acadia has two engine options: a four-cylinder and a six. The 2.5-liter four-cylinder is rated at 193 horsepower and runs to a six-speed automatic transmission. This base engine is well-matched to the Acadia, but is the economy option without a lot of pizzazz. It gets the job done without flair and may be a little stilted for some who prefer more confidence in their drive.

For that, GMC offers a V6 upgrade for the Acadia. This 3.6-liter V6 outputs 310 horsepower and adds more muscle and confidence when acceleration and power delivery are key. Those who drive on the highway, up and down hills, or at altitude will appreciate the V6's better output. It's also more capable of making the AWD system feel ready.

Out on the road, the 2019 GMC Acadia has a good presence for the class and maneuvers much better than its size might indicate. The V6, in particular, is very well-suited to the Acadia's size and those opting for the adaptive suspension system in the Denali trim will like the added sharpness it imparts to the Acadia's drive quality.

The base model GMC Acadia is well-equipped at a good starting price, but probably won't appeal to those looking in the premium segment. Instead, the higher-end options in the mid-level SLE-2 and higher packages are a better value when all is totaled. For around $40,000, the Acadia can be nicely optioned and hold better resale value. We like the SLE-2, SLT, and Denali trims for those qualities. 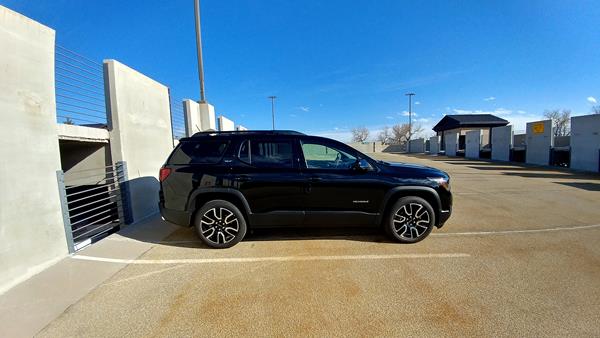 The 2019 GMC Acadia competes against solid competitors in the premium-level segment. The Buick Enclave, sister to the Acadia, is more contemporary and modern in its appeal and has many of the same general qualities as the Acadia. The Chevrolet Traverse can be optioned in its top package to compete with the lower-end Acadia models and is worth cross-shopping if price is more important. The Toyota Highlander, in its top-most trims, is commensurate with the Acadia at the mid level, but may not be as budget-friendly in some respects and is showing its age with a redesign due soon. Finally, the Lexus RX, which is a luxury option, is higher-priced than the Acadia, but offers a lot of lux for those bucks.

Compared to the few premium options available in the midsize segment, the 2019 Acadia offers a lot that will appeal to those looking. The more expensive luxury rivals aren't always better while the higher-end non-luxury options may not seem as svelte as is the GMC. The Acadia is distinctive, well-matched, and balances nicely on its own.