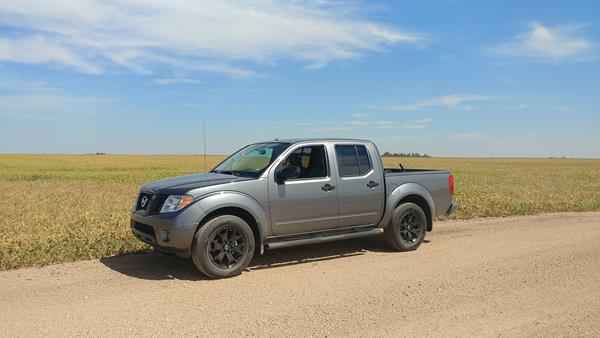 The little Nissan Frontier hasn't seen any major changes for nearly two decades, yet it remains one of the most popular midsize pickup trucks on the market. The 2018 Nissan Frontier carries forward from the 2017 model year with only a few changes and retains its rough-and-tumble "a truck is a truck" attitude.

The Frontier's best-selling package options are indicative of the buyers who want this pickup. The base model and it's slightly improved SV trim point are the most popular packages for the Frontier while the next-most is the higher-end Pro-4X package with its built-in off-road goodies.

The 2018 Frontier holds the rugged good looks of the midsize truck and includes many smart utility options. The Frontier is very outdated in technology and interior design compared to its rivals, however, but competes in price point and ruggedness regardless. There is a lot of appeal to the Frontier's attitude.


What We Love About the 2018 Nissan Frontier:


What We Don't Love About the 2018 Nissan Frontier: 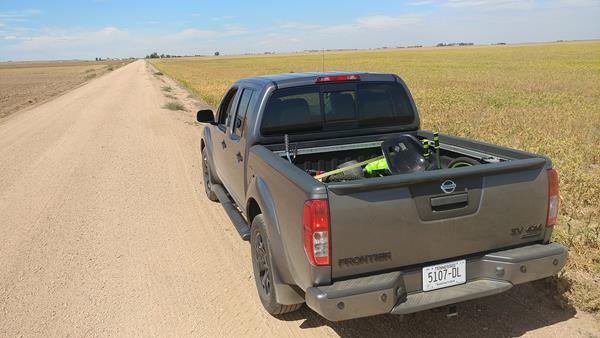 There is little that is polarizing about the 2018 Nissan Frontier's looks. It's a pickup truck and designed to look like one. The classic, unmistakable look of the Frontier has almost become a hallmark for it, having remained largely unchanged for so long. The Frontier is also the most compact of the midsize pickup trucks on today's market and capitalizes on that with its rugged appeal.

For 2017, Nissan dropped the chrome bumpers entirely putting body-colored covers on all Nissan Frontier models as standard. For this year, Nissan standardized some options such as the rearview camera, air conditioning, and cruise control--all of which were optional on the base S trim. A new Midnight Edition trim has been added for 2018, giving a blacked-out option for the Frontier that gives the truck a very muscular, sinister look. This blackout sees a dark gray paint scheme augmented with blacked wheeled, a blacked grille, and body-matching mirror caps and bumpers.

In terms of overall appeal, the expected looks of a pickup truck are present in the 2018 Frontier. A strong front fascia that centers on a heavy grille (marked by the signature Nissan V-motion design) and thick bumper are augmented by the lower angle for added clearance. The fenders have large flares and the bodywork is simple and strong.

Most of the Nissan Frontier's looks are created by its heavy, accented front fender flares, strong and flat hood line, and the no-nonsense pickup truck bed. A high ground clearance, thick tires in a wide wheel well, and a robust overall feel are the mainstays of the Frontier. Adding on the optional tubular roof rails, side steps, or bed-mounted roll bar only enhance this appeal. 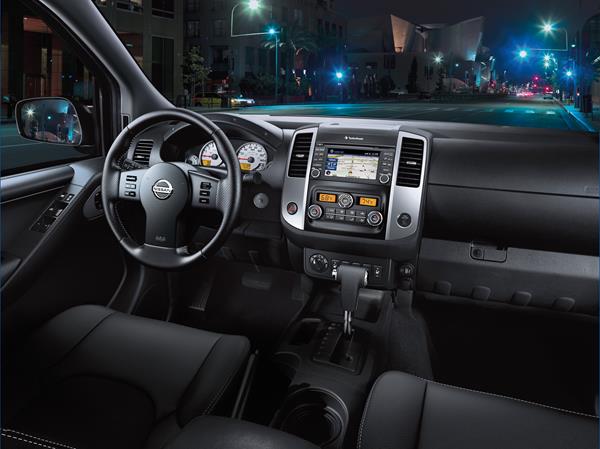 The 2018 Frontier's interior is very dated, with a lot of 1990s throwback in its design. Yet this is not as much a detriment for buyers in the pickup truck field as it would be in other markets. Pickups are seen as both workhorses and toys and the Frontier's interior plays to both expectations well. It's low budget, but very robust interior also speaks towards ruggedness in an unusual way.

The interior of the 2018 Nissan Frontier is plain and no-nonsense with plentiful use of hard plastics and a definite lack of advanced feature sets. This has the downside of making the Frontier the least-advanced and least-pretty of the midsize pickup truck options, but the upside of making it the least likely to be damaged or mourned should damage occur. Everything inside the Frontier promises to take a beating and keep on working.

That being said, the seating in the 2018 Frontier falls well behind rivals in comfort and adjustment options. There is plenty of room for most, but bigger and taller drivers might find the lack of significant telescope to the steering wheel and the odd angle of the resulting seating requirement for view of the instruments to be an annoyance. Knee room is also at a premium in the little Frontier, especially laterally for the driver. The rear seats are cramped in the King Cab and suitable mostly for groceries or the family dog, while the Crew Cab offers enough room for kids and the occasional adult back there, but no more than is found in the average compact car.

We do like that child safety seat installation in the back of the 2018 Nissan Frontier is easy, thanks to well-exposed LATCH connectors and easy-access overhead tether points. Underseat storage is also well done in the little Frontier. The cargo bed is very utilitarian with standard tie-down points at each corner setting the stage for usefulness. The spray-in liner option and highly recommended slide-adjust tie-down rails for the Frontier are very useful add-ons. The bed extender cage that can flip forward of the wheel wells to create a "grocery paddock" is also a nice touch and removes easily when not needed.

Technology in the 2018 Nissan Frontier has improved over what was virtually the same truck a decade ago, but that tech is still well behind rivals in the segment. The upgraded tech screen is only a 5.8-inch touchscreen that is an odd holdover from Nissans of several years ago. The blocky graphics, small screen, and limited usefulness are all down points. Standard expectations such as Bluetooth audio and phone connectivity, a USB and AUX plug, and navigation are there in the upgraded tech package for the Frontier. So is satellite radio and so forth.

Speaking of satellite radio, the 2018 Frontier also has the audio upgrade option which adds a very well-done and beautiful-sounding Rockford Fosgate 10-speaker stereo to the truck. 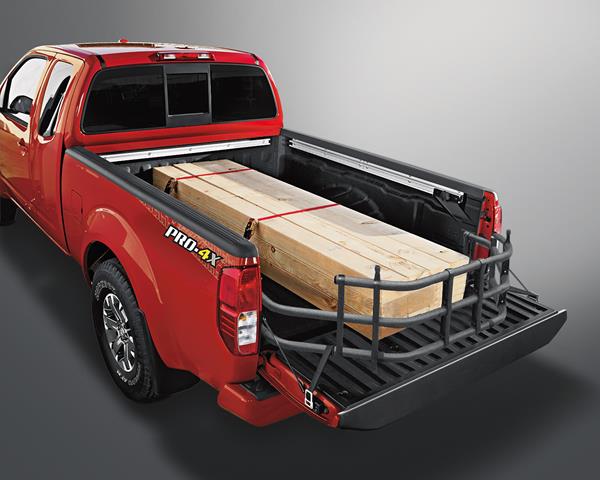 Fuel economy in the 2018 Nissan Frontier is below par for the class. The four-cylinder engine returns 17 mpg in the city and 22 mpg on the highway while the V6 hardly dips that with 16 mpg city and 23 mpg on the highway. Transmission choice only marginally affects those MPG returns. Adding four-wheel drive to the Frontier drops fuel economy by about two points per.

A few blips in the Frontier's electronics have lowered its reliability rating with J.D. Power and Associates in their annual Vehicle Dependability Study. The 2018 Frontier is now rated as "About Average" for the segment, but rides on a reputation of high expectation for rugged dependability that is well-deserved. The long-in-the-tooth design of the Frontier pays off when it comes to reliability.

The 2018 Nissan Frontier has a few negatives on its safety expectation thanks to some updates to the way crash tests are conducted now versus when the Frontier's design was new. The National Highway Traffic Safety Administration (NHTSA) has only conducted frontal and rollover tests on the 2018 Frontier, giving it three stars each for those.

The Insurance Institute for Highway Safety (IIHS) has given the 2018 Frontier a full suite of tests and results. Top scores of "Good" were given by the IIHS for the Frontier's moderate overlap front, side impact, and roof strength test results. The Frontier received a second-best "Acceptable" score for rear crash results and a second-worse "Marginal" result for small overlap front driver-side crash tests. 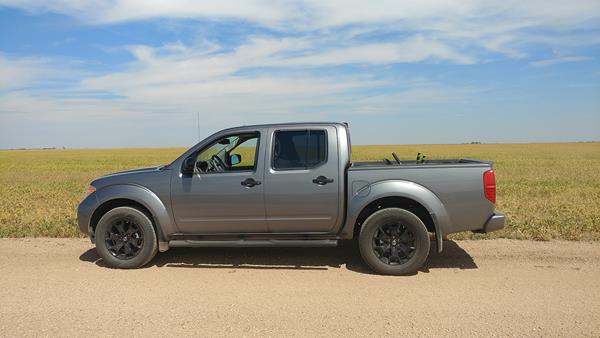 The bad fuel economy returns for the Frontier are a direct result of the relatively old-school design of the truck's drivetrains. The 2018 Frontier comes standard with a 2.5-liter four-cylinder engine that outputs 152 horsepower to a five-speed manual transmission. A five-speed automatic is available as an upgrade option. This base engine is barely powerful enough for the Frontier's size and the attached transmission options do little to enhance the engine's weak feel. For around-town driving and light-duty work needs, though, the four-banger will get the job done.

The sacrifice in MPG is almost non-existent when upgrading to the V6 option, however, and we'd highly recommend doing so. The 4.0-liter V6 outputs 261 horsepower and 281 pound-feet of torque, adding towing as a viable option with the Frontier. The V6 is powered exactly right for the truck, delivering good highway speed and a lot of confidence around town. A six-speed manual transmission is standard with the V6 and a five-speed automatic is offered. We'd suggest staying with the manual unless convenience is required as the manual offers much more gearing freedom for towing and hauling.

As of this writing, we've driven the Nissan Frontier in most of its available configurations, including both the four-cylinder and six-cylinder engine options and three of its five trim points. Having towed with the Frontier, driven it loaded and empty, gone off-roading multiple times, and generally used the truck for most intended purposes, we can say it tends to shine in any format. The four-cylinder engine is a good around-town variant and will get simple jobs done easily. The six-cylinder, however, is where the goods are at and is well worth the upgrade.

For those who will drive primarily on the road and who need a good work truck, the Frontier in any of its trims with the V6 added will do very well. It's confident, gets around easily, and can tow and haul without complaint. The Pro-4X package is best for those who expect to leave the pavement regularly and will keep up with all but the most expensive off-road rigs on the market. The Frontier Pro-4X is amazingly astute as a general off-road go-getter and retains the Frontier's capabilities for towing and hauling to boot.

Knowing all of that, the Frontier is not as refined as other options on the market. It's loud on the highway, Jeep-like in its maneuverability and road absorption, and has little in the way of creature comforts. Those downers are counteracted by the Frontier's lovability and the quirkiness that comes with its uniquely rough attitude.

Compared to most small trucks on the market, the 2018 Nissan Frontier is generally priced lower in most of its trim points. In our view, it'd be difficult to justify the expense paid for the top-level SL trim package, but S Work Truck, the SV and Pro-4X offer a lot of excellence for the price being paid. We'd recommend looking at any of those three for your Frontier purchase, the Pro-4X being for those who need an off-road goer.

With good towing, a great build, and a good resale value expectation, the Frontier remains a good choice in the midsize pickup truck segment. 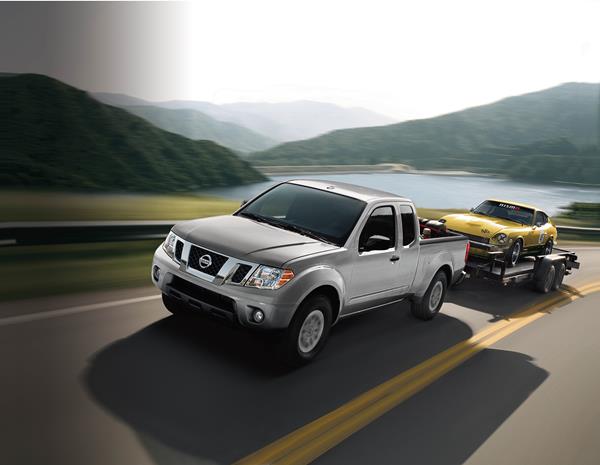 The midsize pickup truck segment has seen a lot of interest in recent years. Competing against the 2018 Nissan Frontier are the best-selling Toyota Tacoma, the Chevrolet Colorado, and the GMC Canyon. Of these three, the Tacoma outsells the Frontier handily due to its great mix of low-end, mid-level, and high-end packages and generational upgrades. The Tacoma is polarizing in looks, however, and not quite as rough-and-ready in appeal. The GM twins are both larger and more expensive, though the Colorado does somewhat compete with the Frontier price-wise when considering the Frontier SV and Pro-4X.

Given all of that, the 2018 Nissan Frontier offers a lot to the customer who doesn't want to spend the price of a full-sized truck on a midsize offering. For the needs of anyone buying a midsize truck, the Frontier ticks all boxes and adds on a rugged personality and strong work ethic to the mix. Proving that age does not diminish strong coverage of the basics, which make any vehicle classic.