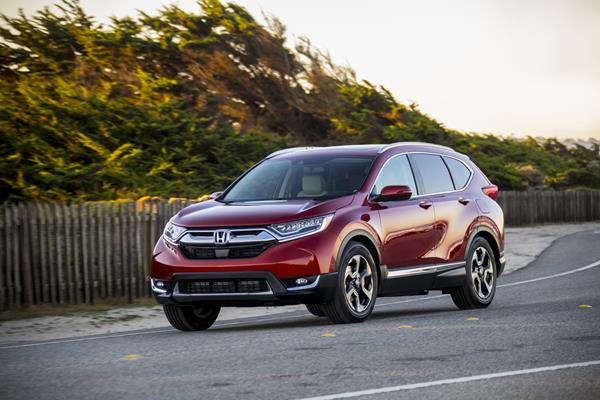 An all-new Honda CR-V was introduced in 2017 with some pretty major changes to the best-selling compact crossover. The 2018 model carries those on and does very well with its turbocharged engine, excellent interior ergonomics and carefully designed safety systems. Some might be surprised at how good the optional all-wheel drive systems are at keeping the CR-V out of trouble.

The 2018 Honda CR-V has a lot in common with the equally popular Honda Civic, having a similar dashboard, instrument cluster, driver controls and updated infotainment. There's a reason the new CR-V continues to win awards and remains a best-seller in the segment. 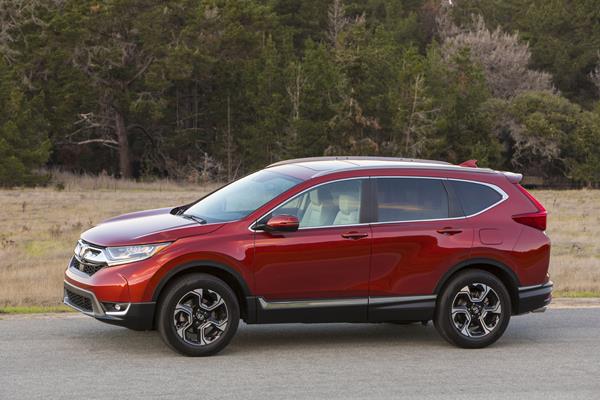 To be perfectly frank, there isn't much to write home about when it comes to the 2018 Honda CR-V's exterior looks. It's not ugly, but it's not very eye-catching either. It's an almost perfect study in middle-of-the-road design elements aimed at staying as contemporary and non-polarizing as possible. Kind of like listening to NPR during lunch hour.

Design elements on the 2018 CR-V are focused on the car-like front grille, emphasis on the crossover's high ride height, and the curvature of the rear window glass and pillar. All of which are nicely done and well proportioned.

The new design aesthetic Honda has for its vehicles is not so much statement making as it is clarifying. We like it, but in 10 years it'll be forgotten. That's not a bad thing, as edgy design language can often break a brand quickly when it misses the target, whereas best-selling vehicles are almost always contemporary designs without design school portfolio-making looks. 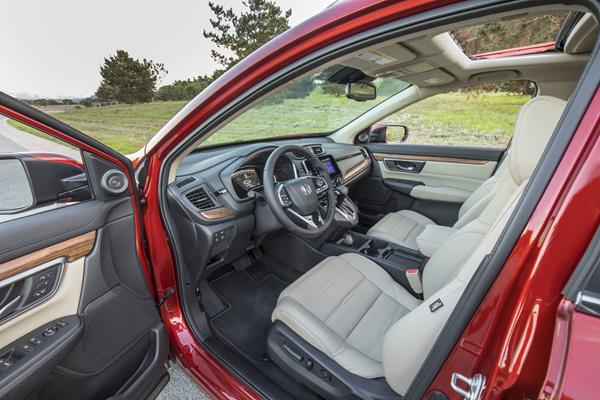 The 2018 Honda CR-V's interior is one place that's always shined and continues to do so with the vehicle's new generation. Styling is excellent, with a great look and feel complemented by well-done ergonomics.

The physical controls in the CR-V are well placed and easy to use, especially the driving controls and simple climate controls. We aren't big fans of the touch-sensitive controls, especially those on the steering wheel, because it's easy to bump them and accidentally turn up the volume or change the station. We're also not fans of the instrument cluster's inset, which encourages sunlight to hit the edges, blurring out the fuel gauge and the like.

Where we really like the CR-V is where it counts: roominess. The 2018 CR-V has very good entry and egress, thanks to wide door openings, and plenty of legroom and headroom getting in and out. The seats are well padded and nicely designed with enough adjustment to make them comfortable, even in the back. The rear bench is best for two adults or three kids, but no more.

Small touches are brilliant, like the ability to press the door lock button for a second or so and have all four windows crack open to vent out heat. The practical, height-adjustable rear hatch opens to unveil a very large cargo space for a vehicle this size. It stands at 39.2 cubic feet with the seats up. The height-adjustable cargo floor lets you choose between a flat loading space or a lower space with more room. We recommend storing necessities that aren't needed regularly, like jumper cables, under that cargo floor and on top of or around the spare tire.

Dropping the rear seats, which fold truly flat, reveals a massive 75.8 cubic foot space that is easily accessed through the rear hatch or side doors. Parents will want to know that the LATCH system in the rear seating is Euro-style, so it's very easy to get to without having to lean on or shove the car seat into place.

The 2018 Honda CR-V has plenty of tech on board, but it's hit-and-miss when it comes to everyday usability. All but the base model have smartphone integration and advanced safety items, including Apple CarPlay and Android Auto. We recommend making sure you use that regularly, as the voice controls and some of infotainment menus are clunky and annoying at times. Especially with anything behind radio tuning. Android or Apple devices can be accessed via voice control by pushing the voice recognition button on the steering wheel for about half a second, bypassing the car's voice control.

Navigation is an upgrade item in the CR-V and probably not worth getting if you have a fairly new phone and good coverage. Your on-phone nav will sync seamlessly via the CarPlay/Auto plug-in and is likely much better than the in-car nav.

For plugging in, there are four USB plugs throughout the CR-V: two up front and two in the rear. 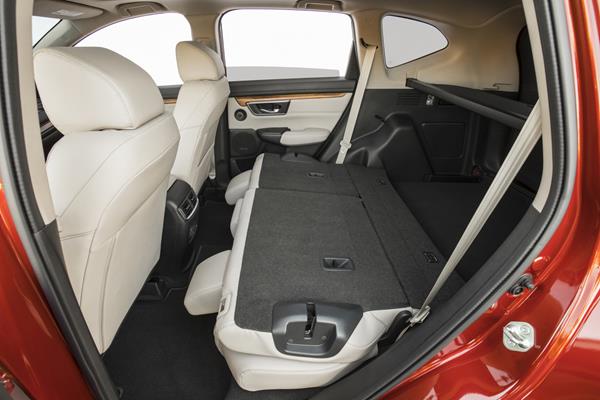 There are no reliability reports published for the 2018 CR-V as of this writing, but because the 2018 model year is almost identical to the 2017 model year, we can use those as our guide. And those numbers are good.

The J.D. Power and Associates Vehicle Dependability Study ranked the 2017 CR-V as "Better Than Most" in its annual reliability study based on buyers' survey answers. There were two recalls for the 2017 CR-V in 2017, but none in 2018 as of this writing, leading us to believe the vehicle's kinks have been ironed out.

The 2018 Honda CR-V has kept its top scoring on safety tests. The National Highway Traffic Safety Administration rates the 2018 CR-V with five stars overall, including a top score of five stars for frontal and side crash tests, and four for rollover tests.

The Insurance Institute for Highway Safety has given the 2018 Honda CR-V a Top Safety Pick rating with a maximum score of "Good" on all crash testing. 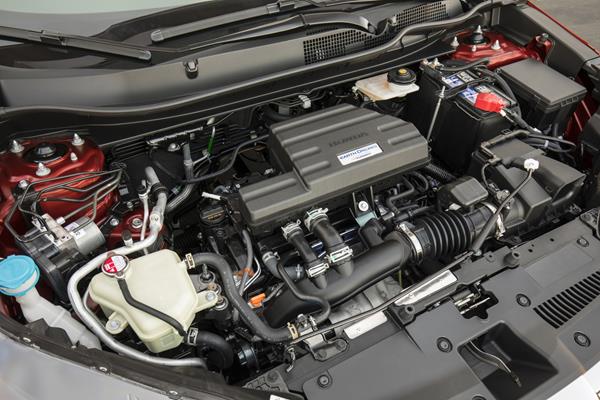 The 2018 CR-V has two engine choices, both of which are good for the vehicle. The base engine, found only on the LX model, is a 2.4-liter four-cylinder that outputs 184 horsepower and 180 pound-feet of torque into a continuously variable transmission (CVT). This is enough for the compact crossover to get around while not feeling sluggish, but only returns so-so fuel economy and not much fun.

The upgrade engine, standard on all other CR-V models, is far better. This is a 1.5-liter four-cylinder that's been turbocharged to produce 190 horses and 179 lb-ft of torque to the same CVT. It's a much peppier choice and boosts fuel economy to boot. A win-win.

The CVT holds the Honda CR-V back some, though, aiming to maximize fuel economy most of the time. In the initial jump and for the first few miles per hour, the signature Honda "start fast" is there, making the CR-V yet another fun Honda when driving around town.

On the highway, the CR-V does well for itself, but sometimes feels sluggish when combating side winds or driving at higher speeds. Steep hills can also be a slow-down if the Honda is loaded.

For most people, everyday driving in the 2018 Honda CR-V will be great. Ride quality and handling are good, and beat most of this class for refinement. Maneuverability is also good and visibility is excellent, giving the CR-V a real advantage around town.

The base model 2018 Honda CR-V is priced at the average entry point for the class, but we recommend stepping up to a better trim point for more content and the upgraded engine. The fuel economy and improved daily goodness will more than make up for a little extra on the monthly payment.

The EX and EX-L are the best choices for most buyers, offering a lot of luxury and extras without being too expensive. The main difference between the two trims is leather upholstery in the EX-L versus cloth in the EX and the upgraded stereo. The EX comes standard with a sunroof, 7-inch touchscreen and the turbocharged engine. That'll be plenty for most needs.

Dealerships aren't that eager to put cash on the hood of the 2018 CR-V to improve sales, which are already brisk and will likely remain so. The resale value of the CR-V has been traditionally higher than the segment's average and will probably continue that pattern, improving the longer-term prospects for a CR-V buyer now. 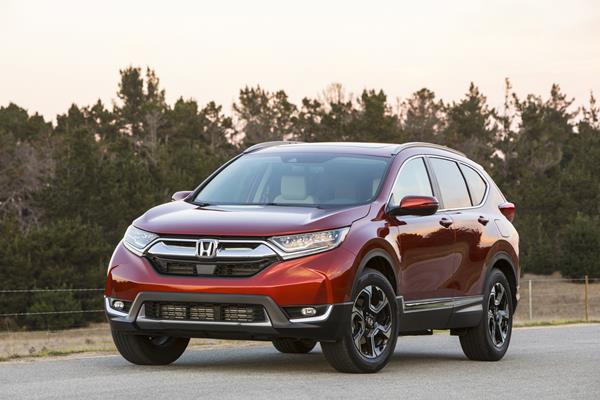 The compact crossover-SUV market has stiff competitors for the 2018 Honda CR-V. As the fastest-growing segment in the US, most manufacturers are bringing the best they have to market.

Against these rivals, the 2018 Honda CR-V really stands out for its solid all-around excellence and versatility. There are a lot of reasons to buy the CR-V and every one of them is a good one. Exactly the reason it remains a best-seller.