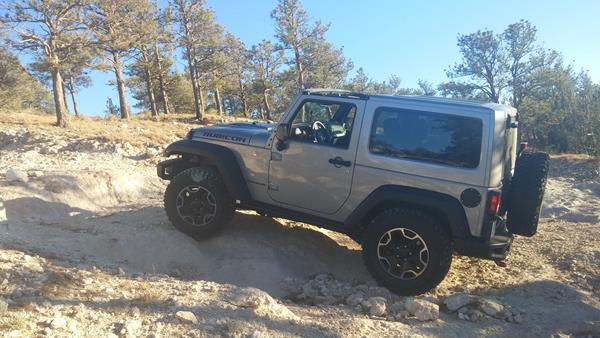 The Jeep Wrangler is well known for its legendary off-road prowess. The Wrangler and its Willy's inspiration have long been the benchmark for trail readiness since they were first introduced over 50 years ago.

Today the 2017 Jeep Wrangler carries that torch forward and does it very well. It has a lot of quirks and interesting habits, but they're expected by Jeep enthusiasts and welcomed by those who know what this sport utility is truly capable of doing. There are few things as fun as climbing into a Jeep Wrangler Rubicon and either heading for a trail or making your own.

For 2017 not much has changed from the Wrangler's previous model years. There is now an LED lighting package available for headlights and fog lamps, as well as a new Cold Weather package with a first-time offering of heated seats and remote starting. The Wrangler is otherwise unchanged from its 2016 model year. And it didn't need much changing.

From the base-model Wrangler Sport to the top-level and over-capable Wrangler Rubicon, there's a Jeep in the Wrangler lineup for everyone. 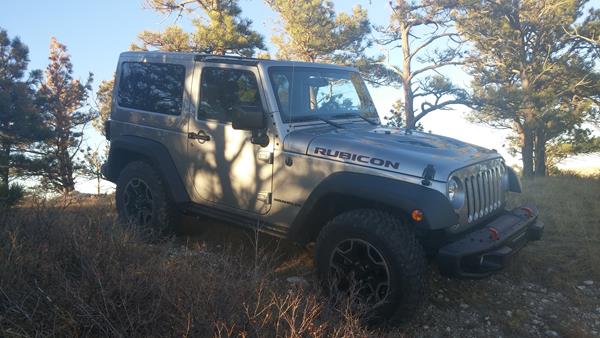 The Wrangler is a oddity in that it's a love it or love it vehicle. It has a rough-and-ready look and a timeless quality to it. A GI transported from the original World War II days with the Willys would immediately know what this vehicle is a Jeep without any prompting. It's that classic.

The exterior of the Jeep Wrangler hasn't changed much in a decade. Various trim packages will change some of the exterior look, such as the huge winch-ready bumpers of the Rubicon package and the sportier look of the Sahara model. New this year are optional LED lighting packages for the headlights and fog lamps. These add a strangely modern but still very functional look to the Wrangler.

The 2017 Jeep Wrangler has the classic 2-piece body appearance with the longish hood attached to a square box with wheels underneath. Everything about the Jeep seems optional, making even standard items like doors become creature comforts on the Wrangler.

The windshield folds, the doors can be taken off without much fuss, the hard (or soft) roof is optional, and even the fenders and guards seem, well, easily replaceable. Everything about the exterior look of the Jeep Wrangler says that it's willing to take a beating to get you where you want to go. This inspires confidence in its driver and passengers, adding a fearless element to the adventure. 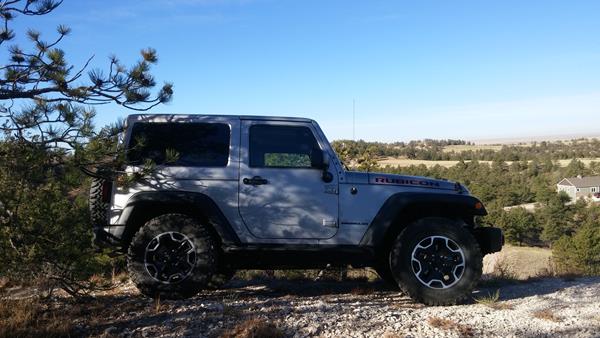 Don't expect to be comfortable inside a Wrangler for very long. A few things were added as options for 2017 that have been long-missing from the Jeep Wrangler. No, these don't include massaging cushions or 12-way adjustable driver's seating. They include heated seats and remote start capability. Both as part of the Cold Weather package that also adds all-weather floor mats.

The Jeep Wrangler's interior is otherwise much more spartan than the crossover-driving crowd might be used to. Air conditioning is optional. (Let that sink in.)

What is included is all about form following function. The dashboard is busy, but everything has a purpose from the OMG bar on the passenger's side to the push-button window controls oddly front-center on the console. Seating is comfortable enough up front that long treks won't result in a requisite trip to the chiropractor, but only if those trips are mostly through wilderness. As Jeep fans already know, the Wrangler is a terribly uncomfortable highway driver.

In the back, unless you opt for the Wrangler Unlimited, seating is useful for kids and only potentially OK for grownups. They're also a good place for the dog and a solid reason to get creative with the roof and tail packing options for your weekend in the wilderness.

As much as we love Chrysler's Uconnect infotainment system in the 2017 Jeep Wrangler, we can't give much in the way of tech points to the Wrangler. The infotainment is very last-generation, possibly even generation-before-last. The tiny 6.5-inch touchscreen with its choppy graphics and terrible interface was cutting-edge 10 years ago, but is now outdated.

The upside is that this fits very well with the Wrangler overall, which is the most mechanically inclined vehicle you can buy in today's market. Given that, a ritzy and ultra-modern display and techno-interface would be very out of place with the rest of the Wrangler's persona. Jeep enthusiasts who need more than what's offered should probably reconsider what they're buying their Wrangler for. Or have a look at the myriad of aftermarket options readily available for the Jeep.

What is there for tech is limited but useful. Bluetooth is easy to use, voice recognition for basic menu functions and setup is very good, and the screen isn't distracting at all because the driver quickly learns that it's uninformative and not worth looking at.

There might be a few sport utilities still on the market that boast lower fuel economy numbers on their window stickers than the Wrangler does. But we doubt it. Given the extreme capabilities of the 2017 Jeep Wrangler, that's hardly a downside to a buyer truly interested in and ready to use the Wrangler as it's intended to be used.

The 2017 Wrangler is rated 18 mpg combined, with 17 mpg in the city and 21 mpg on the highway. Traditionally, all Wrangler models have the same EPA rating, but in the real world, with the higher the trim level the less likely it is that those EPA MPG numbers will be met. Our Wrangler Rubicon test model averaged just 14 mpg over a week's driving. Subtract the off-road use and it climbed higher, but still didn't meet 18. The base Sport model is likely very capable of these estimates.

There are no current reliability ratings for the 2017 Jeep Wrangler, as of this writing. Since it is largely unchanged from previous model years, we can extrapolate from those what the likely reliability and dependability will be for this model year.

In previous model years, the Jeep Wrangler has been considered about average in its reliability expectations. We expect that trend to continue forward. We also note that the 2017 Wrangler has already been subject to a recall for airbag problems.

As if ride quality were not reason enough, crash tests are another compelling reason to never take a Jeep Wrangler on the highway. The 2017 jeep Wrangler received some of the worst scores recorded so far from the Insurance Institute for Highway Safety (IIHS). Given it's unchanged from last year, the Wrangler's abysmal National Highway Traffic Safety Administration (NHTSA) scores will not likely be any better when published.

The IIHS gave only one top score of "Good" to the 2017 Wrangler, for moderate-overlap front-impact test. It otherwise received second-worst "Marginal" and worst "Poor" scores on everything else that's been published. 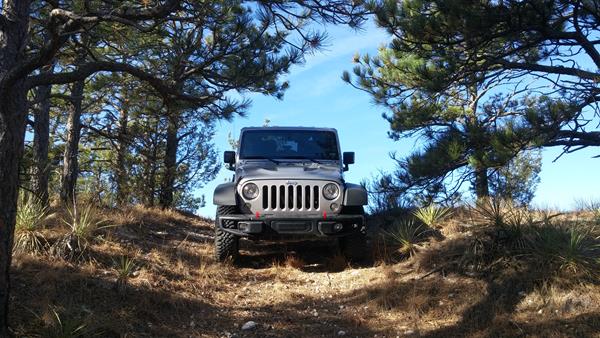 Performance-wise, the Wrangler is a surprise on some levels. It's been powered by a strong 3.6-liter V6 for some time, which outputs 285 horsepower and 260 pound-feet of torque. Those numbers seem weak on paper, but the Wrangler's build is all about torque maximization and its drivetrain does a splendid job of boosting output to each wheel. As such, the Wrangler in its standard 2-door format is capable of easy 7-second 0-60 mph sprints. Not many in the SUV realm can boast both legendary off-road cred and potent acceleration from a non-turbocharged gasoline engine.

With its 6-speed manual transmission (standard) and optional 5-speed automatic, the 2017 Jeep Wrangler can tow up to 2,000 pounds. The slightly larger Unlimited model can tow a little more than that at 3,500 pounds. Four-wheel drive with both high and low gearing ratios in the transfer case is standard on all Wrangler models and trims. Gearing ratios change for some packages, with the Rubicon having more aggressive lower gearing in both the transmission and transfer case.

On the road the Wrangler is often tough to drive. It's rough suspension, large and aggressively treaded tires, and lack of noise buffering take their toll. On the highway the Wrangler will easily keep up with traffic, but it all but protests having to do so through noisy gear changes and a knuckle-whitening ride quality.

Off the road things flip 180 degrees. There are very few vehicles as confident and easy to get to places in - no matter how remote - as is the 2017 Wrangler. This Jeep can do a lot of things in 2-wheel drive that other SUVs would balk at with all four wheels engaged. Bouncing, climbing, tipping to extreme angles and motoring with ease is what the Jeep Wrangler is all about.

Although the price of the 2017 Jeep Wrangler is relatively steep in some of the upper packages, when it's compared with other off-road-ready sport utilities, it's not too far out of whack. What the Wrangler lacks in refinement and accouterments, it makes up for things with robust and legendary off-road gear and capability. There are few comparable offerings to the Wrangler in today's market.

We also give the Wrangler high-value scoring because of its generally high resale value as an SUV. Depreciation for the Jeep Wrangler is typically far lower than with similar sport utilities on the market, even for heavily customized Jeeps. Higher packages, especially the Rubicon, tend to hold resale value better, but all Jeep Wranglers generally do well as trade-ins or sales.

There are no real direct competitors to the 2017 Jeep Wrangler. It stands alone and has for most of its career as an SUV. There are comparable SUVs that are on par with the Wrangler in terms of off-road capability and so forth. Some in the Jeep lineup alongside them.

The closest comparable vehicle would be the Toyota 4Runner with its off-road packages such as the TRD line and Trail model. The 4Runner is more a useful daily driver, but only very expensive packages can compare to the Wrangler Rubicon in trail capabilities. The Jeep Cherokee is another comparable, with its Trailhawk package having a good amount of capability for trail running - though nothing akin to the Wrangler Rubicon. The Jeep Renegade is also comparable in the same way and with a much shorter price tag.

The 2017 Jeep Wrangler stands alone in the sport utility market where off-road capability is concerned. Comparable choices come close, but are not the same. Add to that its nostalgic look, immediate credibility and excellent resale value, and it's a solid choice. There are drawbacks to owning a Wrangler, so it's not for everyone, but most who are interested in owning the most recognizable Jeep probably already know what they're getting into.