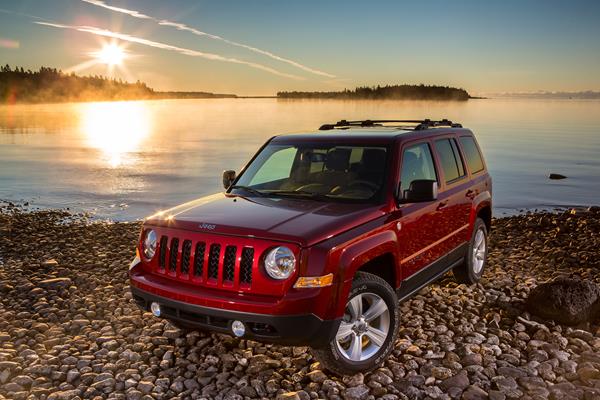 The 2017 Jeep Patriot is a 5-seat compact crossover that offers both true 4-wheel drive capability and a low entry price. The Patriot is also very aged in its design and interior, and far less appealing once that entry-level base model price point is analyzed. Yet the Patriot soldiers on as a favorite in the segment, thanks to its nostalgic looks and Jeep credibility.

All of our concerns about the Jeep Patriot from last year carry over to 2017 as the Patriot is largely unchanged from the past several model years. We have learned that, given the total overhaul given to the Patriot's brother-in-arms, the Compass, the 2017 Patriot will be the last year for this model and will ultimately be discontinued after 2017.

The compact crossover segment sees several competitors with strengths that greatly outweigh those of the Jeep Patriot, yet the 2017 Patriot continues to be compelling because of its low cost of entry into the Jeep nameplate and its true off-road credibility when properly equipped. Those, plus its family-sized strengths in terms of interior size, are all high points. 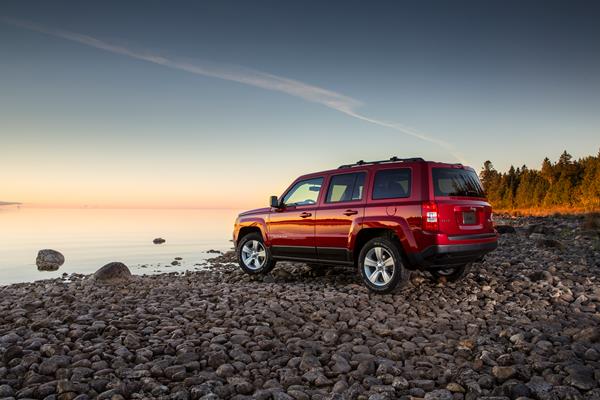 One of the greatest draws to the 2017 Jeep Patriot is its exterior. It's a throwback to more nostalgic boxy SUV days when Jeep ruled the roost as the most authentic off-road option. In the late 1990s and early 2000s, every Jeep was designed to resemble the ever-popular Wrangler model with its WWII roots and extreme capability. The Patriot continues that.

Round headlights, a slotted grille and a square, flat hood are the beginnings of the box that makes up the Patriot. The high windscreen and flat roof, as well as the brand-marking trapezoidal wheel wells, also make sure onlookers know that the 2017 Patriot is a Jeep. Squared windows and a flat rear hatch finish that styling cue.

For many shoppers looking in the compact crossover segment, there aren't many interiors that are more basic and plain than that of the Jeep Patriot. The 2017 model sees little change from the years before, thus is both dated and cheap feeling. Comforts are few and far between on the 2017 Patriot, though we note that seating is very good thanks to an older-school "pad here, not there" flat bottom with simple bolsters.

That odd "older is better" note does well for seating throughout the Patriot, making it very comfortable despite the cheap appearance. A definite high point to this crossover. Adjustments are minimal, so the big and tall or the height impaired will likely find the 2017 Patriot uncomfortable for that lack. Especially up front. 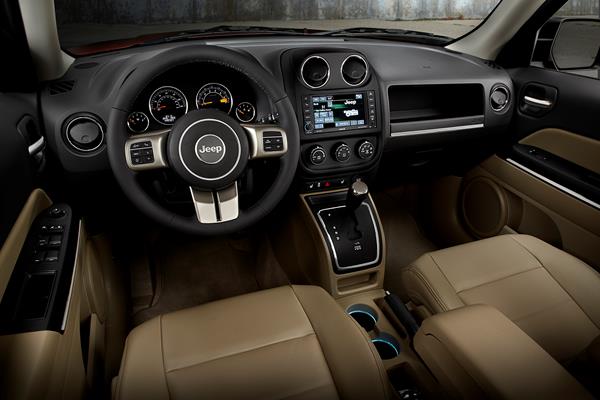 Rear seating is good and the 2017 Patriot is one of the few compact crossovers that can truly seat three across in the rear seat without need of a shoehorn to make it happen. That's a credit to the Patriot's square body styling, which maximizes shoulder room.

Storage is another concern in the 2017 Patriot. There just isn't much of it beyond the usual glove box and center console. Users of the Patriot will have to get creative about phone placement and gadget storage.

Cargo space is interesting in the 2017 Jeep Patriot. It's fairly large at 23 cubic feet behind the second row. That is in a large, square area, which requires a lot of stacking to take advantage of every cube. Actual usable space is about half the rating, unlike in most competitors which have a longer load floor versus upper space. With the second row folded, cargo space increases to 53.5 cubic feet. That is much more usable space as it's big and square and accommodates bulky objects well.

The 2017 Jeep Patriot is the only vehicle in the Fiat-Chrysler lineup, besides the ubiquitous Wrangler, that doesn't benefit from the brand's excellent Uconnect system. Instead the Patriot boasts an older version that is far less functional, far less usable and very outdated.

Base models have basic voice controls through a simple digital interface that isn't terribly capable beyond radio tuning and basic Bluetooth with a phone. The upgrade moves to a small, outdated 6.5-inch screen that has terrible graphics quality and a very "Oregon Trail" feel to its design.

The interface for that upgraded screen is clunky and not very intuitive and is largely text-based rather than graphical. The upgrade to include navigation is not recommended.

Fuel economy in the 2017 Jeep Patriot is a bit mixed. When 4-wheel drive options are included, MPG ratings are very good (considering) but when they are not, MPG numbers are low for the segment.

The base engine in the Patriot returns 26 mpg combined with a manual transmission (23 mpg in the city, 30 mpg on the highway). Upgrading to the continuously variable transmission (CVT, automatic) lowers that to 24 mpg combined (22 city, 26 highway) despite the CVT's expected superior efficiency. That speaks largely to the base engine's general low efficiency as a powerplant for the Patriot. 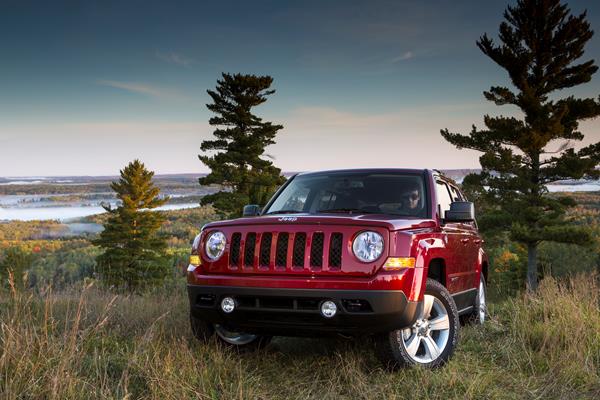 The upgraded engine can be had with a manual transmission as well, offering 23 mpg in town and 29 mpg on the highway. Upgrading to the automatic gives 23 mpg combined: 21 mpg city and 28 mpg highway.

Those latter numbers might seem low for the compact crossover segment, but give the 2017 Patriot far more capability than any in this segment can offer outside of the Jeep nameplate in return for those low MPG.

The 2017 Jeep Patriot is rated as "About Average" on the J.D. Power and Associates Vehicle Dependability Study. The Patriot's warranty is average for the class and its reputation from previous model years has not been stellar in terms of reliability. As of this writing, no recalls have been issued for the 2017 Patriot.

The 2017 Jeep Patriot's crash test scores are below average for the segment with mixed returns from both testing bodies. The National Highway Traffic Safety Administration (NHTSA) has given the 2017 Patriot low scores of three stars (out of five) for most crash tests. The Patriot received five stars for side crash tests, but only three each for front and rollovers. Those combine to just three stars overall on the Patriot's window sticker.

The Insurance Institute for Highway Safety (IIHS) gave the 2017 Patriot slightly better scores overall. The IIHS rates the Jeep Patriot with a top-most "Good" score for all crash tests except the small overlap front-crash, which is rated as "Poor." Most in this segment do not excel in that small overlap test, but few get that lowest-possible rating.

In terms of safety technologies, the 2017 Jeep Patriot carries only the basics with no options for higher-level upgrades or advanced equipment. 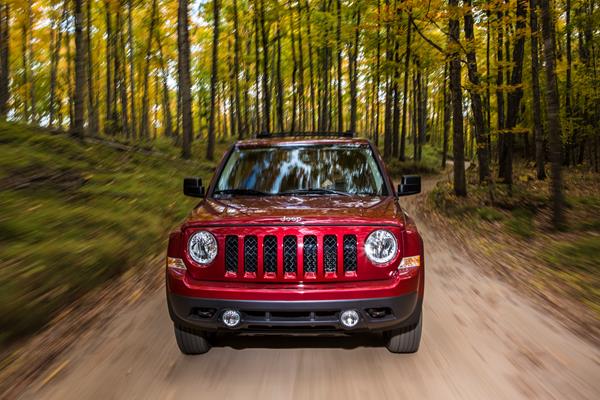 The 2017 Jeep Patriot is offered with two engine choices, three transmission options, and either front-wheel or 4-wheel drive. Upgrades to one or the other in these options are primarily through trim choice, but most trims have multiple options for both engine and transmission as well as drivetrain choices.

The base engine is a 2.0-liter 4-cylinder engine that outputs 158 horsepower and 141 foot pounds of torque. A 5-speed manual transmission is standard, with a continuously variable transmission (CVT) as an optional upgrade. Front-wheel drive is the only drivetrain choice with this engine. This engine is noted for its lack of brevity in the Patriot and its generally underpowered feel in all but low-speed city driving situations. The fact that it loses efficiency with the more efficient CVT upgrade is made speaks to that point.

The upgrade engine is the much-loved 2.4-liter 4-cylinder found throughout the FCA lineup. This churns out a respectable 172 horses and 165 lb-ft through any of three transmissions. The base transmission is a 5-speed manual that is offered only in FWD models.

Going to Freedom Drive I for an all-wheel drive-like 4WD drivetrain means moving from the manual transmission to the CVT. This does well with the larger engine and lighter-duty offroad drivetrain of Freedom Drive I.

Freedom Drive II becomes one of the most offroad-capable offerings in the segment with more capability than will be found in any competitor that isn't a Jeep. The Jeep Patriot with this configuration has a 6-speed automatic transmission and some added equipment under the chassis for better off-road handling. We note that the already-loud Patriot becomes even louder on the highway as a result of these upgrades.

The 2017 Patriot offers up to 2,000 pounds in towing capability and has a softer chassis than most in this class. Steering is not terribly responsive and ride quality is good around town, but overly cushy on the highway. Noise levels with any package of the Patriot are higher than the norm for the segment and more akin to econoboxes than to a crossover.

Off-pavement the Patriot is very capable and outshines any competing crossover in this class. Especially when Freedom Drive II is opted for.

The very low cost of entry for the base model 2017 Jeep Patriot is compelling and makes it a popular choice in this segment. There isn't much else to sell that model, with its very basic amenities and simple accouterments. Most should consider upgrading to the $20,000-ish point for more capability and better accouterments.

Shoppers would do well to cross-shop in the Jeep brand and elsewhere, as other offerings are often far more interesting when compared squarely. Just issuing a price-to-price look undervalues the competitors who are far better outfitted than the Patriot.

Resale is another issue with the Patriot, often being lower than average as a result of the model's low reliability expectation/perception and dated feel. This year could be the year to buy a Patriot, as it's the last year for the model. Dealerships will likely be giving great deals to buyers in order to move product off the lot before the year is out.

We would recommend that buyers look to the Latitude model for its total package of amenities and value. The MSRP for a 2017 Jeep Patriot Latitude 4x4 is about $26,000 before any incentives are given. 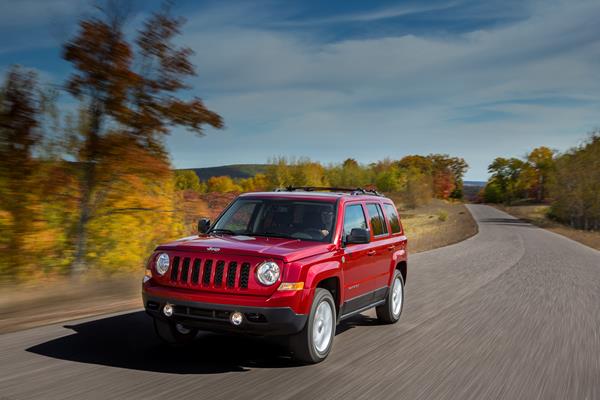 There are a lot of competitors to choose from in the fast-growing compact crossover segments. The Jeep Renegade and newly revamped Compass, both stablemates to the Patriot, have most of the Patriot's good qualities along with a lot more refinement and quality. Similarly, the less Jeepy Fiat 500X offers a good argument against the Patriot. The better-driving and highly superior interior of the Mazda CX-3 are also well worth considering as options. The Patriot may beat all of these in terms of base price point, but when comparing apples to apples, the others are more cost-effective if off-road credibility is not required.

When off-road cred matters, the only true competition for the 2017 Jeep Patriot are Jeep's own Renegade and Compass models, which are just as capable as the Patriot when the right off-road packaging is optioned. Otherwise the Patriot stands alone in the compact crossover segment when it comes to true off-road capability and credibility. Its nostalgic looks may finalize the 2017 Patriot as a viable choice for many buyers.