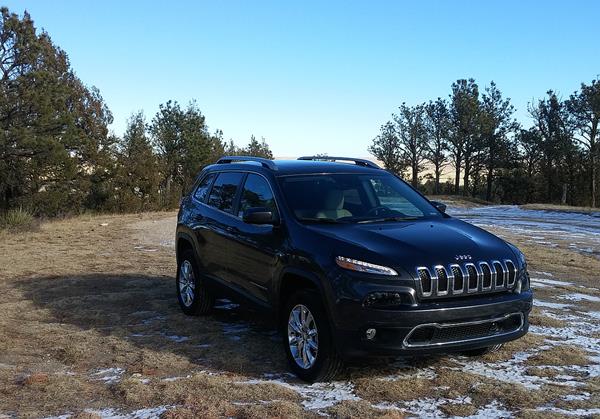 The 2017 Jeep Cherokee continues forward with the design revisions made a couple of years ago when this new generation of the Cherokee was introduced. For the 2017 model year, only minor trim changes and equipment revisions were made. Little needed changing in this excellent crossover in order for it to remain a top option in the compact segment.

The 2017 Cherokee retains the legendary Jeep penchant for off-pavement prowess. It's also notable for its roomy passenger space and smart infotainment system. Shoppers might also be surprised at how comfortable the Cherokee is on the road.

The Jeep Cherokee is a 5-passenger crossover-SUV offered in five trim levels, starting with the base model Sport and moving up to the top-tier Overland. 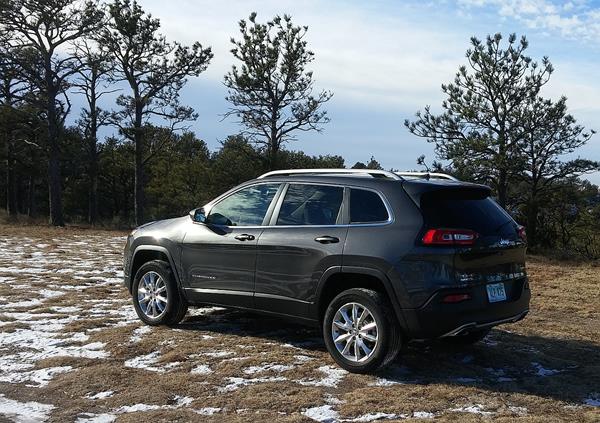 The current design for the Jeep Cherokee was introduced in the 2014 model year and has been a bit polarizing with buyers. Reactions have been mixed, but largely positive towards the new look of the Cherokee. It's a mixture of forward-looking newness and nostalgic throwback, with the latter coming from the slotted grille and the former coming from the sleek headlamps, and low-slung hood and windscreen.

The Cherokee has taken on a generally contemporary form, with a lower hood, flattened nose and sporty body design reminiscent of a car - all crossover hallmarks. The Cherokee retains its high ground clearance, slightly overlarge wheel wells and muscular stance to denote its status as an SUV.

A high greenhouse accentuates the strong muscularity of the Jeep Cherokee. Wide rear doors and a squared hatchback opening make for the impression of easy ingress and egress from the vehicle as well, boosting its family credibility.

The overall look is good, but polarizing enough to push some buyers away.

Inside, the 2017 Jeep Cherokee is roomy and full of quality materials and design. Seating in front is very adjustable, even in the base model. Including height adjustment - a rarity at the low end. The dashboard has a unambiguous, flowing design that accommodates the large infotainment screen (found in all but the base Sport model) and well-placed controls nicely.

The instrument cluster is easy to read and well-designed as well. Steering wheel controls are straightforward, though it does take a moment to remember whether the left or right side behind-the-wheel toggles change the station or volume (left is station/menu, right is volume). 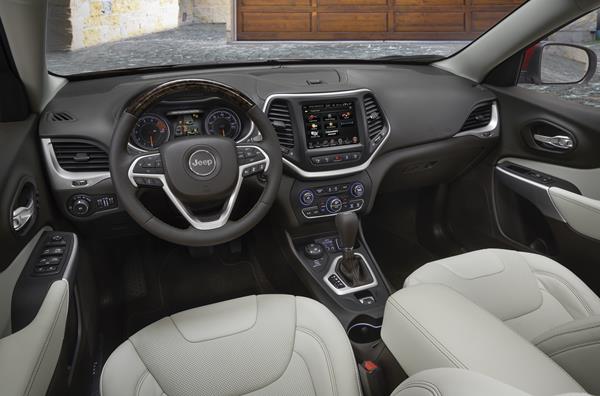 The rear seats are much more adult friendly and commodious than most compact crossovers can boast. The slide-recline nature of the seats, though somewhat limited, is a welcome boon to comfort. Stadium-style seating means that the rear passengers can see through the windscreen better and don't have thigh ache upon arrival. In all, it's very nicely done in the rear.

Cargo space is where the Jeep Cherokee pays for its large second row. The payoff is generally a good one, though. Cargo space is 24.6 cubic feet with the rear seats up and 54.9 cubes with them folded. This is far less than most in the compact crossover class, but not by so much that most buyers would miss it. There is plenty of floor space and a lot of handy tie-downs and bag clips in the back of the 2017 Cherokee. So the space may be somewhat smaller than others, but it's still very useful.

Technology in the 2017 Cherokee is centered on the infotainment screen powered by Chrysler's Uconnect system. In all but the base Sport model, the 8.4-inch Uconnect screen offers a well-done touchscreen interface with bright graphics and easy-to-use menus. The virtual buttons are large and an additional control knob for faster paging through some options are very intelligently presented.

In upper trims or with added packages, more of the Uconnect system, such as the highly useful speech-to-text feature, are added. Navigation and other systems are about par for the industry but often easier to use because of the slick interface. Voice commands and controls are also well-done, though sometimes tedious. Especially when the user knows the command they wish to use but is forced to sit through the menu's read-out anyway. 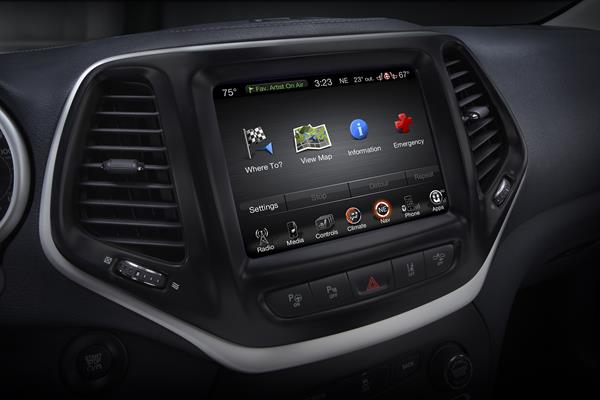 Fuel economy in the 2017 Jeep Cherokee is good on the whole, but a bit lower than the class average. Especially in the 2-wheel drive models with the lower-end engine option.

A front-wheel drive Cherokee with the 4-cylinder base engine is EPA-rated at 25 mpg combined, with 21 mpg in the city and 30 mpg on the highway. With the V6 upgrade, the EPA rating drops to just 24 mpg combined (21 city, 29 highway). The latter speaks well of the 9-speed automatic transmission that is standard in the Cherokee.

Four-wheel drive models are a bit below the average for this segment's offerings, which are largely all-wheel drive rather than true 4WD. The 2017 Cherokee 4WD with the 4-cylinder engine is EPA-rated at 22 mpg combined. With the V6, that goes to 21 mpg combined.

In the real world, our 2017 Jeep Cherokee equipped with 4WD in the Trailhawk model saw about 20 mpg all told. So the EPA numbers are close to real-world expectation. This has been born out in the past with other Cherokee same-generation models we've driven.

Largely unchanged from the previous model year, we expect that the 2017 Cherokee will receive a similar J.D. Power and Associates rating for dependability. That rating last year was "About Average."

The NHTSA has issued one safety recall for the 2017 Jeep Cherokee's knee bolster airbag. It has otherwise seen no mechanical recalls, as of this writing.

The 2017 Cherokee did well in crash testing from both the National Highway Traffic Safety Administration and the Insurance Institute for Highway Safety. Scores could have been better, averaging four stars in most of the NHTSA's tests and a best "Good" in all but one of the IIHS' tests, but were overall very good. Other competitors outrank the Cherokee in this class and have set a higher expectation for safety than the Cherokee is delivering in this current generation. 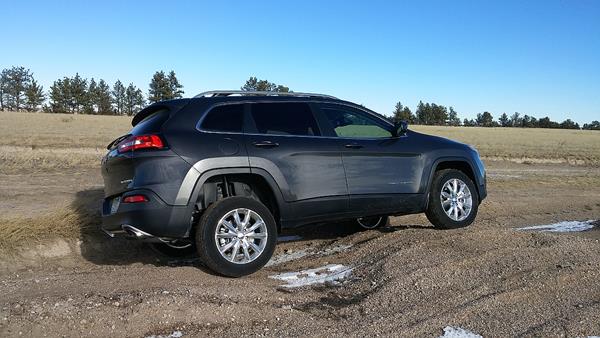 The 2017 Cherokee has both a 4-cylinder and a 6-cylinder engine option. A 9-speed automatic transmission is the only transmission available. Front-wheel drive is standard with two 4-wheel drive options available: a light-duty Active Drive I and more rugged Active Drive II system with low-range gearing and a locking rear differential. Both 4WD systems have a selection dial for choosing terrain modes. All models of the Cherokee can have any of these three drivetrain options with the exception of the Trailhawk model, which is 4WD only.

On the road the 2017 Jeep Cherokee is comfortable and well-mannered. In most editions the ride is smooth and surprisingly quiet. The 4-cylinder engine will struggle in some situations, such as when burdened and going uphill or to gain speed quickly in a pass, but is very acceptable for this vehicle in most scenarios. The 6-cylinder is confident and quick, as it should be. The Trailhawk model is a bit louder on the road, thanks to its tougher suspension and more aggressive tire tread.

Off the road all Cherokee models are astute for the class. With the extra ground clearance that the 2017 Cherokee has over most of its competitors, it's usually going to rank best-in-class for offroading, even with only FWD to power it. In 4WD, there are few that are comparable for their dirt-loving prowess, especially against the surprisingly excellent Trailhawk model with a V6 under its hood.

The 2017 Cherokee's base price is a bit higher than average for the segment, but most buyers will look past the Sport model into the mid-range trims (as with most vehicles) and will there find a better value in the Cherokee. A base Sport model and basic Altitude trim upgrade can be found for about the same price with interior accouterments being much more appealing in the Altitude. Adding 4WD is about $2,000 more for any model, but the capability added is far beyond what most other crossovers in this class have for their AWD offerings.

Most of the value of the Jeep Cherokee will come from its combination of versatile capability and roomy passenger space. In that regard, the Cherokee is a great choice. For fuel economy or cargo room, buyers need to look elsewhere. 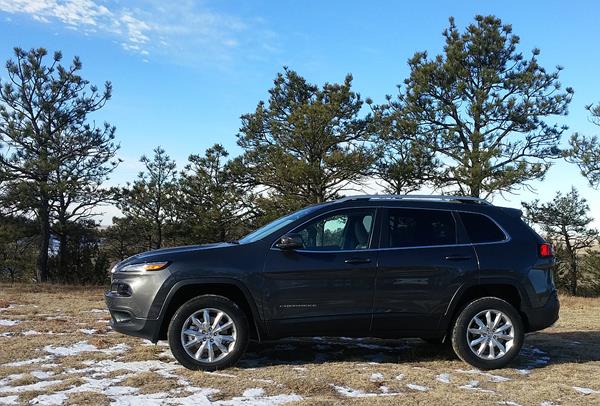 The compact crossover segment is one of the fastest-growing segments in the industry. So the 2017 Cherokee has plenty of competition. The best-selling Honda CR-V is always worth a look, but has neither the compelling looks or excellent off-road credibility of the Jeep Cherokee. The Toyota RAV4 is a good option as well, though it's smaller on the whole, but we do like the fuel-sipping Hybrid option. The Mazda CX-5 and Ford Escape are both fun-to-drive alternatives with better fuel economy, and the very capable Subaru Forester is all-around a great family hauler and adventure seeker.

The 2017 Jeep Cherokee continues with the excellence that the new Jeep brand has been offering. Building on a past filled with legendary off-pavement capability, the Cherokee moves forward into a pavement-friendly future that doesn't lose that off-road cred. In all, the 2017 Cherokee is well worth keeping on your cross-shopping list.