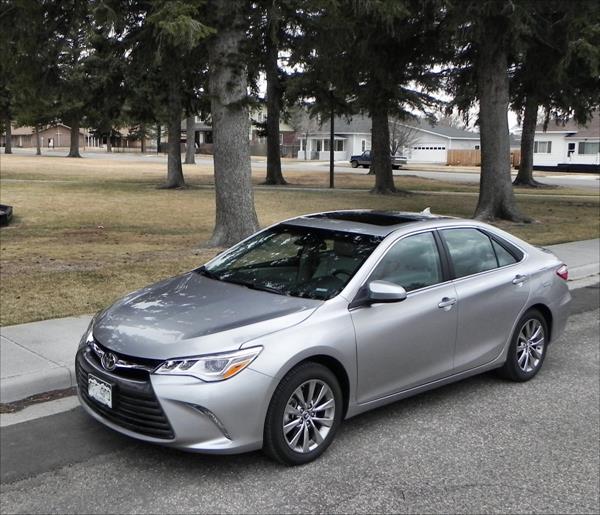 Overview (Final Score: A)
The 2016 Toyota Camry carries the sweeping changes made to the best-selling sedan last year. A new Special Edition model joins the lineup for added bling factor, but the five-seat sedan otherwise remains the same. For most buyers, this is a good thing.

The 2015 model year brought huge changes for the once-staid Camry, adding a lot of eye-pleasing looks and building on the already-great interior of the previous version of the car. Now, with both comfort-oriented and sport-tuned options, the 2016 Camry comes in no fewer than six model and trim options. The base-level LE builds a foundation upon which the sporty SE and XSE models build and from which the SE and XLE trims flourish.

Whether you want comfortable and quiet or sporty and fun, the Camry's got an option for you. The Camry's reputation for being the epitome of boredom is shed.


What We Loved About the 2016 Toyota Camry


What We Didn't Love About the 2016 Toyota Camry 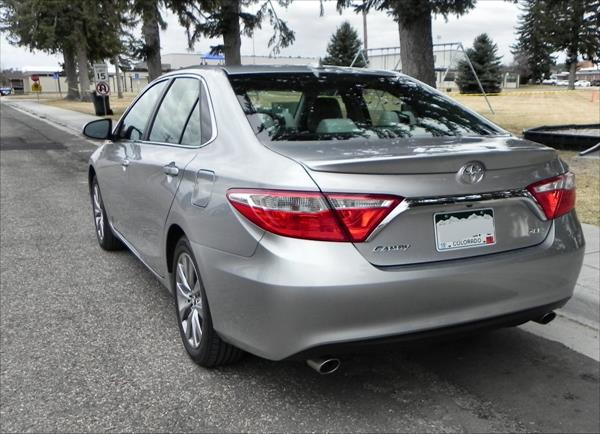 Exterior View (8/10 relative to market)
After the Camry's revamp last year, the car became much more contemporary and sporty-looking, with plenty of curb appeal added on. The front fascia is more aggressive with a single-bar grille riding atop a wide mouthed lower intake flanked on either side by LED fog lamps (on some trims). The hood dips low into the grille and runs in an arch around either side, over the fenders, with pronounced humps on either edge and a faint line running up its middle.

The humps begin the pronouncement of stronger fenders with wheels sitting at a wide stance below. The pillars mark a fast-paced windscreen running to a coupe-like roofline. Underneath, a character line follows the beltline above and an upward-tilting swoosh cut on the lower doors adds motion to the side panels. Premium marks such as the dimple flowing through the gas cover to the rear taillamps and the added trim below the pillar cut at the rear are nice touches.

The back side of the 2016 Camry holds a lot of lines to accentuate a higher amount of design flow, with wide lamps, chrome accents (on some trims), and a wide, low scoop for the deck lid opening to give easier access to the trunk when open.

The overall look is more premium, upscale, and sporty than the Camry's ever looked before. The Camry has long been a best-seller in the midsize segment and these upgrades to its look are proving to be popular, keeping it on top.

The new Special Edition trim level for this year hopes to capitalize on the Camry's newfound success as a sportier sedan by adding exterior elements like big 18-inch wheels, smoked tail lights, and other additions. 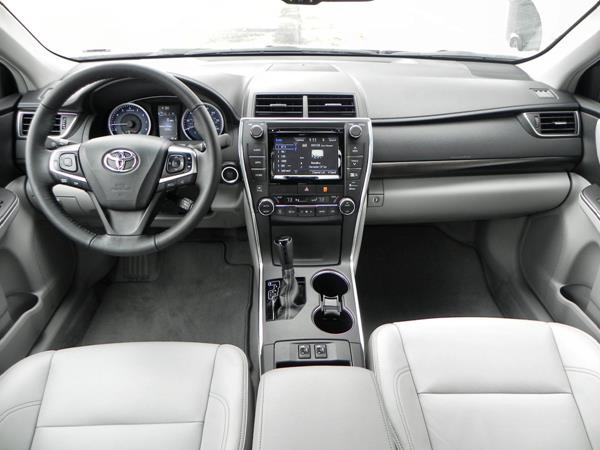 Interior Comfort, Quality, Ergonomics (10/10)
Without hesitation, we mark the 2016 Toyota Camry as having the best interior, overall, in the midsize segment. It's comfortable, spacious, and ergonomic. Tall adults can sit in the front or back without complaint and the trunk, though only of average size, is very accessible thanks to the wide, flat bottom.

The dashboard flows through the front of the cabin gracefully, with multiple tones and a wave-like movement about it. Controls are well-placed and, for the most part, canted towards the driver for easy access. Large dials on the most commonly-used items are a nice touch. Simple and intuitive seem to be the two words that Toyota's interior designers took to heart when building the Camry's insides.

From the base model LE with its ample standard equipment to the upper crust XSE and XLE, the Camry delivers a best-in-class interior experience.


Technology (8/10)
The 2016 Camry comes standard with a 6.1-inch touchscreen interface that some trim packages upgrade to 7-inches. These are loaded with the Toyota Entune infotainment system, which offers basic functionality at the base level, and builds up as trims and packages are added. The full Entune Apps Suite is available as an option on most trims and as standard on some, bringing full smartphone integration and Internet-enabled applications via the Entune app on the user's phone.

Entune is one of the best systems in the business, being a far cry from the Toyota offerings just a couple of years ago. It's much more intuitive and easy to use than it's been in the past. It enables options such as Bing, Yelp, real-time traffic for navigation, and more.

In the midsize segment, however, competition in infotainment is thick and many rivals have equal or better infotainment options with bigger screen and similar or more functionality. Toyota has not been left behind here, but is certainly finding itself in the thick of things competitively speaking.

The Camry also offers an extensive suite of safety-oriented technology as well, including advanced collision mitigation and more. 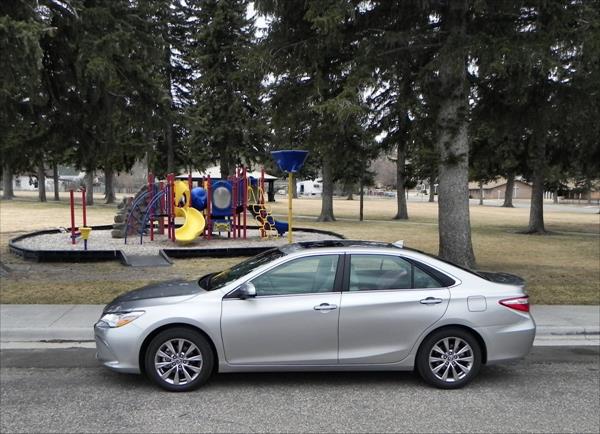 Fuel Economy (7/10)
Where the 2016 Camry may be weakest it is in fuel economy. The four-cylinder option delivers 28 mpg combined, per the EPA, with 25 mpg in the city and 35 mpg on the highway. A few rivals top this handily with their four-cylinder options, mostly thanks to turbocharging and better tuning.

The V6 offers 25 mpg combined, 21 city and 31 highway. This is average for the segment in V6-powered options.

The Camry Hybrid boasts best-in-class MPG, however, at 43 mpg in the city and 39 mpg on the highway.


Predicted Reliability, Initial Quality Ratings (10/10)
Although no ratings for the 2016 model year are yet available for the Camry, it's largely unchanged from the 2015 model year, in which it received top marks. J.D. Power and Associates gave it a top rating of "Among the Best" in its Vehicle Dependability Study and the 2015 model year, despite the heavy upgrades for the car, saw only one safety recall.

With the expected reliability and Toyota's solid reputation for quality and dependability, we give the 2016 Camry top marks here. 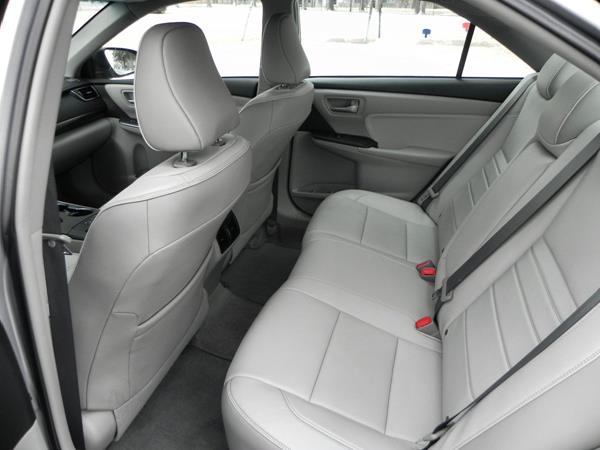 Safety (9/10)
The 2016 Toyota Camry does very well in the safety department. The National Highway Traffic Safety Administration has given it a 5-Star overall rating with four stars for frontal crash tests, five stars for side impacts, and four stars for rollover protection. Similarly, the Insurance Institute for Highway Safety will likely award the 2016 Camry a Top Safety Pick Plus award this year as it did last year, with the 2016 model receiving tops scores of "Good" for every test conducted thus far, including the small-overlap front test.


Performance (8/10)
The 2016 Toyota Camry continues with its 2.5-liter four-cylinder base engine that produces 178 horsepower and 170 pound-feet of torque. A six-speed automatic transmission and front-wheel drive are standard.

A more powerful 3.5-liter V6 rated at 268 hp and 248 lb-ft of torque is offered in some upper trims. It's also mated to a six-speed automatic transmission and is front-wheel drive. Many will find that this engine is surprisingly quick for the class.

A hybrid variant is also available.

The 2016 Camry is a much more engaging drive than the Camry has been in the past. The updates last year brought better suspension tuning, a slightly wider wheel track, and more responsive steering input. Some trims accentuate this even more, with the sporty SE and XSE adding more sport tuning to the suspension and peppier throttle response times. Meanwhile, the other models continue with the Camry's tried-and-true comfort-oriented driving experience, allowing the long-term Camry fans to keep what they like about the car going forward.

This balancing act between the more staid expectations of repeat Camry buyers and gaining the interest of newer, younger buyers has so far proven to work well for Toyota's Camry. The mid-size sedan continues its dominance as the segment's leader and proves that, sometimes, you can please everyone. If you really try.

On the road, the 2016 Camry is a solid get-there mobile, but it now offers more interest for the driver. Comfort and a quiet interior are still the focus and the Camry still delivers on those fronts. The four-cylinder engine offers respectable fuel economy, but can struggle when pressed up a hard incline or when passing on the freeway in comparison to the much more robust V6. The transmission on either engine is a much better experience, shifting smoothly and quietly in most situations. 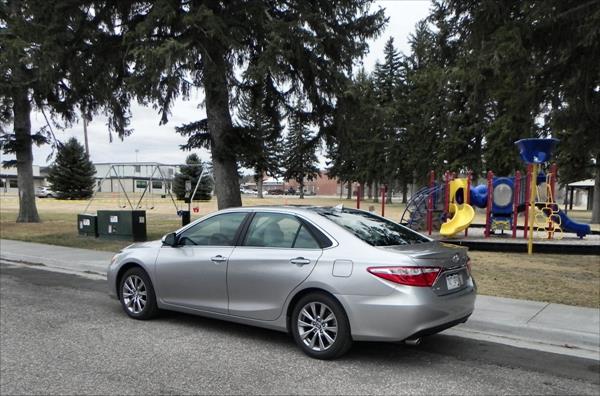 Pricing and Value (8/10)
The 2016 Toyota Camry is a bit more expensive than some rivals when price and packaging are compared. On the other hand, it enjoys a good resale value retention and a good market for used car purchases. This tends to help even out the sticker shock for a well-equipped model off the showroom floor.

The mid-level packaging for the 2016 Camry is most compelling on paper and offers a decent value for the dollar. Some rivals might have better options for less money, but again, the Camry's dependability and expected resale might win out.

Buyers will want to keep abreast of the incentives Toyota may be offering at any given time of year or in certain regions. These often add a lot of bang for the buck when purchasing a new Camry.


Total Score and Competitive Comparison (68/80, 85%)
We rank the 2016 Camry as a solid "A" choice in the midsize sedan segment. Rivals such as the Chrysler 200, Mazda Mazda6, and Ford Fusion offer strong competition, however, and should be considered when shopping in this segment. The Hyundai Sonata is another great choice, offering style and sophistication with new packaging making it a compelling value offer. In all, there is no shortage of A-list competitors to choose from in the midsize segment as this hotly-contested, high-selling segment continues to be the proving grounds for manufacturers' best offerings.

The 2016 Toyota Camry is a solid choice, however, with a much better look and stronger curb presence than it's ever had before. With a top-shelf interior and excellent array of trim options to choose from, it's easy to see why the Camry remains the market's leader.