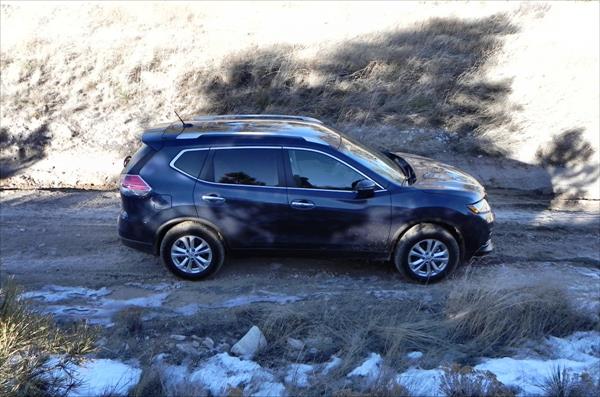 Overview (Final Score: A-)
The Nissan Rogue saw a complete redesign in 2013 and was immediately applauded for its family friendliness and comfort. That remains today, with only small upgrades having to be made in the intervening years. This year, the Rogue sees its telematics system (NissanConnect Services) being added to its top trims. Siri Eyes Free also enters with the base level touchscreen system as well as the upgraded option. Finally, safety upgrades are also added as options for advanced emergency braking.

There is a lot of competition in the small and compact crossover segments. Many excellent entries can be found, but with a third row option, the Rogue stands apart and enters a small league of offerings that many families will find compelling. It's upscale interior will likely make up for forgettable exterior looks. To go with that, driver and passenger comfort is premium level, well beyond what most others can offer. We should note that performance-wise, the Rogue is not a top choice, but most buying in this segment aren't interested in road hugging speed.

Small families will enjoy not only that third row option, but the large amount of usable cargo space and the high fuel economy potential this vehicle has. The Rogue offers a lot to those who need a versatile family hauler that won't break the bank or outsize compact parking spaces.


What We Loved About the 2016 Nissan Rogue


What We Didn't Love About the 2016 Nissan Rogue 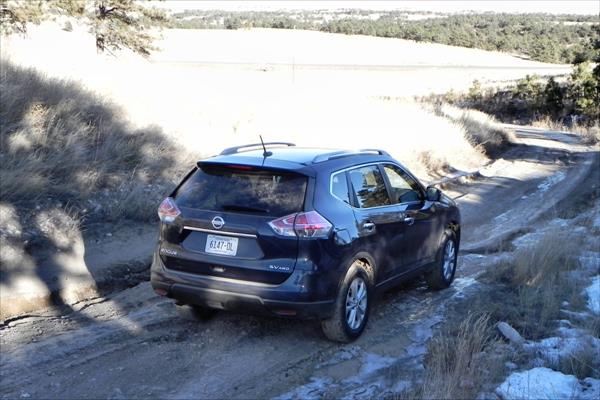 Exterior View (8/10 relative to market)
The Rogue has a look that neither dazzles nor disappoints. From its unassuming "V-motion" front grille to its contemporary, sporty styling, the Rogue is a good-looking, but not stand out vehicle in the parking lot.

There are highlights worth noting, though, including the Euro-swoosh rear pillar, the fast-paced windscreen angle, and the rounded rear hatch with its integrated spoiler above. The integrated roof rack on some models and some of the wheel options are also high points.

The overall appearance of the 2016 Rogue is that of a contemporary crossover with a bit of Nissan style to set it apart. Most of that happens in the front grille and the homage to saloon styling that the company has been pushing forward with through its cars and crossovers. Being about halfway through its expected generational life, we think the Rogue is beginning to show some age on its exterior, but this little crossover's selling points are not based on looks. It's more substantial than that.

In the main, the 2016 Nissan Rogue is a nice looking, but generally forgettable crossover in a segment full of good looks and strong competition. 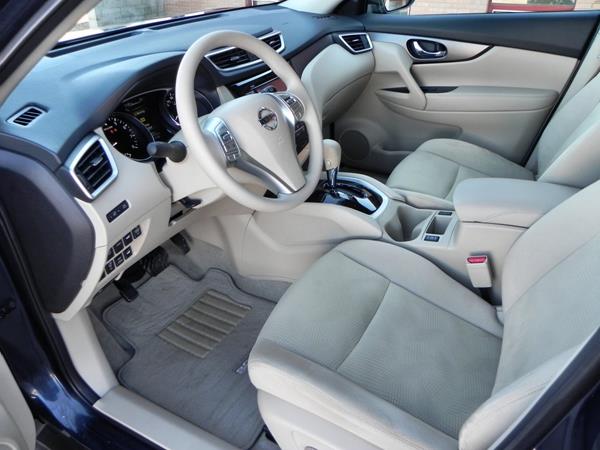 Interior Comfort, Quality, Ergonomics (10/10)
The 2016 Rogue has a lot of excellence in its interior with some of the best seating in its class and a layout worthy of a premium-level crossover. Add in the excellent cargo organization options or the usable third row and you have a very versatile small crossover.

The front seats in the Rogue are, by default, Nissan's "Zero Gravity" seating which they say were inspired by designs for seats made for NASA. These are easily the most comfortable seats you'll find, including those in premium brands. Legroom is good, even for tall folks, and headroom is on par with the class. Shoulder room is also very good.

The second row of seating is some of the best in the class. Not only are the outboard seats the same Zero Gravity as the front, but the 40/20/40 split-fold seats (standard) have nine inches of forward and back travel and reclining seatbacks. You won't find that very often in this segment.

The third row option is only for kids, but is useful in that regard and configured low enough that forward-facing child safety seats will fit easily. These seats fold flat when not in use. When all seats are folded down, the Rogue features 70 cubic feet of cargo space. That's more than most. Speaking of cargo, in models without a third row, a useful multi-level shelving system is included in the cargo area of the Rogue to give a lot of options for storing and protecting cargo. Another unusually upscale standard feature in the Rogue. 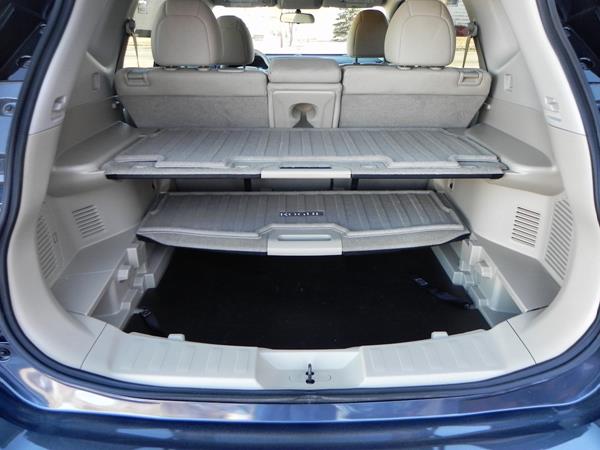 Technology (9/10)
Technology in the 2016 Nissan Rogue centers on a 7-inch touchscreen that becomes standard equipment in the mid-level SL trim. This comes standard with voice controls, navigation, and SiriusXM-powered telematics for safety. Siri Eyes Free is also standard. Most of the expected items are there with this system, though upgrading to a larger screen is a good option for the next trim point. That upgrade adds Nissan's excellent AroundView camera system for 360-degree views around the vehicle when backing or parking.

For the most part, technophiles will be the only ones who're disappointed with what's in the Rogue. For the rest of us, the technology options are intuitive, require very little learning curve, and work well. Streaming and connectivity are available. 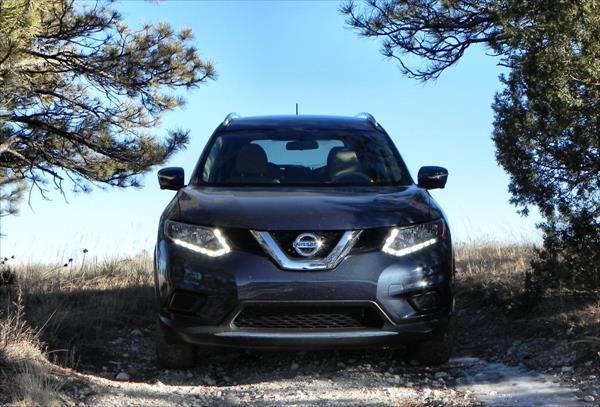 Predicted Reliability, Initial Quality Ratings (8/10)
The 2016 Nissan Rogue is rated by the J.D. Power and Associates Vehicle Dependability Study as "About Average." Nissan as a whole has been improving in its reliability ratings in recent years. There have been only two recalls for the 2016 Rogue, one for an airbag defect and one for the liftback support.


Safety (9/10)
The 2016 Rogue has scored well in safety tests. The Insurance Institute for Highway Safety has given it a Top Safety Pick status with scores of "Good" on all of the Rogue's crash tests. The National Highway Traffic Safety Administration gave the 2016 Nissan Rogue four out of five stars on most of its tests with a full five stars on the side impact crash test.

There are a lot of built-in safety features in the Rogue that come standard as well as many additional upgrades for active and passive driver safety aids.


Performance (7/10)
One area where the 2016 Rogue is not a notable is in performance. A four-cylinder engine is the only option with this crossover, offering 170 horsepower and 175 pound-feet of torque through a continuously variable transmission (CVT). Front-wheel drive is standard and all-wheel drive is an option on most trim levels.

Out on the road, the Rogue won't win any checkered flags or dazzle anyone with its cornering or 0-60 times. It is sufficiently motivated for most needs and most drivers, but those desiring a connection with the road will need to look towards sportier options.

We do note that the standard backup camera makes up for the Rogue's inherently bad rear visibility. Otherwise, this is an easy vehicle to maneuver around town. On the highway it's quiet enough for most and handles itself well. Seating and a good ride mean comfort on the road whether the trip is short or long.


Pricing and Value (9/10)
The Rogue includes a lot for the price paid. With its low starting price and an average purchase price staying under $30,000, there's a lot to love about what's included with the well-adorned Nissan Rogue. We like the interior, the excellent seating, and the high economy of the Rogue for sure and buyers seem to feel that way as well.

We recommend staying away from the base model and moving into a mid-level trim such as the SV or SL for the best bang for the buck. 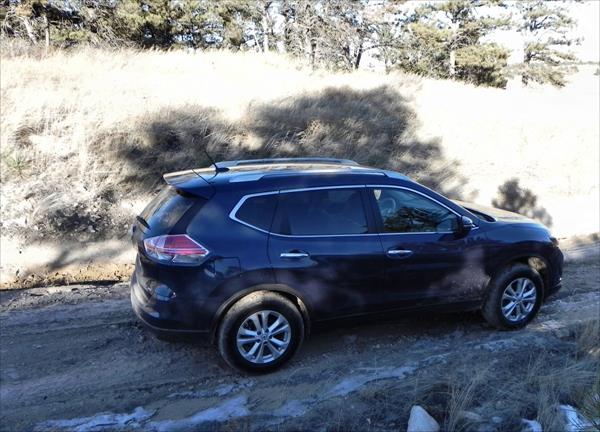 Total Score and Competitive Comparison (69/80, 86%)
There is a lot of competition in the compact crossover segment. The Mazda CX-5, Honda CR-V, and Subaru Forester are all worthy contenders. The Mazda is more fun to drive, the Honda has more room, and the Forester is more competent when the weather turns sour. All of these offer excellent family ergonomics, but the Rogue is easily the most comfortable of the group.

For its combination of space and comfort, though, the 2016 Nissan Rogue is difficult to beat. It's value proposition and solid fuel economy returns are also high notes. In short, the Rogue should be on every compact crossover shopper's list.