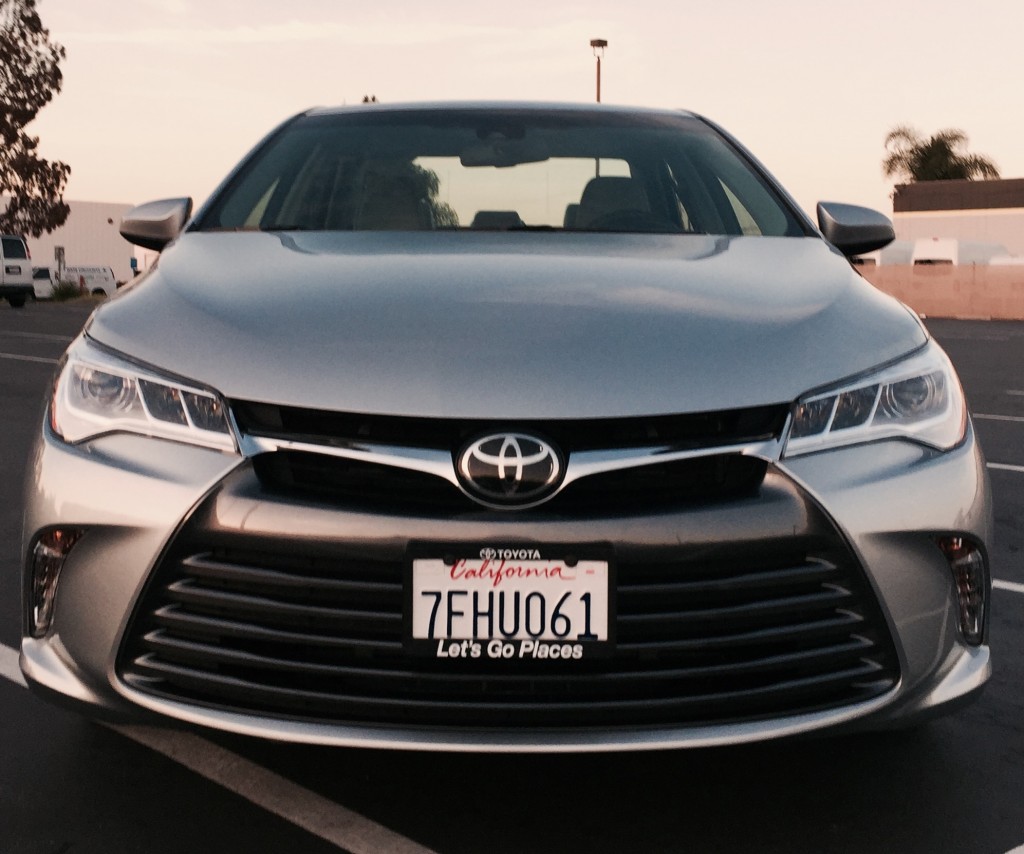 
Overview (Overall Grade after 8 Categories: A -)

The Toyota Camry family sedan was heavily revised for the 2015 model year with over 1,000 changes made meaning this was more than just a mere midlife model refresh. So despite the fact that its powertrain offerings are pretty much carried over with the 2.5 liter 4-cylinder, Hybrid and our tester's stout 3.5 liter V6 all on offer we couldn't help but feel like we were driving something altogether new in the 2015 Toyota Camry. And we think it has to do with more than just the elegant and lovely new steering wheel that Toyota has fitted to all Camry models.

Apparently Toyota changed every exterior body panel but the roof of the Camry and it shows in how little it resembles last year's reserved and rather dorky looking version. Well, looking at the 2015 Camry the old one looks a little frumpy as does the heavily upgraded, stylized and nicer feeling interior. Toyota also added a number of safety and technology features as well as tinkered with the suspension and steering for a more involving drive. Clearly Toyota was aiming directly at our two class favorites the Honda Accord and Mazda6 so we ask, did they hit the bullseye? Read on to find out. 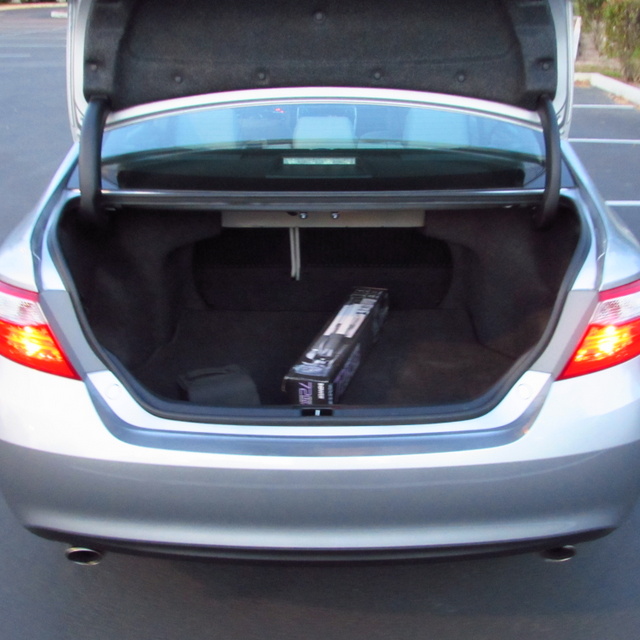 What we loved about the 2015 Toyota Camry XLE V6 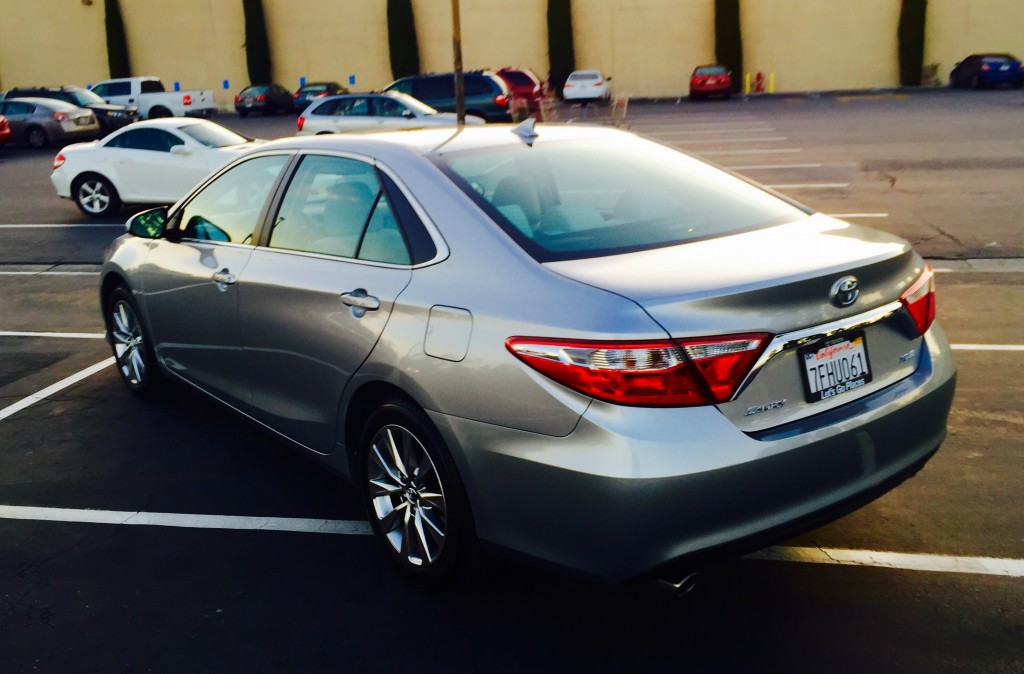 Now we didn't really think there was a whole lot wrong with the way last year's Camry looked but when parked side by side it is easy to see how much more stylish, sleek and modern looking the 2015 version has become. There is even a new sporty XSE trim level (the V6 is available only one XLE and XSE trims) that boasts body spoilers and racy visual enhancements that are actually backed up by changes that tighten up the steering, handling and speed up shift times. That's a long way to go to make the Camry drive like the XSE promises it should and it is something we always knew Toyota could do.


Interior Comfort, Quality and Overall Ease of Use (10 out of 10)

The inside of the 2015 Toyota Camry isn't as vastly different as the exterior but somehow the dashboard feels much less complicated and the plastics and leather used throughout the interior of our luxury XLE model were top notch—they wouldn't be out of place in a premium brand car. We did not say a Lexus. There are plenty of premium brands out there that are no better in perceived interior quality than the one in the new 2015 Toyota Camry XLE V6.

Since not everyone is blessed with 20/20 vision Toyota saw fit to make most of the major button and knob controls quite large on the center dash and each one is illuminated and marked in large type. Some may say that will appeal to the average Camry buyer because they are older but to us it is a safety enhancement that anyone can get into a 2015 Toyota Camry, start the engine and drive off without becoming totally distracted as they try to adjust the climate control and the stereo on the move. It helps them keep their eyes where you want them—on the road ahead. 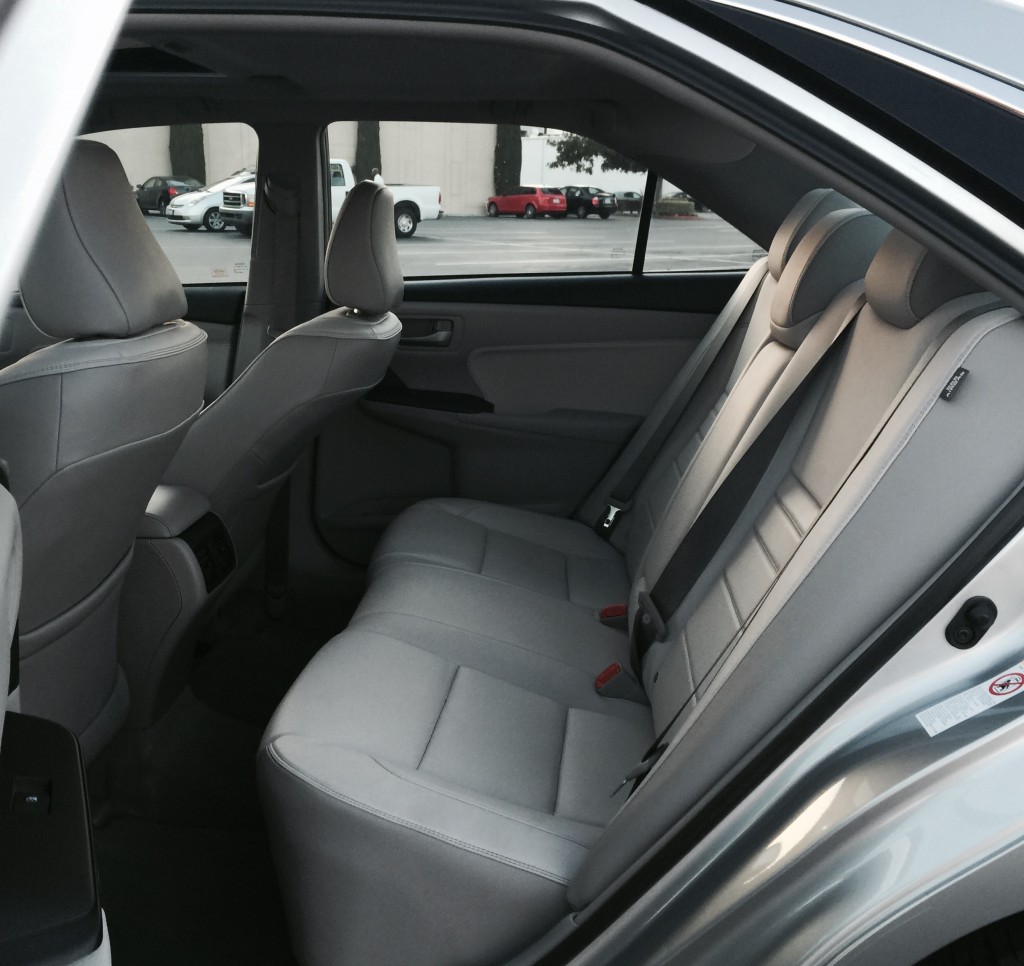 If ever there was a user friendly infotainment interface as easy as the one that the 2015 Toyota Camry XLE V6 boasts under the name Entune, we have yet to see it and we test most everything under the sun. First off, the center screen is large and angled nicely to keep midafternoon glare from the sun at bay. Access to different functions is easy thanks to large, easy to read touch screen buttons as well as secondary button controls alongside the screen that are also very easy to find, touch and read. Not everyone has 20/20 vision and perfect hand eye coordination. Using every feature in the Toyota is an intuitive affair that even someone who has never sat in the car before can master in under a minute.

And honestly, shouldn't technology exist to make driving safer and easier for us? And there is nothing more frustrating than having to take your eyes off the road and squint at a poorly marked touch screen just to adjust the temperature. Or play a song from your iPod. Or change your destination on the navigation screen. You get the point. Entune is easy to use, quick to react and very customizable so you can reach your most used functions quickly. A great system from Toyota constantly being made better. 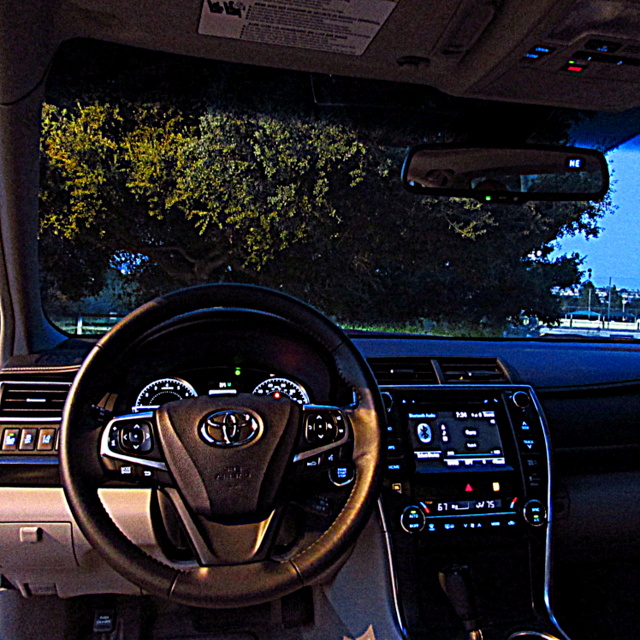 Highly impressive are the 3.5 liter 268 horsepower/248 lb. feet of torque V6 engine's EPA fuel economy ratings of 21 city/31 highway or regular unleaded. But what did we manage in the real world with our led feet and just six-forward gears? Well, apparently those 9-speed automatics aren't good for much other than a lot of hunting for the right gear as we averaged a right on the money 25.6 mile per gallon average over the week in our Camry. This engine is proven bulletproof as is the stalwart gearbox so if you want good fuel efficiency with a proven reliable powertrain, you can't lose with this Toyota V6.


Predicted Reliability and Initial Quality Ratings: (10 out of 10)

Most of the changes to the 2015 Toyota Camry were to its appearance inside and out so that should have no bearing on this model of predictable reliability's ranking as one of the world's smartest family sedan buys. Although there were some slight alterations made here and there, the powertrains were carried over generally unchanged and all three (4-cylinder, Hybrid, V6) have proven to be exceptionally reliable for epic mileages. Despite Toyota suffering a number of recalls in recent years, the Camry has always managed to maintain its image as the twinkling star of quality within the brand. 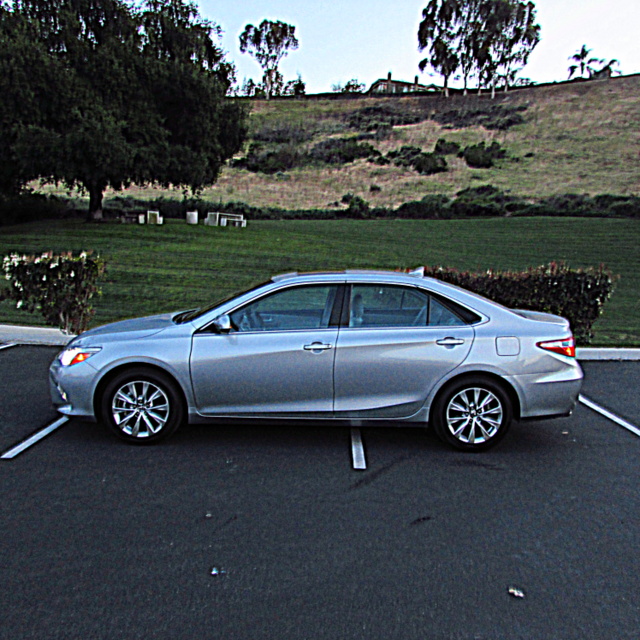 Thanks to a redesign of the front end crumple zones during the 2014 model year, the Camry sedan (with a handy knee airbag) easily passes the tricky IIHS (Insurance Institute for Highway Safety) small front overlap test (meant to mimic impact with a fixed object like a tree or pole) with ease. Also, since 2015 has seen the introduction of more advanced technological safety features (some at least to the options list) like Blind Spot Warning Alert, a rear Cross Traffic safety system, lane departure warning, a pre-impact warning system, standard back-up camera as well as an optional radar cruise control system that handles all of your braking and accelerating by itself on the highway, the vehicle was named a "Top Safety Pick Plus." There is no higher score. Way to go Toyota! Also, the seats were also redesigned for improved whiplash protection no doubt just to piss off Nissan, Chevy, Volkswagen, Honda and every other family sedan automaker. 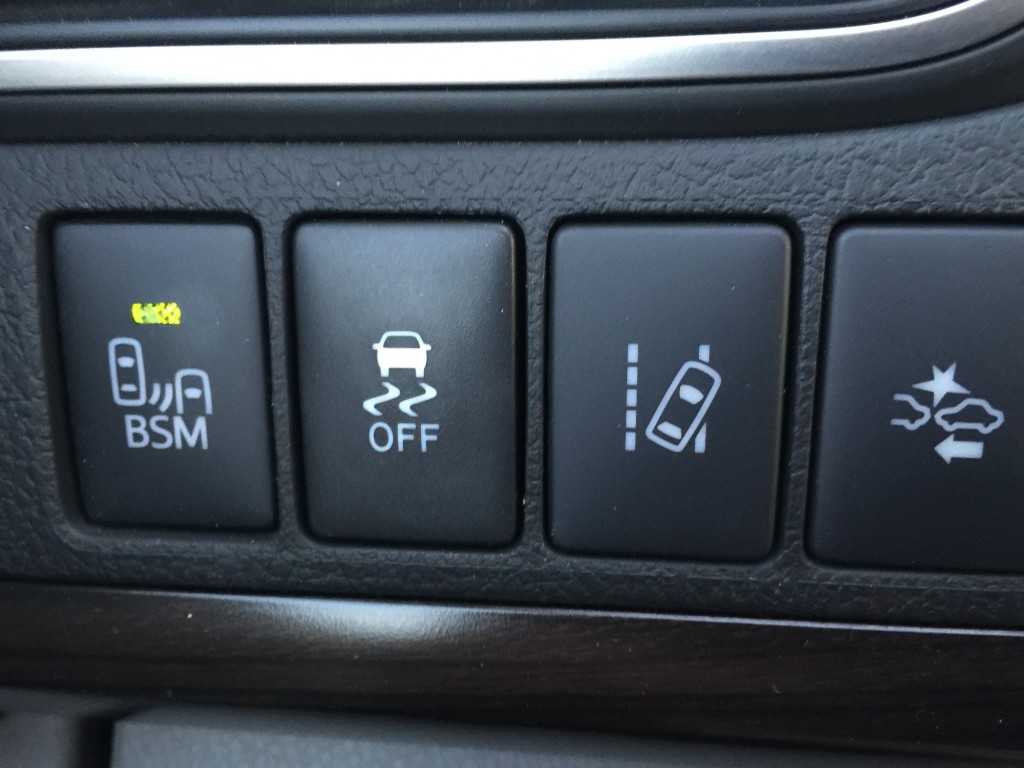 We drove a 2015 Toyota Camry XLE V6 which is supposed to be the more "comfort tuned" luxury variant of this family sedan stalwart. While it does without some of the sportier suspension and steering mods afforded to the more aggressive looking XSE model, we had plenty of fun anyway thanks in no small part to Toyota's exemplary 3.5 liter 268 horsepower/248 lb. feet of torque V6 engine which emits a throaty roar when you are pushing it but is whisper quiet at a cruise. Wind and road noise are also noticeable only by their absence.

Never did we feel lacking in the passing power department thanks to the quick reflexes of the Camry's proven 6-speed automatic and surprisingly we felt the Camry's cornering abilities and steering feel were quite entertaining especially for this segment. Far better than an Altima, that's for sure. So while our XLE V6 tester made easy work of maneuvering crazy mall parking lots, it also managed to help make us feel engaged with the car thanks to the nicely calibrated feel to all of the controls.

For instance, the brake pedal, steering feel and accelerator all seemed to have been tuned together to make it easier for the driver to know how much force to use when giving the Camry a new order. This means someone entirely new to the car can get in it and feel secure that his or her decisions will be acted upon in the right manner without the need for any correction by this very human friendly family sedan. Few vehicles feel this well engineered and while the Camry still isn't an outright sport sedan, it sure felt sporty considering its reputation. Yes, we had fun driving it. We admit it. 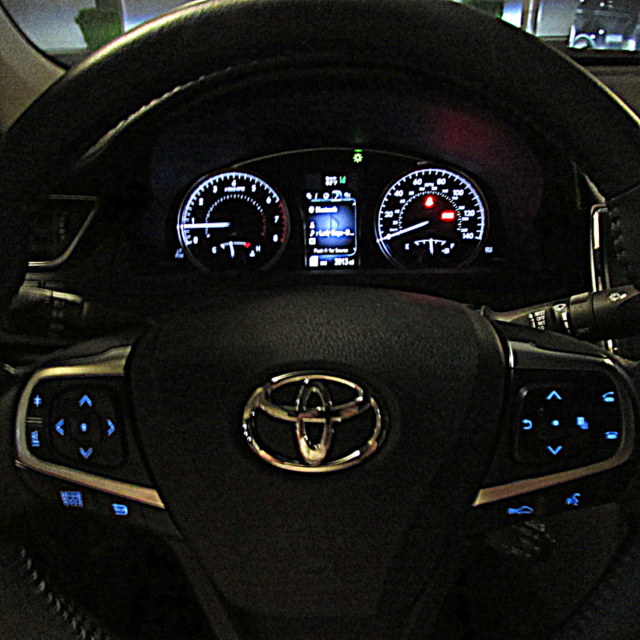 Our fully loaded and maxed out 2015 Toyota Camry XLE V6 stickered for a little over $34,000 which is right on par with competitors like the Accord Touring V6 and even a fully loaded Kia Optima Turbo Limited model. The Kia might have one or two extra bells and whistles but if you are shopping for a family sedan with every feature expect to pay somewhere between $32,000-$34,000 MSRP before any haggling or discounting. This is a very competitive segment so always try to shop around to see what kind of deal you can find.

As far as options go, our XLE came with the $500 blind spot warning and rear cross traffic alert, the $805 JBL Entune premium audio with in-dash navigation package (the sound system returns superlative sound that simply is better than the best available offerings in the Accord or Altima) as well as $750 for a technology package which adds lane departure warning, radar cruise control, automatic high beams and pre-collision alert. Last but not least was a $225 carpeted trunk mat for the roomy 15.4 cubic foot trunk.

If that kind of money is too rich for your blood and don't have your heart set on a 6-cylinder motor then the 2016 Mazda6, especially in iTouring trim at about $24,000, is the one to go for to our way of thinking. It's sportier than any 4-cylinder competitor, has style and more features than you can shake a stick at. And not to beat a dead horse, but you could still get a 2015 Nissan Altima SL V6 for about $2,000 less than the Toyota but you will be left with a cheaper feeling car that will depreciate like a rented boulder off a cliff once you drive it off the dealer lot. Camry models as everyone knows, hold their value. 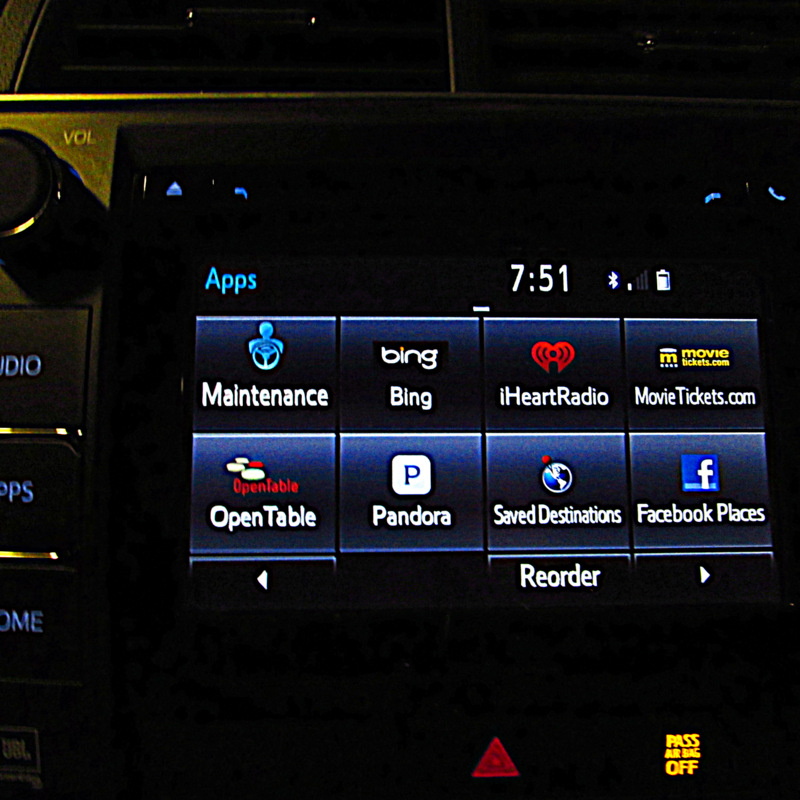 Yes, you read that right. We awarded the 2015 Toyota Camry XLE V6 an overall grade of A minus which is darn near impossible to manage around here. But Toyota so clearly went the extra mile with this extensive redesign and we were more than happy with the results. Lord knows if we had a 2015 Toyota Camry XSE V6 we might have given it a full A score but with that would have come the risk of us going to buy one of our own. It's a bit of an occupational hazard. 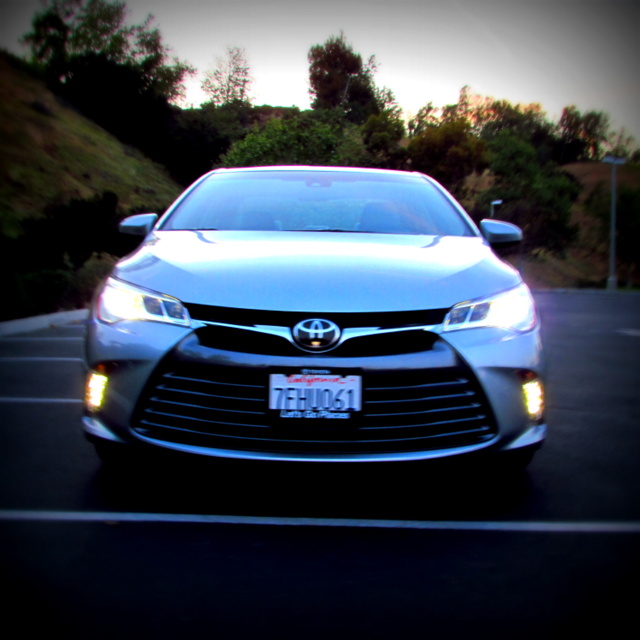