With prices starting at just $28,850, the 2014 Nissan Pathfinder is a generously sized three row family SUV that truly belongs on your shopping list if you carry lots of passengers and cargo on a regular basis but refuse to drive a minivan. For this model year Nissan is introducing a hybrid version with improved fuel economy of 25 city/28 highway and an overall power output of 250 horsepower from a supercharged 4-cylinder and electric motor combination. We have not had a chance yet to drive the Pathfinder Hybrid so the following road test impressions come from a week with a gasoline V6 powered 2014 Nissan Pathfinder SL. 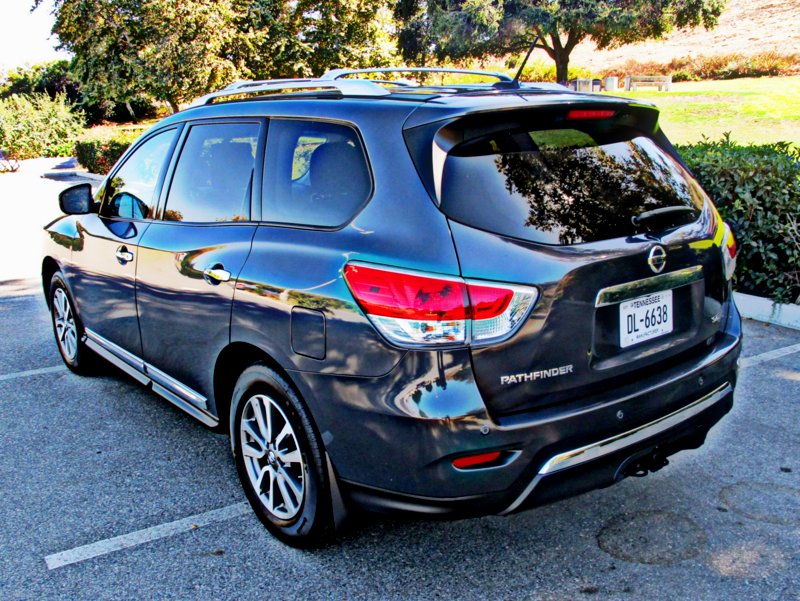 Where once was a square and blocky featureless exterior design, now the latest Pathfinder boasts a truly elegant yet subtly masculine silhouette thanks to the flowing lines along the side and the angular Nissan corporate chrome grille out front. From the rear, the Pathfinder is a genuinely handsome semi-full size SUV that somehow manages to mask how much space it takes up in the world unlike a vehicle like the Chevy Tahoe or Ford Expedition for example. The Pathfinder, much like the Dodge Durango, is styled to appear "right sized" for most suburban environments and it will never overwhelm you garage or your neighbor's view out from their front window.

Thanks to those flowing character lines along the Pathfinder's sides, this SUV is also able to visually raise up its rear haunches and enjoy a flowing air that naturally progresses into a pair of handsomely executed tail lamps. In our opinion this, thanks also to the chrome door handles and our SL tester's stylish 18-inch alloy wheels, is the best looking SUV Nissan has on the market right now. This is probably why the upcoming 2014 Nissan Rogue looks a whole lot like a shrunken Nissan Pathfinder. 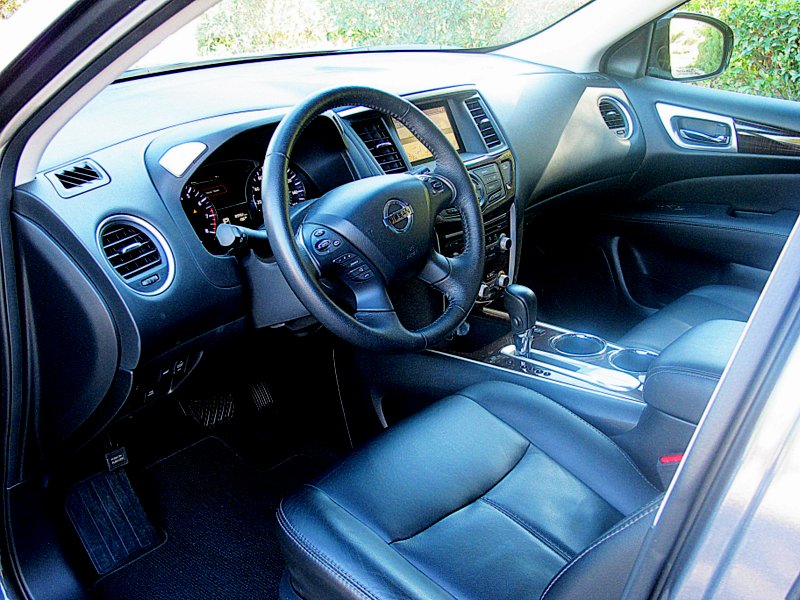 accents and realistically subdued looking wood trim. But upon further reflection and after allowing our canine road tester into the back seat area with no seat cover, we realized that actually living with this interior hue in a family SUV might not be so wise in the long run. Just the dog's dirty paws from walking on pavement left the leather with dark marks that required quite a bit of elbow grease to clean off. So if you have pets, kids or dirty friends we recommend you buy your 2014 Nissan Pathfinder with a black interior.

Otherwise, the 2014 Nissan Pathfinder offers SUV buyers a roomy and multi-faceted interior capable of hauling 7-adults or 5-adults and their cargo. Little nooks and cubbies abound in every corner of the Pathfinder so if you have kids you will no doubt find all manner of trash stashed around this SUV's cabin. Additionally, our Pathfinder with the Premium Package also featured a full glass panoramic sunroof which did wonders to aid in how airy the passenger compartment felt when the sun was out. No one will ever complain of claustrophobia even in the Pathfinder's third row seats.

As far as cargo carrying ability goes inside the Pathfinder, this SUV truly does impress. When all three rows of seats are in use there is still a 16 cubic foot space left over for groceries or some mall shopping. Drop that third row flat and the cargo hold grows to 47.8 cubic feet while overall space with the second row also laid flat maxes out at 79.8 cubic feet of space. That should be plenty of room for all of the boxes filled with your oldest child's belongings when you finally decide to kick him out of the house after 37 years. Or perhaps if you just have a lot of junk to take to a Salvation Army drop off station. Either way the Pathfinder will squeeze it all in. 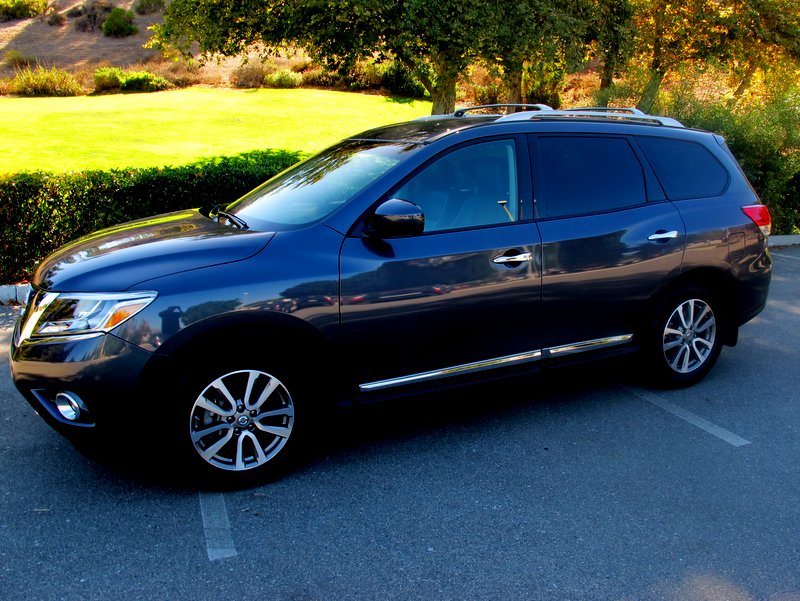 The 2014 Nissan Pathfinder can be equipped with all of the technology that a family could ever need including a navigation system, two rear seat DVD entertainment screens, the clever "Bird's Eye View" around vehicle monitor for those tight parallel parking jobs, tire pressure monitoring as well as an Easy Fill Tire Alert which has the SUV honk its horn once the tires are filled to the right pressure. The 2014 Pathfinder also can be equipped with heated/cooled front seats, a heated steering wheel and smart headlights that turn themselves on in a tunnel or after four swipes of the front wipers.

Predicted Reliability and Initial Quality Ratings (5 out of 10)

Oddly, the 2014 Nissan Pathfinder landed itself on the list of Consumer Reports ten least reliable new cars this year but other than a thin paint issue that the company has since rectified, it is unclear what is causing the quality issues. As the Pathfinder is all new this year, it is impossible to predict its overall long term reliability since the soft roader is now on an all-new platform.

When Nissan went about redesigning its historically truck based Pathfinder SUV for 2013 it decided to make it decidedly more car-like to ride in and drive but somehow they still managed to give this stylish SUV a maximum tow rating of 5,000 pounds which puts it easily up with the leaders in the class. The 2014 Pathfinder also got a full five star crash test rating from the federal government at NHTSA (National Highway Traffic Safety Administration) 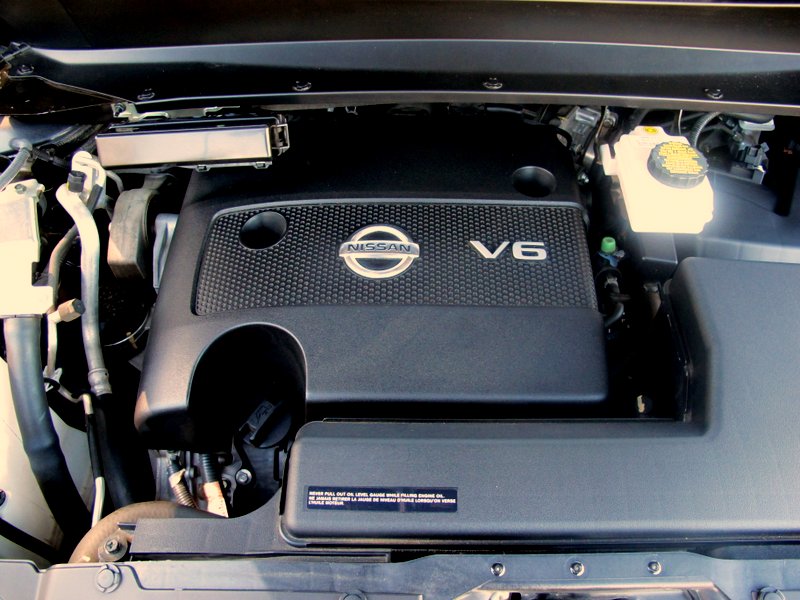 highway and we were very pleased with the 24 mile per gallon average we netted over the course of our week with the family friendly Pathfinder. Add in an extra-large 19.5 gallon fuel tank and you have the recipe for the perfect long distance road trip cruiser. The Pathfinder also runs on regular unleaded.

Our 2014 Pathfinder came equipped with a 3.5 liter 260 horsepower/240 lb. feet of torque V6 mated to a CVT (Continuously Variable Transmission) that stands as one of the most successful pairings of this gearbox to any Nissan product. Power came on smooth and steady from idle and rarely did we ever feel the need to rev the motor all the way to redline to get sufficient power.  The CVT also didn't dull our enthusiasm for Nissan's throaty and muscular sounding 6-cylinder powerplant.

On the ride and handling front that latest Pathfinder is a much smoother and more supple ride than the last incarnation of this off-road SUV legend. Now this Nissan is much farther on the car-like side of the spectrum with little or no jittery thumping or vibrations when driving over rough freeways in Southern California. The steering felt a tad light but in light of how large this SUV is it did offer up decent communication when navigating supermarket parking lots.

Inside the Pathfinder when cruising along at higher than legal Southern California speeds, the Nissan's cabin remains refined and quiet with very little wind and engine noise. Only a little bit of tire roar invades the cabin and this is only noticeable due to the total lack of other noises coming into the interior. Turn up the stereo or put on your rear DVD headphones and the problem vanishes much like the fighting that used to go on in the back of your old dilapidated SUV. 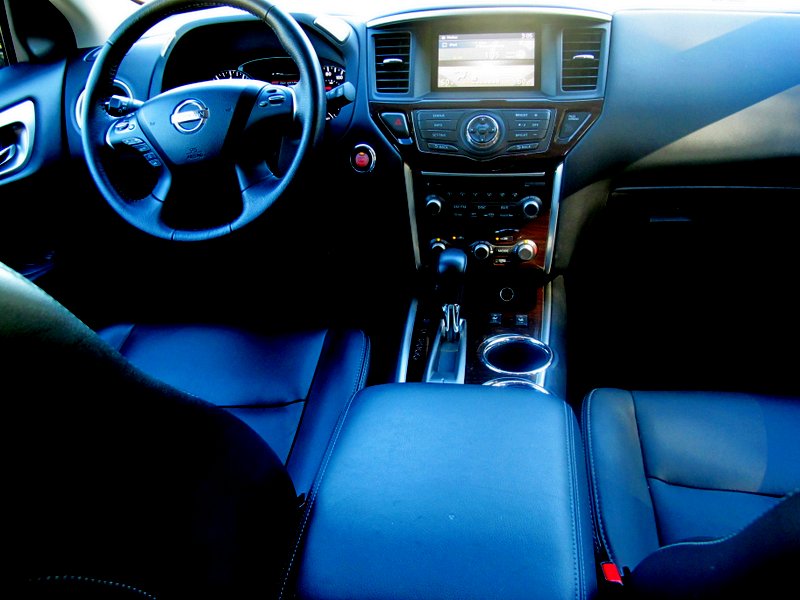 We drove a 2014 Nissan Pathfinder SL with two-wheel drive and minimal options besides a tow package, roof rack, floor mats, and illuminated kick plates for the doors so as to make the interior look more upscale. All in with destination our total MSRP out the door was $36,620 which seemed entirely reasonable given the ability of this SUV and the number of features present like leather seating, remote starting, heated front seats, power liftgate, 18-inch alloy wheels and much more. We experienced no mechanical problems.

The 2014 Nissan Pathfinder SL would truly delight and amaze new SUV buyers from just five years ago but now the competition in this segment is fierce with a revamped Ford Explorer, Dodge Durango, Mazda CX-9, Toyota Highlander, Honda Pilot, Kia Sorento and Buick Enclave just to name a few. All of these entrants bring a new level of sophistication and overall polish to the three row family SUV class. No longer do you have to dig into your wallets deep for an Acura, Audi or BMW because now the mainstream brands offer the same level of hush and elegance inside their cabins.

So while the 2014 Pathfinder may not quite live up to the pizazz of its JX60 from Infiniti cousin, thanks to a leather interior, wood trim and a bevy of available electronic goodies anyone can now buy a luxurious new family SUV from their Nissan dealer. Back in the 1980's when the Pathfinder debuted you would have been hard pressed to notice the luxury under the body on frame hardcore off-road pedigree. Now, it's pretty hard to miss. 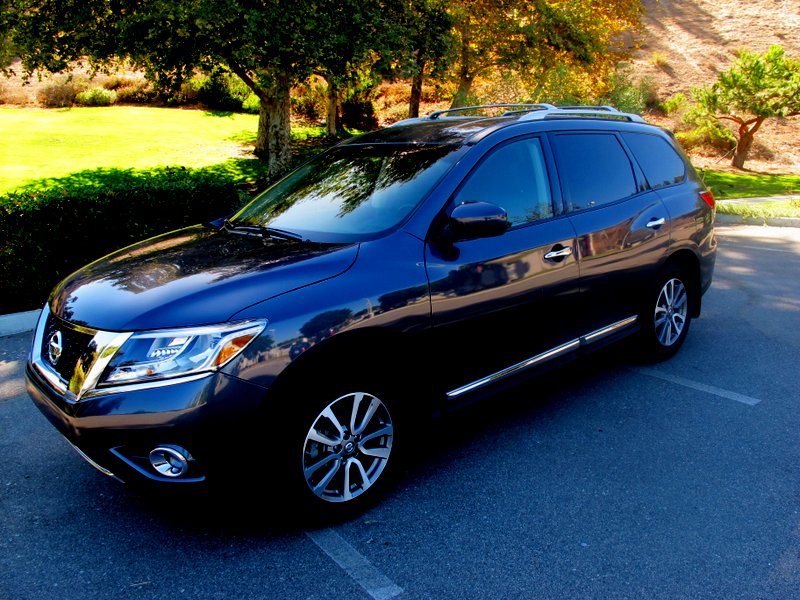