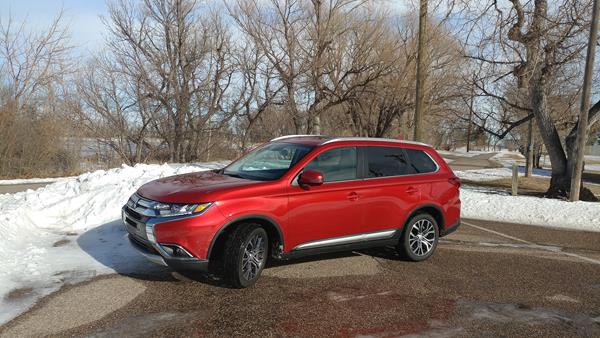 The 2018 Mitsubishi Outlander is a three-row crossover in the larger compact range. Its main high points are the very low price for a three-row, a feature-rich interior and real-world all-weather capability. The Outlander doesn't wow any audiences otherwise, with its average looks and lackluster performance.

Even with its boring drive quality, there is a lot to like about the 2018 Outlander. This is a family-level crossover that brings the goods, checking the boxes for most average family needs, such as seating for up to seven and plenty of cargo space. Fuel economy is good and safety is high, both big requirements for most three-row buyers.

Most of the changes for the 2018 model year Outlander are in trim level and package shuffling, adding a new Limited Edition (LE) trim at the center of the lineup to give even more choices for budget-minded buyers. We note that the base model now includes a 7-inch touchscreen as standard and the top-most GT trim, both the most expensive and sportiest of the line, has even more standard equipment as well.


What We Love About the 2018 Mitsubishi Outlander:


What We Don't Love About the 2018 Mitsubishi Outlander: 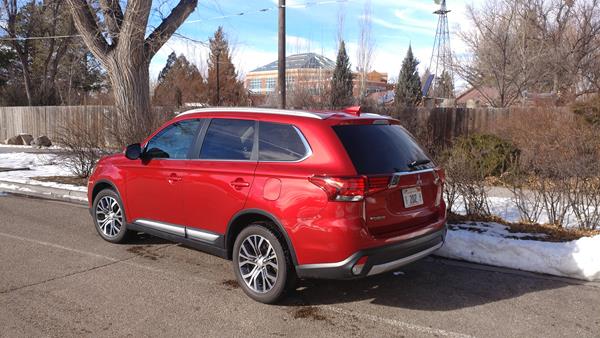 The word contemporary gets thrown around a lot as a fancy way of saying "looks like all the others in this class." That's the perfect description of the 2018 Outlander, with its somewhat plain look and nearly outdated exterior. When the current-generation Outlander debuted a few years ago, it was really forward-looking in its design. But time has caught up with the crossover, as most in the segment have now seen redesigns.

That doesn't mean that the 2018 Mitsubishi Outlander is ugly, though. We like the unique slotted grille and low profile of the hoodline on this rig. We're also fans of the straight-edge body styling and the retention of the squared-off rear hatch compared to the more rounded, less useful hatches on some competitors.

Age is getting to the Outlander, and it shows in the overall look compared to the sportier, faster-paced designs of competitors from Mazda, Honda and the like. We're expecting a new design for the Outlander in the next year or so. 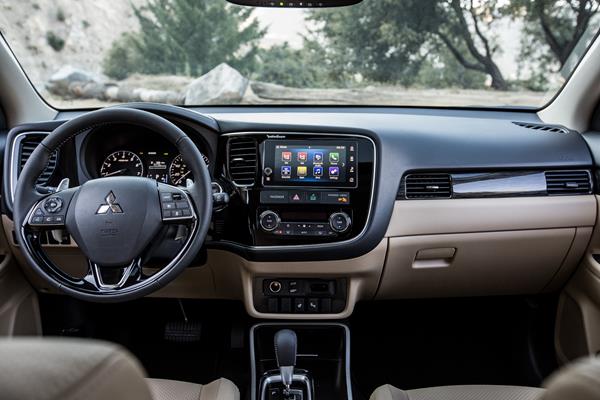 If the primary reason for buying an Outlander versus the competition wasn't its lower price point, it would be tempting to seriously bash its interior look and feel. For the price though, the 2018 Outlander gives exactly what should be expected, with good materials quality but not much in the way of style or detail.

There's enough storage for basic use in the 2018 Mitsubishi Outlander, but modern families will note a lack of USB ports throughout the cabin in all but the uppermost trim levels. They'll also note that storage is good, but details such as places to put phones and spots for small items are missing, especially in the second row.

Front-row seating is excellent, with plenty of room and lots of adjustment options for driver and front passenger. Visibility for the driver is well above par, adding to safety in the Outlander. The front doors are both wide and swing to nearly 90 degrees, making getting in and out of the 2018 Outlander easy.

In the second row, seating is a little more cramped but still adult-friendly in the outboard positions, with the center spot being best for kids or younger folks. That's the norm for this segment, but the narrower doors and higher entry point (due to tall sills) is not and may make things for those with less mobility more difficult. Headroom in the second row is very good, and legroom is pretty good as well.

In the third row, things are mostly geared at children. Kids in booster seats on up to younger teenagers are accommodated well back there. Anyone larger will have trouble getting in and being comfortable. That's not a serious knock on the Outlander, as almost every vehicle in the midsize and smaller classes have kid-only third rows.

Cargo space in the Outlander is on par for the class, at about 10.3 cubic feet with the third row up. Fold all of the seats (which fold flat) and 63.3 cubes open up. There are some with larger spaces inside for cargo, but most don't have the square rear hatch opening or the truly flat-loading floor of the Outlander, both of which are important.

If you're willing to look past the hard plastics and pretty lackluster design of the 2018 Mitsubishi Outlander's interior, there's a lot of goodness for the money being spent. Materials quality is good and layout for the driver and front passenger is also good. 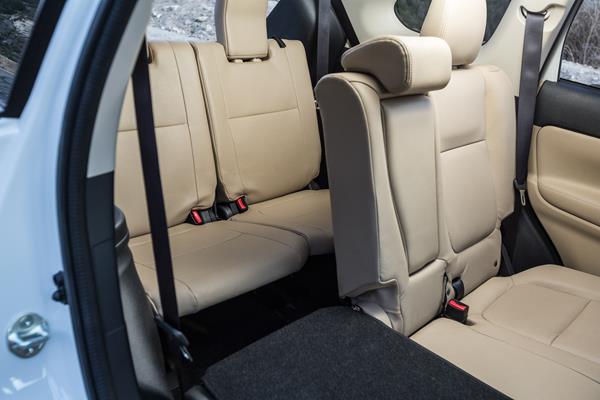 The 2018 Outlander comes standard with a 7-inch touchscreen for infotainment and all but the base ES model have Apple CarPlay and Android Auto as standard. Connectivity via Bluetooth and basic stereo functions are included in the base model while upper trims add on a few more things as they progress.

Mitsu's infotainment interface is good, but not great. The big, crisp buttons are nice, but the menus can be clunky to follow and response times vary depending on what's being done. Connect a phone via Bluetooth and stream music or make a phone call, for example, and other infotainment options (like navigation) really start to slow down as the system multitasks.

For the most part, average users will find that the Outlander's infotainment is good enough for daily use. Most will not likely be upgrading to the top-most Rockford Fosgate option due to price, but those who do will probably be a bit disappointed in everything but the audio system upgrade it brings.

The four-cylinder engine that's standard in all but the GT model delivers solid fuel economy returns for its downsizing. The 2018 Mitsubishi Outlander is EPA-rated at 25 mpg in the city and 30 mpg on the highway.

In the real world, we found that the little four-cylinder engine delivered that expected fuel economy most of the time. Especially on the highway. During our week with the vehicle, we saw 26 mpg as our overall average, despite heavy winter weather and regular use of the "Snow" mode in the all-wheel drive transmission.

The GT model drops those numbers with its V6 upgrade, but still delivers respectable highway numbers regardless. The EPA rates that engine at 20 mpg in the city and 27 mpg on the highway. 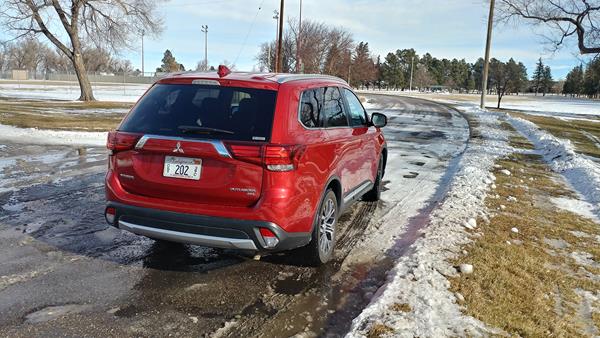 There are no 2018 numbers to go off of for reliability expectations for the 2018 Mitsubishi Outlander. Since it is virtually identical to its 2017 model year version, we are basing our reliability scoring here on that model year's returns.

The 2017 Outlander received an "About Average" score on the J.D. Power and Associates Vehicle Dependability Study. Similarly, Consumer Reports gives it a middle-of-the-road expectation. We give Mitsubishi credit for its better-than-average warranty at five years and 60,000 miles, and its drivetrain warranty of 10 years or 100,000 miles.

There have been no recalls, as of this writing, for the 2018 Outlander.

The Insurance Institute for Highway Safety (IIHS) rates the 2018 Mitsubishi Outlander with top scores of "Good" across the board on all five crash tests published thus far. The Outlander has consistently returned great safety scores throughout its lifespan.

The 2018 Outlander comes standard with a 2.4-liter four-cylinder engine and a continuously variable transmission (CVT) in all but the GT model. This engine outputs 166 horsepower and comes with front-wheel drive as standard and all-wheel drive via Mitsubishi's All-Wheel Control (AWC) system as an option. We highly recommend the latter, as it's well worth the $1,500 to $2,000 upgrade cost.

We found that the performance level of the little 2.4 varies, depending on load. Driving solo and without a lot of environmental factors (high winds and the like), the Outlander does just fine in most situations. Add a lot of cargo or a near-full load of passengers, and it begins to get sluggish. Crosswinds are similarly hard on the highway performance of the Outlander. 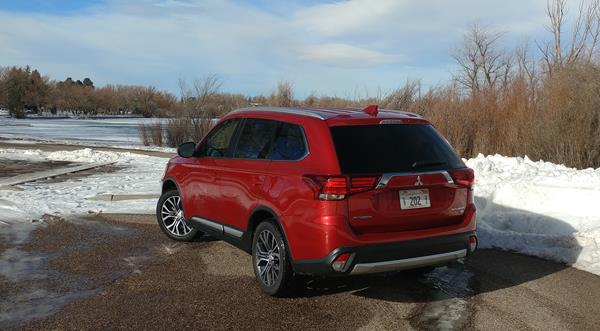 Even with all of that, getting up to speed for the freeway or pressing down to pass on the highway are not out of reach for the 2018 Outlander. The little 2.4 and its CVT will protest mightily, but all of that protest is in sound and doesn't translate to sluggishness in any but the most extreme circumstances.

We also found that during heavy winter weather, the AWC system in the Outlander is beyond compare when it comes to getting through terrible road conditions. Nary a slip will be felt as the traction control and all-wheel drive combine together for some of the best road-holding we've seen in any vehicle. We also note that the AWC upgrade does not affect mpg returns.

The GT model is powered by a more robust 3.0-liter V6 that outputs 224 horsepower into a six-speed automatic transmission. We haven't driven this model, but it receives good reviews as a sports-tuned option for the Outlander.

The 2018 Outlander is a mixed bag of value returns. On the one hand, when shopped against comparably equipped competitors, the Outlander is usually the lower priced option. On the other hand, slow sales and some of the lowest trade-in values in the market mean that the longer-term outlook for the Mitsubishi is not as good.

The lower sales numbers are good for the buyer though, and could mean a smoking deal at a dealership as they work to move units off the lot. We very much recommend that budget-conscious buyers look at the 2018 Mitsubishi Outlander SE model as their choice, with an upgrade to AWC for better resale and versatility.

Our recommendation is to shop around heavily before settling on an Outlander, and know that if the Mitsubishi is your ultimate choice, it will be because you've done your due diligence. 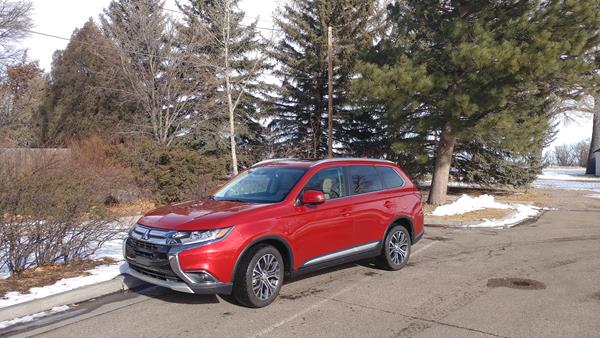 Granted there are few three-row options left in the compact crossover category, those that are available are very competitive with the 2018 Mitsubishi Outlander. The Honda CR-V is the best-selling option and doesn't cost much more than the Outlander when compared to the mid-level trims. Also highly comparable to the Outlander is the Hyundai Tucson, which is sometimes a little cheaper and offers more on almost every level. The new Kia Sorento is also worth cross-shopping as an alternative.

Knowing those competitors are worth looking at, we still recommend keeping the 2018 Mitsubishi Outlander on your list of comparables if your budget is a big part of the equation. Given the market and the options, it's assured that the Outlander will be the lower-priced option almost every time.