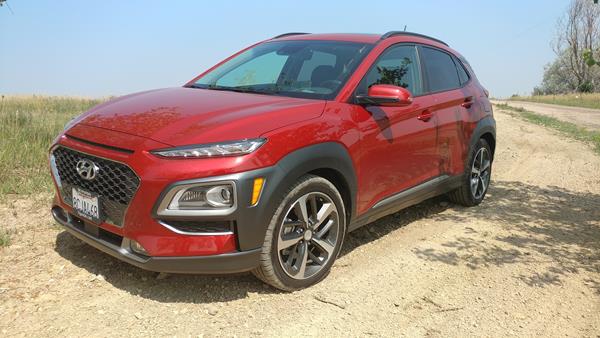 The 2018 Hyundai Kona is all-new, marking the Korean automaker's latest foray into the subcompact classes. The Kona is competing in the newly-popular subcompact crossover-SUV segment against some strong, but often polarizing rivals. The Kona's strengths are in its good looks, excellent powertrain options, and value orientation.

The Kona is brand new, so there are a few things that are tougher to give ratings for, such as reliability expectation, but the company's strong warranty coverage helps make up for that. It's also important to note that the Kona changes dramatically between some trim points due to powertrain and suspension changes, which can affect how it's perceived when driven.

The 2018 Kona is a five-passenger subcompact crossover and comes in four trim levels. Two engine and transmission pair options are available, depending on trim level, and either front-wheel or all-wheel drive can be opted for. 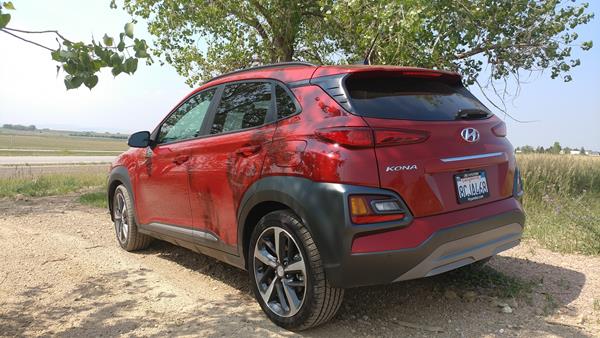 The 2018 Hyundai Kona has a great-looking exterior and is far less polarizing than are many of its rivals in this burgeoning class of vehicles. The Kona has a front fascia design that's similar to many of Hyundai's cars and small crossovers and body styling that's similar to the larger Santa Fe Sport. Yet it remains unique in the lineup overall.

The Kona's front fascia sports a wide diamond-shaped grille, winged by thin headlamps and a small faux induction intake above. The lower portion of the fascia has a thin air scoop and a sporty race-style aerodynamic shape that's crossed with a somewhat high approach angle. The hood of the Kona is marked with speed lines running back to the raked windshield.

Thin exterior mirrors sit behind aggressive front fenders and mark the starting point for strong body lines running back, across the doors, in a slightly upward tilt, over the door handles, to the rear fender and tail lamps. Large wheel wells with heavy edges for a robust look help build credibility for the 2018 Kona as a crossover, as does the high ground clearance below. This muscle is tempered somewhat by the classy running board notch inset.

The rear haunches of the 2018 Hyundai Kona continues the powerful stance of the vehicle, bulging out slightly with a strong presence. Above them, the rear pillar is partially blacked and tilted, creating a Euro-swoosh and "floating roof" design element that is matched by (on most models) a blacked roof for a two-tone appearance. The rear hatch is rounded nicely, ending in a strong, vertical bumper.

In profile, the Hyundai Kona has a forward movement to its design that adds a sporty flavor to its mixture of robust refinement. The rear wheels are pushed nearly off the rear bumper while the front overhang and thin headlamps create a fast pace for the front.

The 2018 Kona is a beautifully-designed crossover whose look is unusually good for the segment, giving an impression that it's far larger than its subcompact size might indicate. 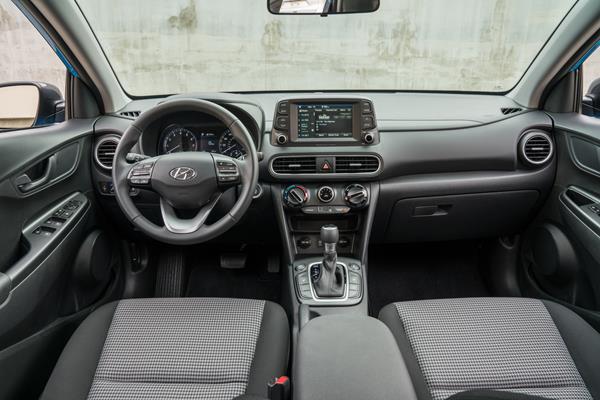 The 2018 Hyundai Kona has a good, but not stellar interior design. The overall quality and roominess are good for the class, but a lack of adornment drags it down considerably. Seating comfort, ergonomics, and materials use are all good in the Kona.

In the front seats, the Kona features good comfort and bolstering, with padding in all the right places including on the door panel elbow points and the center bin/armrest. The driver is presented with easy-to-reach controls that are well-placed and largely intuitive. The center console is set with a well-placed infotainment screen and well-designed climate control switches. Legroom, headroom, and shoulder room are all good in the front seats of the Kona.

What's generally missing along the dashboard and center console in the 2018 Kona, however, is contrast and texture. Some texturing of the hard plastics found throughout the interior of the Kona helps to offset its cheapness, which is good, but tones are generally monotone and this lack of contrast creates boredom. Small item storage is also at a premium in this tiny crossover.

In the rear seats, which are easy to get into thanks to the tall door openings and near-90-degree swing they have, comfort is also good. For a subcompact, the seating in the back of the Kona is better than most with good headroom and a nice ride height. Legroom is limited, as with all small vehicles like the Kona, but the seats are usable on the whole. Three across, whether adults or children, is only good in a pinch and for short distances, of course, but that's to be expected of a subcompact.

The 2018 Hyundai Kona's cargo space is unusually large for the segment, we note. There is 19.2 cubic feet of space behind the rear seats with a shallow tray below the floor board for smaller items. The rear seats are split-fold as standard and fold nearly flat to add even more space for stuff. 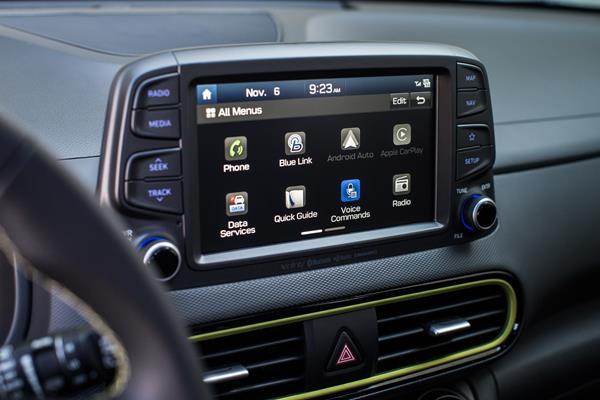 In the lower end of the automotive size spectrum, technology is often a hit-or-miss game. Some offer huge amounts of it, generally at the expense of other things, or offer almost no tech at all. The Kona offers an excellent compromise that does very well as a benchmark for others to meet.

Standard equipment includes Apple CarPlay and Android Auto, which allow even the lower-end Kona models' tech features to be bolstered by smartphone-based apps and uses instead. We were also impressed with the connectivity and general lack of glitchiness for the smartphone integration and Bluetooth in the Kona.

The base model 2018 Kona comes with a 7-inch infotainment screen, a USB plug, and a six-speaker audio system. This is a pretty good start that offers a lot for the entry-level buyer, especially with the aforementioned Auto and CarPlay as standard. The highest-end Ultimate trim level upgrades the screen to 8 inches and adds several of Hyundai's connectivity systems (via BlueLink) as well as navigation and a wireless charging pad.

Hyundai's system is simple to use and, while not terribly robust, very good for most daily needs. It has a near-seamless Android Auto interface as well, which is a boon.

The 2018 Hyundai Kona comes with either of two engine and transmission pairs. The standard option is EPA-rated at 27 mpg in the city and 33 mpg on the highway, which are good numbers for the class. These numbers change slightly, but the overall combined rating remains intact for the all-wheel drive option.

The turbocharged powertrain upgrade for the 2018 Kona is rated at 28 mpg in the city and 32 mpg on the highway. Again, these numbers alter slightly for AWD. In the real world, with the AWD model equipped with the 1.6-liter turbo, we averaged 29.3 mpg overall after a week of driving.

The Hyundai Kona is an all-new model for 2018, but benefits from a generally positive reliability expectation that the automaker enjoys. An excellent warranty and lack of recalls also help boost the Kona's expectation. J.D. Power and Associates rates the 2018 Hyundai Kona as "Better Than Most" on its Vehicle Dependability Study. 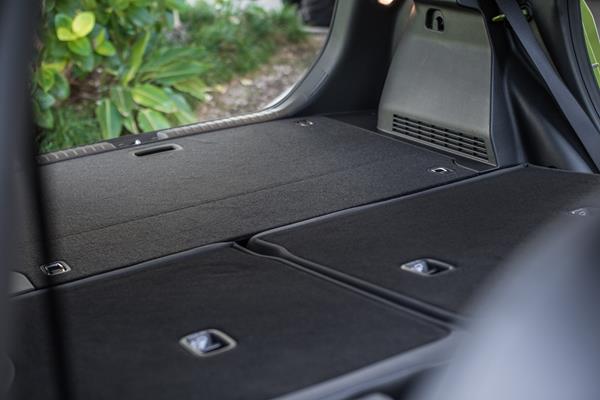 So far, the National Highway Traffic Safety Administration (NHTSA) has not yet rated the 2018 Hyundai Kona for crash worthiness. The Insurance Institute for Highway Safety (IIHS), however, has issued a full suite of crash test results and the Kona came out very well. In all crash tests, including the new passenger-side small overlap, the 2018 Kona received top scores of "Good." It also received that score for its optional frontal crash prevention technologies and for its headlamps.

As such, the IIHS has given the 2018 Hyundai Kona its coveted Top Safety Pick+ rating.

The Hyundai Kona SEL trim and above can be equipped with the Hyundai Smart Sense suite of advanced safety features. These are standard on the Ultimate trim. They include forward collision warning and mitigation, lane keeping assist, and a driver attention monitor.

The 2018 Hyundai Kona has two engine and transmission sets to choose from. The lower two trim levels are equipped with a 2.0-liter four-cylinder engine that outputs 147 horsepower to a six-speed automatic transmission. This engine is just about enough to propel the Kona around in most situations, but will feel sluggish at higher speeds or when under passenger/cargo loads.

The upgrade option, standard in the top two trims, is a 1.6-liter turbocharged four-cylinder engine that outputs 175 horsepower to a very well-done seven-speed dual-clutch transmission. This transmission debuted a few years ago on the Hyundai Tucson to good effect and has the same high marks here on the Kona.

The 1.6L-turbo offers great acceleration while the dual-clutch trans shifts quickly and rarely hesitates, especially in acceleration. This engine/transmission combination gives the Kona a lot of kick and verve around town and good acceleration on the highway.

Another point of note is the difference between front-wheel and all-wheel drive in the Kona. With the FWD system, the rear suspension is far more pliable and less sporty to drive while the AWD system changes the rear suspension to make it a bit tighter and more capable. This far superior drive quality and road absorption is noticeable and makes AWD the preferred choice in the Kona.

The 2018 Hyundai Kona is new, so pricing can vary greatly between regions and trim points. Most dealerships are offering incentives for 2018, but those are fickle and could change quickly. The lower two trims are not a great buy in terms of their drive quality in comparison to the upper two trims, but the price jump from SEL to Limited can be hefty.

We still recommend the Limited model, however, for its turbocharged engine and better transmission and would also recommend adding on the AWD option despite the price jump. This brings a vastly superior drive quality and capability to the Hyundai Kona without sacrificing much in terms of fuel economy. 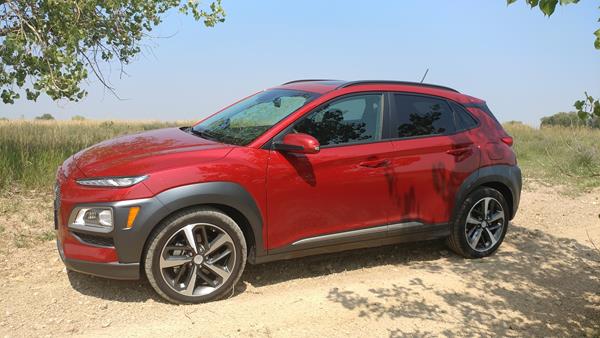 The 2018 Hyundai Kona brings a lot of game to a newly-emerging, but competitive market. Up against the Kona for buyers' attention are the all-new Nissan Kicks, the Toyota CH-R, and the Jeep Renegade.These three excellent sellers match up against the Kona in different ways.

The Kicks is all new and replaces the Nissan Juke, which was highly polarizing, with a more contemporary look that's honestly a bit bland when compared to the Kona. It otherwise competes well in interior comfort and roadworthiness. The CH-R is a much more polarizing vehicle with far less road appeal than the Kona while the Renegade is a more robust, off-pavement-ready machine true to the Jeep name.

The 2018 Hyundai Kona brings a lot to the subcompact crossover-SUV arena and sets benchmarks on several levels. We really like the mixture of comfort, design, and utility that the Kona has and are impressed with its turbocharged drivetrain option and excellent on-road appeal. The Kona marks a high point in this burgeoning compact class.