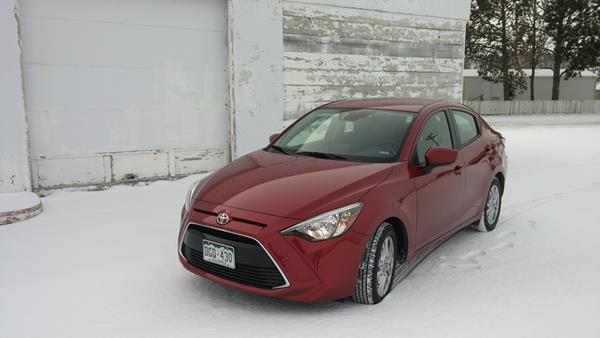 The Yaris has been Toyota's subcompact offering for some time. Its popularity has varied, especially as more compelling offers from the competition have entered the market. With the 2017 model year, the Toyota Yaris sees the integration of a lot of safety and driver-assistance technologies that are unusually premium for this entry-level segment. These are standard in the Yaris, setting a precedent that others in the compact segment may be forced to follow.

Another addition is the moving of the Scion iA model, which becomes the Yaris iA under the Toyota brand. This adds a sedan version of the Yaris that brings a different dimension to the model.

The 2017 Toyota Yaris is offered as three distinct models: the 3-door and 5-door hatchbacks and the Yaris iA sedan model. The hatchbacks and sedan are themselves very different in terms of exterior styling and powertrain, with the engine being shared but different transmissions.

The Toyota Yaris hatchback and the Yaris iA are very different in appearance. The 2017 Yaris hatchback is relatively plain, but not necessarily boring. With a short hood, fast-paced style and up-market touches like a beltline running through door handles and hood creases emphasizing the pillars, the Yaris hatchback is unusual for an entry-level vehicle.

The 2017 Toyota Yaris iA is long in the hood with a coupe-like appearance. There are some similarities in styling, but not many. This is due to the Yaris iA being a rebadged Mazda2 sedan as part of a partnership with Mazda. The Yaris iA was folded into the Toyota lineup when the Scion brand was discontinued last year, where it was known as the Scion iA.

Although the two cars are very different in look, the 2017 Toyota Yaris in both its hatchback and iA formats is rather nice to look at. There are sportier and more upscale-apearing compacts on the market now, but true to the Toyota brand, these Yaris models fit somewhere in between boring and way out there.

The 2017 Toyota Yaris has a bit of a mixed bag when it comes to the interior. Standard features and materials quality are high points, with both being much better than similarly-priced competitors in this segment. This is especially true of the Yaris iA sedan, whose single trim level is almost fully loaded. In all Yaris models, normally upgrade items such as a touchscreen infotainment interface and tilt-telescoping steering are standard features.

Where the Yaris falls short is in roominess and seat adjustments. The front seating is difficult to adjust to a comfortable position, especially for larger folks, and the rear seats are only adult friendly if front-seat passengers are very small. This is true no matter the Yaris model.

For cargo, the 2017 Yaris iA is on par with sedans in the compact class, but the Yaris hatchback has less space than most of its primary competitors.

These factors may be deal breakers for some shoppers, but many will find that the high points outweigh the low in this basic entry-level car.

For the segment, the 2017 Toyota Yaris has one of the best technology offerings for the price. The Yaris hatchback has a 6.1-inch touchscreen display as standard equipment, offering basic audio and climate controls along with voice recognition and Bluetooth connectivity. Large buttons and a crisp display (compared to rivals) make this a user-friendly system.

In the 2017 Toyota Yaris iA, the standard infotainment screen is a large 7-inch unit with similar functionality, but a different interface. Other options in the Yaris hatchback, like push-button start and cruise control, are standard in the iA. 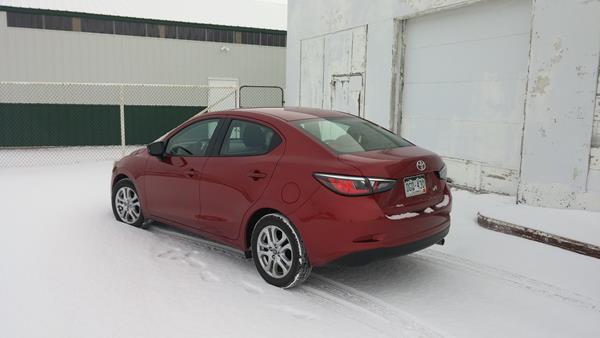 The Yaris hatchback with the base manual transmission is EPA-rated at 30 mpg in the city and 36 mpg on the highway. That's about average for the compact class. The automatic transmission changes those numbers to 30/35.

The Yaris iA has different transmissions, which boost fuel economy a bit more than the lighter weight of the sedan might account for. With the manual trans, the iA is EPA-rated at 30 mpg in the city and 39 mpg on the highway. Our real-world drive in this model proved those numbers to be achievable everyday. The automatic transmission in the iA receives a phenomenal 32 mpg city and 40 mpg highway per the EPA.

The 2017 Yaris has received a "Better Than Most" rating from the J.D. Power and Associates Vehicle Dependability Study. There have been no recalls to-date for the car and its history implies that the Yaris is a better-than-average compact for reliability.

Unusual for the compact entry-level segment, the Yaris in all its forms comes standard with a relatively long list of advanced safety features as standard equipment, including many driver-assistance features. Automatic pre-collision braking, automatic high beams, and lane departure alert are all standard. A rear-view camera is also standard.

Also unusual for the class is for the 2017 Yaris to receive the Insurance Institute for Highway Safety's Top Safety Pick+ designation. This means that the Yaris aced all crash tests as well as tests aimed towards advanced safety equipment such as collision-avoidance braking.

In the National Highway Traffic Safety Administration's tests, the 2017 Toyota Yaris received a four-star rating overall, with four-star scores in frontal and rollover tests and a five-star score in the side crash protection tests.

The Yaris iA is a bit lighter weight and has an extra gear or two as well. With the manual transmission, as we drove it, the iA has a good feel for an entry-level compact. It's not a race-winner or speed demon, but it does have a touch of fun included in its drive. Just enough to make up for the occasional highway struggle when wind, hills or other factors are causing the car to struggle a bit in a pass.

Around town, either Yaris model is a solid combination of efficient "get there" and compact maneuverability.

The base price for the 2017 Toyota Yaris is compelling and compares very well to its compact competition. The 3-door model, however, is not likely a good fit for many buyers and is pricing can be trumped by some 5-door competitors in this class.

Where the Yaris hatchback is most competitive is in its 5-door model priced very well for the amount of standard equipment included. A well-equipped Yaris 5-door with an automatic transmission can be had for just about $16,000.

The Yaris iA sedan competes with a different segment of the compact market and is a likely market leader in terms of its value proposition versus competitors. The only thing holding back the iA would be its lack of trim levels to allow for customization in price structure, but the iA comes very well equipped in comparison to similarly-priced competitors. 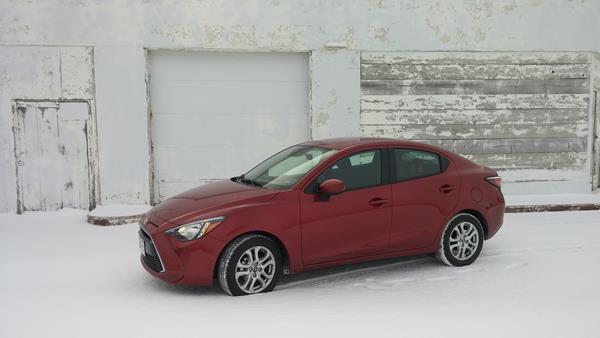 There are several compelling competitors in the compact segment for both a hatchback and sedan Yaris. The best-sellers are the Nissan Versa and Versa Note, the Hyundai Accent, the Honda Fit and the Ford Fiesta. Of these, the Fit and Fiesta are more focused on fun driving and engagement. The Versa and Accent are more about low-cost versatility and efficiency. The Yaris fits somewhere in between those ideals, which is Toyota's forte on the whole.

For those looking at fuel economy as a primary motivator, but who consider the 3-door or 5-door hatchback as their primary option for versatility, looking up the ladder a bit to the Toyota Prius c model might be appropriate.

As it is, the 2017 Toyota Yaris 3-door, 5-door and iA models are well worth considering when shopping the compact market. The Yaris iA is a compelling offering for sedan buyers in this segment.