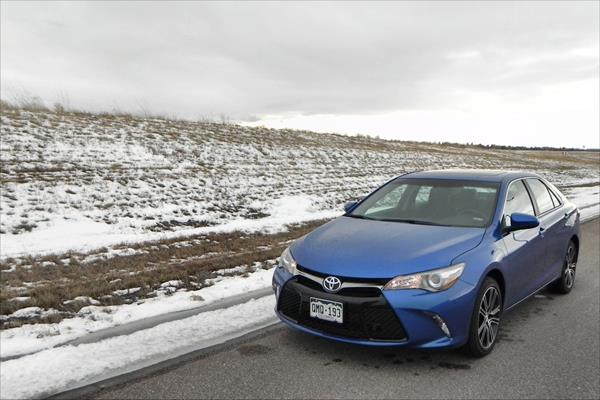 The Toyota Camry hasn't seen a lot of change in several years, but there wasn't much that needed upgrading. A sales dip in 2016 might grab Toyota's attention and demand an upgrade soon, but even with that drop, the Camry remains the best-selling car in America. By a wide margin. And there's good reason for that.

The 2017 Toyota Camry is offered with two engine choices and a Hybrid model option. Shoppers new to the Camry will find that it's ergonomics, roomy interior and excellent reliability expectation are all strong selling points.

The 2017 Camry is a 5-seat midsize sedan. We recommend shoppers seriously consider the Camry Hybrid model as the best option because of its wonderful drive dynamic and high real-world efficiency return. 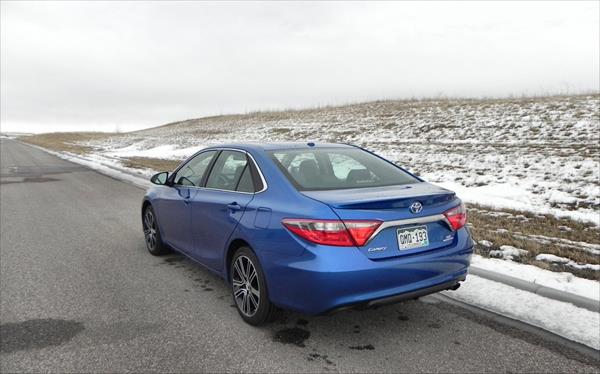 There was a fair amount of surprise when the Camry underwent a redesign a couple of years ago and that redesign has carried forward well. The Camry isn't the most stand-out looker on the lot, but it's contemporary and honest. Most of the design elements for the 2017 Camry emphasize sporty curb appeal without losing sight of the midsize sedan's core audience: those who value comfort and reliability above all else.

From the front, the Camry's intake dominates, widening out underneath the grille with an outward angle. This emphasizes the thin strips for fog lamps and the narrow headlamps to either side of the small grille itself.

Those elements create the lines that flow up the hood, along the fenders and across the beltline. The overall impression given is of a slightly forward tilt and a relatively low roofline behind a raked windscreen. It's a good, though not unique, design goal and it fits the 2017 Toyota Camry well. Especially in its favored colors of white or dark blue.

The 2017 Toyota Camry carries forward with the model's reputation for a comfortable, well-made interior. Ergonomics are very good with plenty of room, storage, and more to keep passengers comfortable. The rear headliner handles, for example, are a small touch not often found in competitive vehicles, but become a boon to Camry passengers with limited mobility when getting in and out of the back seats. 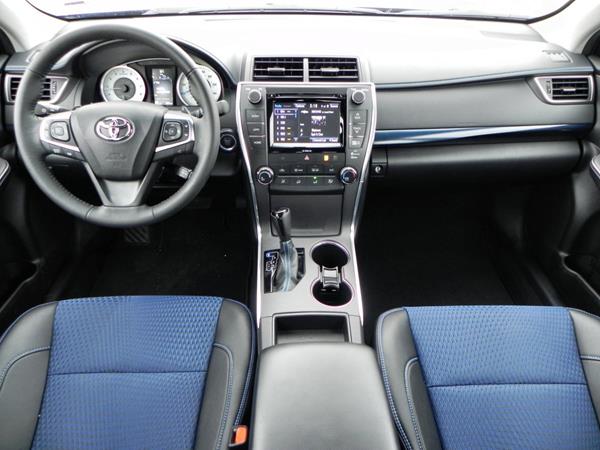 The dashboard features a nice layout with large buttons and knobs, making for ease of use. For the driver, the instrument cluster is easy to read and conforms to what is expected by consumers. A standard tilt-telescoping steering wheel and a nicely adjustable driver's seat make finding a comfortable drive position easy.

Overall, roominess and comfort are good in the Camry. Parents should note, however, that the LATCH system in the rear seats is placed a bit deep in the cushion, making attachment a bit harder to do. Using body weight to press down on the child safety seat helps. This is a common issue with large sedans.

Toyota's Entune is beginning to age but is still easy enough to use and smart enough to score well against competitors. We especially like the Camry's voice recognition system, excellent Bluetooth pickup mics and simplified navigation inputs. Menus in the infotainment are easy to follow and respond quickly.

For most average users, the only obvious problem with the Camry's Entune is the screen, which isn't as sharp or sleek as newer competitors.

Our drive in the V6-equipped Toyota Camry proved that the EPA's estimates are almost right on target with everyday driving in the real world. Most drivers can expect to see a 27 mpg average in their driving with the V6-equipped Camry.

In the Hybrid model, we also saw numbers that coincided with the EPA estimates for the car. A week in the Camry Hybrid found a 38 mpg average. That's on par with expectation and well above what can be found in most competing hybrids. 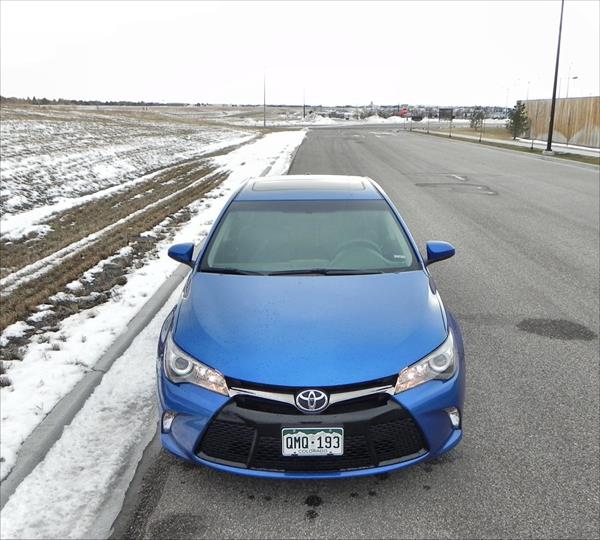 The Toyota brand itself has a high reliability expectation on its own, with solid consumer confidence. The Camry itself is one of Toyota's most well-rated in terms of reliability. The J.D. Power and Associates Vehicle Dependability Study rates the 2017 Camry with an "Among the Best" score, the highest available.

So far, recalls have been for safety items, including air bags.

The 2017 Toyota Camry receives the highest-possible crash safety scores available. The National Highway Traffic Safety Administration (NHTSA) rates the 2017 Camry with a 5-Star overall rating, with five stars in side crash tests and four in frontal and rollover tests.

The Insurance Institute for Highway Safety (IIHS) has given the 2017 Camry a Top Sfety Pick+ rating, its highest result. This indicates that the Camry received a best-available "Good" rating on all crash tests and has advanced crash warning and mitigation systems available and that those also scored well.

The last update for the Camry added some performance boosting for the chassis and steering, which greatly improved the car's capability and feel on the road. The addition of a sportier model trim boosted that a bit. In the end, though, the 2017 Camry continues with the midsize car's greatest consumer expectations, comfort and reliability, with ride and handling being secondary. Power output is also relegated to the back seat in favor of fuel economy. Interestingly, however, the Camry Hybrid is the sportiest and most well-balanced drive of the Camry model mix.

The base engine for the 2017 Camry is an inline four-cylinder producing 178 horsepower and 170 foot pounds of torque. This motivates the car in an acceptable manner, but won't win any races or squeal any tires.

The upgrade engine is a more smooth-flowing V6 that outputs 268 horses and 248 lb-ft. This power output gives the V6 a more stately feel and moves the Camry nicely, though not in a way that indicates there would be checkered flags in its future. Power delivery is smooth and confidence is built thanks to the extra bit available when passing or maneuvering are required.

Our top choice is the 2017 Toyota Camry Hybrid model for both efficiency and drive dynamic. A bit heavier than its gasoline-only counterparts, the Hybrid model has a better vehicle balance and great power delivery from the gasoline-electric powertrain. It produces 200 horsepower and 156 lb-ft of torque. These smaller numbers don't tell the story on their own. The electric power delivery is near-instantaneous, giving the Camry Hybrid a jumpier feel off the line and a faster acceleration overall. Our only complaint with the Camry Hybrid is its noisy CVT, but that only intrudes when the car is really being pressed for speed. 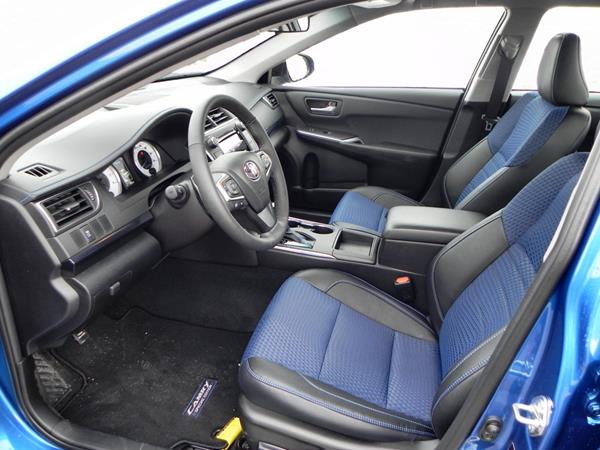 The 2017 Toyota Camry carries forward with the Camry's best-selling status as not only the best-selling midsize sedan in North America, but the best-selling car in America as well. A sales decline last year may shake Toyota up a bit, resulting in a newer Camry coming soon, but the Camry as-is remains a solid choice in the midsize market.

The base model is priced slightly above the competition, but the top-most trim is below similar trims from the competition. Resale values for the Camry remain very good in comparison to the market. A mid-tier Camry can be purchased with a sticker price under $30,000. Given the Camry's excellent resale and near-perfect interior ergonomics, that's a great deal.

The midsize sedan market is one of the busiest in terms of sales and competition. Chief competitors to the 2017 Toyota Camry are the Nissan Altima, the Ford Fusion and the Mazda Mazda6.

The Altima is similar to the Camry in size, capability and appeal. Cross-comparisons between the Nissan and the Toyota should be made with attention to detail, but many will likely stick with the Camry for its higher reliability expectation and better mid-level value proposition.

The Fusion is a good comparable to the Camry as well and should be closely considered for that. The Fusion Energi model is more efficient and just a good a drive as the Camry Hybrid, another option buyers might consider.

The Mazda6 is much sportier and is nicer to look at than is the Camry, though it too is showing its age since its last major update. For those looking for a more spirited drive with similar fuel economy, the Mazda is a great choice.

In all, the 2017 Toyota Camry is an excellent vehicle that sets the expected benchmark for the midsize sedan market on the whole. It's the best-seller in the segment for a reason.