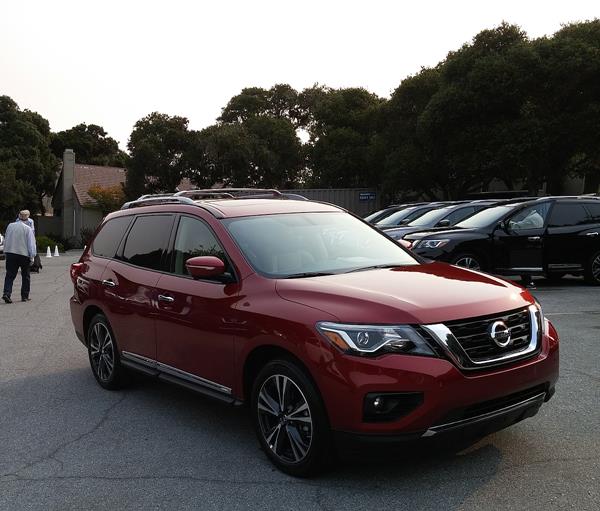 For 2017, the Nissan Pathfinder sees some good improvements to its exterior look and its core functionality. A more aggressive exterior marks this new model year, meeting the expectations of those looking for a more SUV-like crossover.

On the inside, not much changes in the already-great Pathfinder, but an upgrade to the infotainment is a boon and improved underpinnings are a real upside. An improved engine and transmission translates to more towing and better fuel economy.

In a field of very competitive large, 7-passenger crossovers, the 2017 Nissan Pathfinder is definitely one to keep on your shopping list.


What We Love About the 2017 Nissan Pathfinder:


What We Don't Love About the 2017 Nissan Pathfinder: 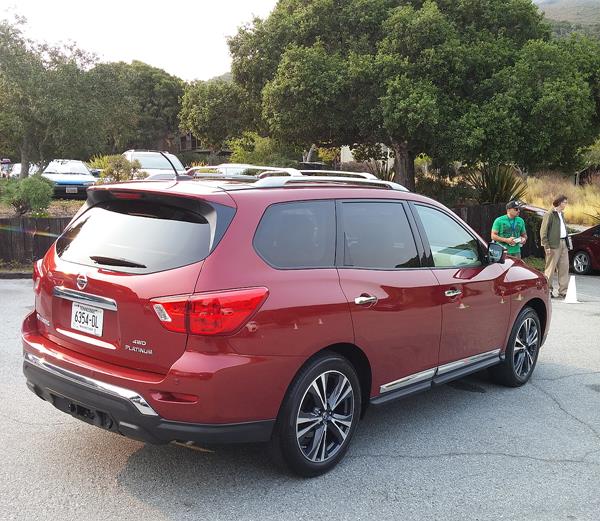 The changes to the exterior of the 2017 Nissan Pathfinder are subtle, but make a very different overall impression when compared to the outgoing model. The front fascia, hood and rear quarter see most of the changes, culminating in a more muscular look for the crossover.

The fascia is dominated by the large V-motion grille that signifies most Nissan models. Made beefier, this grille is underscored by a pronounced bumper line and a more aggressive approach angle underneath. The headlamps are a bit larger and the hood line is flattened and more boxy. This creates a more SUV-like front end, giving the 2017 Pathfinder a more aggressive look.

Along the sides, a few details are changed, but the body panels have much the same look as did the 2016 model. But below the ground clearance is made to look higher with less emphasis on the running board line and by de-emphasizing the wheel wells. At the rear the fender is flared a bit to give the rear quarter a more muscular appearance, and the rear bumper is larger and more pronounced. All indicating a more truck-like feel for the Pathfinder, aiding in its more aggressive SUV styling.

Focus groups conducted by Nissan found that key markets for the 2017 Pathfinder wanted the crossover to look more like a true SUV than the contemporary, rounded look it held before. Nissan has obliged and it's given the 2017 Pathfinder real curb appeal for buyers.

The 2017 Nissan Pathfinder is essentially the same inside as it was for 2016, but that's a good thing as the interior carrying over was one of the better offerings on the market. In the midsize crossover segment, interior splendor is becoming a benchmark selling point and the Pathfinder may not be as compelling as some competitors higher up the price chain.

On the flip side, it's well-designed, ergonomic, and has good materials quality. So while the flashiness and high comfort may not be there, solid everyday excellence is.

The front seats are firm and comfortable for the long haul without being too cushy. The layout for the driver is very well done with a good view of the road and good visibility all around. The Pathfinder doesn't sit as high as some crossovers might, but is otherwise a good experience for the driver and front passenger.

In the second row, seating is very spacious and adjustable. More so than in many others in this segment, in fact, with the added extra of being able to tilt the seats forward for access to the third row without removing a child safety seat. This is a great touch.

The third row is small in comparison to segment leaders, but useful for children and teenagers. Consider the third row in the Pathfinder to be more about having extras on the rare occasion they're needed than as an everyday use. Cargo is good in the 2017 Pathfinder, 47.8 cubic feet behind the second row and 79.8 cubes overall. This is about average for the segment, but will accommodate many people's needs most of the time.

New for the 2017 Nissan Pathfinder is an upgraded infotainment system. The standard system is based around a large 8-inch touchscreen with basic Bluetooth connectivity and a 6-speaker stereo system with satellite radio. There is a USB port for plugging in to charge or input from a media player.

The Platinum trim can be upgraded with the Family Entertainment package that adds two 8-inch displays mounted into the front seat headrests with added USB and HDMI ports, as well as a built-in DVD player. Wireless headphones and a remote control are also included.

The 2017 Pathfinder returns good fuel economy numbers per the EPA. A change in how these are calculated for this new model year resulted in the numbers appearing about the same as last year, but actually mark an improvement overall.

As of this writing, there are no reliability ratings published for the 2017 Pathfinder, but previous years' experiences plus the overall good ratings given to Nissan as a whole lead us to believe that the Pathfinder will do better than average when reliability and quality ratings are released. The only recall so far has been for airbags, which is not a negative indication towards quality. 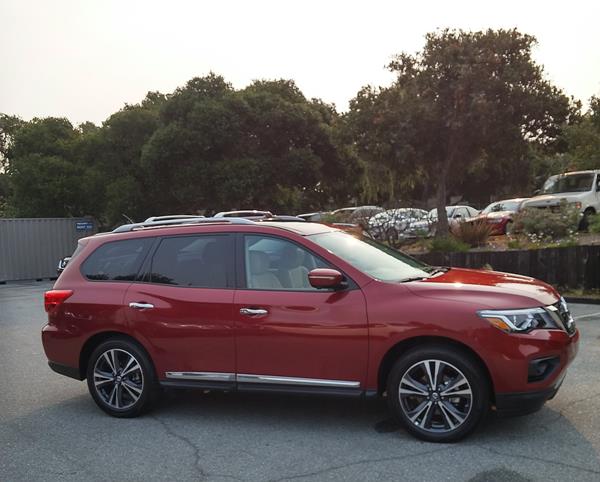 The 2017 Nissan Pathfinder has a good safety rating from the National Highway Traffic Safety Administration. It achieved five out of five stars overall and is about average in its overall safety technology offerings for the segment. The Insurance Institute for Highway Safety has not yet released crash test information for the 2017 model year Pathfinder.

Two things have improved for the Pathfinder for 2017, making it far more competitive in terms of performance when compared with its peers as well as its outgoing model year. A 3.5-liter V6 powers the crossover with 284 horsepower and 259 pound-feet of torque in output. This runs through a continuously variable transmission (CVT) to front-wheel drive or all-wheel drive. The AWD model has an all-wheel lock function and hill-descent control option. Given the better fuel economy, the higher output and, surprisingly, better towing capacity is also a surprise. The 2017 Pathfinder's tow rating is now 6,000 pounds. Much more than most others in this segment.

On the road, the new Pathfinder is a good performer with decent drive dynamics and a confident feel. Around town, it is maneuverable and visibility is good, but on the highway there is still some road noise and transmission hum to be had.

Off the road, the 2017 Pathfinder is as excellent as its heritage promises. We will note that hill descent controls are via braking, which means that steep hills at low speeds with a heavy trailer will likely cause brake heat. The Pathfinder is not a true SUV, so some of the benefits of a truck are lost there.

The base price for the 2017 Pathfinder is good when compared to the segment as a whole, but is for a relatively stripped down version of the crossover. Value for the price will be better had in the mid-tier packages for the Pathfinder, especially the SV and SL trims. A well-equipped 2017 Pathfinder costs about $35,000 delivered, which is very competitive for the segment.

There is a lot of competition in the large crossover segment and for 7-seaters, it's a tough world to be selling in. Chief competitors for the Pathfinder are the high-selling Honda Pilot and Toyota Highlander. Both are top choices in our reviews thus far and are not going to be displaced by the very compelling Pathfinder this year.

Compared to the larger Dodge Durango, the Pathfinder definitely has its high points. Fuel economy and a smoother ride are chief among those. The Mazda CX-9 offers a fun drive dynamic and a gorgeous interior by comparison. So shoppers in this segment will want to comparison shop before making a decision.

Knowing that, we will say that the 2017 Nissan Pathfinder earned the "A" grade we've given it and should definitely be on the list of contenders for anyone shopping in the large crossover category. It's more aggressive exterior and improved fuel economy are excellent points for consideration, as is its superior towing capacity. The Pathfinder has seen some good improvement for 2017.