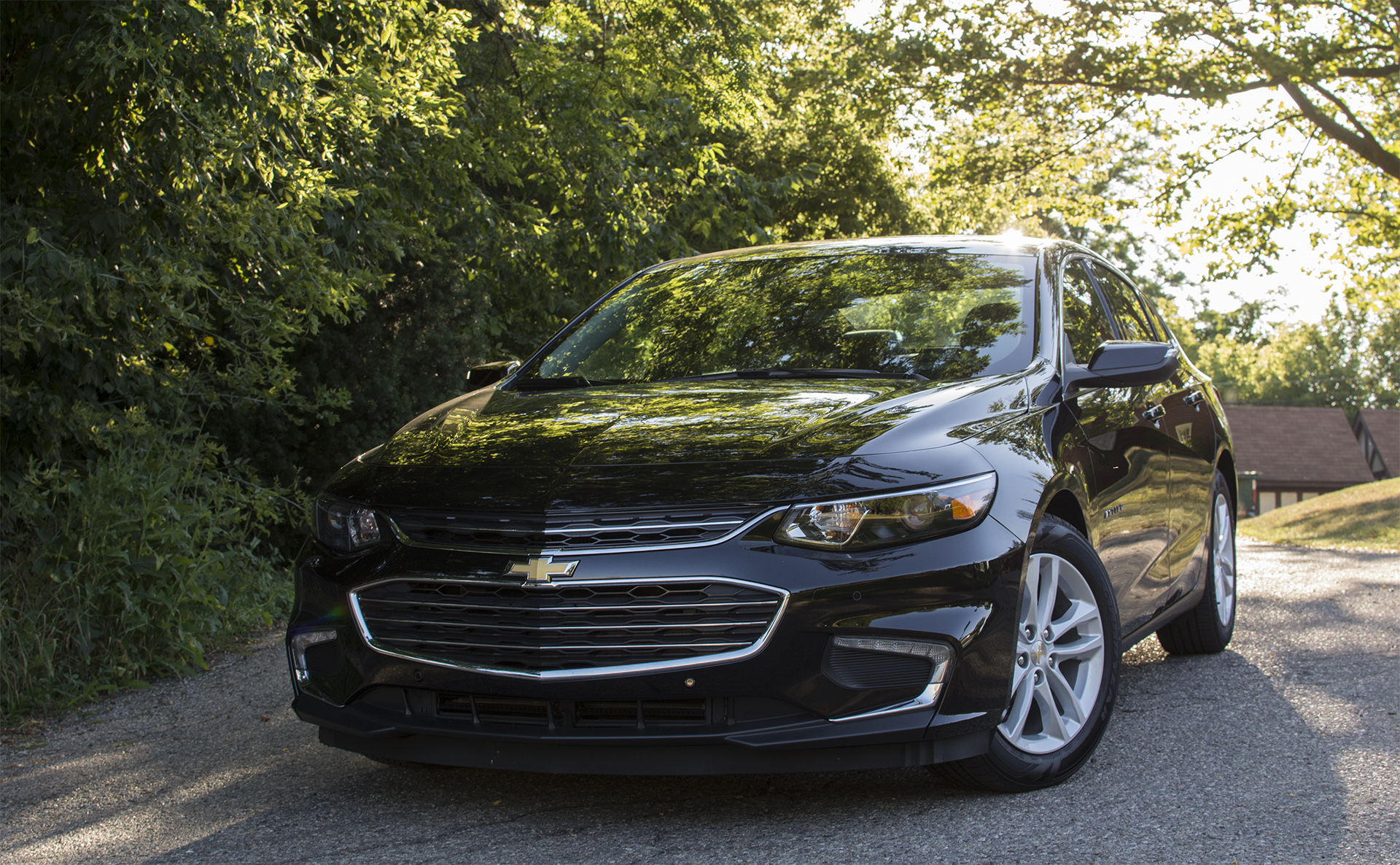 Chevrolet has tried to be a player in the midsize hybrid sedan class for a number of years with the likes of Malibu Hybrid and Eco models. Neither model made a dent due to poor performance and unimpressive fuel economy figures. When it came to designing the new Malibu Hybrid, Chevrolet decided to take some of the lessons and parts from the plug-in hybrid Volt. The end result is a very impressive hybrid sedan.


What We Love About the 2017 Chevrolet Malibu Hybrid:


What We Don't Love About the 2017 Chevrolet Malibu Hybrid: 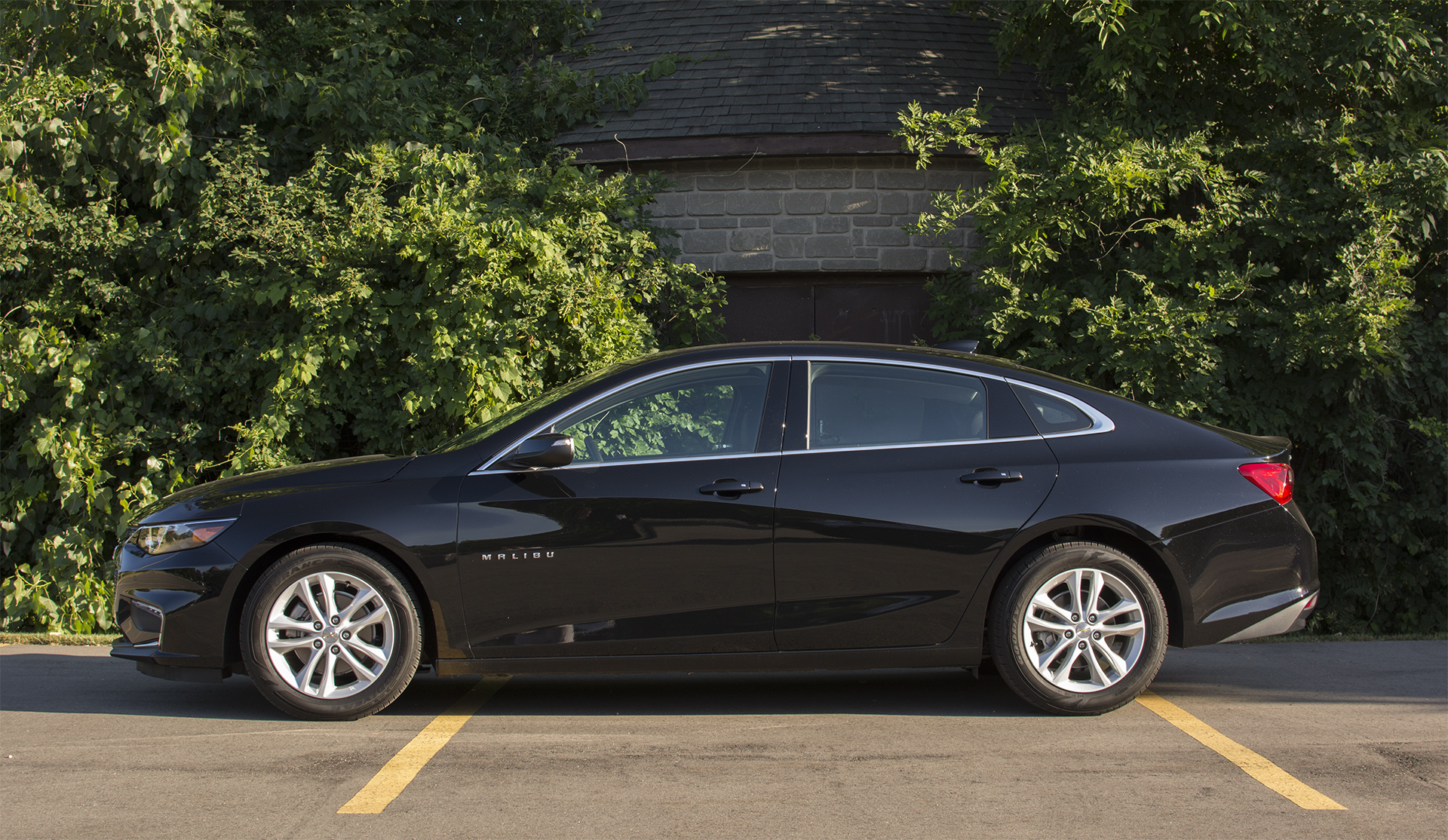 Chevrolet really knocked it out of the park in terms of the Malibu's design. It's one of the sharpest looking midsize sedans, with a profile mimicking Audi's A7 with a coupe-like roofline and short rear deck. The front is quite distinctive with a two-tier grille and slim headlights. The only item we would change are the 17-inch wheels, which don't quite match the rest of the Malibu's design.

Unlike other midsize hybrid sedans that make sure to tell everyone they're hybrids via various badges and unique design traits, Chevrolet doesn't do that with the Malibu Hybrid. From all angles, you would think this is a standard Malibu. The only clue to tell you this one is different is the little "H" badge on the trunk lid. 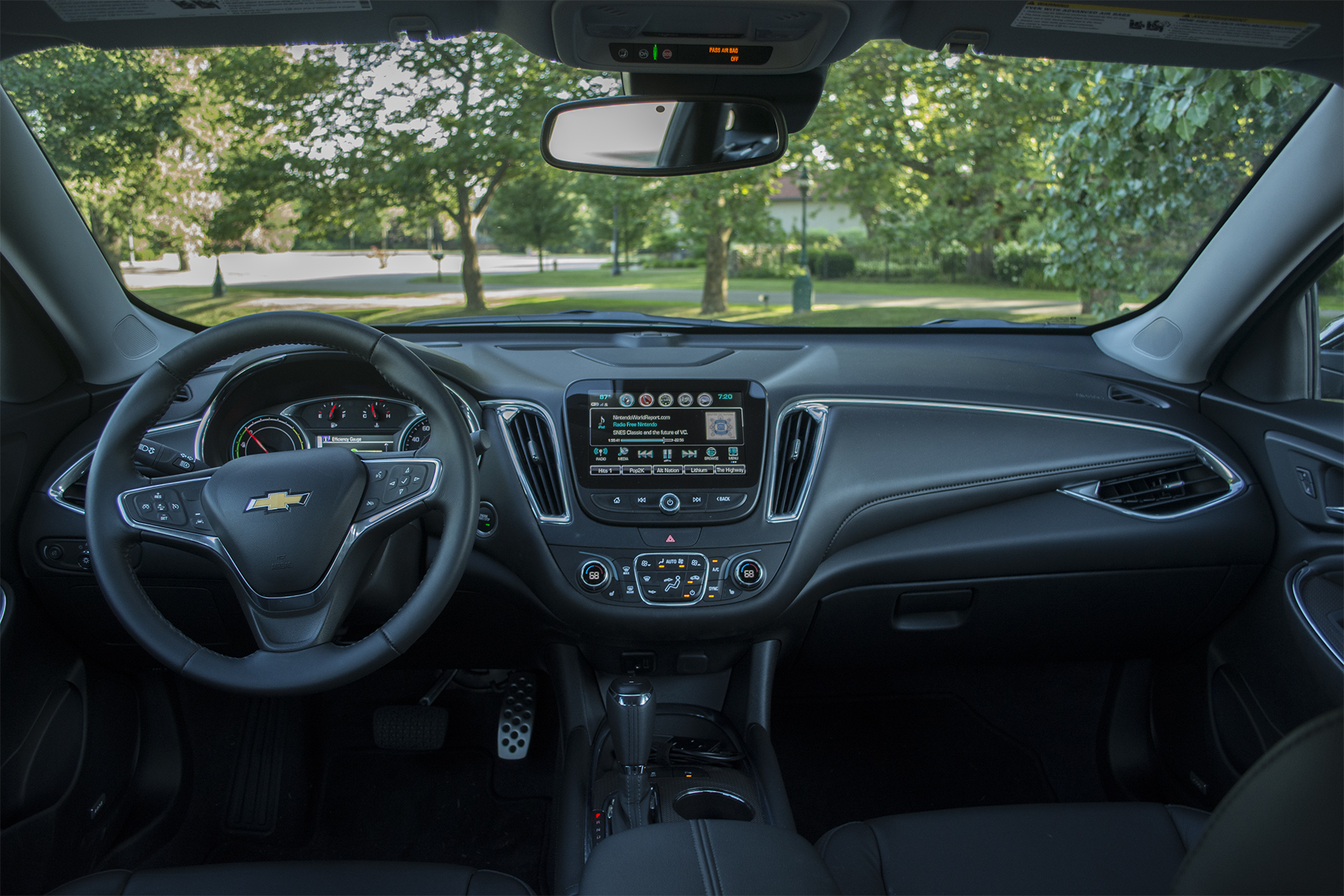 One of our biggest complaints with the Malibu we drove last year was some of the materials used in the interior. There were cheap-feeling plastics used on various parts, along with a fabric dash covering that made the model trail behind the pack. Some of these issues have been resolved with the 2017 Malibu Hybrid if you order a specific package. Our tester came equipped with a leather package that adds leather upholstery for the seats and dash. It helps makes the Malibu look and feel premium, which is a good thing considering the price tag on our tester. Chevrolet has not fixed the hard plastics issue, as there is still a fair amount on the door panels and dashboard, which drags the interior down.

The seats themselves are comfortable and offer excellent support on long trips. Finding a comfortable position for the driver is quite easy thanks to the optional power adjustments and tilt-telescoping steering wheel. The rear seats offer plenty of legroom for adults, while headroom is at a premium due to the sloping roofline. Trunk space is reduced from 15.8 to 11.6 cubic feet due to the placement of the battery pack. This amount is about average for midsize hybrid sedans. The rear seats fold, but the battery reduces the pass-through to a small slot. 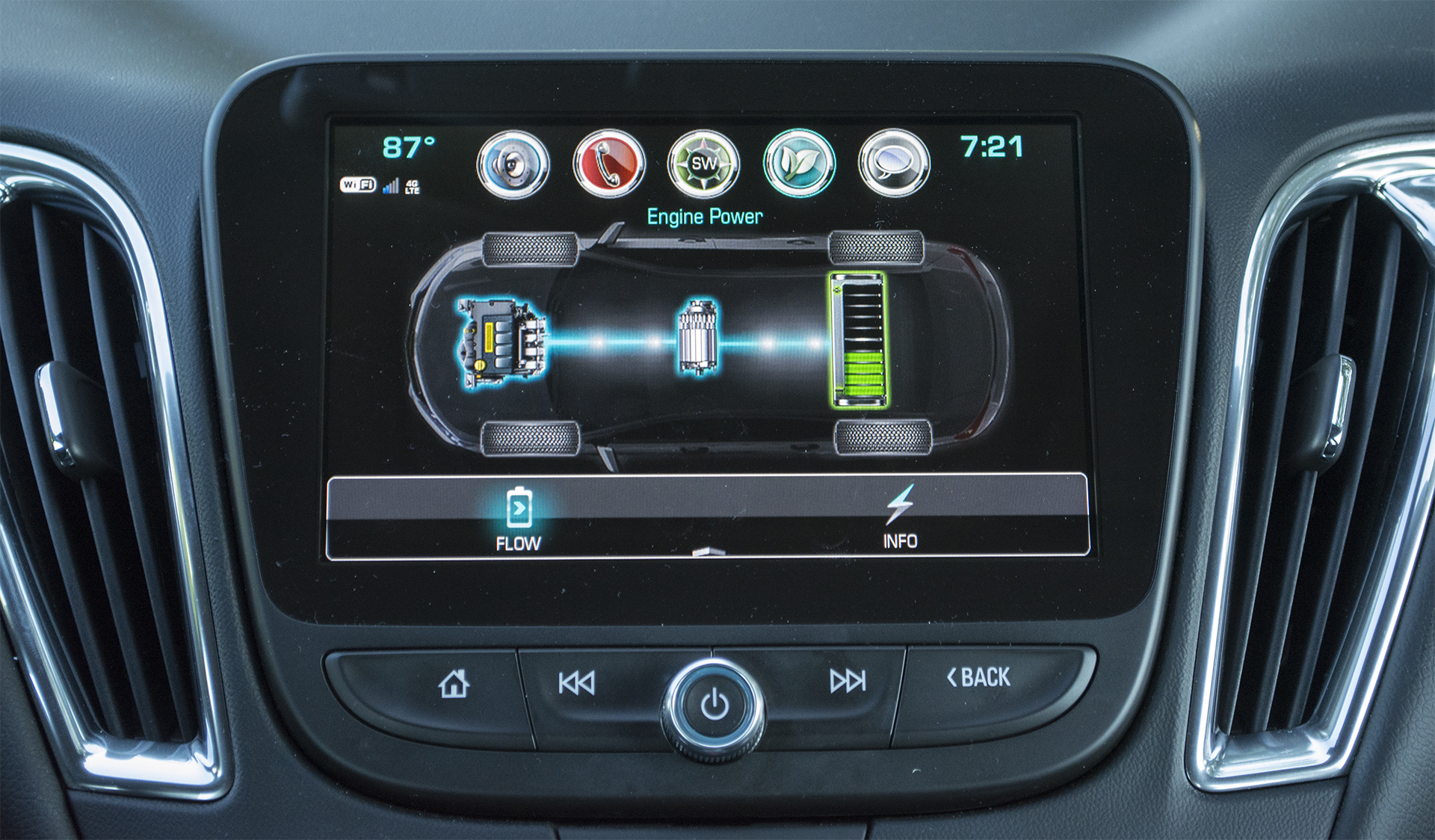 All Malibu Hybrids feature Chevrolet's MyLink infotainment system with either a 7-inch or optional 8-inch screen, which was in our tester. MyLink has come a long way from its introduction a few years ago when it was plagued with a number of issues such as poor performance and the system freezing up. MyLink is much quicker in terms of response times and loading up various functions. Android Auto and Apple CarPlay compatibility come standard. MyLink was able to find our iPhone 7 Plus and bring up the CarPlay interface very quickly. OnStar 4G LTE with Wi-Fi is standard and allows up to seven devices have a high-speed data connection. Pricing is reasonable with unlimited data being available for $20 a month.

The Malibu Hybrid is toward the top of the hybrid midsize class in terms of fuel economy. EPA fuel economy figures stand at 49 City/43 Highway/46 Combined. We saw an average of 45 mpg during our week. 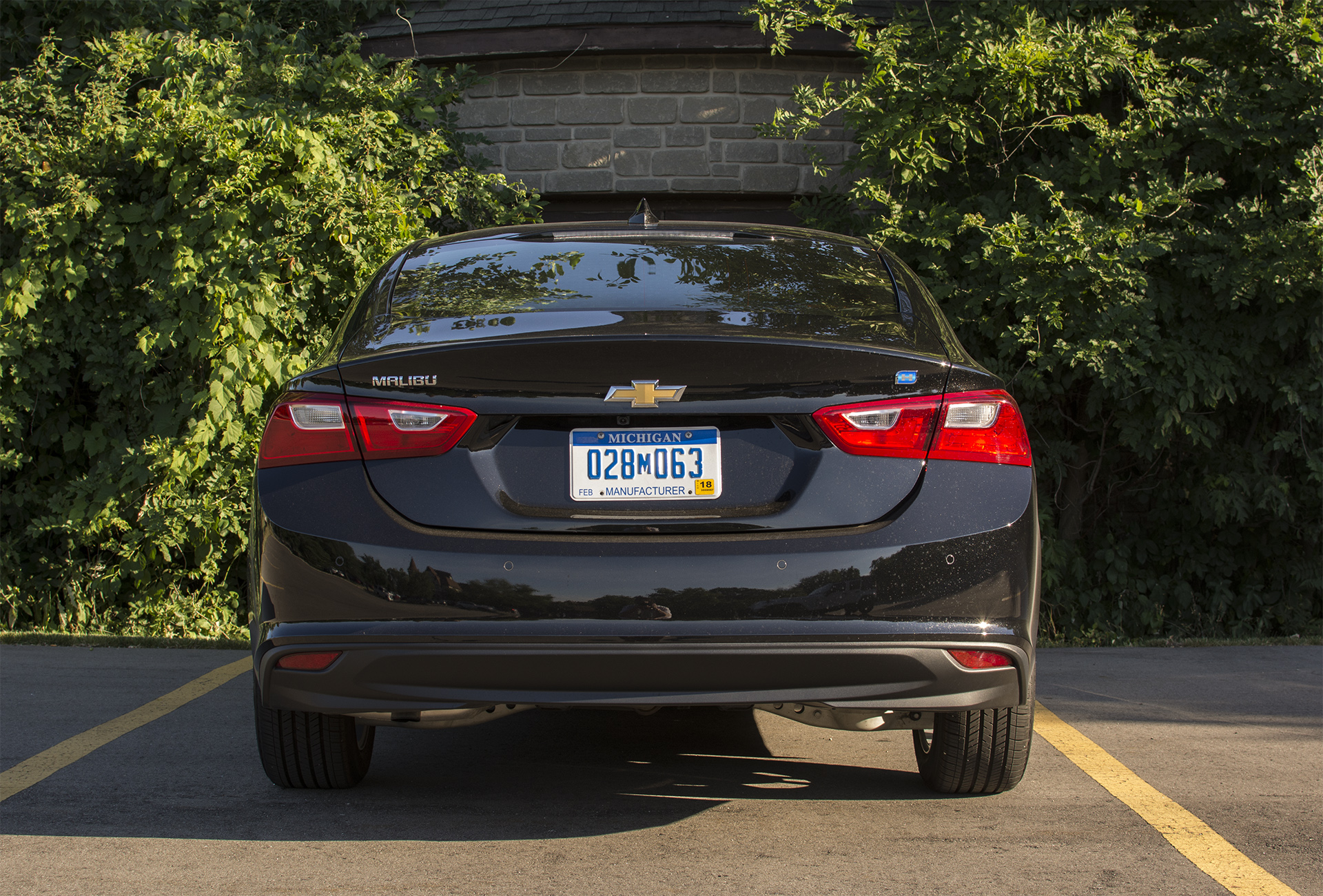 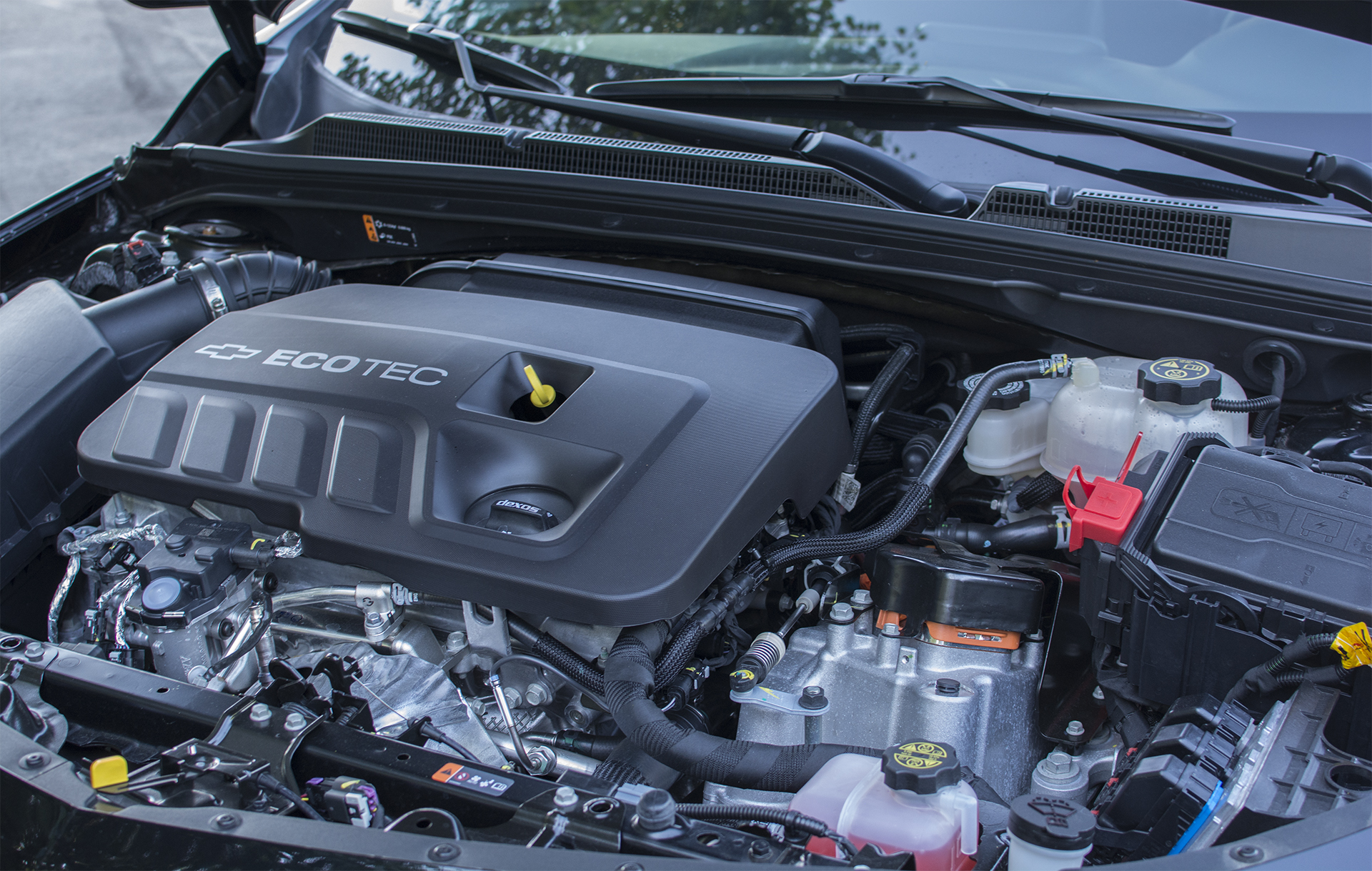 The Malibu Hybrid's powertrain is comprised of a 1.8L 4-cylinder paired with two electric motors and 1.5 kWh lithium-ion battery pack. Total output stands at 182 horsepower. Power goes to the front wheels only. The Malibu Hybrid might have the best hybrid powertrain we have driven. Leaving a stop, the Malibu moves with confidence and force thanks to instantaneous torque available from the electric motors. The transition from electric to hybrid power is mostly seamless thanks to a gear-free transmission and a fair number of clutches that smooths it out. You will notice a fair amount of racket coming from the gas engine when you have the gas floored or if you're going up a steep hill. Otherwise the engine is well behaved in the daily drive.

Chevrolet strikes just the right balance between ride quality and handling. No matter the road surface, the Malibu Hybrid stays composed and delivers a very comfortable ride. Road and wind noise are kept to very acceptable levels. Handling is surprisingly agile, despite the extra weight of the battery. Steering feels decently weighted, but there isn't a lot of feel. The big surprise is the regenerative brakes. Unlike most hybrid vehicles whose regenerative braking systems feel grabby and don't inspire confidence, the ones in the Malibu Hybrid feel like brakes you would find on the standard model. The secret is that Malibu Hybrid uses the same system as the one in the Volt.

The Hybrid variant of the Malibu is one rung down from the top-trim Premier, with a starting price of $27,875 - the highest base price for a midsize hybrid sedan. Our test vehicle came fully loaded with a leather package, the driver confidence package, convenience and technology package, and navigation to bring our as-tested price to $32,730 with destination. This is quite a good value when you take into account everything you get, such as heated leather seats, a Bose audio system, power adjustments for the front seats, the various safety features, and remote start to name a few. 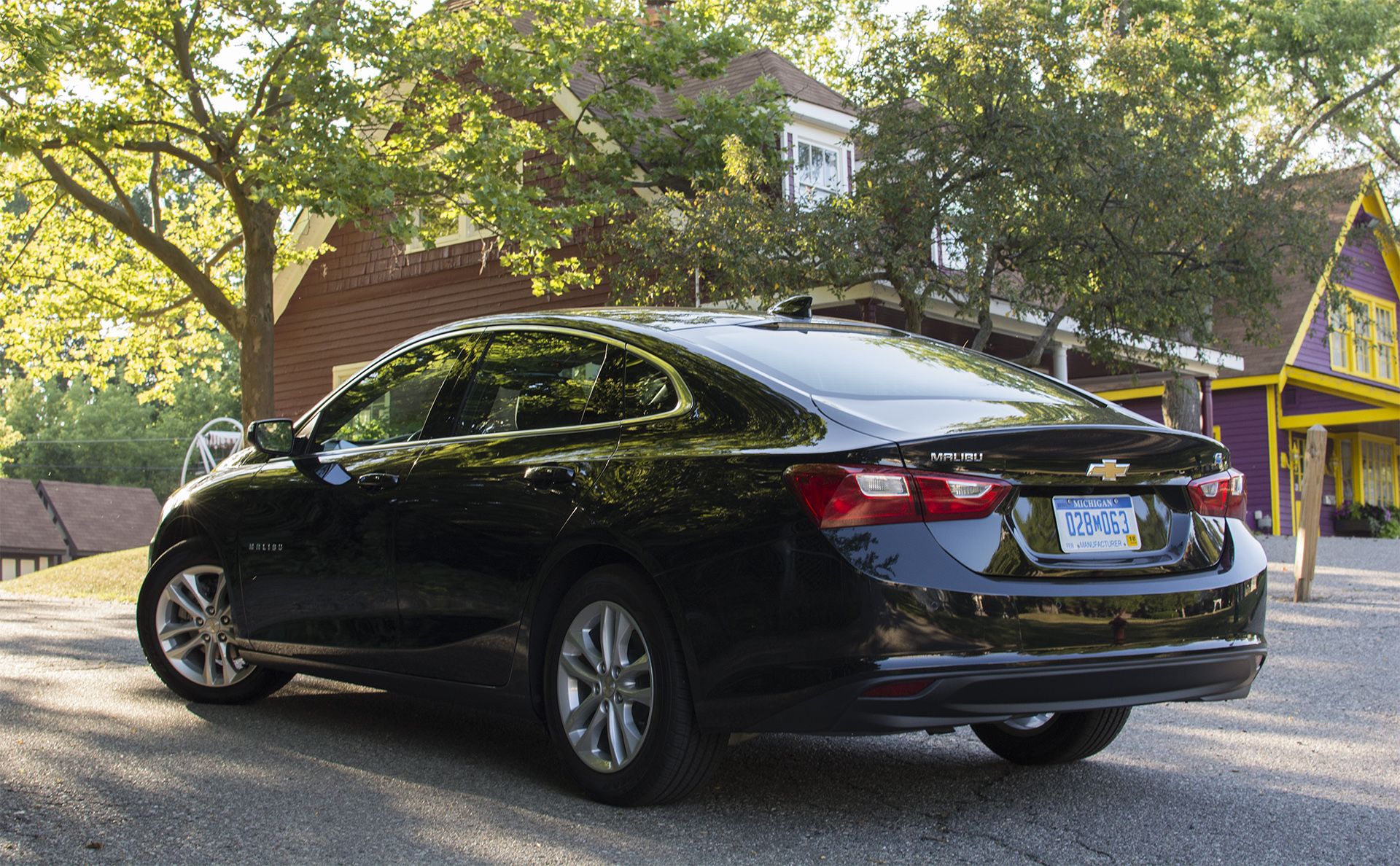 The Ford Fusion Hybrid is the sharpest looking midsize hybrid sedan on sale and is considered by many to have one of the best driving dynamics. However, the Fusion Hybrid trails the Malibu in fuel economy and performance. Kia's Optima Hybrid offers a lot of equipment for the money and a lower starting price, but fuel economy figures are slightly lower and the brakes don't feel linear. You may notice we don't have the Honda Accord, Hyundai Sonata or Toyota Camry Hybrid here. That's because all three have introduced redesigned versions that bring a number of improvements to the table. We hope to give you a better idea on these models in the near future.

The Chevrolet Malibu Hybrid is the new kid on the hybrid block and it makes a great first impression. A punchy powertrain, impressive fuel economy figures, competent chassis, and an exterior that doesn't scream hybrid shows how far Chevrolet has come. The downsides are small with limited trunk space, tight headroom and a high base price.

From zero to possibly one of the best hybrid sedans, the 2017 Chevrolet Malibu Hybrid is very much worth your consideration.